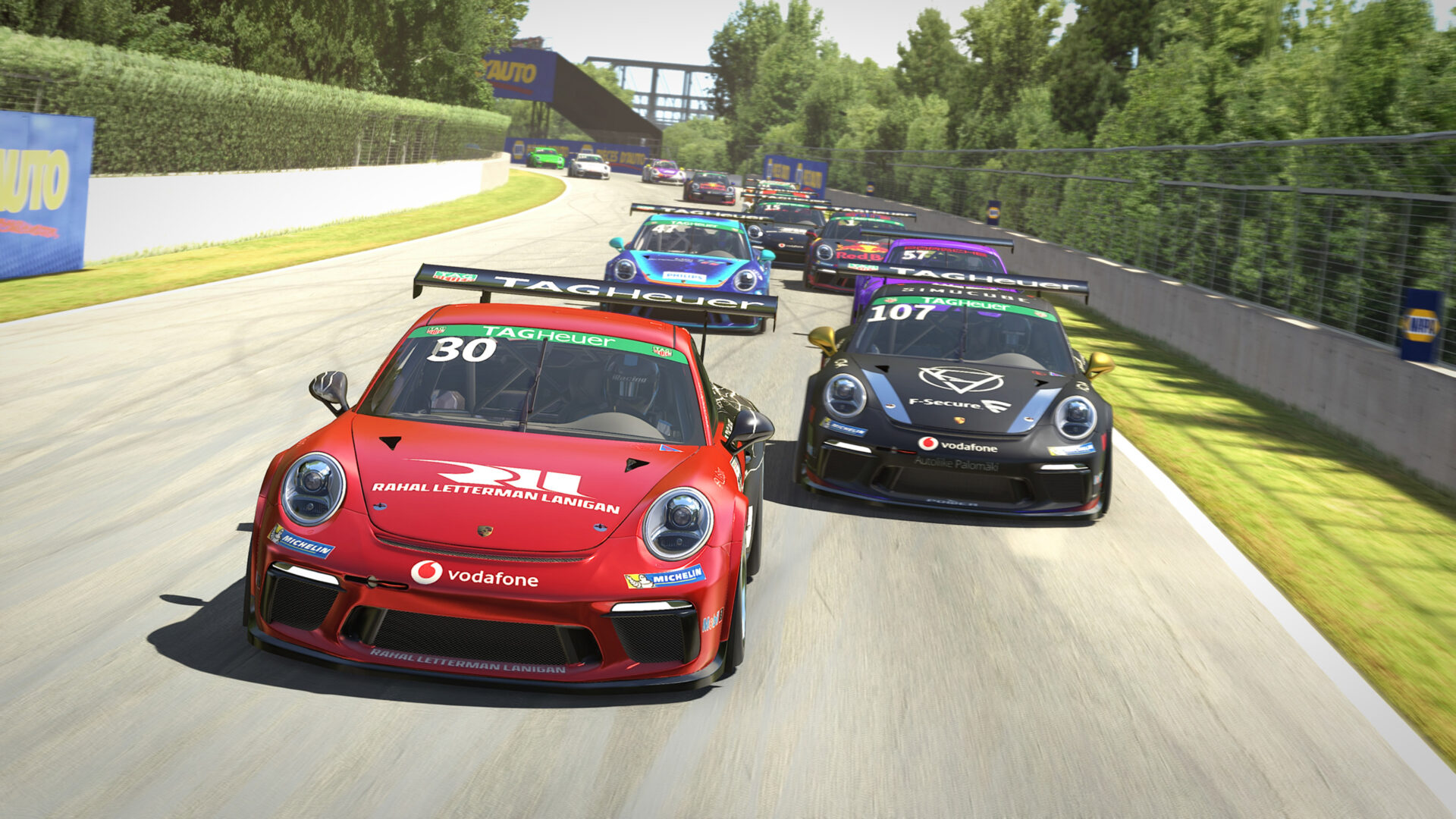 By Peter MacKayMarch 2, 2021No Comments

Circuit Gilles Villeneuve’s perilously narrow contours hosted the sixth round of the 2021 Porsche Tag Heuer eSports Supercup. Rahal Letterman Lanigan Esport (RLL) star, Kevin Ellis Jr., arrives at Montreal buoyed by another podium finish at Road Atlanta last time out. Zac Campbell left his home round at Road Atlanta frustrated by what could have been. Despite showing blistering pace at the Braselton circuit, Campbell was tangled in a race ending incident early in the feature. RLL’s Georgian ace headed to Montreal keen to settle the score.

In qualifying, Campbell rebounded from his Road Atlanta agony in style. Scoring his first career pole position in the Porsche Tag Heuer eSports Supercup, the #15 RLL Esport Porsche driver was back in business. Not to be outdone by his RLL colleague, Apex Racing Team’s Jamie Fluke booked third on the grid, his best of the season so far. 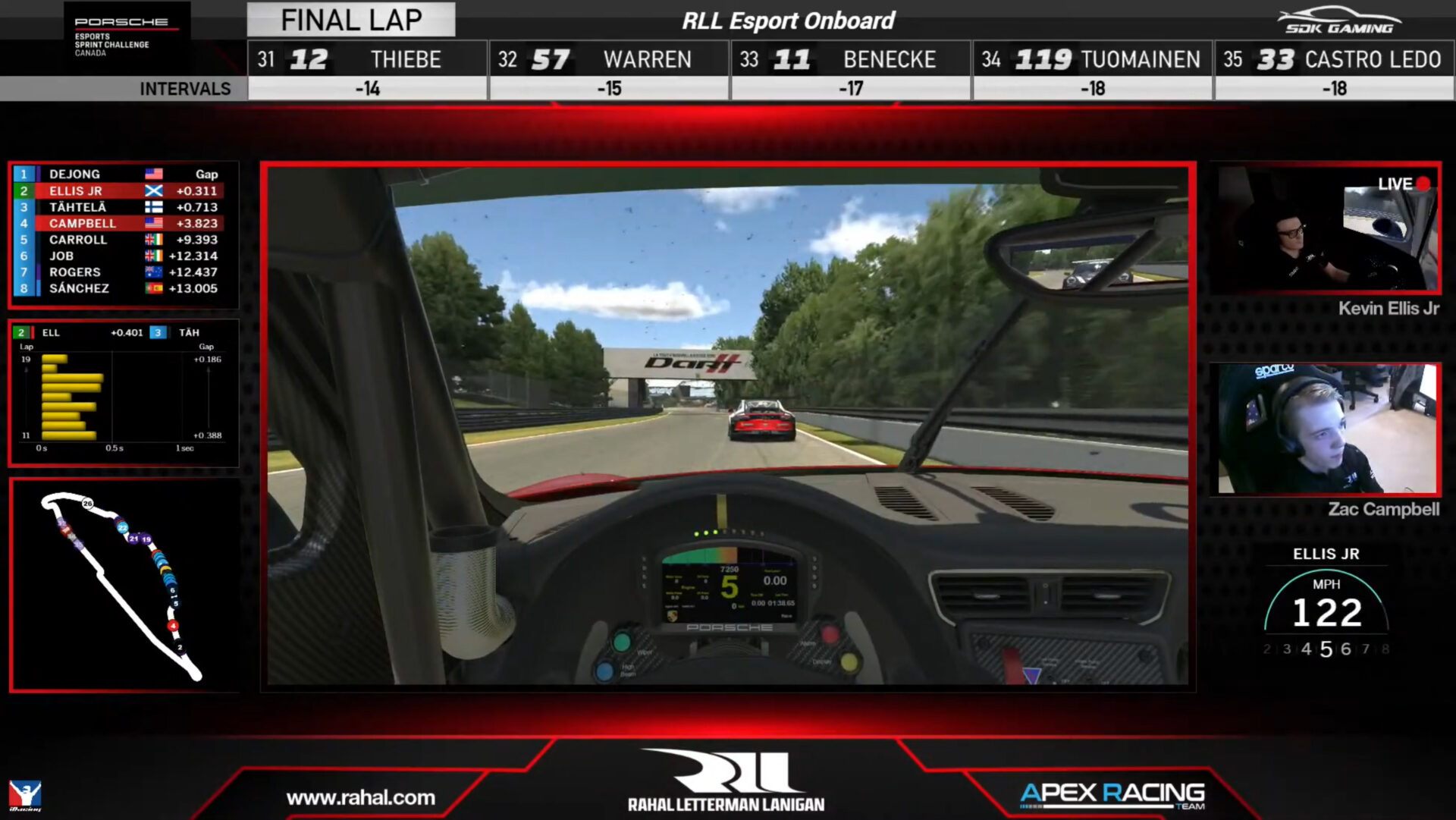 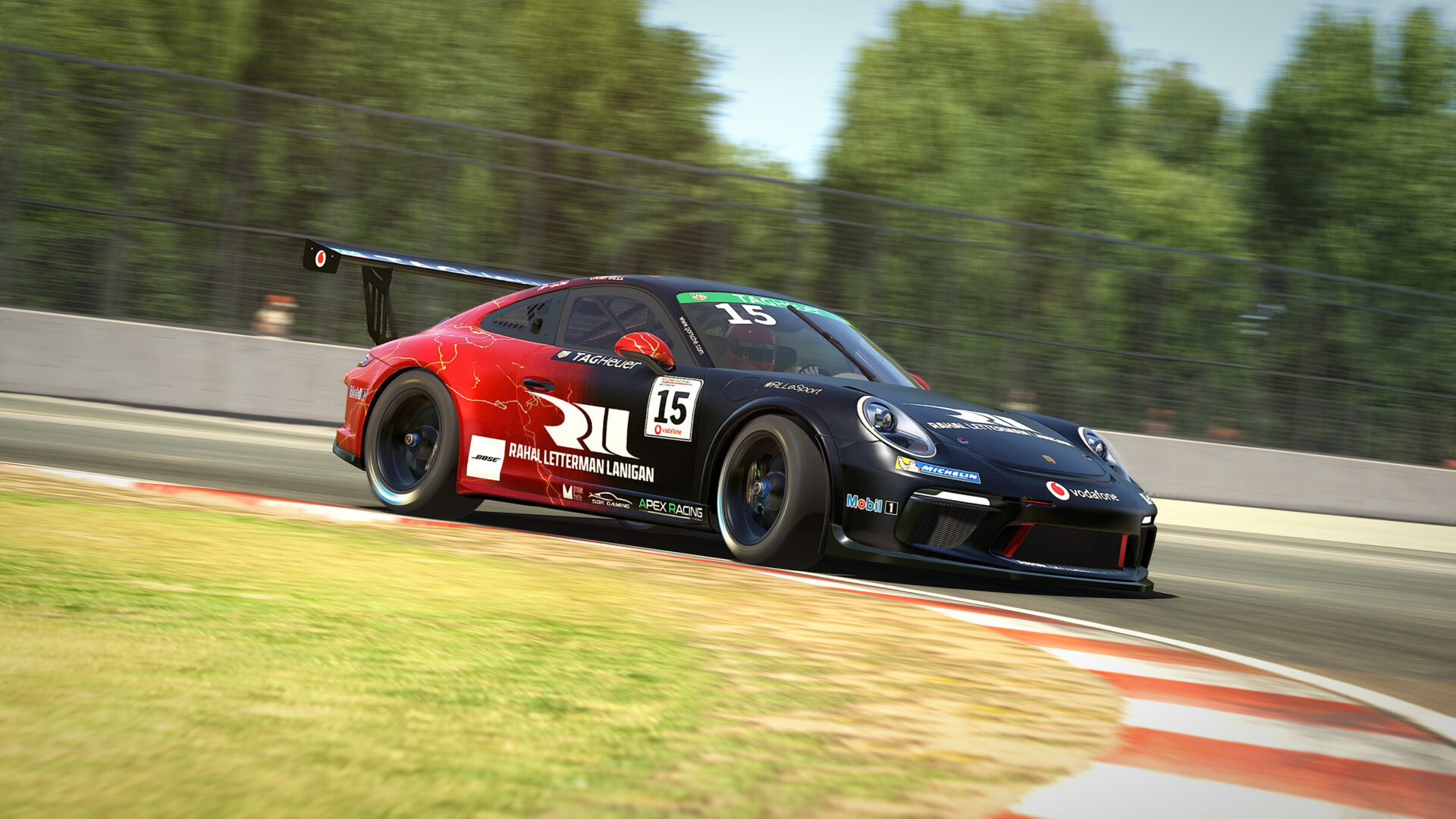 Qualifying eighth, Kevin Ellis Jr. ensured the #30 RLL Esport Porsche would be in the thick of the fight on the streets of Montreal. Yohann Harth backed up his extraordinary feature race charge in Atlanta by qualifying eighteenth. Harth’s ART stablemate, Jeff Giassi, struggled to hook up his Porsche 911 GT3 Cup in qualifying and started twenty-seventh.

Throughout the ten-lap sprint race, Zac Campbell exhibited his world class credentials. Going toe to toe with defending champion, Sebastian Job, the Lawrenceville star climbed the podium in third place. It cannot be forgotten that Campbell negotiated the strife and peril of prequalifying to earn his place in the Porsche Tag Heuer eSports Supercup. Let there be no doubt that Zac Campbell deserves his seat at sim racing’s top table.

King of consistency, Kevin Ellis Jr., progressed once again in the sprint race and finished sixth. Thus, grabbing a strong haul of points and a favourable second row grid spot for the feature event.

Apex Racing Team’s latest signing, Jeff Giassi, stunned the field in the sprint race. Charging from twenty-seventh to fifteenth, the Brazilian delivered his drive of the season to rescue a challenging qualifying session.

Jamie Fluke’s podium charge from third on the grid was thwarted on lap one of the sprint race. Light contact from behind at the second chicane sent Fluke’s Porsche spinning off track and tumbling to the bottom of the order.

From the second row of the grid, Kevin Ellis Jr. pushed through to second place on the opening lap. Crucially, Ellis Jr. made an early escape in a breakaway trio with leader Mitchell de Jong and Tuomas Tahtela. Throughout the twenty-lap encounter, Ellis Jr. bided his time in second place, shadowing Mitchell de Jong’s every move. 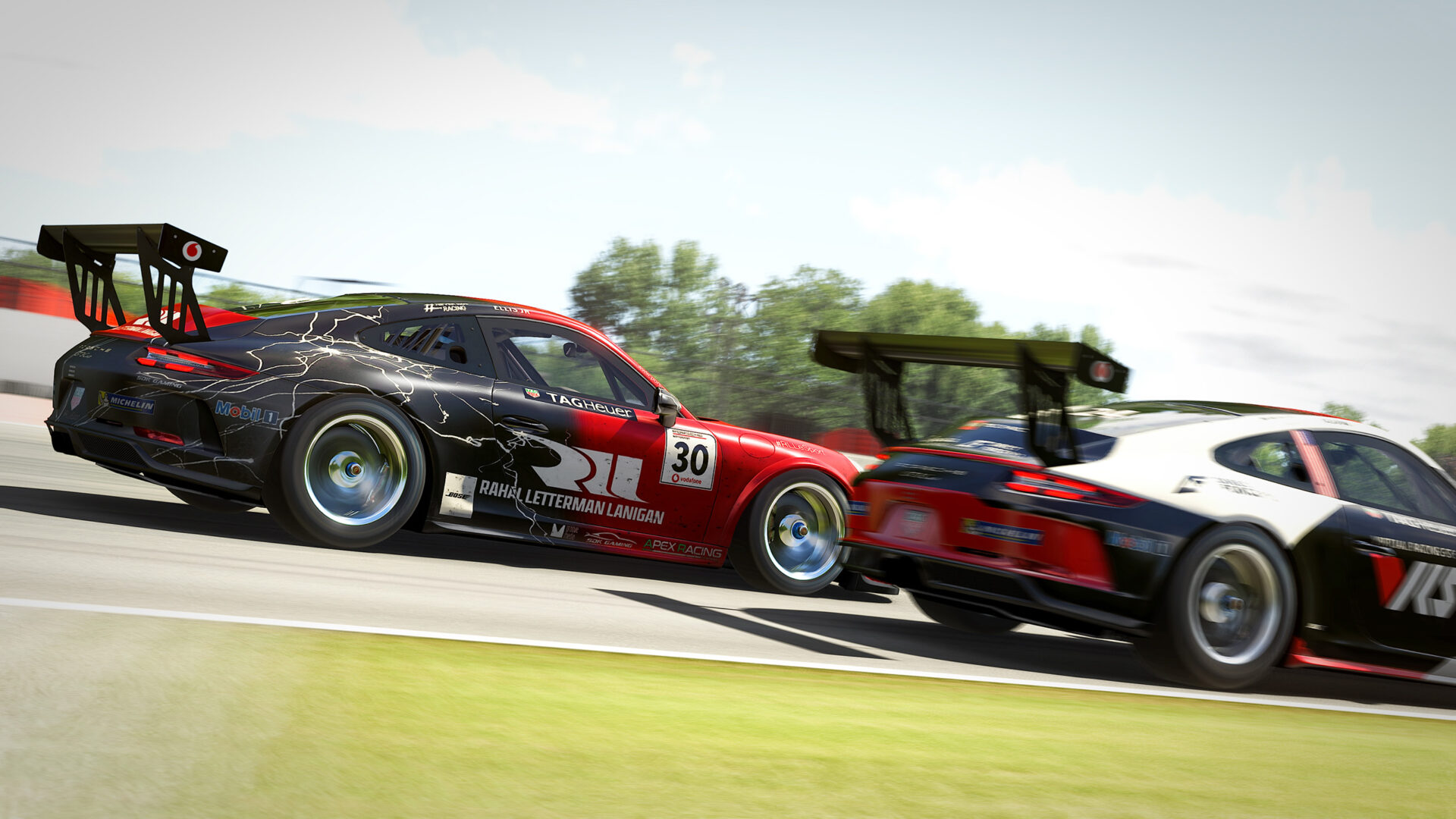 With two laps to go, Tahtela sprung a surprise attack on Ellis Jr. at the Senna S. However, the Glaswegian ace promptly returned the favour at the hairpin and reassumed second place.

Ellis Jr. embarked upon the final run up the Casino straight in the wheel tracks of de Jong’s Porsche. Approaching the final chicane, Ellis Jr. prepared to deploy a move but came up agonisingly short. De Jong would claim the win, but Ellis Jr. had bagged yet another podium to solidify his championship charge.

From sixth on the grid, Zac Campbell escaped an early melee and moved to fourth place by lap two. Unperturbed by the snarling pack of rivals immediately behind, Campbell brushed them aside with a flurry of lightening quick laps. Within a handful of laps, Campbell had built enough of a cushion on fifth place and cruised to his second top five finish of the day. 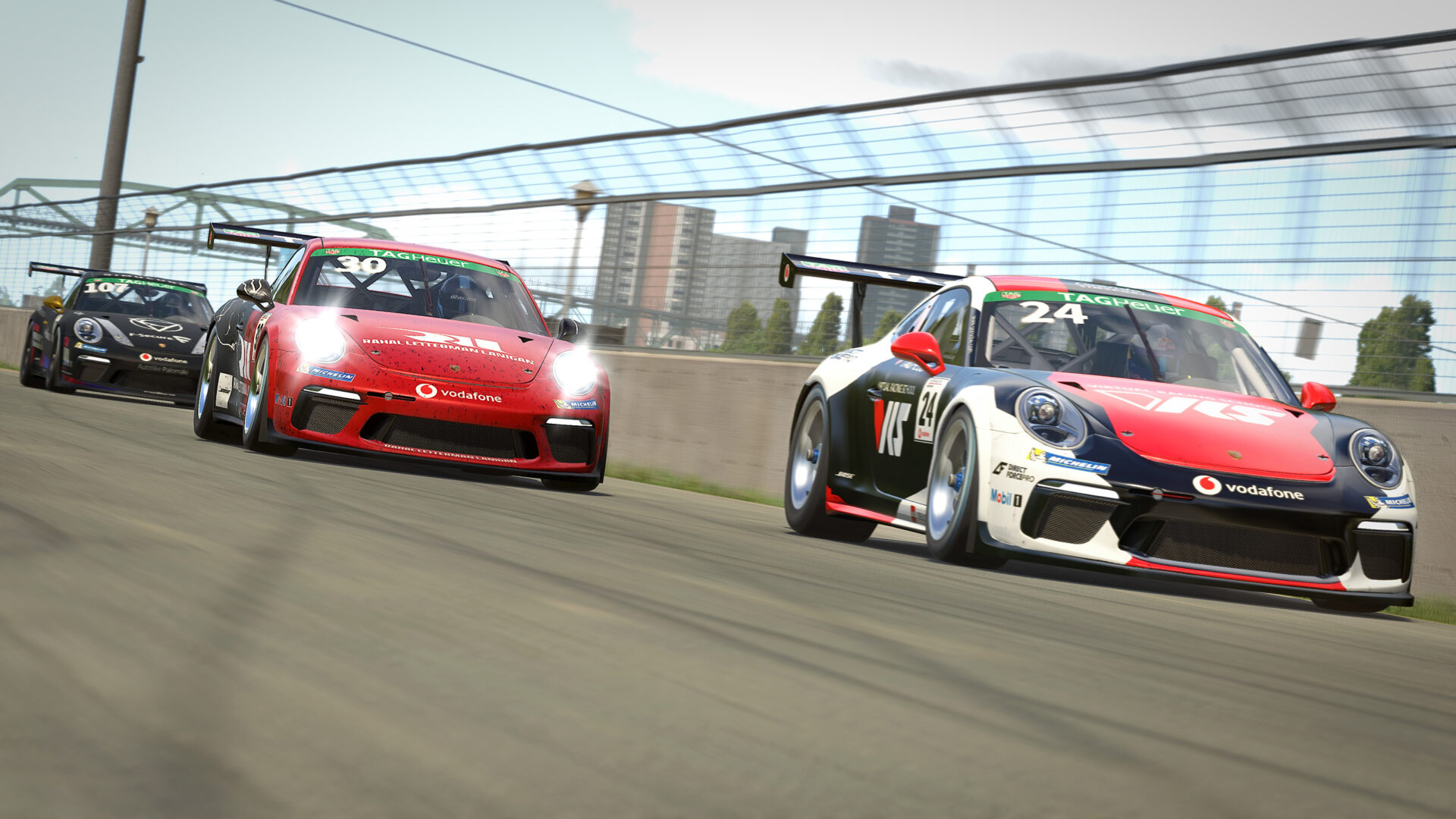 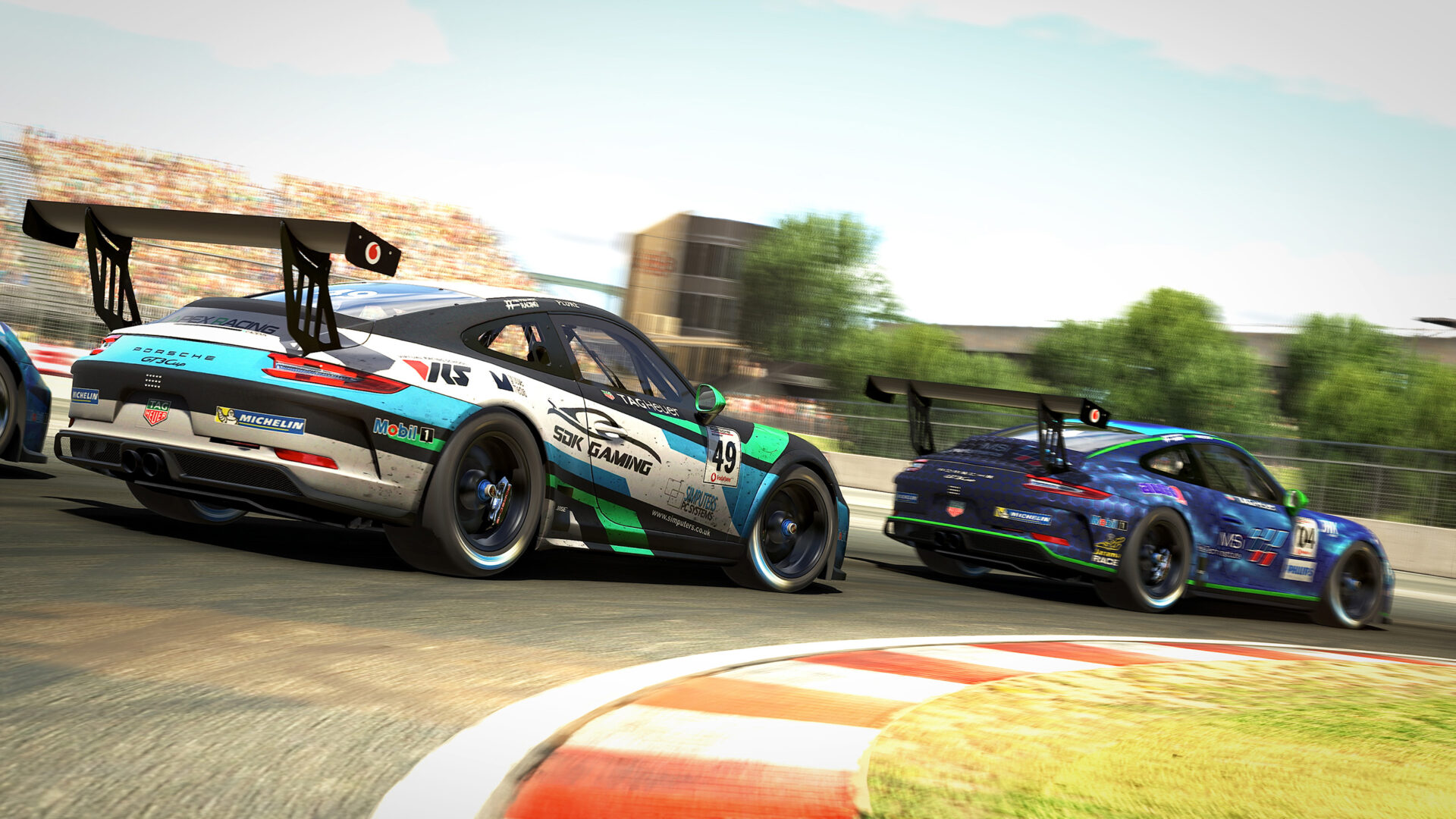 From deep in the pack, Jamie Fluke once again delivered a tenacious ascent to twelfth place. Following the disappointment of race one, Fluke has made a feature race charge his signature move.

Jeff Giassi couldn’t repeat his race one heroics after becoming innocently snarled in the lap one brawl. Eventually, Giassi limped his wounded 911 home in twentieth place.

After a disappointing race one, Yohann Harth progressed to twenty-second place.

Jamie Fluke: “A very frustrating day. I didn’t have any major expectations going into this race as Montreal has never been a happy hunting ground. I put in my best qualifying lap in probably a couple of years to somehow put it 3rd on the grid. From there, all hope was taken from me with getting tipped round in T3 on the first lap, putting me right to the back once again. From there I was able to maintain composure and worked my way back to 12th, just avoiding all the major incidents ahead. I would have taken 12th at the start of the day, but it’s a missed opportunity for a huge haul that I could definitely do with. The guys worked amazingly during the week, hopefully we can keep the positive momentum up!”

Yohann Harth: “Not much to say really… another 20 hours down the drain. Besides the Silverstone Feature race where everything was on me, I’ve been crashed out in 8 of the 12 races so far this season.
It was my worst Q lap in a long time but yet I was still in the fight for a Top 10 finish after the first few laps in the Sprint Race but people can’t just ride in line. When you run through the back of 5 different cars in the same round, you’ve got to ask yourself a few questions.” 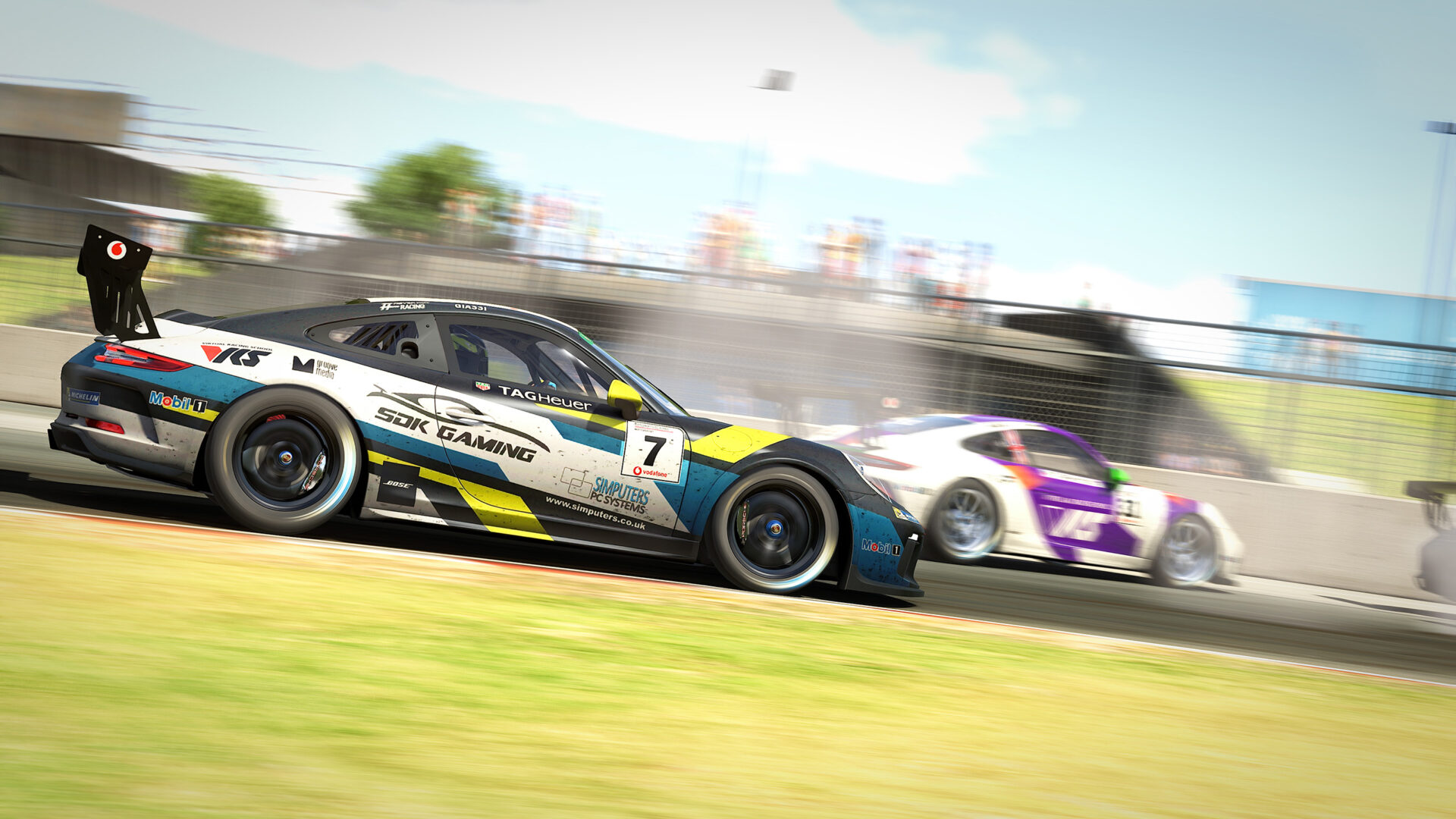 Kevin Ellis Jr.: “Another consistent, solid result this weekend at the one track I was really dreading the most coming into this season! Zac did an awesome job grabbing our first ever pole position in series history and I managed to avoid incidents in the Sprint race for P6 to then reverse to P3 for the start of the Feature race. Made sure to get to P2 as soon as possible as I felt stronger than Tuomas in the Sprint so wanted to control Mitchell in front and be the first beneficiary of any mistakes he may have made.

Passing was super tough just through the lack of visibility behind a car so was really tough to get close enough to Mitchell to make a send into the hairpin without me risking a slowdown or hitting him from too far back and causing contact. I just played it patient, dropped to 3rd with 2 to go after a mistake from Mitchell but the outside at turn 2 just wasn’t good enough and Tuomas got by. I quickly sent him back into the hairpin coming to the white flag but Mitchell was too far ahead to do anything.

However my 4th podium from 6 races is a mega stat this season and I’ve also jumped to 3rd in points!! Looking forward to a short break to reset and come back stronger than ever for Spa!

Zac Campbell: “Saturday was fantastic, especially in the context of the last two weekends, it went about as well as possible. I couldn’t believe being on pole position, and I can at least say I’ve led 1 lap in the Porsche Tag Heuer eSports Supercup! I made a mistake at the beginning of the sprint that in retrospect put me in a much better position in the feature, but it’s shame we lost so much time at the beginning of the feature battling with Seb, Josh, Dayne and Alex because I think we had the pace to challenge for the win today. Not a regret though, it’s amazing to have a result like that and I’m so proud of everyone on the team and the opportunities they give me. I hope we can have more weekends like this going forward!”

On the thirteenth of March, Rahal Letterman Lanigan Esport and Apex Racing Team’s fast five take to the iconic curves of Spa Francorchamps for round seven of the championship.