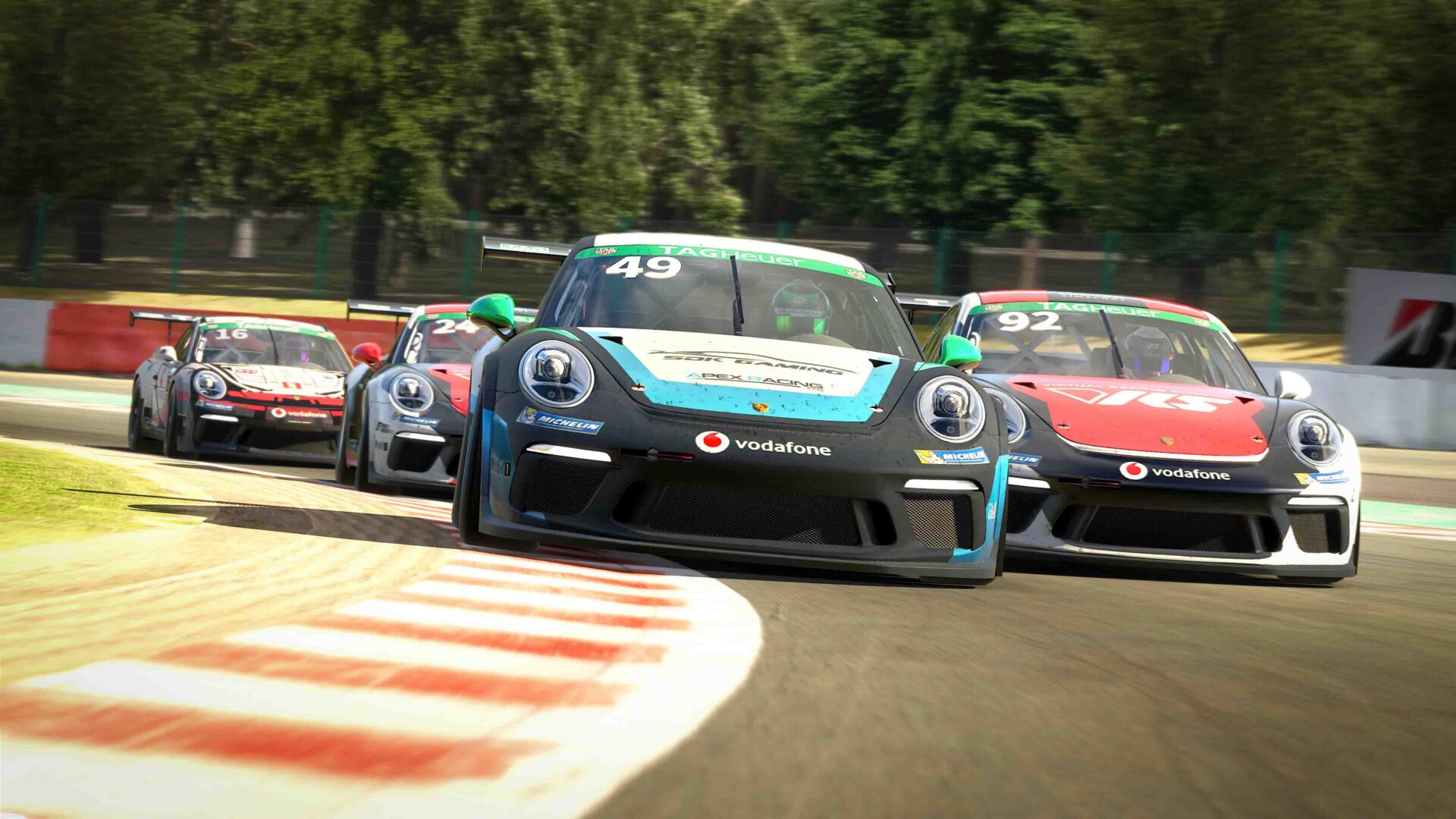 ART and RLL run up front in Spa spectacular!

At a circuit where track limits are rigorously enforced by iRacing’s automatic system, absolute precision would be vital during qualifying. Apex Racing Team’s (ART) brilliant Brazilian, Jeff Giassi, led the ART/RLL gang in ninth overall. Joining Giassi at the sharp end of the grid, were Zac Campbell, Jamie Fluke and Yohann Harth. A tough qualifying session for championship contender Kevin Ellis Jr. left the RLL star back in sixteenth. 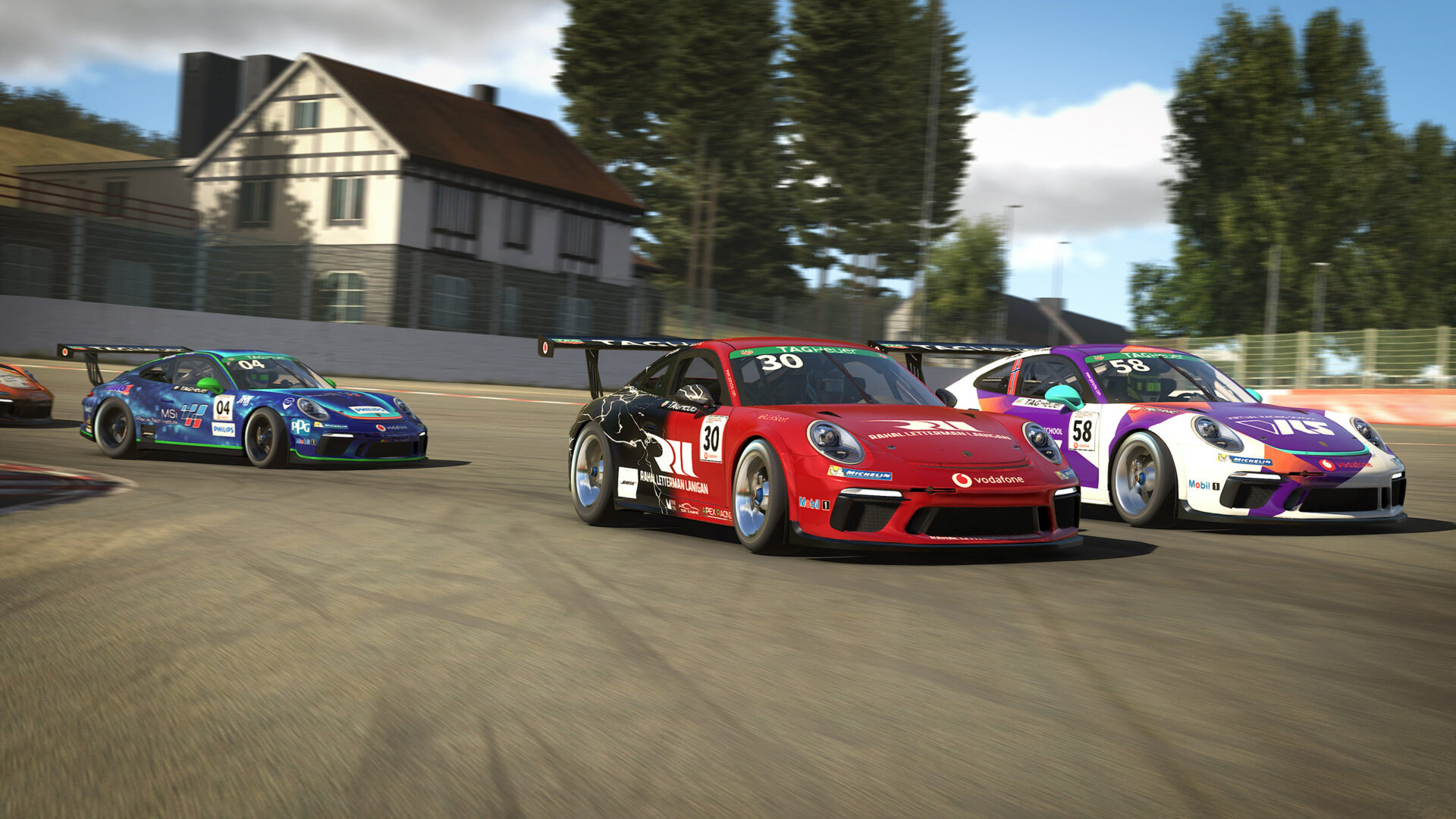 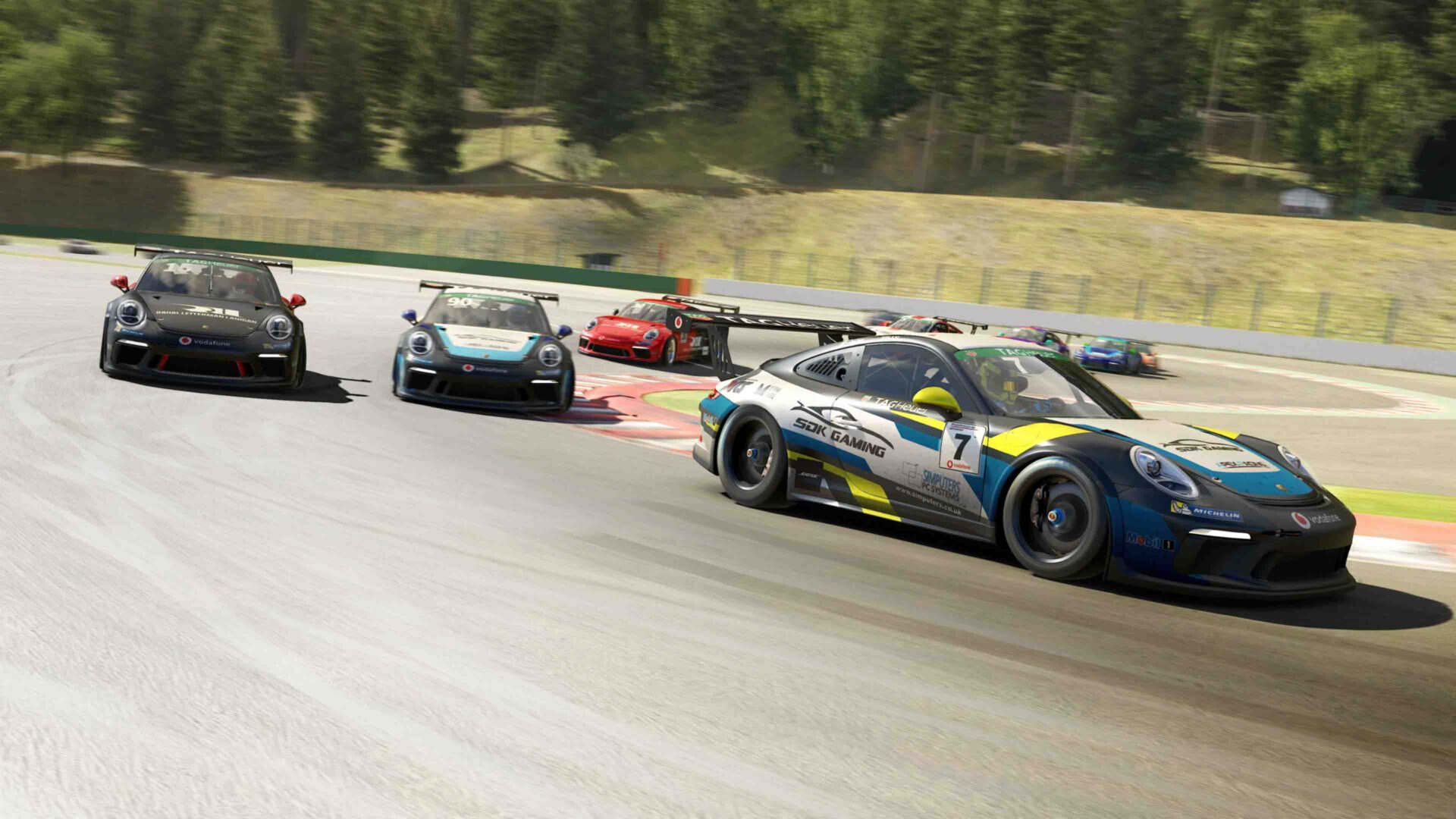 Throughout the opening six lap encounter, the ART/RLL alliance moved up the field en masse. Jeff Giassi converted a superb qualifying run into a seventh-place finish and started on the front row for the feature race. RLL superstar Zac Campbell followed immediately behind Giassi, backing up his Montreal magic two weeks ago. Campbell also secured pole position for the feature race.

Yohann Harth proved once again that when given a clear run, the Frenchman can run with the world’s best. Finishing behind Harth in tenth, was the resurgent Kevin Ellis Jr. Refusing to let a difficult qualifying dampen his resolve, the Glaswegian star rose through the pack with gusto.

From pole position, Zac Campbell led the snarling forty car field down to Eau Rouge and up the Kemmel straight to les combes. Approaching the right-left chicane, Ayhancan Guven made his move for the lead between Campbell and Giassi. However, light contact triggered a colossal pile up. Tapped onto the grass, Zac Campbell managed to re-join in fourth. Giassi wasn’t so fortunate and was swept into the barriers by Guven’s errant 911. 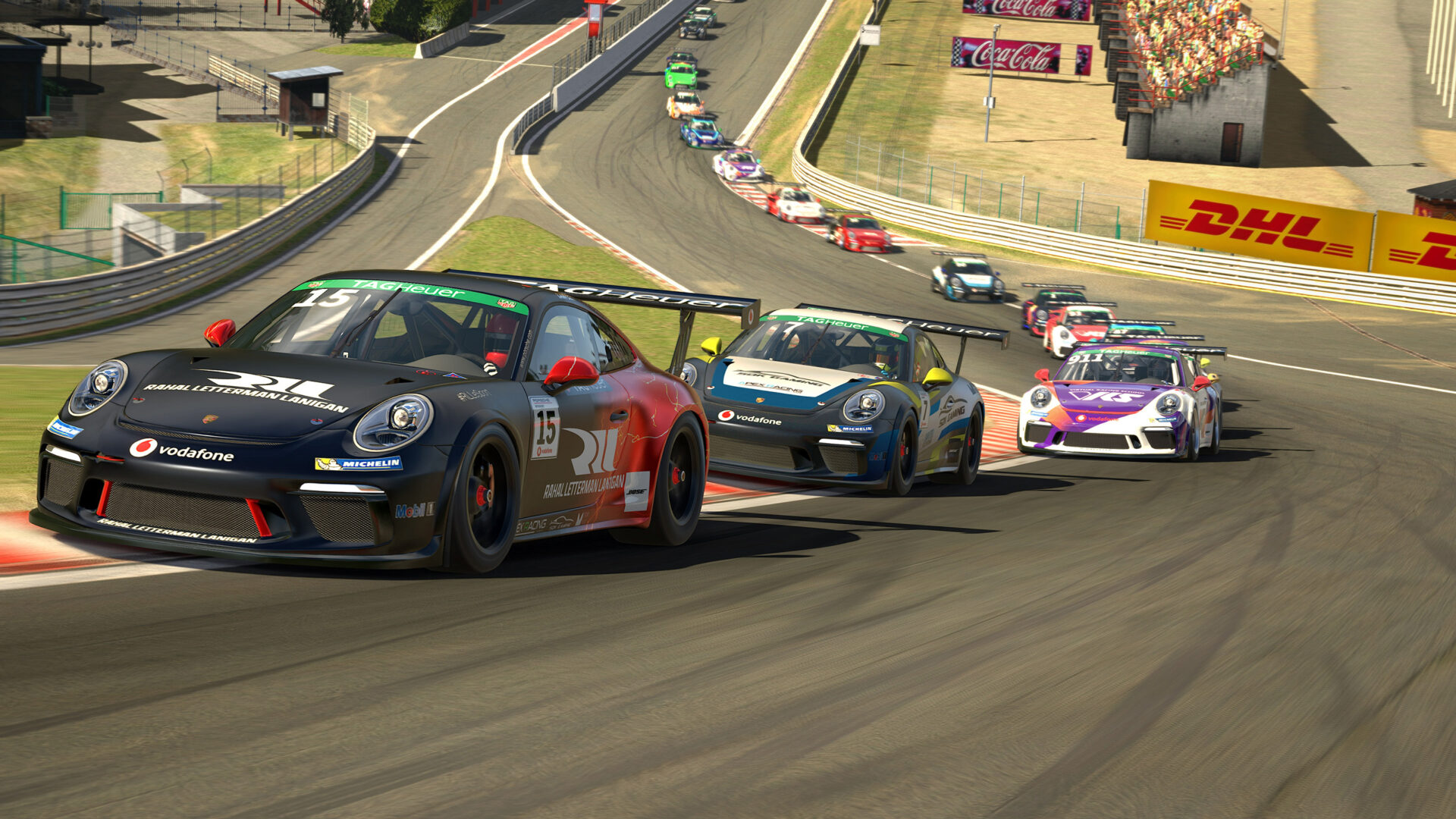 Yohann Harth and Kevin Ellis Jr. capitalised on the calamity ahead and moved to the fringes of the top five early on. Unfortunately, Ellis Jr’s impressive charge was thwarted at La Source at half race distance. A light nudge under braking from Charlie Collins sparked a domino effect which eventually sent Ellis Jr’s RLL Porsche into a twirl and tumbling down the order. Having been caught in the same incident, Yohann Harth eventually recovered to tenth overall, confirming an impressive double top ten finish at Spa. Crucially, Harth now sits inside the top twenty in the championship. If the iRacing World Rallycross champion can maintain or improve upon this, an automatic entry to next season awaits. 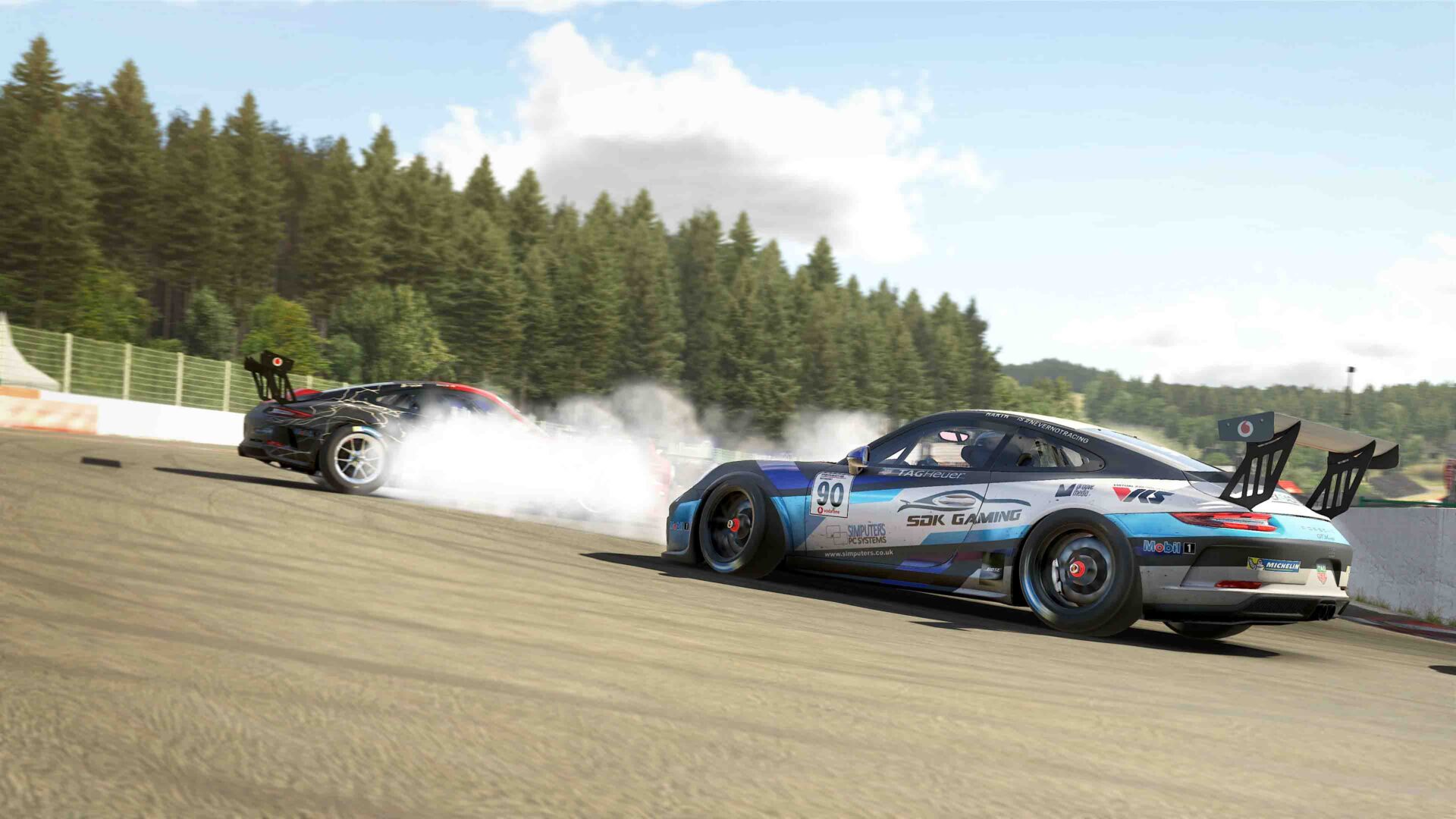 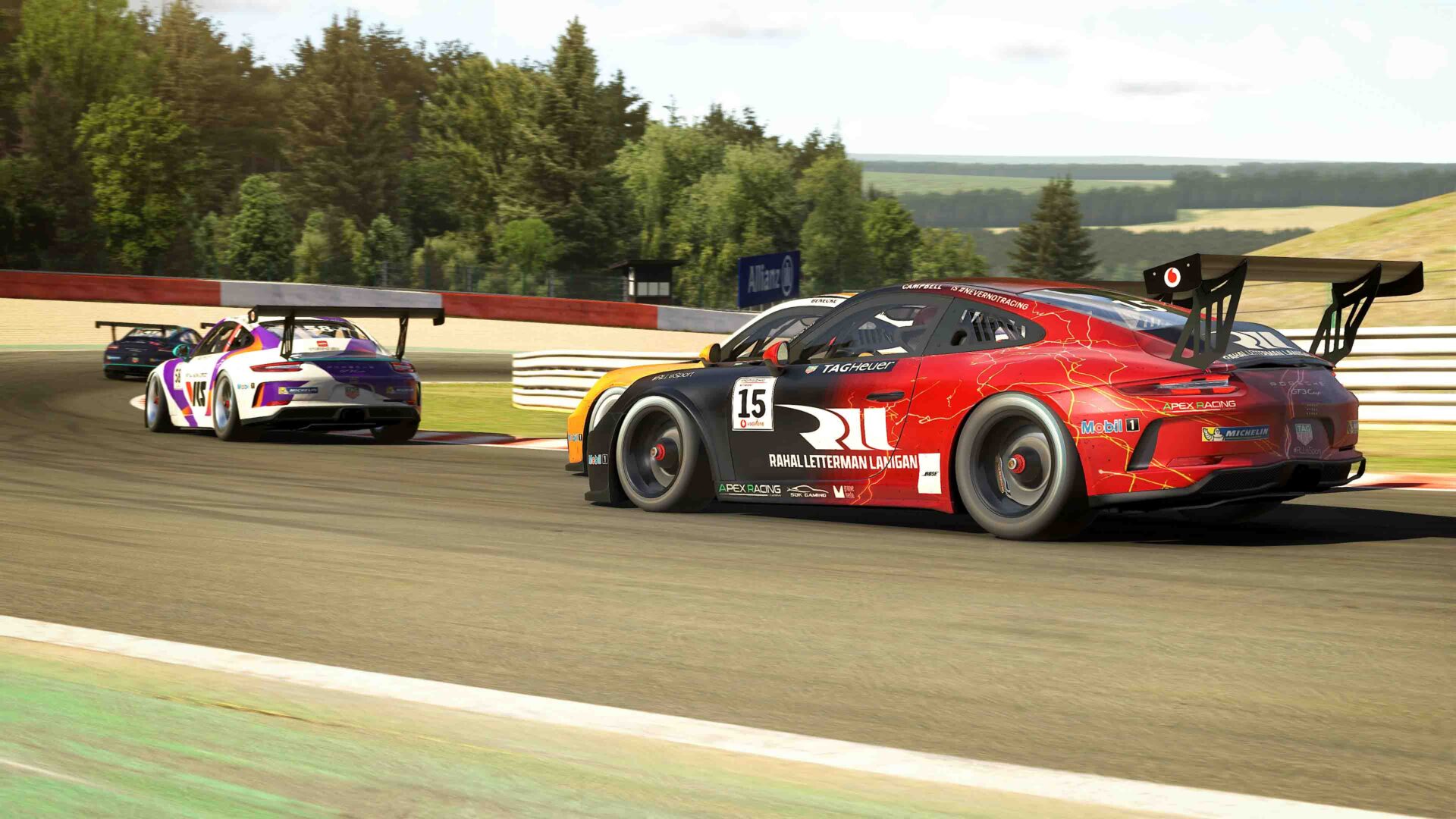 In the closing laps, Zac Campbell squared up to Max Benecke, Tommy Ostgaard and Charlie Collins in a tussle over fourth place. Eventually, Campbell settled for sixth place and a strong haul of points in what has been a standout rookie campaign. Now tenth in the standings, Campbell looks set to avoid the peril of pre-qualifying which he negotiated to gain his 2021 grid spot.

Jamie Fluke finished the eventful feature race in seventeenth and repeated his top twenty finish in race one. Fluke’s finishes ensure that all five ART/RLL stars sit within the top twenty in the championship with three rounds remaining.

Jamie Fluke: “Once again, not the result I was hoping but this time it was entirely self-inflicted. A reasonable qualifying lap put me just outside the top 10 but an error with my clutch meant a terrible launch off the start of the sprint race, and I was on the back foot from there. I struggled much more with the balance of the car than expected, and so fell back to 18th. In the feature race, I was chugging along a bit better but was still struggling in key parts of the track and so was on the back foot again most of the race. Unfortunate contact with another car demoted me back to where I had started, and finally ended up 17th. There was room for a lot better had I performed in the races, so there’s plenty of work to do between now and the next race at the Nurburgring Nordschleife.”

Yohann Harth: “It’s been a long time since I got to finish a weekend relatively unscalled, double top 10 feels good after the last couple of rounds. After that contact with Collins sending me into Kevin in the Feature, I was 2 incident points away from a drive through penalty. That’s my only regret, 2 incidents points with 6 laps to go at Spa Francorchamps, the only thing I could do was bring the car home. If I had a little buffer I’m fairly sure I would have hold on to P7.
Nordschleife next, we’re back in the top 20, I’m feeling it” 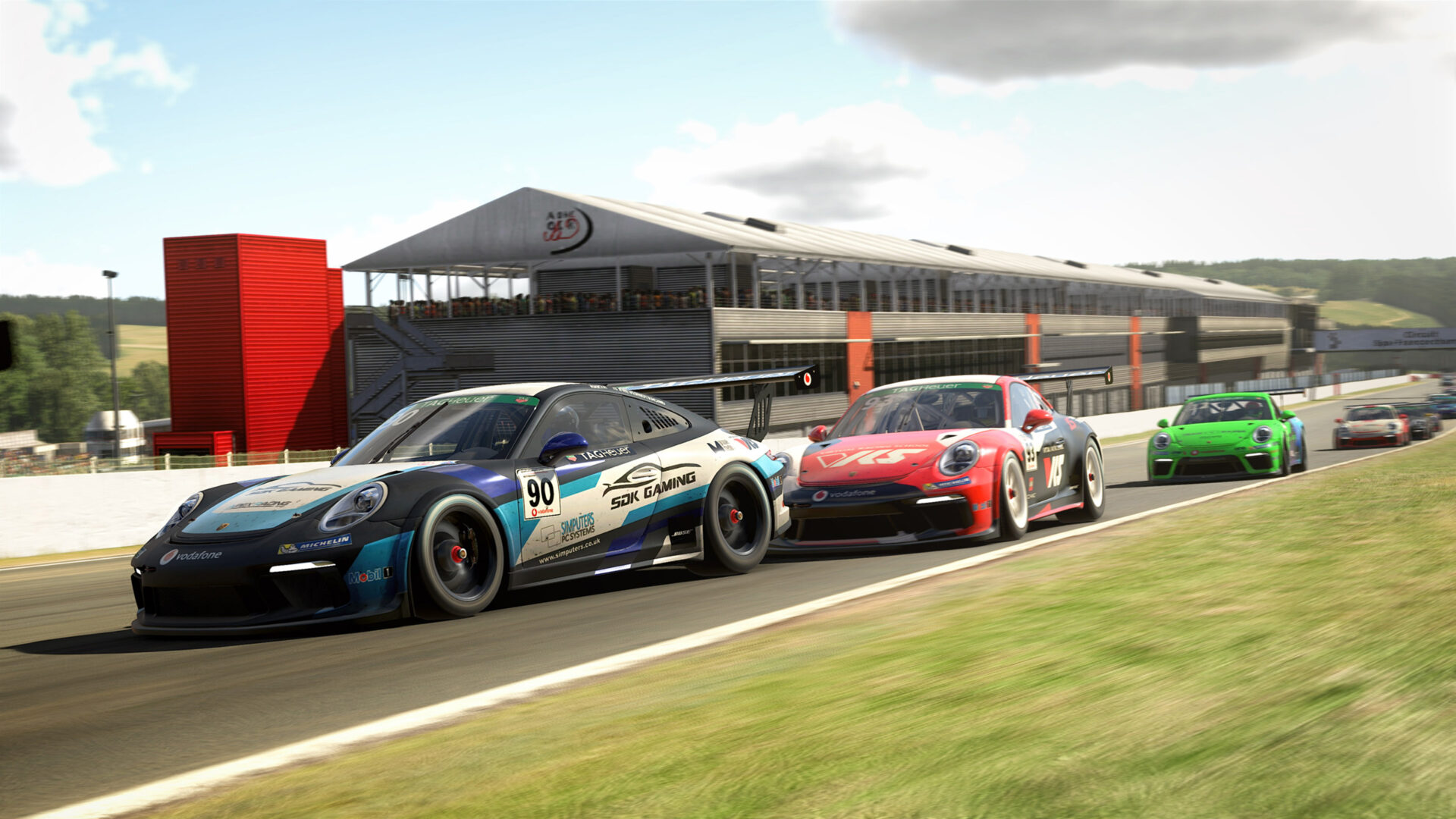 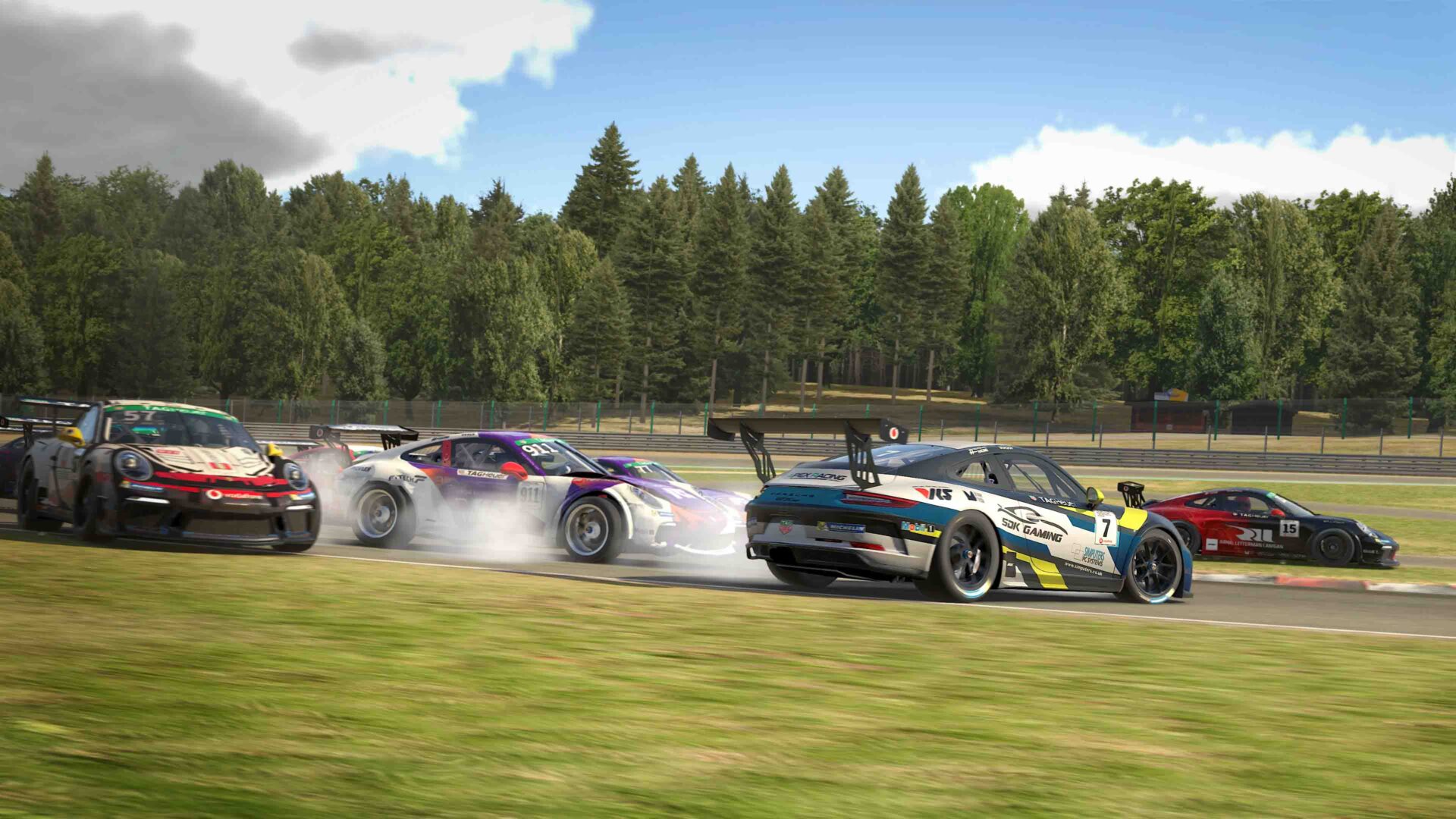 Jeff Giassi: “This weekend at Spa was a big mix of emotions. After a good qualifying that got me to start inside the Top 10, I could find myself driving in P7 coming up to the checkered flag, getting my reverse front row for the Feature Race.
As soon as the Feature race started, I was feeling confident driving in P2 until a collision ended up collecting several cars, including mine and took me out of the race in lap 1.
It’s tough but in the end it still part of the sport. I’m happy to say I’m more than proud of being on the front instead of thinking about what could have happened.
Surely, I’ll keep doing my best to come back strong for the next 3 final rounds.”

Zac Campbell: “Saturday went real well I thought, considering where I was all week. Spa was a massive struggle for myself just to get myself up to pace, and it really left me just going into Saturday wanting any sort of points. I didn’t expect to be bestowed reverse grid pole for sure! I hate that Lap 1 had to go the way it did, but it’s racing. After that accident the car was just a dog in a straight line, and I couldn’t even keep up in draft, so I was just about salvaging at that point. I’m really happy with how Saturday went nonetheless, but I definitely feel like there could’ve been a bit more on the table.”

The notorious Nurburgring Nordschleife awaits the Rahal Letterman Lanigan and Apex Racing Team squad for round eight of the Porsche Tag Heuer eSports Supercup. A circuit lauded and feared in equal measure, the Eifel region venue poses a brutal challenge to the world’s best sim racers.

Watch live on Apex TV or our Twitch Channel