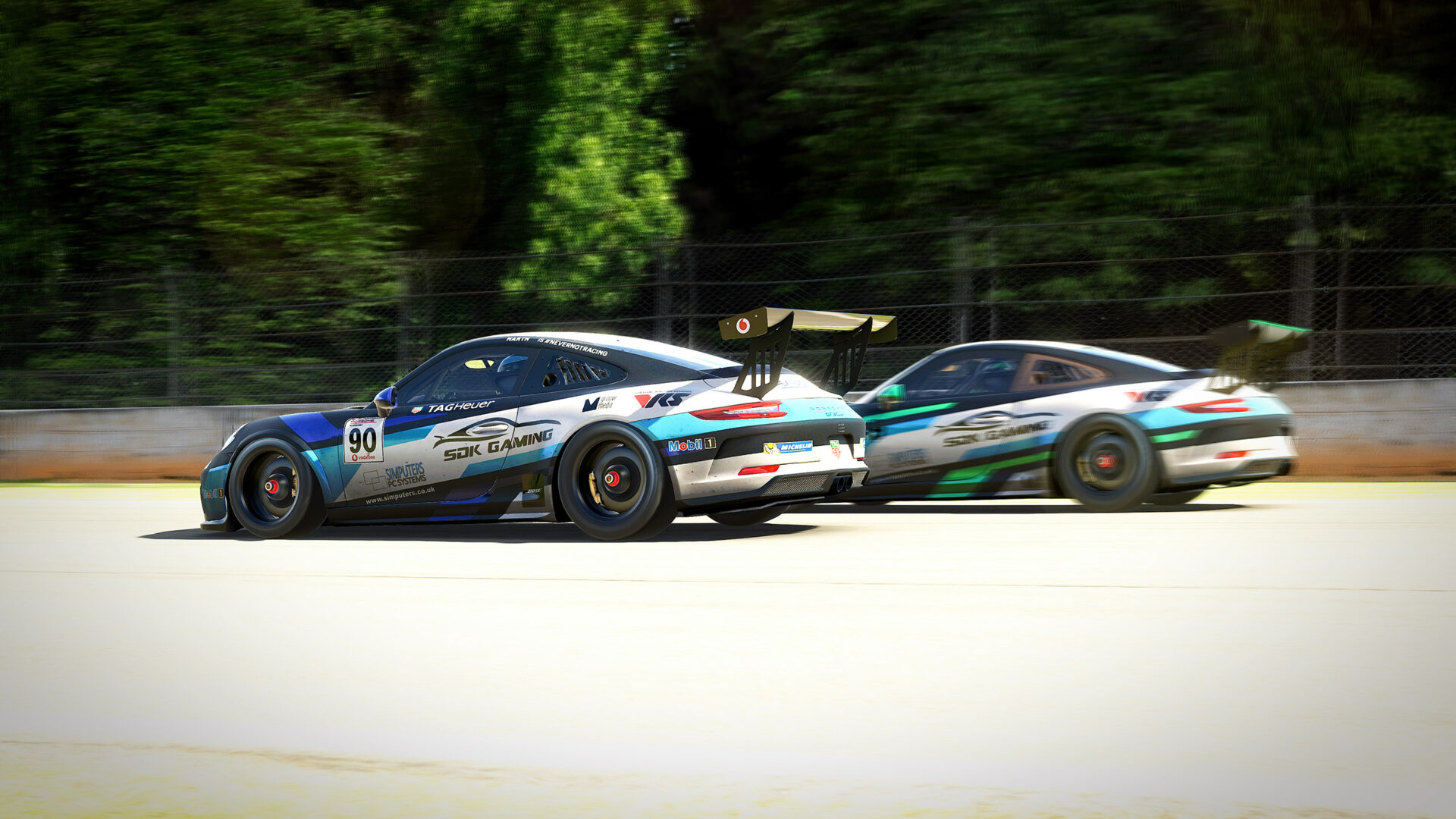 By Peter MacKayFebruary 27, 2021No Comments

RLL and ART strike back in Atlanta!

Rahal Letterman Lanigan Esport (RLL) and Apex Racing Team’s (ART) quick quintet arrived at round five of the Porsche Tag Heuer eSports Supercup ready for a fight. After a challenging round at Silverstone a week ago, Zac Campbell, Kevin Ellis Jr., Jamie Fluke, Yohann Harth and Jeff Giassi left nothing to chance in their exhaustive preparations for two races at Road Atlanta.

So far this season, qualifying has been critical to success in the iRacing Porsche Tag Heuer eSports Supercup. Nowhere in either the real or virtual world is there a more tightly contested series. Therefore, any advantage to be gained in qualifying is vital. 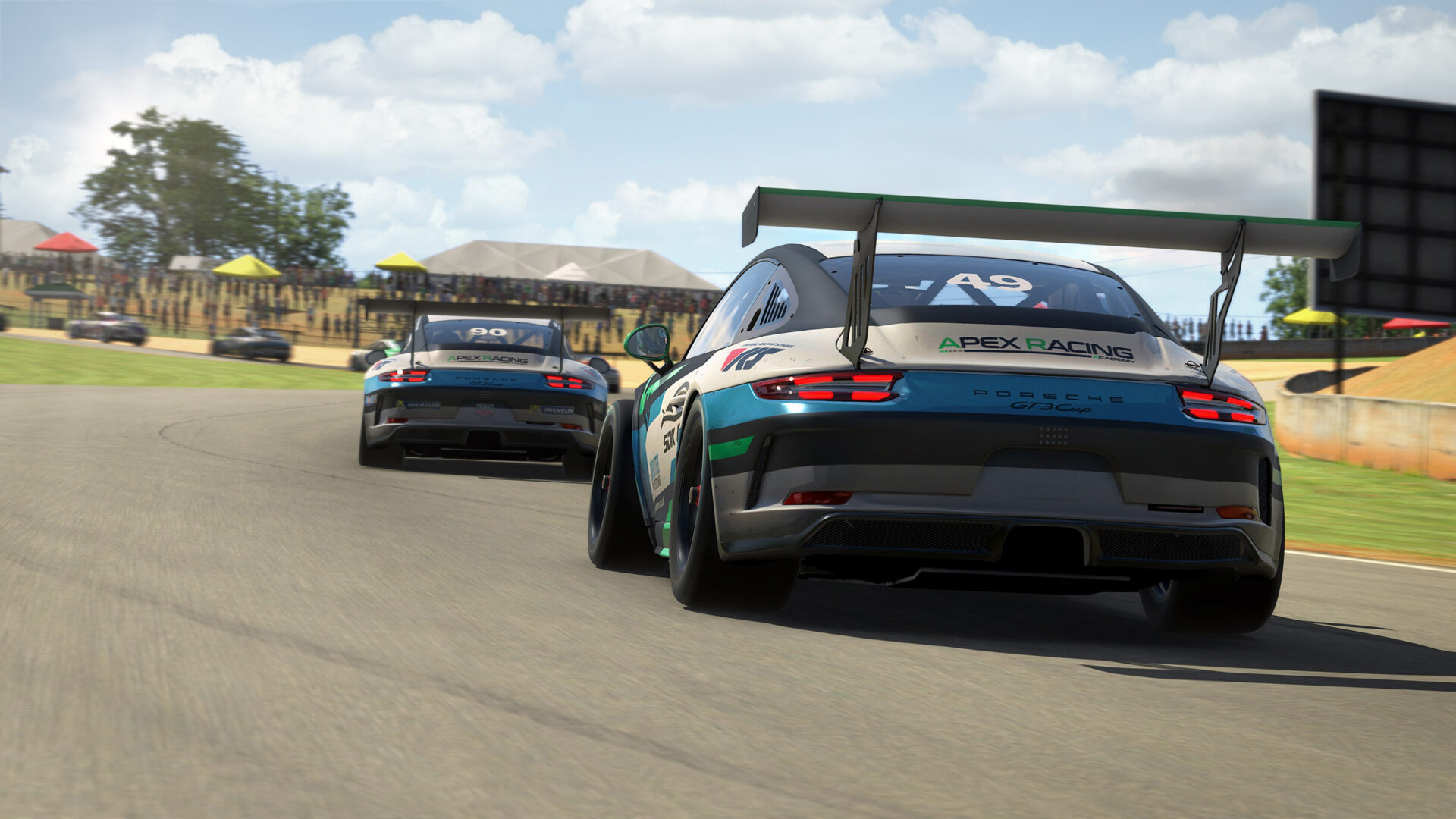 Kevin Ellis Jr. continued his impressive 2021 season by qualifying two tenths of a second from pole position and seventh overall. ART’s brilliant Brazilian, Jeff Giassi, showed his class and claimed his first top ten start of the season. One place behind Giassi, was RLL Esport star Zac Campbell. In fifteenth place, Jamie Fluke completed the RLL/ART qualifiers. Unfortunately, Yohann Harth had to serve a post-race penalty from Silverstone and started from the back.

This season’s rate of attrition has been astoundingly high. Therefore, an eerily calm opening sprint race came as a surprise to fans watching around the world, but perhaps a relief to the forty drivers fighting for track position.

Nudging up one place in his #30 RLL Porsche, Kevin Ellis Jr. confirmed a second-row grid spot for the twenty-lap feature race. Ellis Jr’s RLL stablemate, Zac Campbell, also progressed to tenth place. However, Campbell wasn’t quite able to show his pace on his home track, which perhaps deserved a higher finish.

After eight frustrating races, Jeff Giassi finally got his chance to show his star credentials and finished eleventh overall. Giassi’s ART colleague, Jamie Fluke, progressed to fourteenth. Frustratingly, Yohann Harth was mired in the mid pack melee, but his best was to come in the feature race.

From third on the feature race grid, Kevin Ellis Jr. threaded the needle down Road Atlanta’s snaking S bends, squeezing past David Williams for second place. Unperturbed by the gang of Coanda sim sport cars surrounding him, Ellis Jr. set off in hot pursuit of the leader, Tommy Ostgaard.

Ellis Jr. soon swarmed Ostgaard, looking for any opportunity to pass. On lap seven, Ellis Jr. made his move at turn ten and surged past Ostgaard on the brakes in the first of many exchanges for the lead. 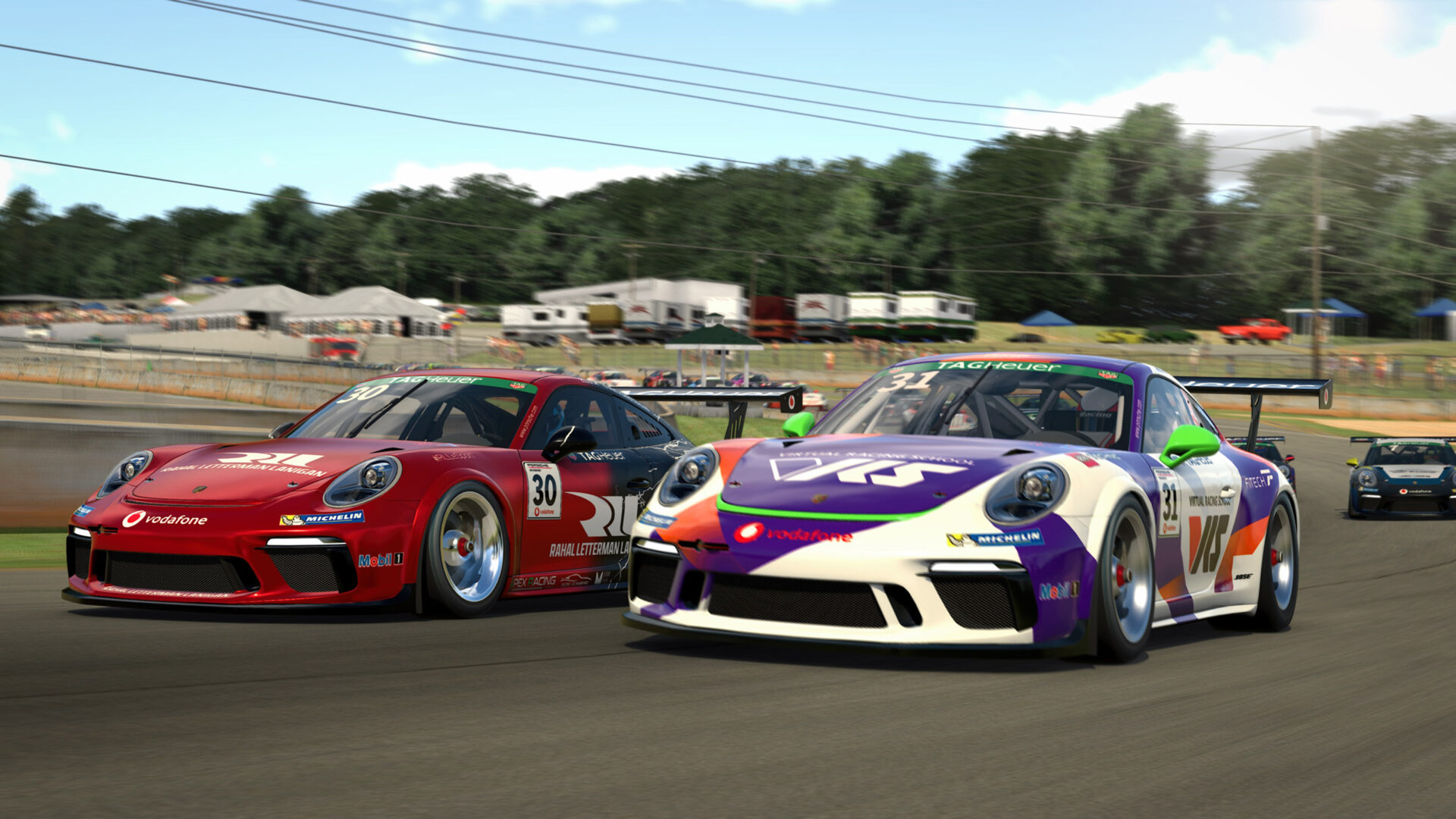 Zac Campbell’s impressive day capitulated in dramatic fashion at turn eleven on lap eight. A multi car pile up snarled the American star and ended his day once again. Unfortunately, Jeff Giassi couldn’t avoid the carnage entirely, but was able to continue with minor damage. 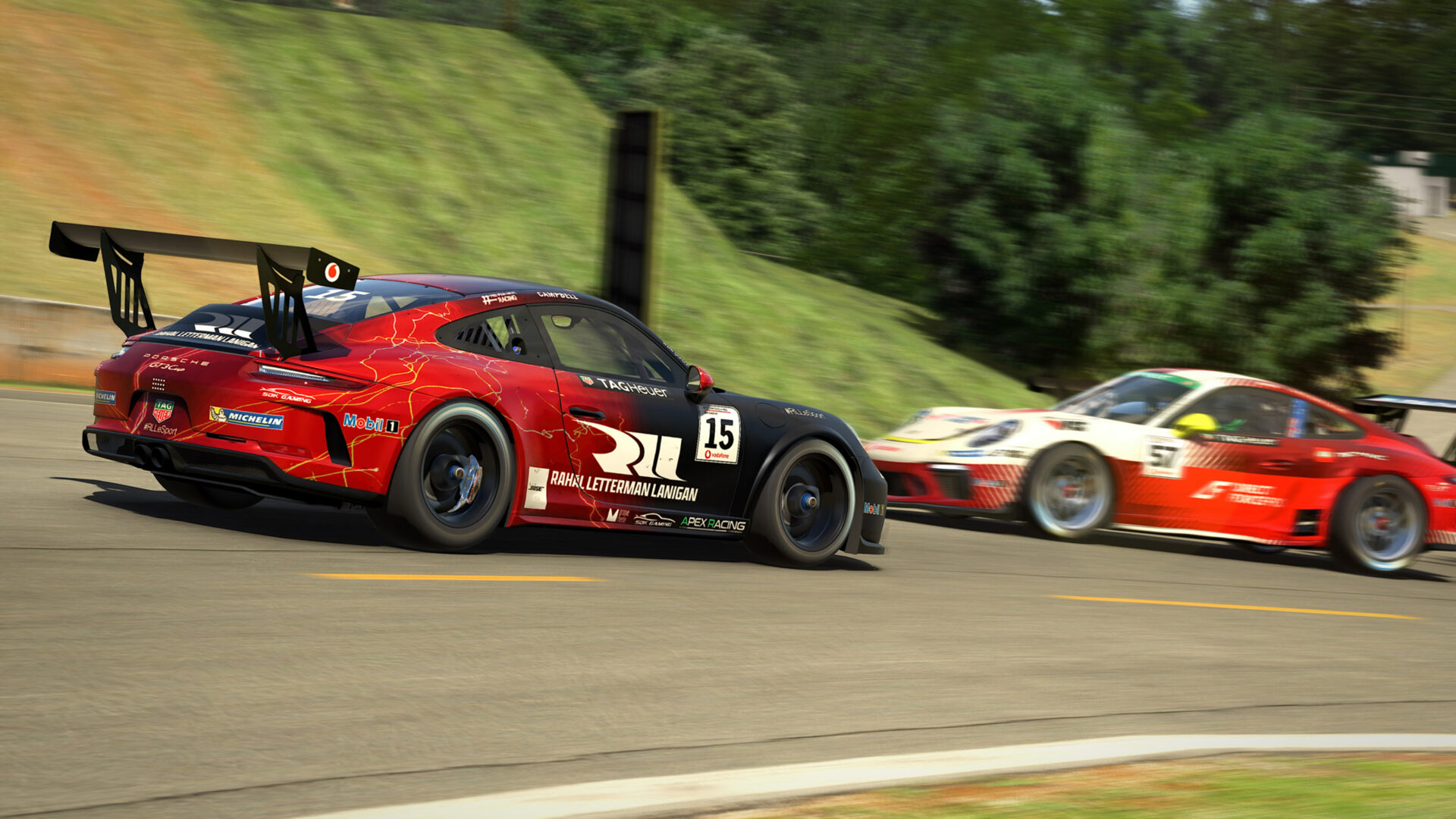 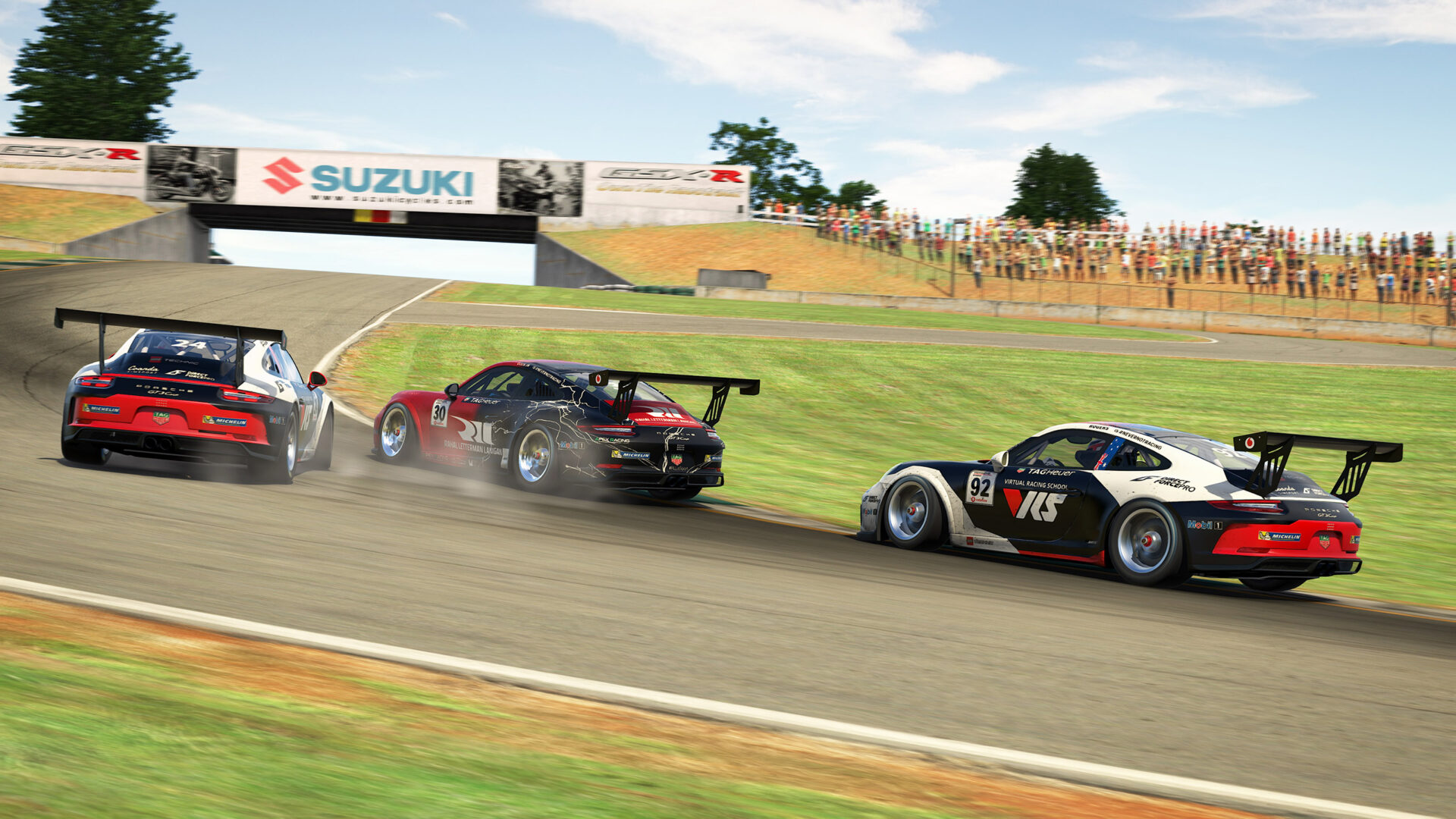 Diving into the final chicane, Ellis Jr. and de Jong went in side by side, but the lightest of touches sent de Jong into a twirl. A tiny loss in Ellis Jr’s momentum allowed Rogers to sneak up the inside and enjoy the prime line for the swooping right hander to the chequered flag. With Ellis Jr. hung out to dry and nowhere to go, contact with Rogers sent the RLL star hard into the wall. Luckily, Ellis Jr. tumbled over the line in third position. Albeit, reeling over the loss of a race win.

Whilst Ellis Jr. tussled for the lead, Yohann Harth delivered his drive of the season so far. Emulating Jamie Fluke’s charge through the pack at Silverstone, Harth ascended from thirty-second to tenth place. An astounding effort from the iRacing Rallycross World Champion. Bien joué Yohann!

Jamie Fluke: “Road Atlanta is a track I treat with great caution as I’ve never truly felt comfortable around here. I tentatively set a target of a pair of top 15s from both races and anything more than that would be a bonus, so getting 14th and 12th from the two races isn’t a bad day out. I was both lucky and unlucky with the pileup under the bridge on lap 8, unlucky to get caught up with a car rolling when it should hold the brake but lucky that I still could continue competitively enough to not lose too much ground and I picked up a few freebies as we went along. I’ve increased my gap to those outside the top 20, so all in all, a positive day.”

Yohann Harth: “I have no idea how it happened, but it did. After the sprint race, I was expecting to get caught in another lap 1 incident but Michele (Costantini) has done a superb job in the Feature to guide me through traffic and through the wrecks. The car was awesome in race trim, I gave it everything from the start to the finish. Thanks to the team and all the guys again, brilliant job the past 2 weeks” 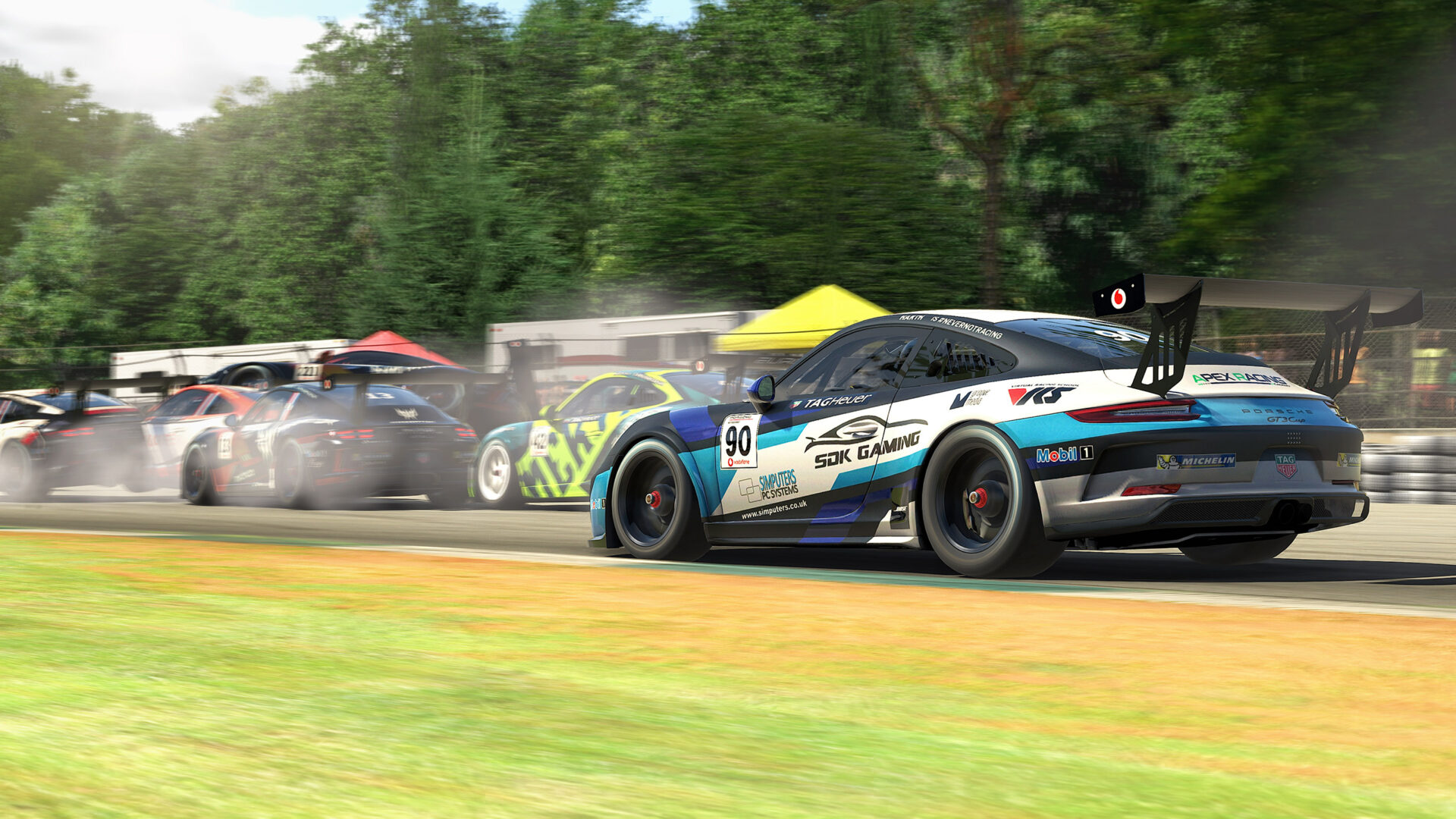 Kevin Ellis Jr.: “So close, yet so far! Put in my best Q lap of the season to date but seems we still missed something as Coanda locked out the top-6.

Managed to forge my way into P6 off the start of the Sprint and just had to play it patient as I knew if I went much further forward, I’d leave myself 3 cars to get through in the Feature and more at risk of getting tangled in something or losing touch to the front. Started 3rd in the Feature and knew I had to get into P2 early so I could control my own destiny a bit more and just try to be a thorn in Coanda’s side as much as I could. Unfortunately passing further back in the pack was tough and I had to battle alone up the front until Mitchell and I netcoded on the final lap at T10a allowing Rogers to get up my inside and in a last ditch attempt to pinch him tight to the line, it shot me into the outside wall leaving me 3rd and damaged across the line.

Great points day though and another big boost in confidence being able to mix it up at the front and be in with a shot at another win.”

Zac Campbell: “It’s just so unfortunate to see what happened. The sprint race couldn’t have gone better given the circumstances, and I’m super happy to grab some points from that, but I’m still gutted over the feature. Just caught up in a couple incidents I couldn’t really avoid. I just hate it because we circled this round at the beginning of the year as one where I could really perform, and I hate that it ended that way.”

Watch live On Saturday the 27th of February, as the iRacing Porsche Tag Heuer eSports Supercup visits Canada and the Circuit Gilles Villeneuve in Montreal. 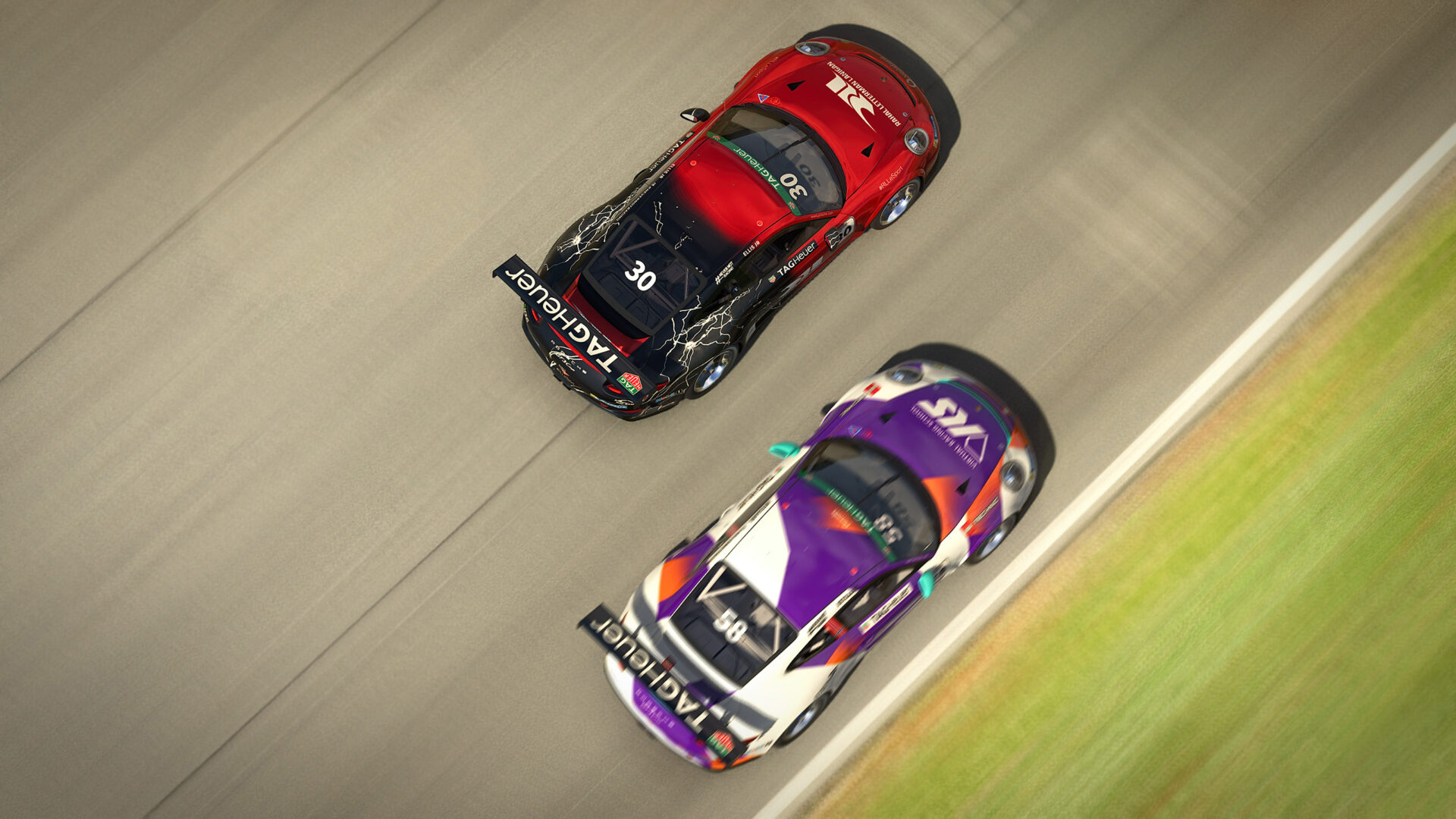