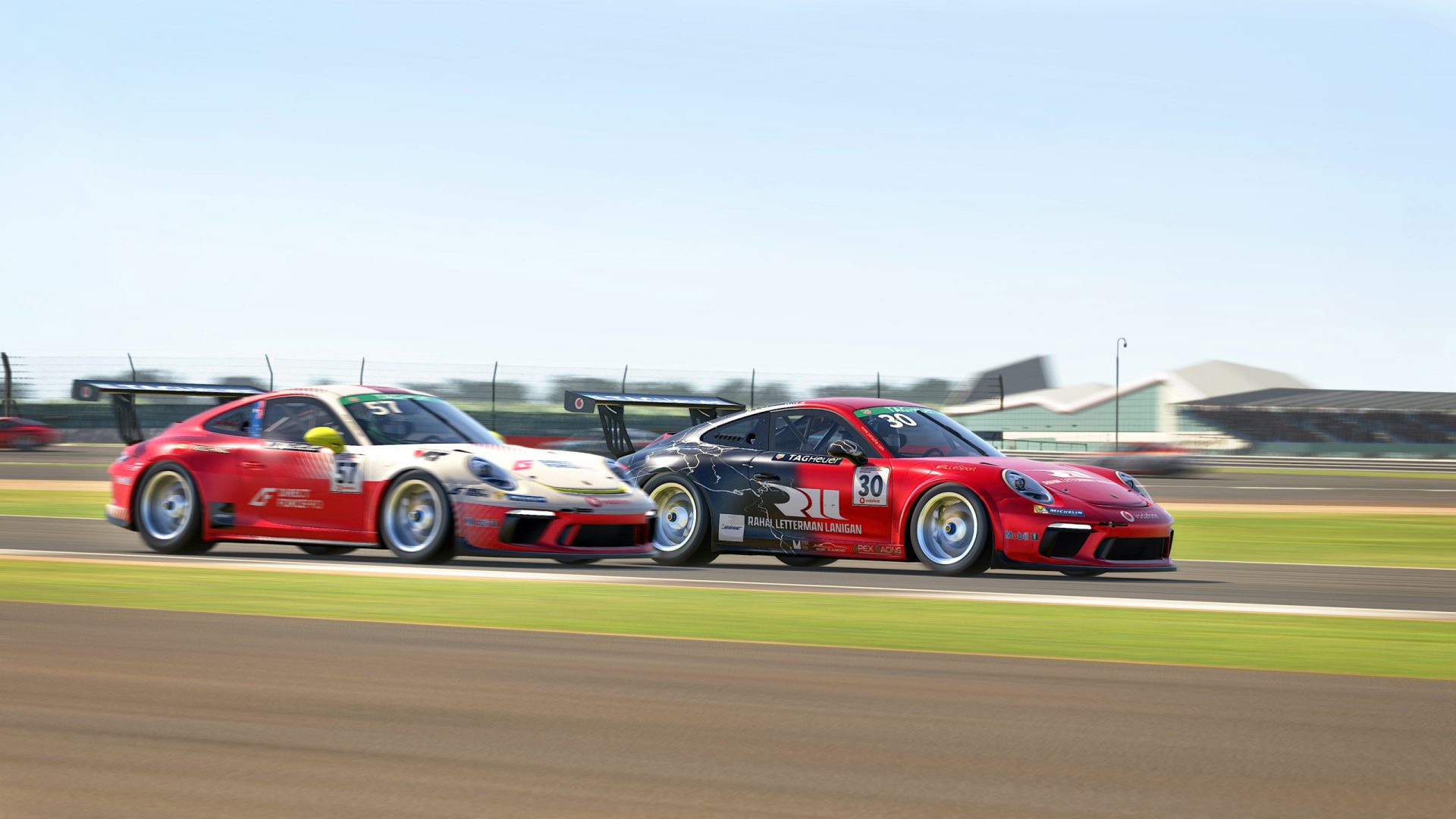 By Peter MacKayFebruary 9, 2021No Comments

Fluke flies through the pack at Silverstone!

Once again, qualifying was the subject of intense scrutiny. In a field with forty of the world’s best virtual racers, lap times are unfathomably close. Therefore, track position gained in qualifying is far easier than position earned in wheel-to-wheel combat. Additionally, Silverstone’s modern ‘village’ section has developed a notorious reputation for lap one tangles. Drivers must negotiate a combination of switchback bends, swarmed by other cars. Contact is nearly inevitable. Therefore, avoiding the mid pack in qualifying is crucial.

Continuing his strong form from a podium finish at Imola, Kevin Ellis Jr. qualified fastest of the RLL/ART quintet in twelfth place. RLL superstar, Zac Campbell, qualified three rows further back from his teammate. Jamie Fluke set the pace of the Apex Racing Team crew in fourteenth place, with Yohann Harth immediately behind. Brilliant Brazilian, Jeff Giassi, trailed by only half a second from pole position and qualified nineteenth.

As predicted, the opening sector wreaked havoc at the epicentre of the field. A multi car pile up claimed Jeff Giassi and Yohann Harth, dropping both down the order. Jamie Fluke dodged through by a whisker, only to fall foul of contact from the rear at the club chicane later in the lap.

Starting eighteenth, Zac Campbell managed to profit from the early melee and leapt to thirteenth position. Sadly, Campbell’s charge would last only four laps. A tangle on the exit of Luffield sent the American ace into the wall and down the order.

With three laps remaining, Kevin Ellis Jr. carried Rahal Letterman Lanigan’s hopes on his shoulders. Embroiled in a fight with Max Benecke and Tommy Ostgaard, the speedy Scotsman diced for eighth place and reverse grid pole. A minor loss of momentum from an aborted move on Ostgaard, dropped Ellis Jr. behind Benecke on the final lap. Nevertheless, another top ten finish ensured that the #30 RLL Porsche man booked strong points towards his championship campaign.

By virtue of his tenth-place finish in race one, Kevin Ellis Jr. started the fourteen-lap feature race of round 4 from the fifth row. Jamie Fluke, Yohann Harth, Zac Campbell and Jeff Giassi, were forced to start deep in the pack after their race one misfortune.

Sadly, Silverstone’s opening sector proved perilous once again. Unable to avoid a stricken Porsche, Giassi’s race was over before it began. Zac Campbell also fell afoul of the lap one scrum, signing off on a disastrous day in the Northamptonshire countryside. 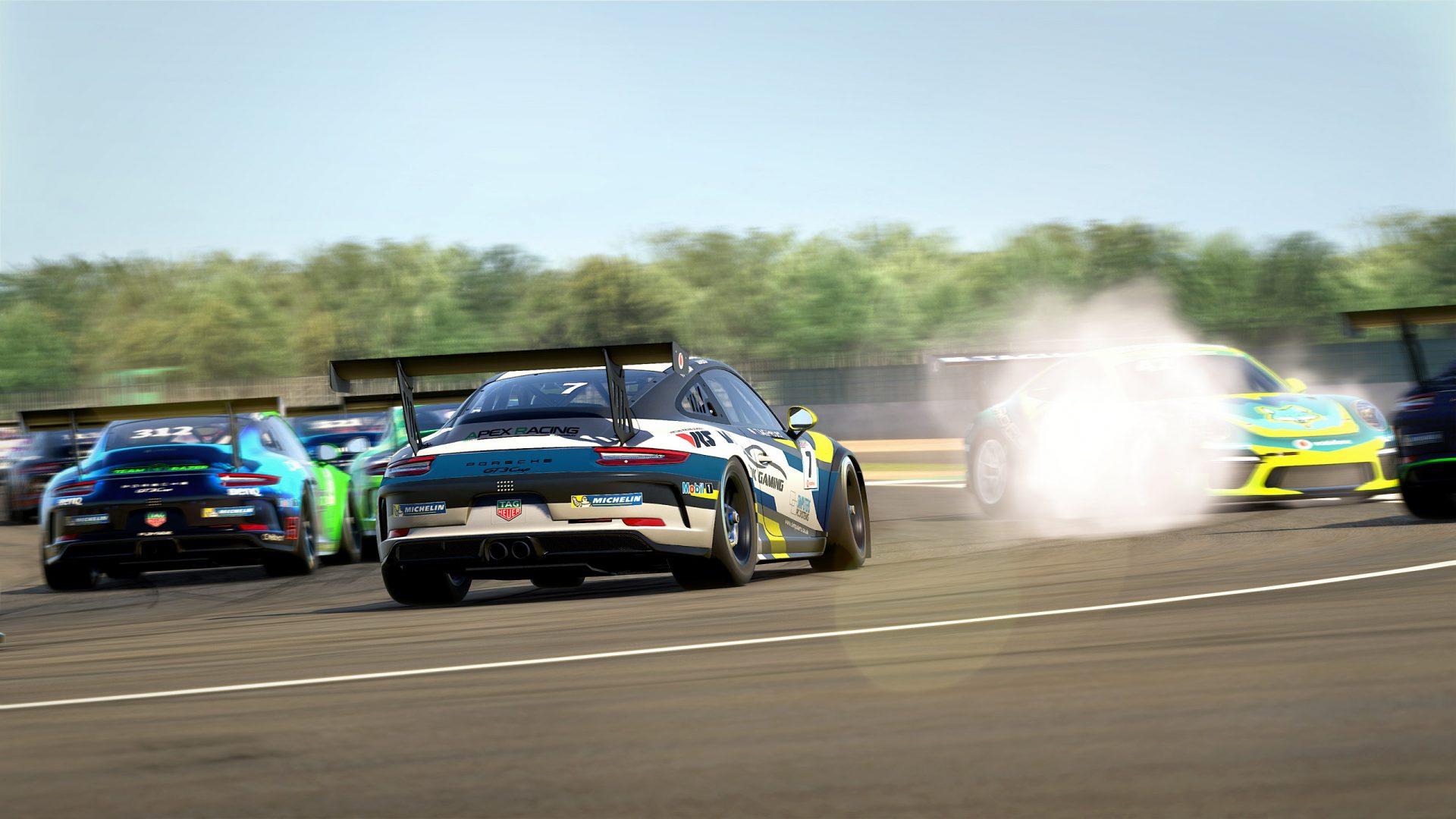 iRacing World Rallycross champion, Yohann Harth, valiantly charged through the pack in the opening lap. By lap two, the French star had progressed to the fringes of the top fifteen. However, Harth’s heroic charge was thwarted by suspension damage with only three laps remaining.

Kevin Ellis Jr. locked horns with Dayne Warren in a contest for seventh place throughout the race. As a result, the Glaswegian star lost contact with the front pack. With Warren now dispatched with, Ellis Jr. squared up to Ayhancan Guven in a last lap slugfest. Charging to the chequered flag, Ellis Jr. enjoyed the critical inside line, leaving Guven no choice but to risk it on the outside. Inevitable contact sent Ellis Jr’s #30 RLL Porsche into a spin across the line, but still scored in seventh place. Once again, Ellis Jr. had resisted the most intense pressure to seal a double top ten finish. 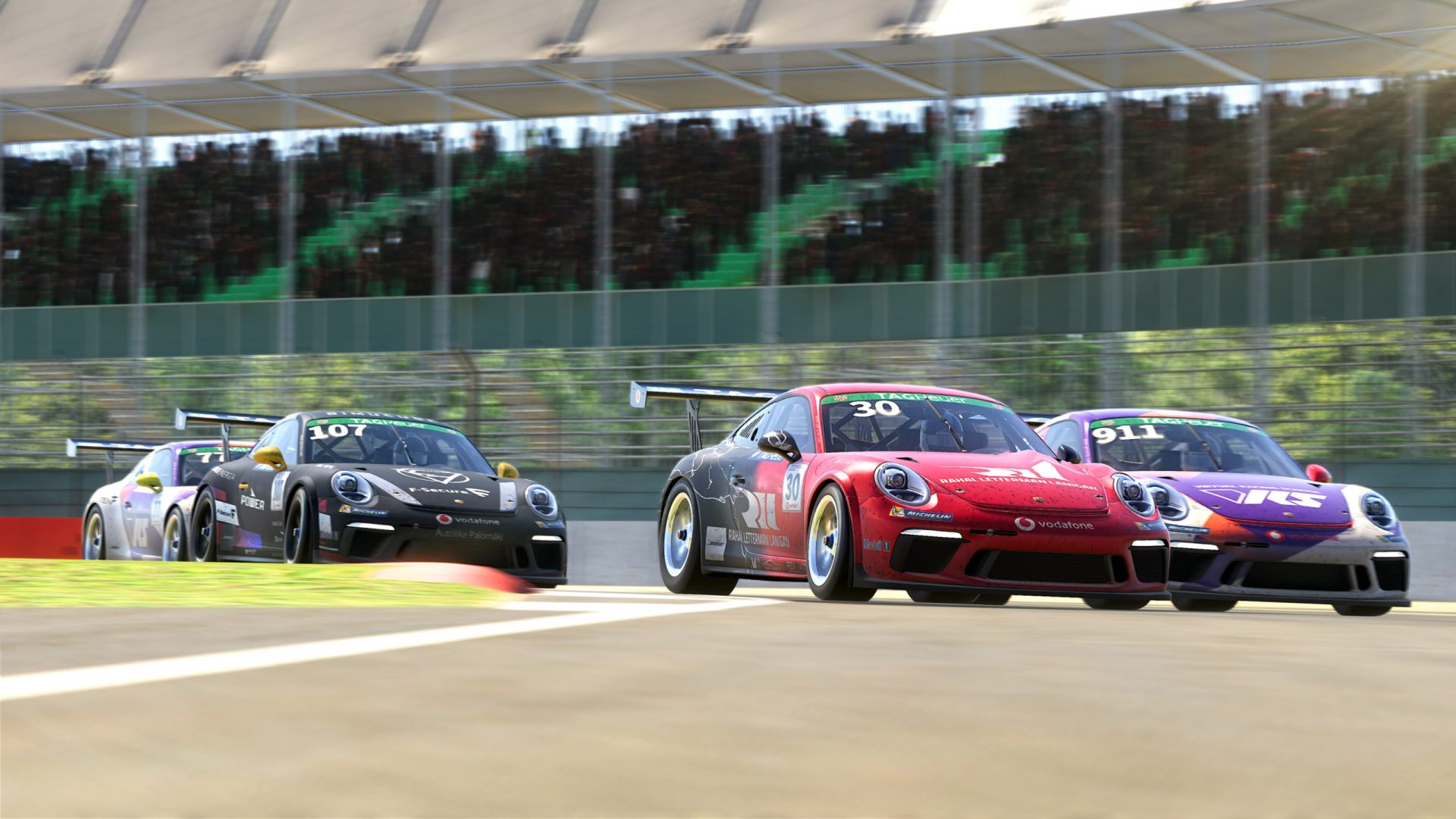 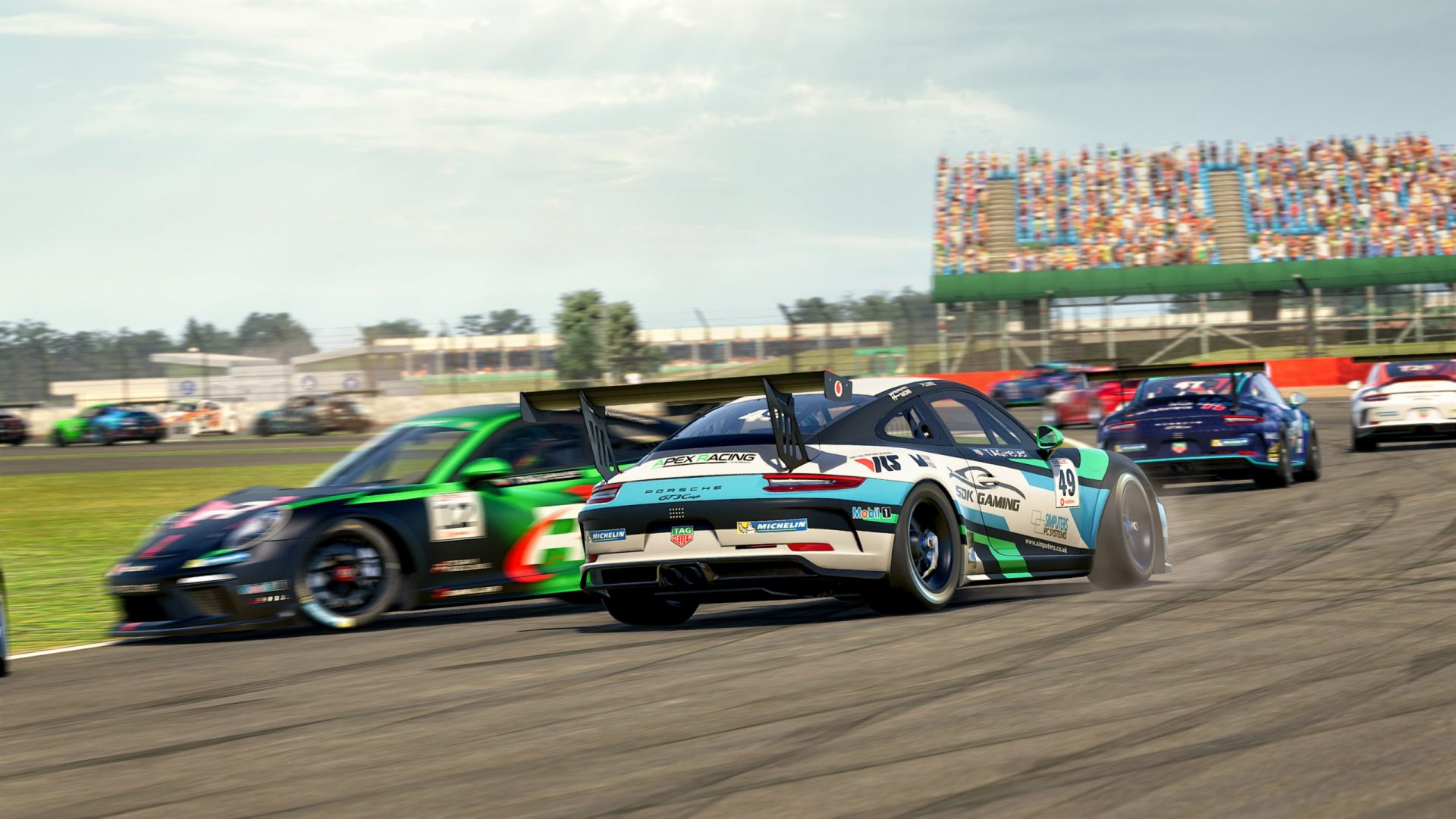 However, man of the meeting must go to Jamie Fluke. Apex Racing Team’s determined Northern Irishman endured a difficult pre-season mired by an arm injury. At this level, preparation is paramount, and Fluke’s lack of mileage in preseason left a distinct disadvantage to overcome. Following a disappointing race one, Fluke was forced to start form thirty-fifth place. Nevertheless, the Armagh ace calmly picked his way through the pack to finish fifteenth. Every position on track in the Porsche Tag Heuer eSports Supercup is so fiercely contested. Therefore, to gain twenty positions in one race cannot go unrecognised.

Jamie Fluke: “I went in with cautious optimism to Silverstone for the first time this season and ended up being a bit unlucky but encouraged by the general progress. We missed a little bit on the out lap strategy in qualifying this week so despite a much better lap than at Imola, 14th was all I had to show.

The sprint race was a disaster, I was unsighted as I came up to the spinning Talens in the Loop, annihilating my car and feeding me all the way to 39th before picking up scraps to end in 35th.

The start of the feature was as chaotic, I had to dodge like I’ve never dodged before to get through the opening few corners, but from there I picked off a few guys who were a bit slower and took advantage of others falling by the wayside to pick up 15th place. I’m disappointed to have not scored big points this week, however relieved to get anything at all.” 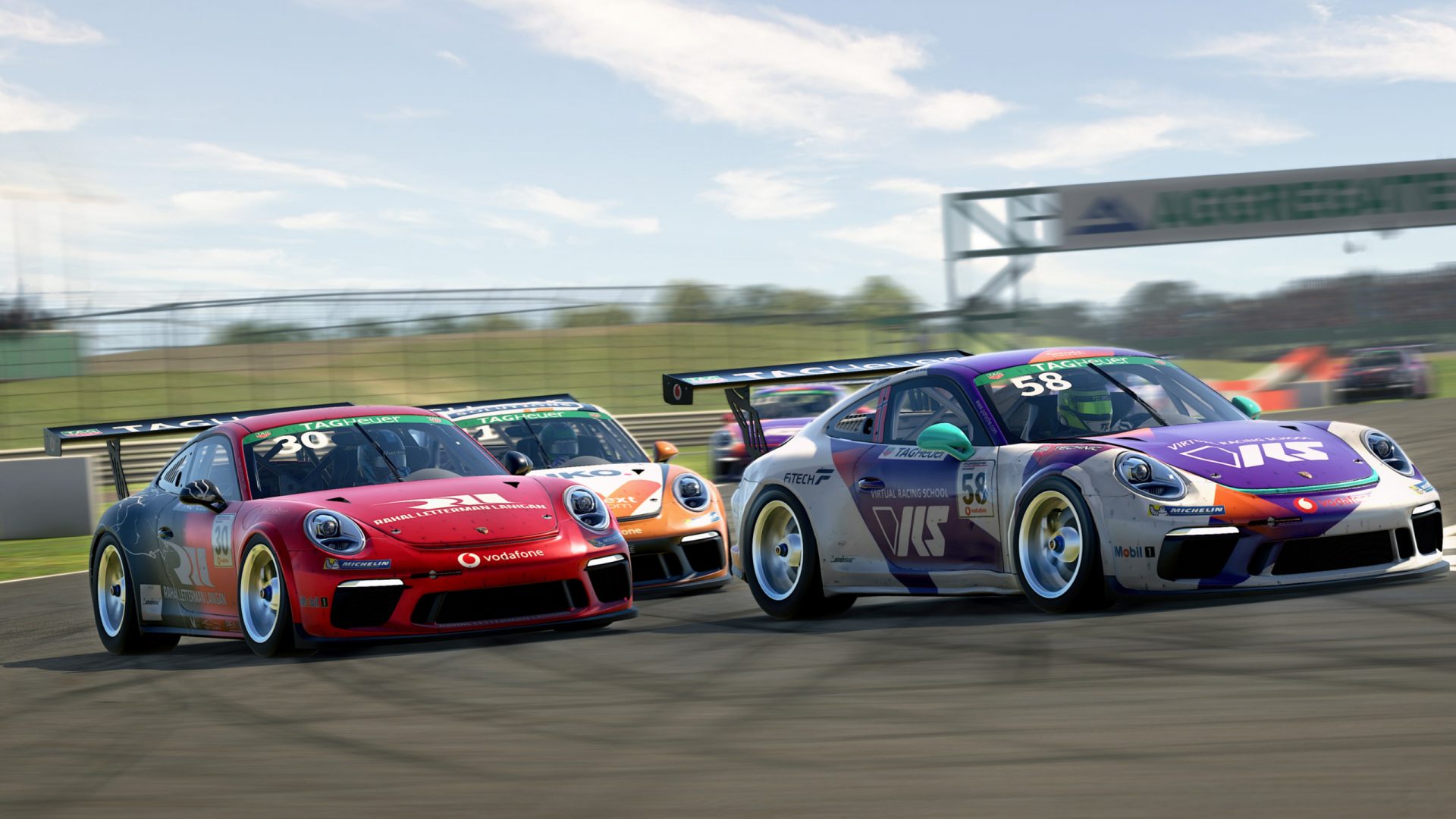 English: “Well, even though the race wasn’t great for me I’m still happy with my development as a driver. I’m clearly getting more and more experience as these races go by no matter it’s a good result like last week or a bad result as this one. For both cases, the improvement is there and that’s what I have to do, keep improving and one day I’ll be fighting at the top.” 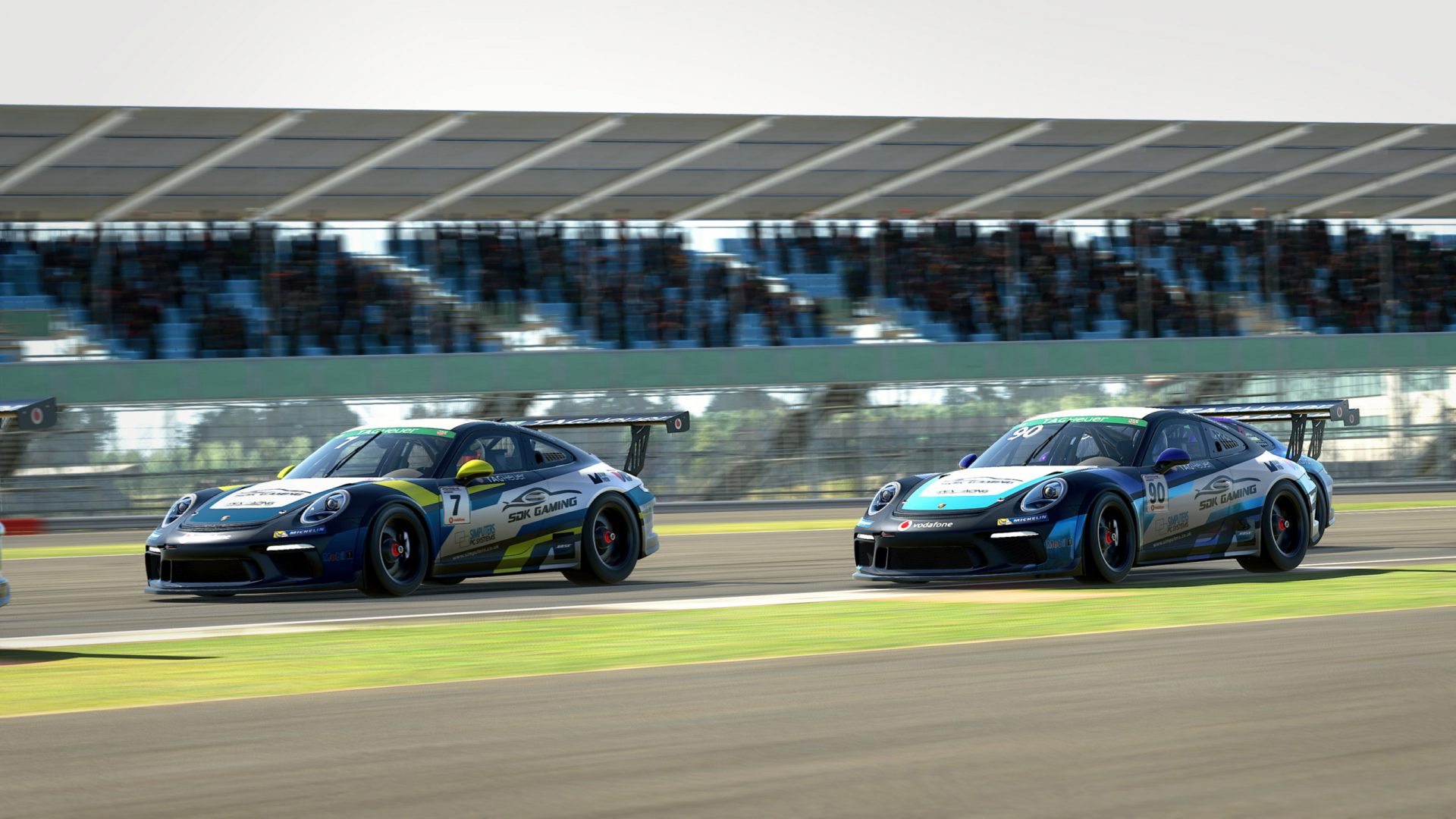 Yohann Harth: “I don’t really know what I have to do to avoid carnage.
P15 on the grid, almost all the Apex/RLL cars close on track (I think it was 4 of us between P12 and P17). But just like Interlagos and Barcelona, I got ran over, nothing I could do here, except I was higher up the grid, so it makes it 10x more frustrating.”

Kevin Ellis Jr.: “Tough, tough weekend that one. Coanda did a great job to get all their cars up front in qualifying so that left me a really tough job to get myself into the top-8 in the Sprint race to try and get a reverse for the Feature race.

We fought hard but could only manage 10th in the Sprint and got to 7th in the Feature after a hectic last couple laps trying to attack and defend Coanda at the same time. Happy enough with some solid points and head off to Road Atlanta in 2 weeks time.”

Zac Campbell: “I didn’t really hit my qualifying lap like I needed to, but I got lucky at the start and was able to slot in a few cars behind Kev. I hate that our day ended up effectively over because of some net code soon after that, but it’s part of it, just gotta take it on the chin and go run even better at Road Atlanta!”

Kevin Ellis Jr, Zac Campbell, Jeff Giassi, Jamie Fluke and Yohann Harth will enjoy an extra week of preparation for round five of the championship at Road Atlanta. Zac Campbell will be the anchor man for the ART and RLL squad at his home circuit. Tune in to the behind-the-scenes live stream on Apex Racing TV at 7pm GMT on the 20th of February.