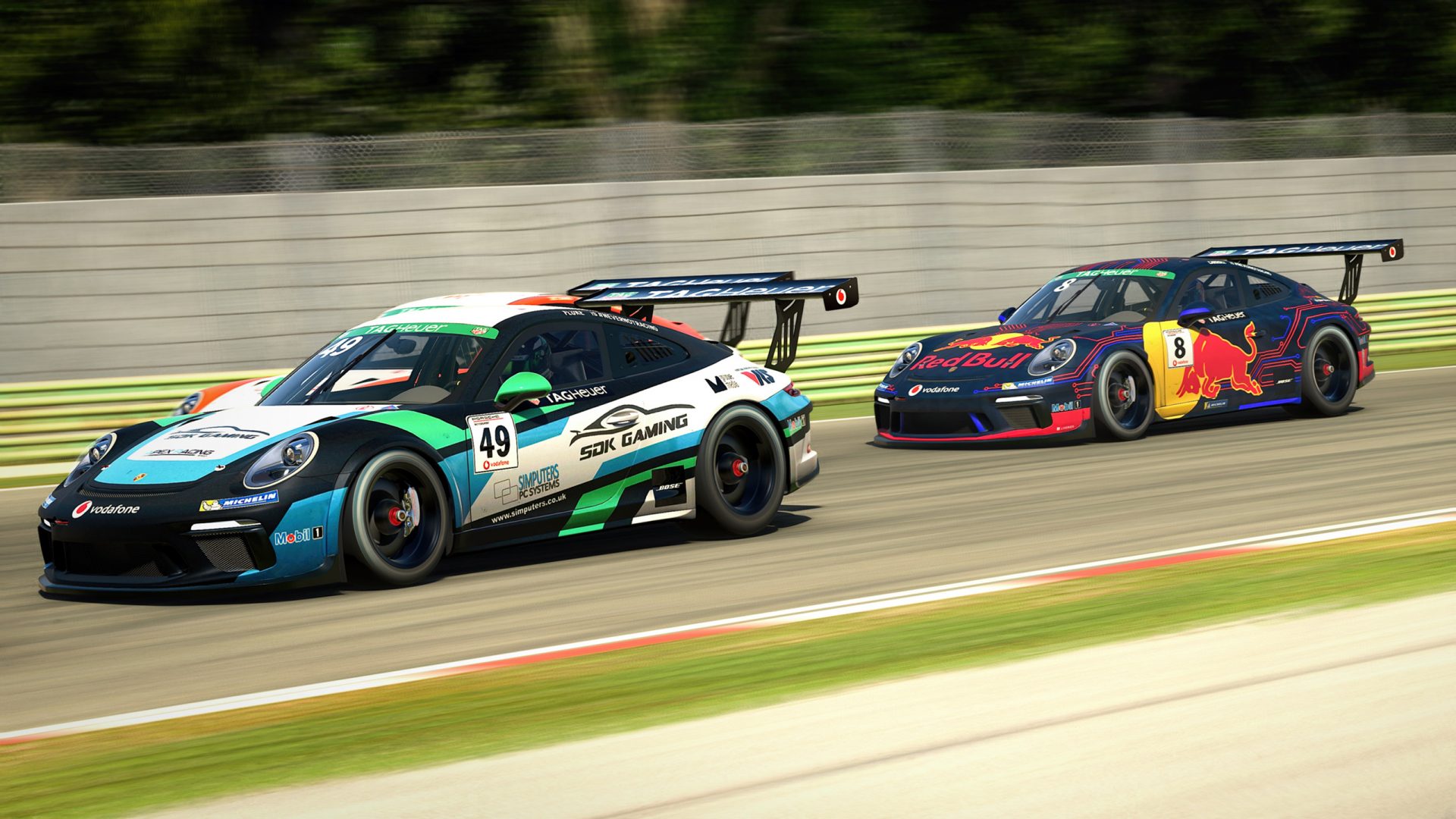 By Peter MacKayFebruary 2, 2021No Comments

In the wake of the ecstatic high of Kevin Ellis Jr’s debut victory at Interlagos and the crushing low of the Catalunya calamity, Rahal Letterman Lanigan (RLL) Esport and the Apex Racing Team (ART) arrived at round three of the Porsche Tag Heuer eSports Supercup with a score to settle.

Autodromo Internazionale Enzo e Dino Ferrari, or Imola as it’s more commonly known, presents a stern challenge to any driver. Following a two-week break, the paddock reconvened at this glorious Italian parkland circuit to continue the fight for sim racing’s most coveted crown.

Throughout race one Zac Campbell proved that his early season form has been no fluke. In the shadow of series champions, Sebastian Job and Joshua Rogers, Campbell looked serenely comfortable in third place and bagged his first podium in the Porsche Tag Heuer eSports Supercup. Following two disastrous meetings so far, Yohann Harth seized the opportunity to finally showcase his blistering pace and finished fourth.

Kevin Ellis Jr. settled for seventh place after a quiet race on the tail of the lead pack. However, the Scotsman would be granted a priceless front row start for the feature race. Jamie Fluke and Jeff Giassi ensured all five RLL and ART cars finished in the top fifteen.

In the early stages of the feature race, Kevin Ellis Jr. settled in behind MSI Esports’ Spanish star, Alejandro Sanchez. Ellis Jr. wisely refrained from attempting a pass on Sanchez, ensuring that the leading duo kept their momentum up and free from the chasing pack. 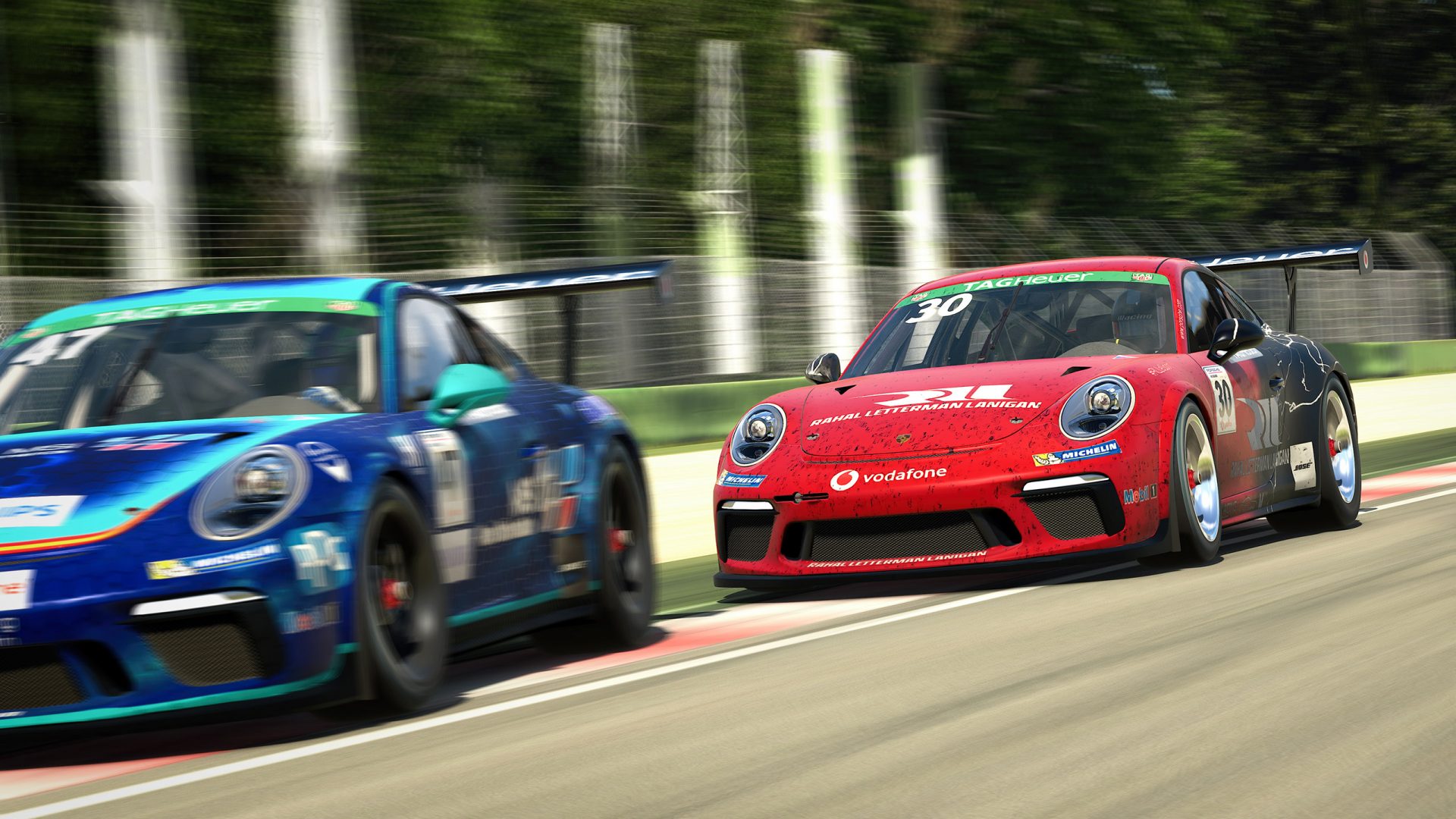 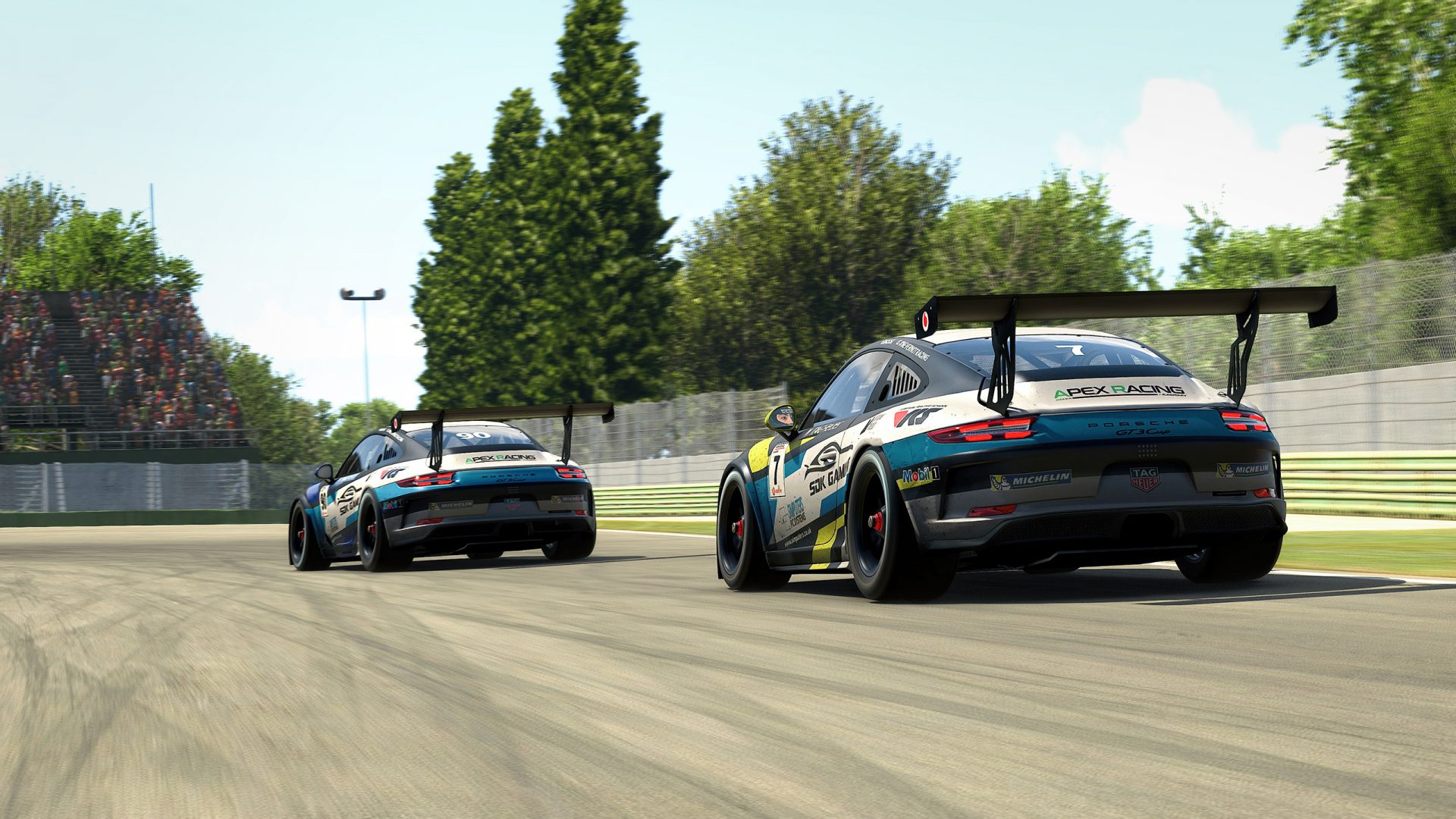 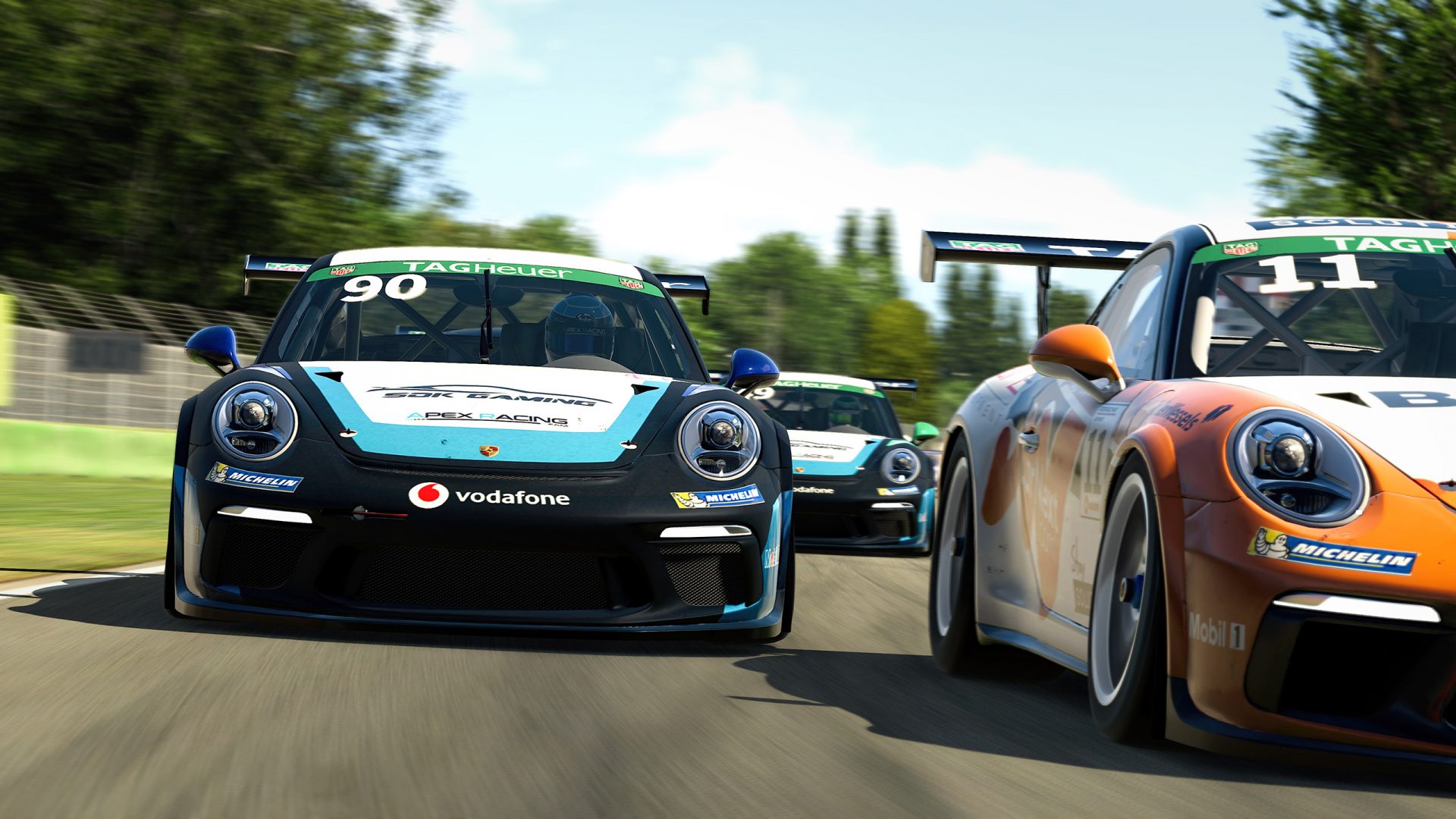 However, once Joshua Rogers broke clear from the pursuing pack, the Australian began bridging the gap to Ellis Jr and Sanchez. On arrival, Rogers wasted no time and moved past Ellis Jr. at Tamburello, before dispatching with Sanchez shortly after. Yet, Rogers couldn’t escape, remaining embroiled in the lead battle all the way to the flag. Kevin Ellis Jr. enjoyed a grandstand view and prepared to capitalise on any slip up from the leading pair, but Rahal Letterman Lanigan’s Scottish superstar eventually settled for third place. As a result, Ellis Jr.’s championship campaign is firmly back on track.

Zac Campbell brawled with Max Benecke for most of the eighteen-lap feature race and claimed yet another top five finish. By far, Campbell is the standout performer of those who negotiated the peril of pre-qualifying to book their place on the grid.

Yohann Harth: “That’s more like it! A tremendous effort from all the guys this week to figure out qualifying.
My qualifying lap was nothing special, I basically just hit my marks and I was quite surprised to see myself fourth on the grid. From there, it was all about bringing the car home in a good position, I couldn’t afford a crash with such a bad start to the season. Job done in the sprint, started P4 and finished P4 with no pressure. In the Feature though, things were a bit more complicated. I made a last minute change on the setup and turned the car into a dump truck. Got a few inside front lockups early in the race, and dropped to P10 after a small contact with Zac. I expected more in the Feature after that Sprint race but as I said, I needed points so I’m still super happy with the result.
Silverstone now, let’s keep it up!” 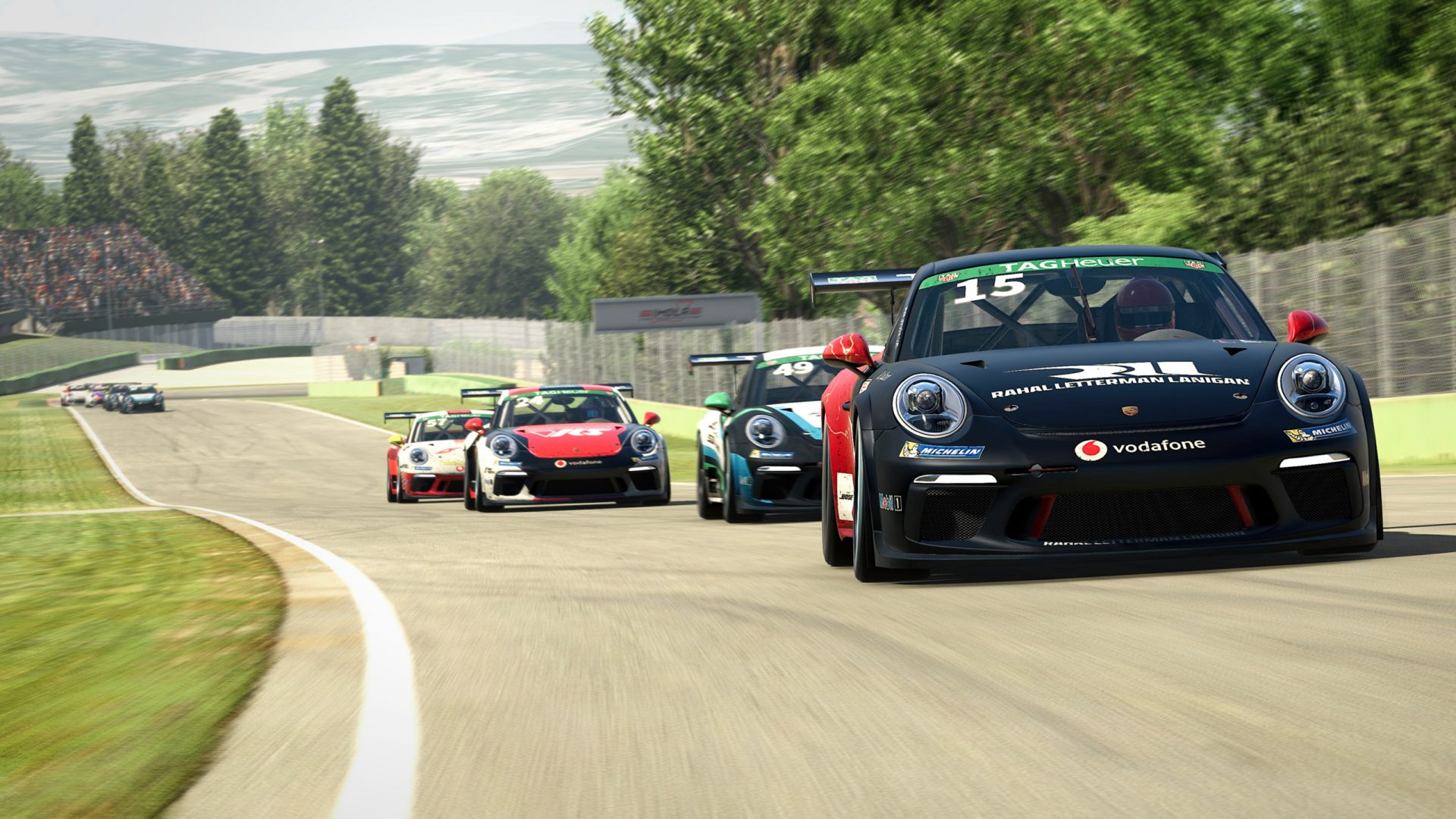 Jamie Fluke: “Finally up and running for the season. The guys worked super in the build up to the race and we all pushed each other along to ensure we showed up ready to roll. To get all of us in the top 10 is great. Picking up 6th is a huge surprise for me as I’ve never been comfortable around Imola and it’s never been a track I truly excelled at, so to get strong points on the board is just reward for the progress made. It was far from easy especially with the pressure from behind but I managed to do enough things right and I’m very pleased.”

Kevin Ellis Jr. “It felt great to bounce back this weekend. After the struggles at Catalunya, the whole team put in a massive effort to get on top of qualifying and also managed to put a really solid race car together.

Had a pretty quiet meeting overall, just focused on keeping out of trouble and putting myself in a position to capitalize on other people’s mistakes!

Overall, a good haul of points and back into the top-5 overall, all eyes on Silverstone now!” 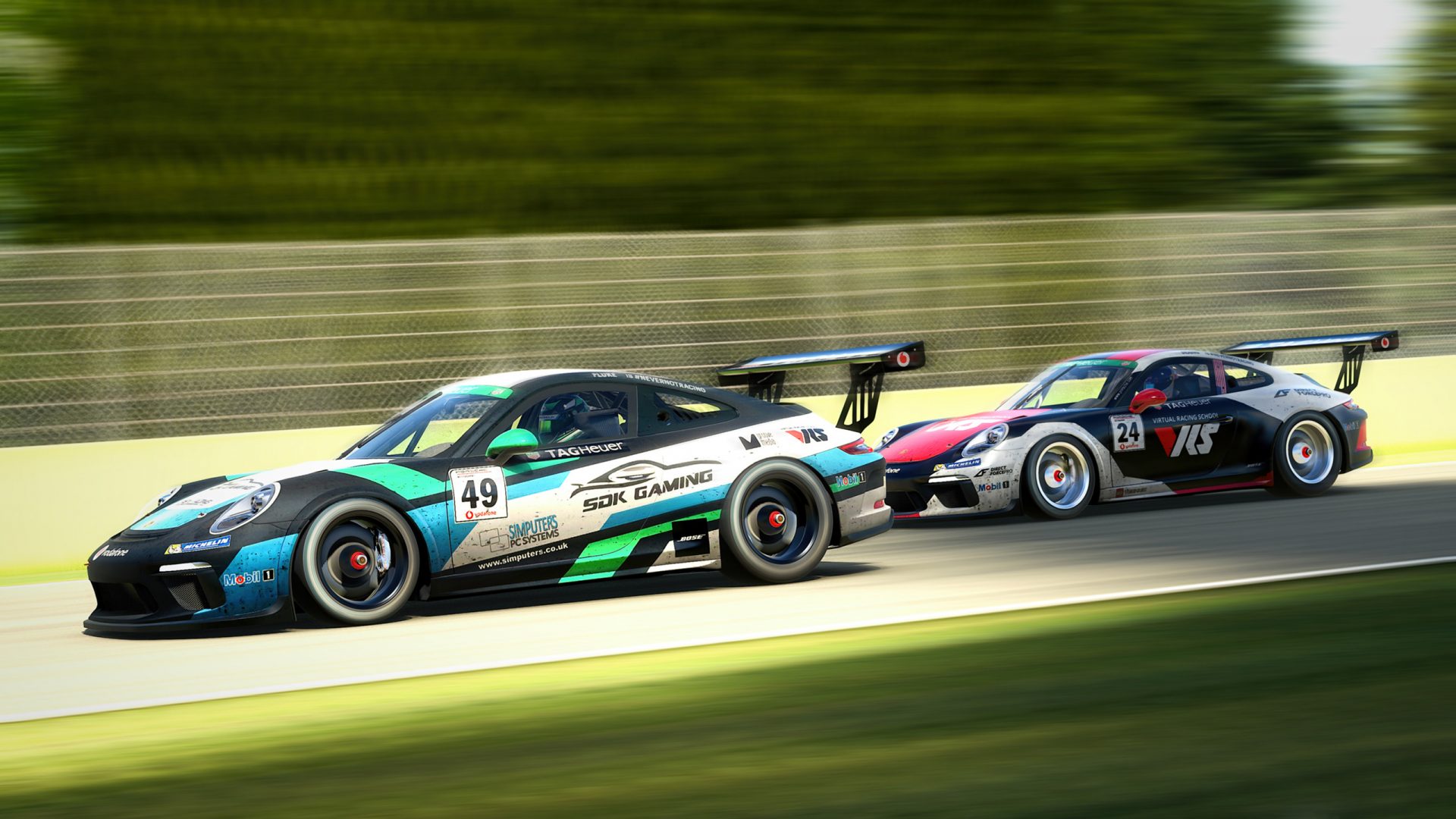 Zac Campbell: “I’m super thrilled with what we were able to do this week, not only just with myself, but the whole team in general. Kevin and I were able to challenge up front all day, while you saw everyone from our technical alliances able to run solidly in the top 10. It’s been amazing to see what we’ve been able to do this season and the step forward that we’ve taken. I am beyond grateful for everyone around me and everyone at RLL Esport. Next week will be a bit of a struggle with limited practice time, admittedly, but I’m super excited to see what we can do next.”

Jeff Giassi: “The race was incredible, starting on the mid pack and fighting my way up to the Top10 was not an easy task. I’m not only proud of what we did as a team but also proud of the comeback from having all five cars piled up in a crash at Barcelona to having all five cars finishing inside the Top10 on the very next race at Imola.” 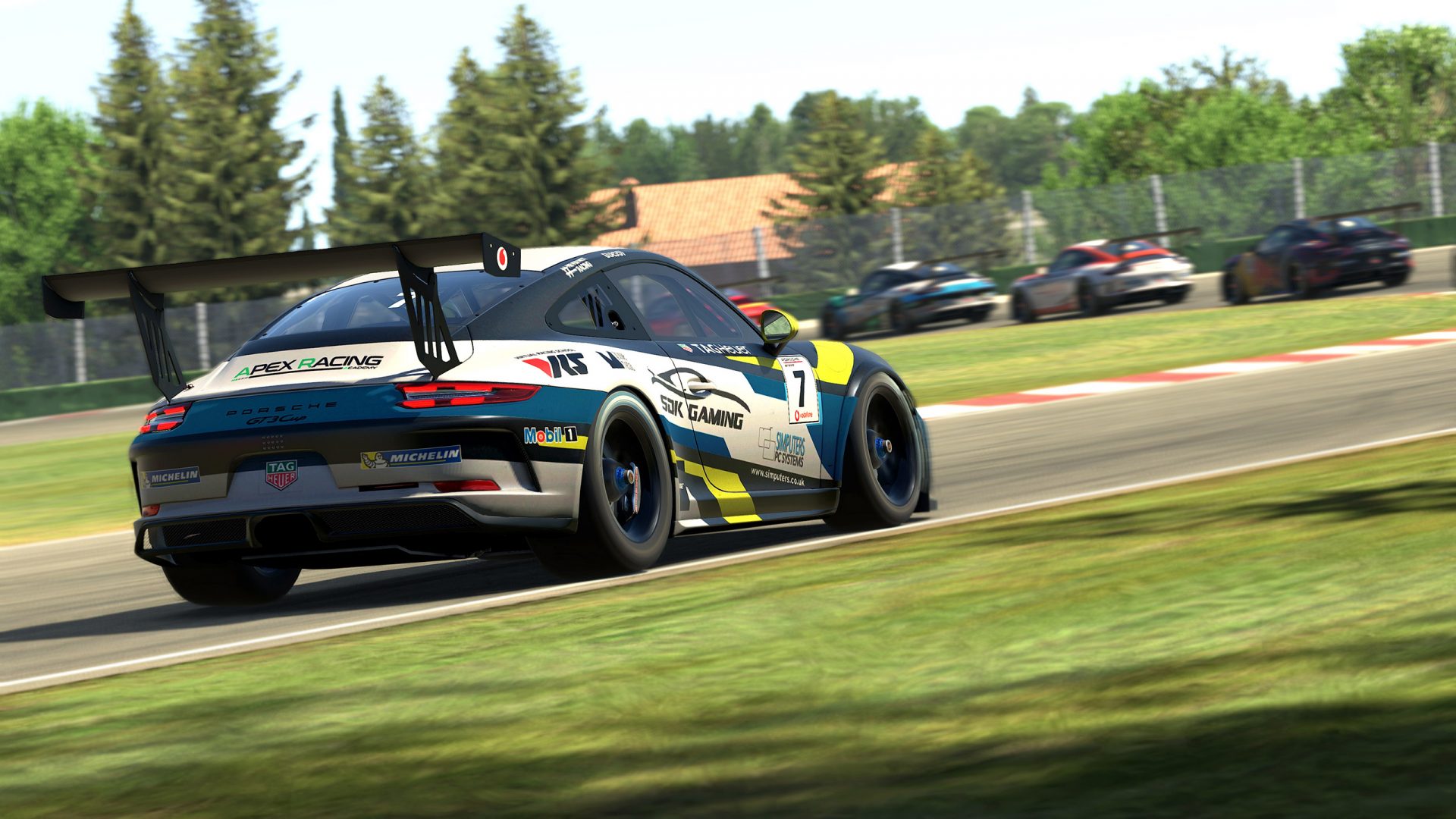 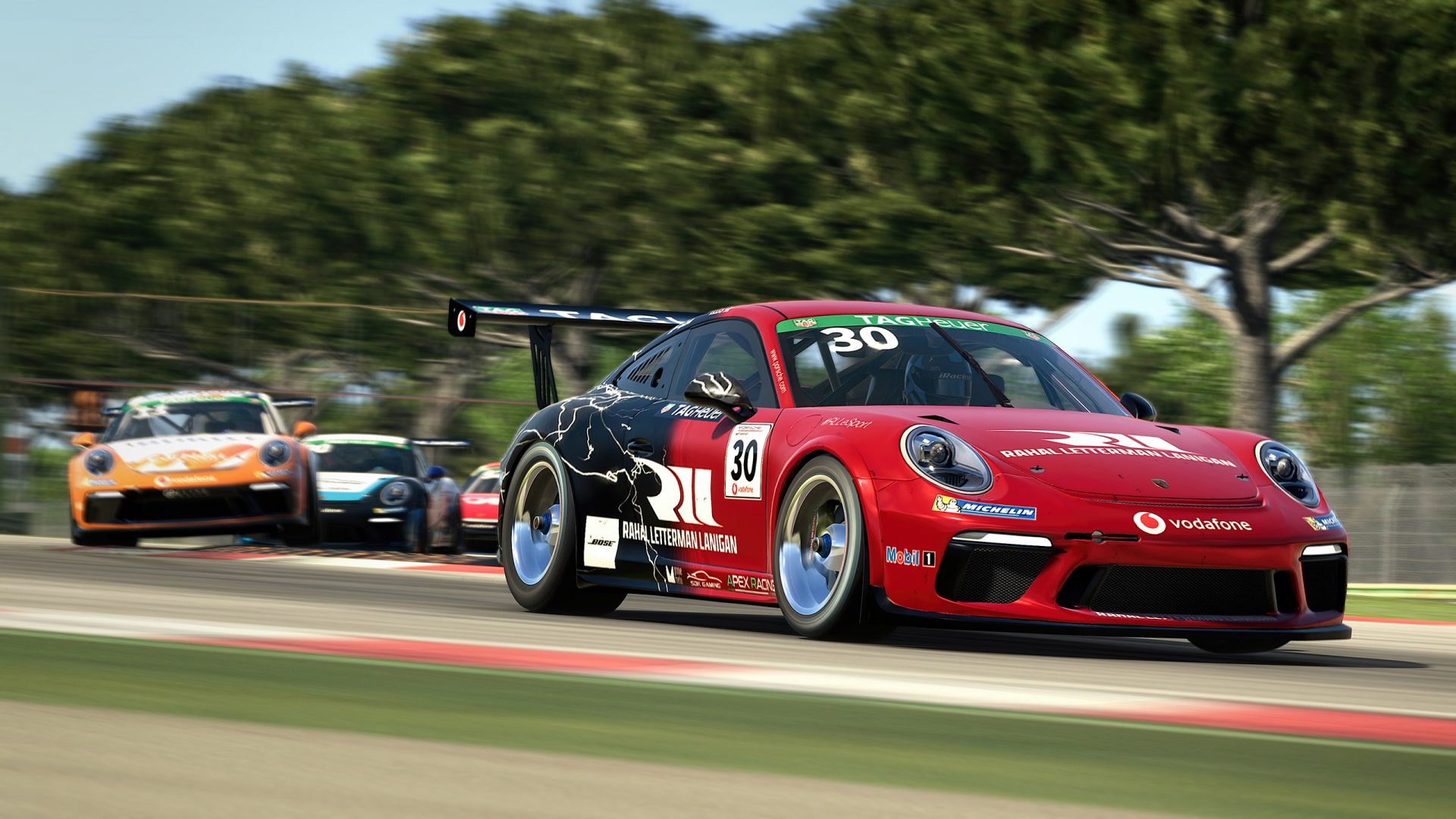 On the sixth of February, the Porsche Tag Heuer eSports Supercup visits the home of British motorsport, Silverstone. A circuit which will be reassuringly familiar to drivers and fans alike. Tune in at 7pm GMT to the behind-the-scenes Apex Racing Team and Rahal Letterman Lanigan stream to watch Kevin Ellis Jr, Zac Campbell, Jeff Giassi, Jamie Fluke and Yohann Harth in action.

Follow the link below to watch the team in action: