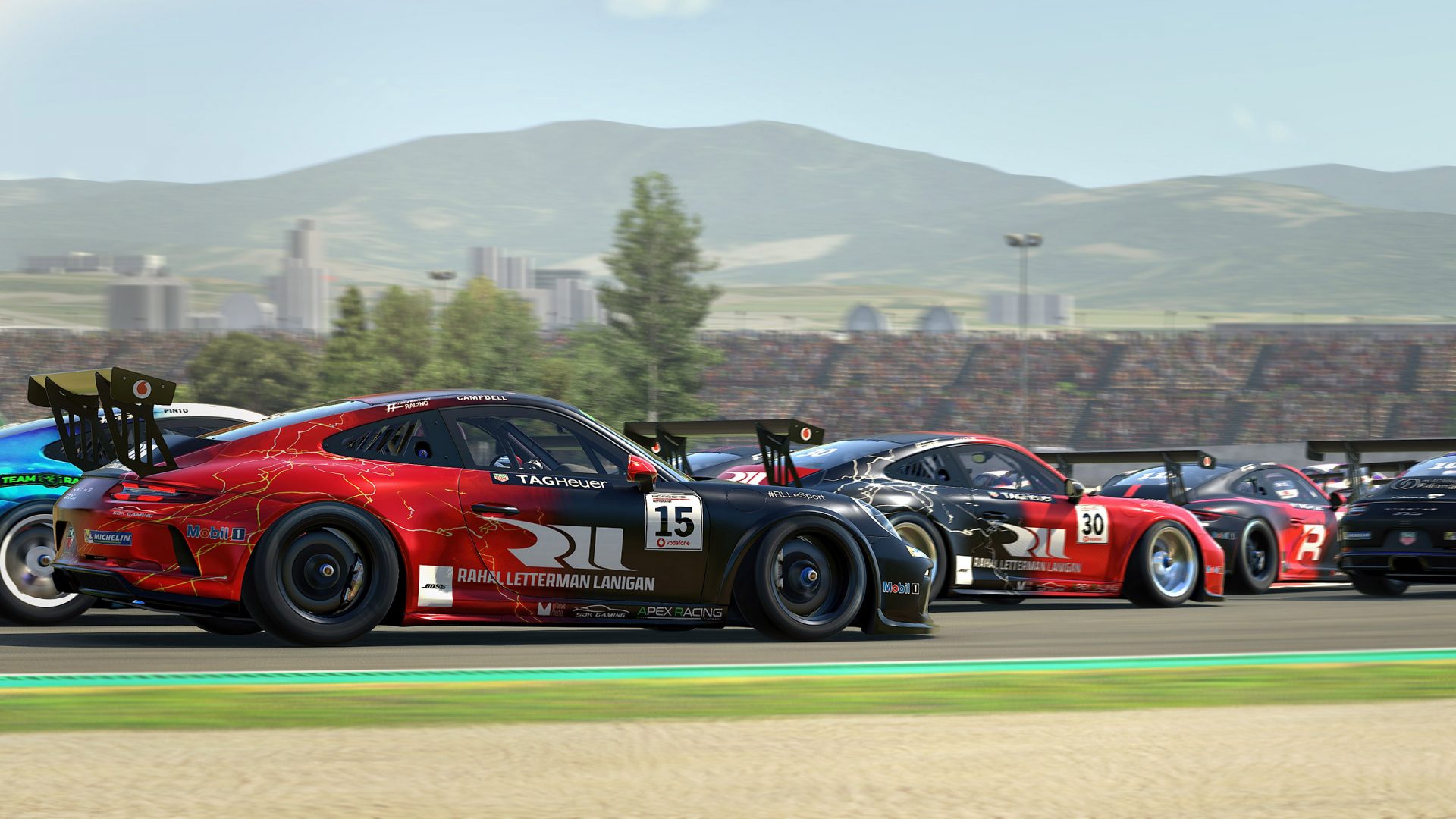 Rahal Letterman Lanigan’s (RLL) alliance with the Apex Racing team began perfectly at the opening round of the Porsche Tag Heuer eSports Supercup. A win on debut for Kevin Ellis Jr. sent the Scotsman into round two as the championship leader. However, the RLL Esport and Apex Racing Team (ART) crew encountered a day to forget at the Circuit de Barcelona.

Once again, controversial tactics from one faction of the grid in qualifying, sent the field into a heated mood. During the sprint and feature races, tempers flared in the Catalunyan cauldron, causing several incidents.

Zac Campbell qualified fastest of the RLL Esport and ART quintet, in twentieth position on the grid. For context, RLL’s American star lapped less than a tenth of a second from defending champion, Sebastian Job. Championship leader, Kevin Ellis Jr., started a row behind Campbell in twenty-second position. Once again, ART’s new signing Jeff Giassi impressed in qualifying and was fastest of the ART trio in twenty-third place.

On the opening lap of the nine-lap sprint race, unbridled chaos ensued. First to fall victim to lap one over-exuberance, was Jamie Fluke. A massive pile up at the Seat hairpin swept Fluke’s 911 away in a tsunami of spinning Porsche 911s. Later in the lap, Zac Campbell and Yohann Harth also fell victim to multi car pile ups.

In contrast, Kevin Ellis Jr. ducked and dived his way through the various wreckages to start lap two in sixteenth place. Jeff Giassi also made it through, three places behind Ellis Jr. Throughout the remainder of a chaotic opening encounter, Ellis Jr. displayed masterful race craft in his #30 RLL Esport Porsche and climbed to twelfth place at the flag. A tenacious drive from the Scottish star.

Jeff Giassi grappled with a damaged ART Porsche to finish eighteenth. A marvellous display of damage limitation for the brilliant Brazilian.

By virtue of his race one ascent to twelfth, Kevin Ellis Jr. started the eighteen-lap feature on the sixth row of the grid. Thus, setting up a fine opportunity to bag strong points and move on to Imola for round three. However, it wasn’t to be. At the La Caixa hairpin, a tap from a following car sent Ellis Jr. into a spin and into the path of a flurry of errant cars. So widespread was the ensuing carnage that Zac Campbell, Yohann Harth and Jamie Fluke all fell victim to the same melee. 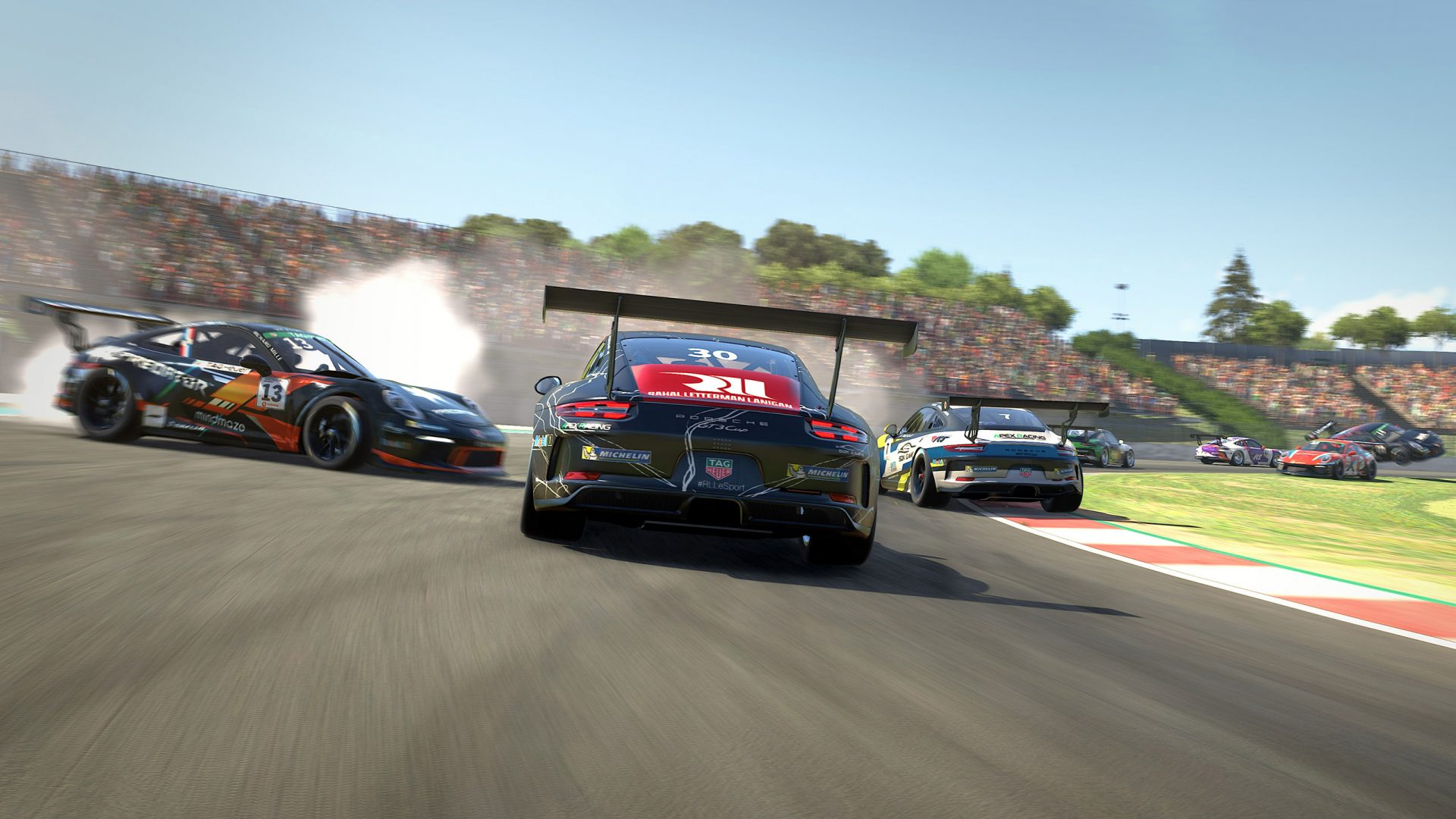 Of the five RLL and ART entrants, only a wounded Jeff Giassi emerged on lap two, in thirty-second place. Once again, Giassi exhibited a wonderful fighting spirit and dragged his damaged Porsche to twenty-fifth place. 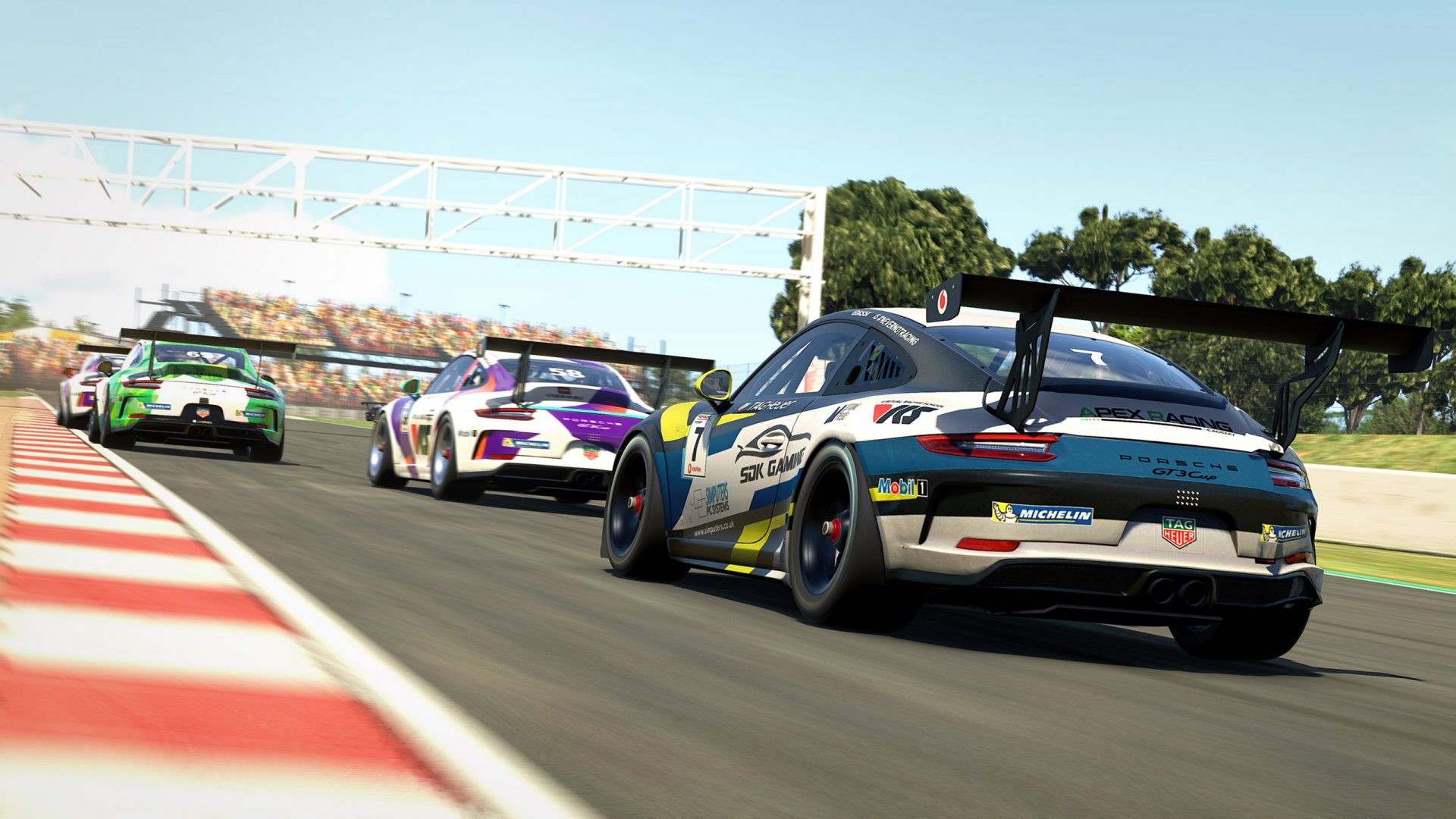 Despite round two in Catalunya becoming a day to forget, the ten round Porsche Tag Heuer eSports Supercup is a marathon, not a sprint. Kevin Ellis Jr., Zac Campbell, Jamie Fluke, Jeff Giassi and Yohann Harth will return determined to settle the score at round three. On the thirtieth of January, the paddock reconvenes at Imola. Tune in to Apex Racing TV at 7pm GMT for the behind-the-scenes live stream of the RLL Esports and Apex Racing Team’s efforts.

Jamie Fluke: “A difficult one to take given the effort put in. Never have I driven a lap so well to be 25th on the grid and firmly in the mixer. Once there I was a passenger and could do nothing to avoid getting hit unless I wanted to full throttle the entire field. No points, not a happy camper. The one crumb of comfort is that I feel my driving is improving and hopefully if everything else gets sorted, I’ll be back at the sharp end of the field again.”

Yohann Harth: “Both races were a nightmare. I’ve been taken out in every single race this season, and there’s nothing I could do every single time. Pretty embarrassing driving standards for what’s supposed to be the top level of simracing. Full focus on Imola now, a track I love, but with what we’ve seen this season so far, I’m not looking forward to it.” 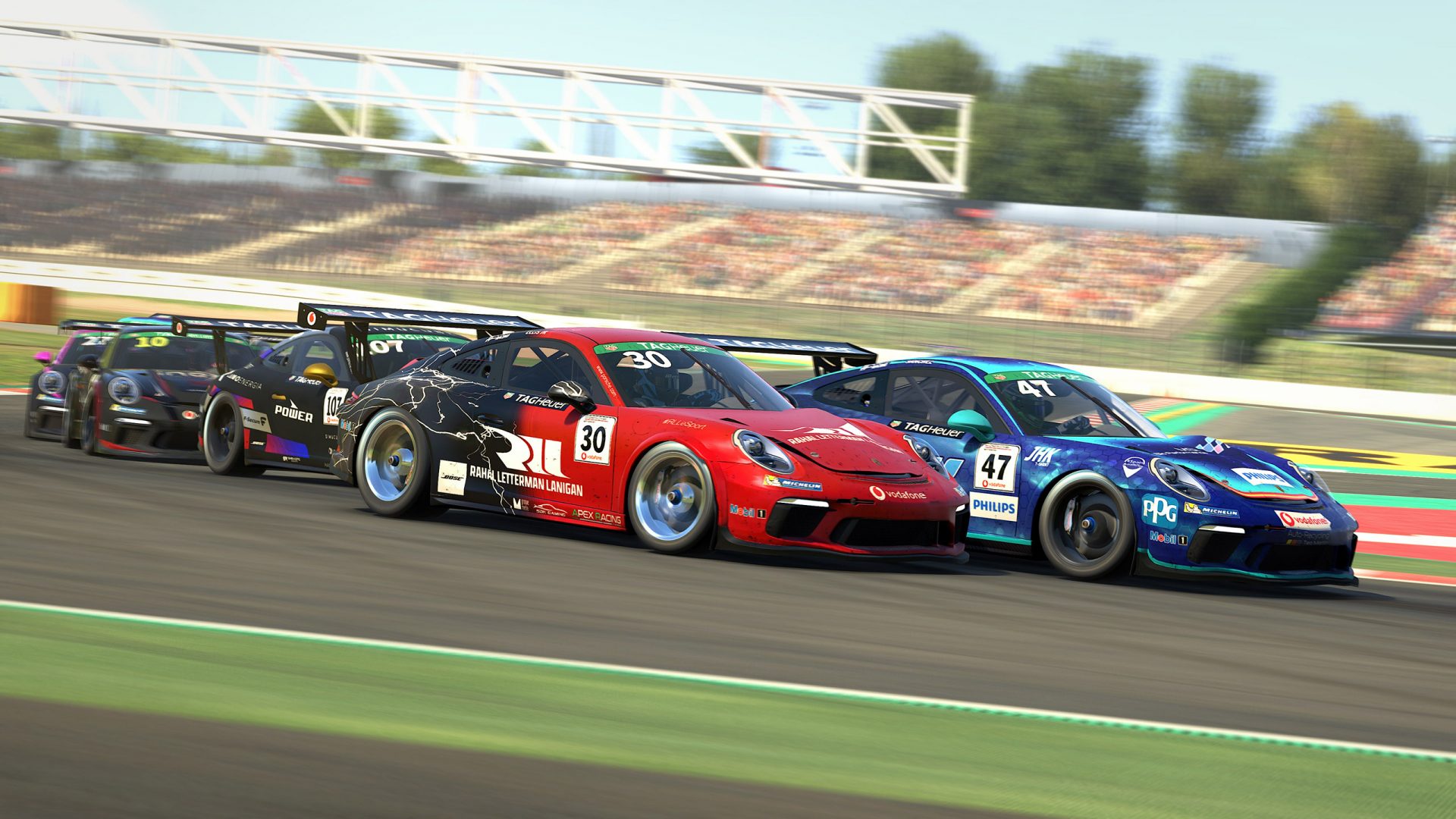 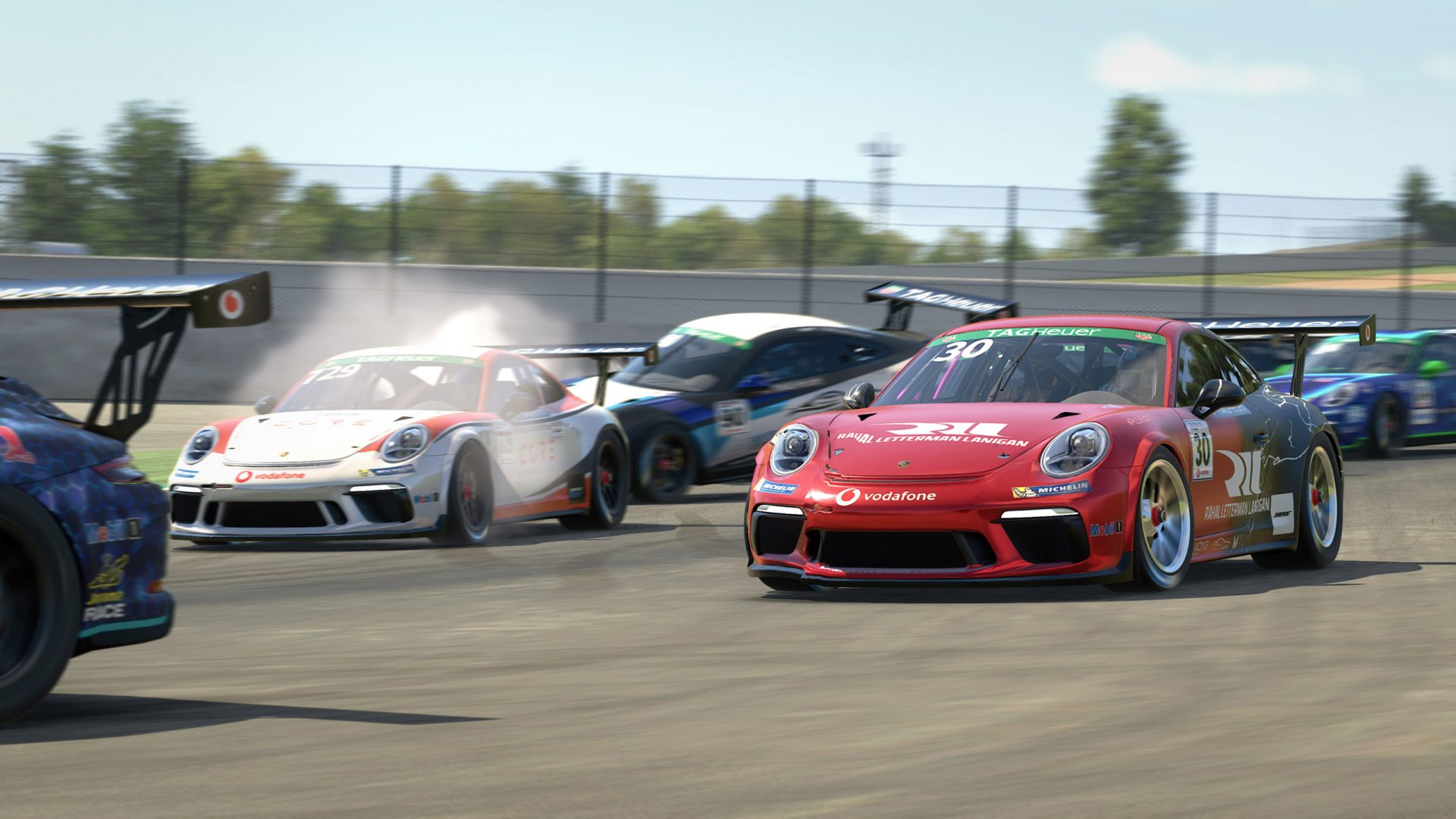