A gruelling week of qualifying placed the Apex Racing Team quartet of Michele Costantini, Brandon Traino, Zac Campbell and Yohann Harth on the front two rows of the iRacing Indianapolis 500 grid. From over a thousand hopefuls, just thirty-three of the world’s best oval racers earned the opportunity to take on the virtual edition of the world’s most famous race.

Brandon Traino arrived at the start line of the 2021 iRacing Indianapolis 500 with the opportunity to complete a historic hattrick of victories. However, the American’s toughest opposition would come from within the Apex Racing Team. Ironically, although Michele Costantini would be Traino’s toughest adversary, the Italian would also be his greatest ally in the crucial Indianapolis slipstream.

Following a rousing virtual rendition of ‘Back home again in Indiana’, the drivers formed up in pairs ready for the rolling start of the most important open wheel event in the sim racing calendar. 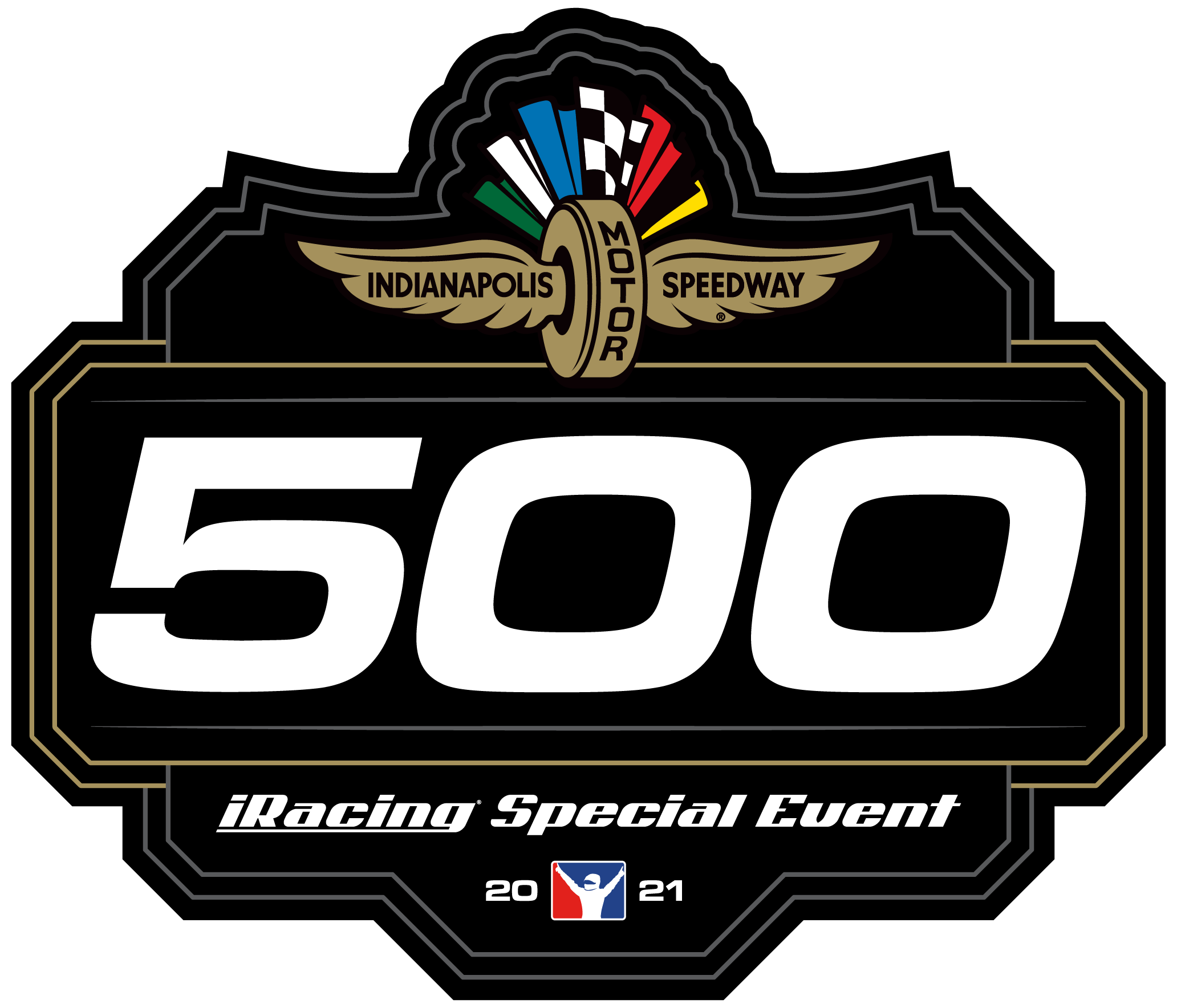 Despite soaring temperatures of over 130 degrees Fahrenheit, the Apex Racing Team quartet led in flying formation early on. Prior to the opening pit stop on lap thirty, Costantini and Traino had to negotiate lapped traffic on an alternative strategy. 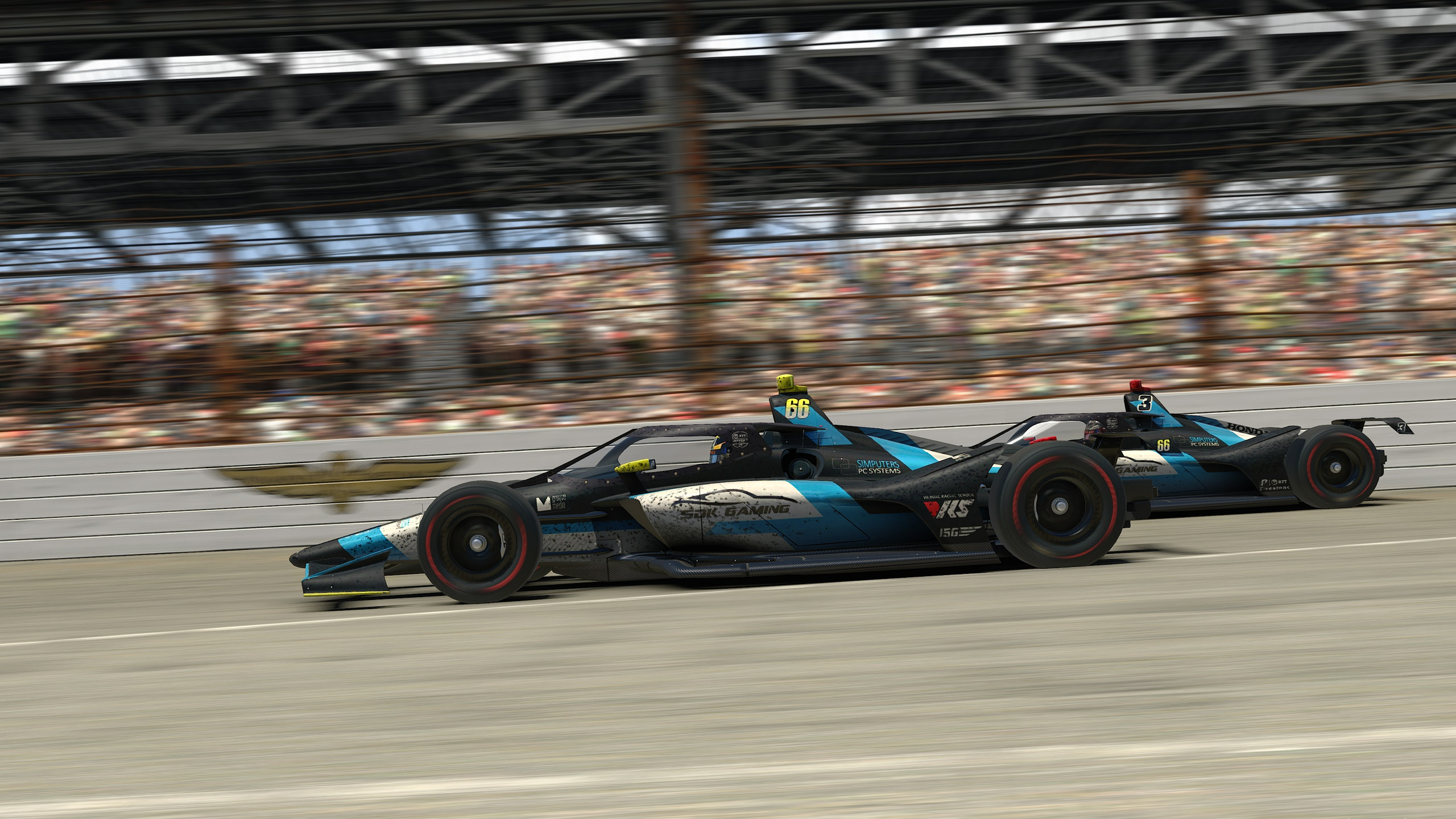 By lap forty, Campbell and Harth faced pressure from Wilson Neto and Christopher Demeritt, but pulled away with some disciplined co-operation in the draft. On lap fifty-six, a violent crash for Plinio Ferreria triggered the first caution period of the race. At this point, the Apex Racing Team fast four had yet to be broken at the front of the field.

Agonisingly, a fuelling issue for Yohann Harth forced the iRacing Rallycross World Champion to make a costly extra stop under caution. Thus, thwarting any chances of a charge for the win. Heading back to green, Demeritt had nestled in front of Campbell for third. However, the Georgian star soon dispatched with Demeritt to continue an Apex Racing Team 1-2-3. As Campbell kept Demeritt at bay, Traino and Costantini flexed their muscles and built a gap out front. 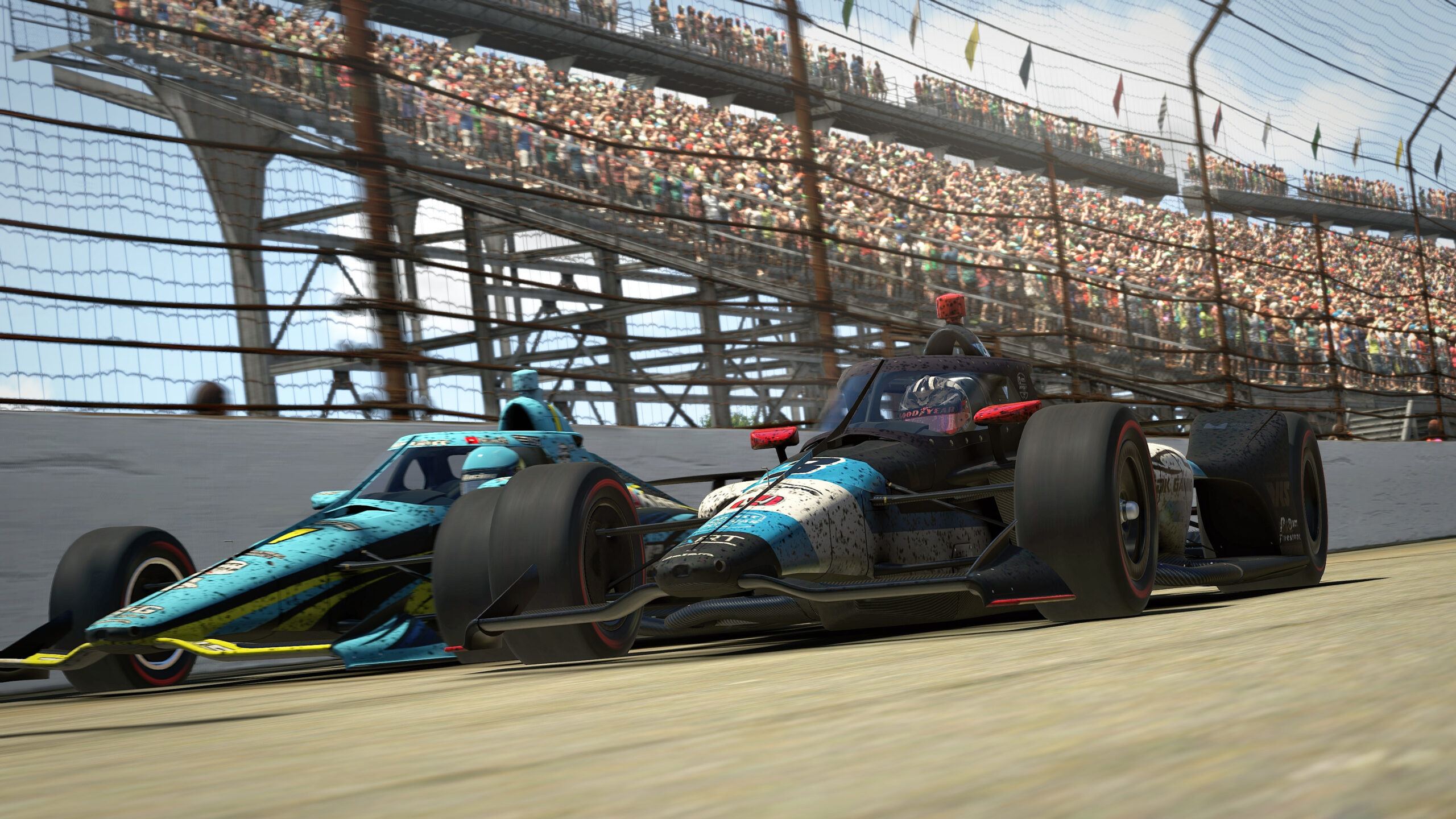 Over the next phase of the race, a succession of caution periods allowed the opportunity for strategy wildcards, but nothing could stop the steamroller of Costantini and Traino. Deploying an absolutely flawless display of co-operation akin to the Red Arrows, no one could lay a glove on the ART duo.

With sixty-one laps and around 150 miles to go, Costantini and Traino head to pit lane once more. A minor blip saw Traino overshoot his pit box, although only half a second was dropped.

Embarking upon the final quarter of the race, Traino/Costantini struggled to shake off an emerging Christopher Demeritt. Consistently quicker on pit road all day, Demeritt left Zac Campbell in a relatively distant fourth place. 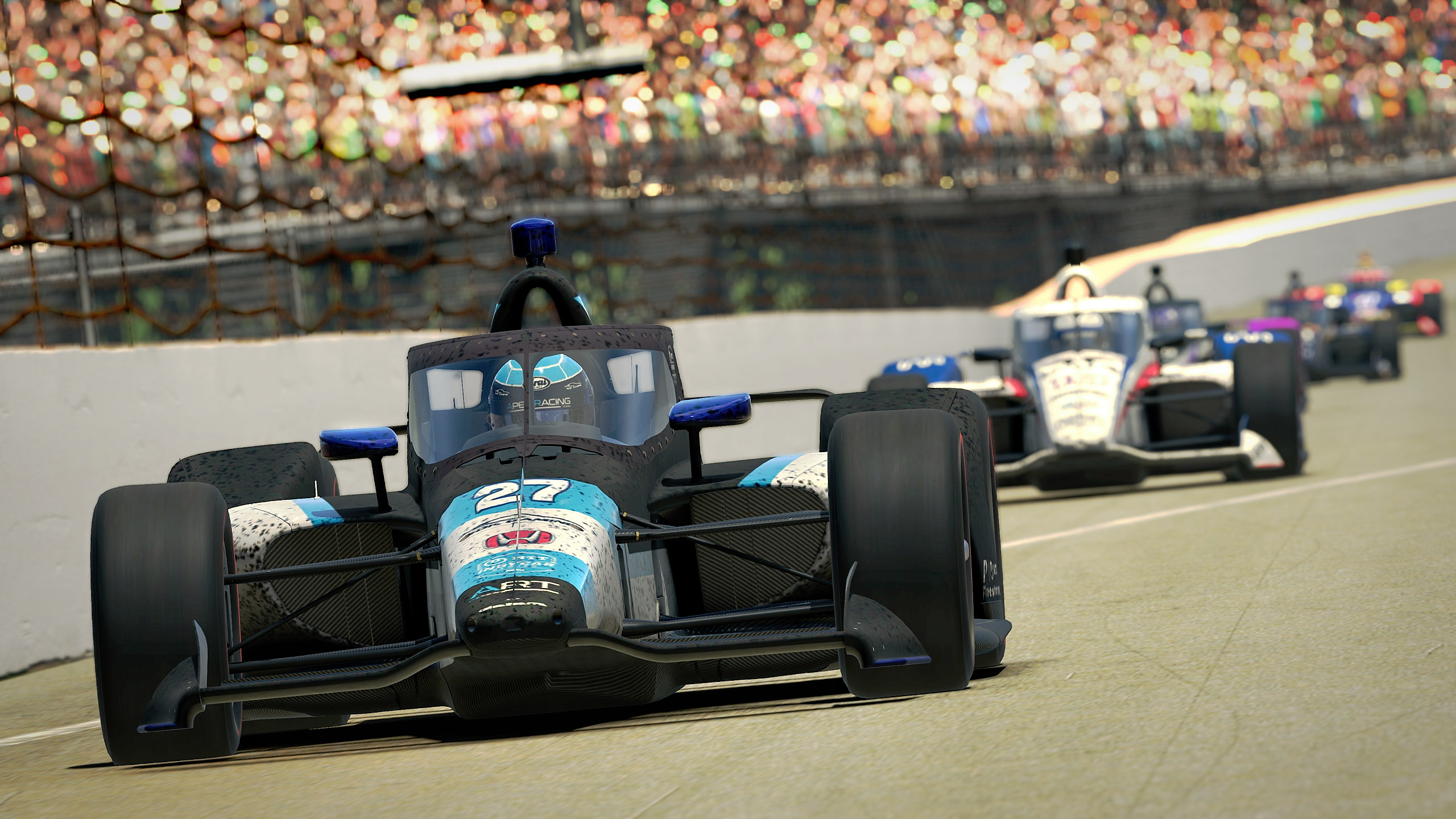 Thirty laps from the finish, the leading group took their final trip down pit road. Incredibly, although Traino and Costantini had led into the pits, yet another lightning pit stop leap frogged Demeritt into the race lead.

Immediately, the dogfight for Indy 500 honours ignited. Costantini and Demeritt traded the lead constantly, while Traino stalked behind in third. Not far behind, Zac Campbell held fourth. As the intensity ratcheted up with ever lap, Traino looked first to blink. A brush with the wall threatened to end the chances of a treble victory, but the American carried on.

Heading into the final stages, the gloves came off in an epic three car tussle between Traino, Demeritt and Costantini. On several occasions, the leading trio surged into turn one three abreast. Eventually, the deadlock severed in dramatic fashion. With fourteen laps to go, a slight wobble on the short shoot between turn one and two sent Traino up the racetrack and into the side of the luckless Demeritt. Unable to react, Demeritt’s Dallara slammed into the wall. The #1 car was out of the race.

With no time to dwell on the incident, Traino and Costantini continued the now two car fight for the win. Two laps to the finish, Traino had the crucial advantage and began to weave to break the slip stream for Costantini. The exquisite co-operation in the slip stream was over. Despite the most intense pressure from Costantini, Traino held on to pull off a historic iRacing Indianapolis 500 triple crown. 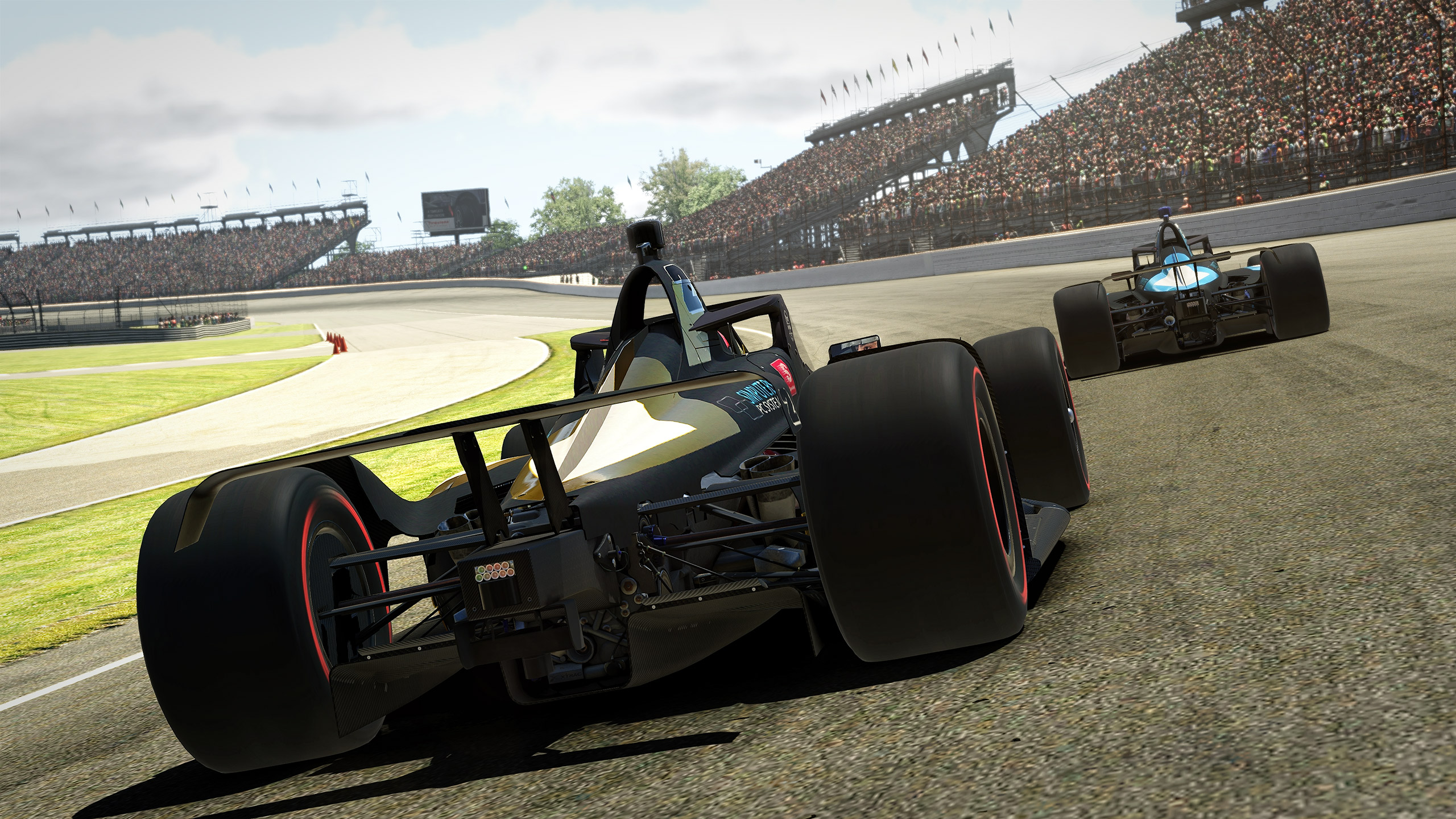 Zac Campbell crossed the yard of bricks in the wheel tracks of Costantini and Traino to finish third and complete an Apex Racing Team sweep of the podium in this years iRacing Indianapolis 500.

Despite his early troubles in pit road, Yohann Harth valiantly fought back to eleventh position. 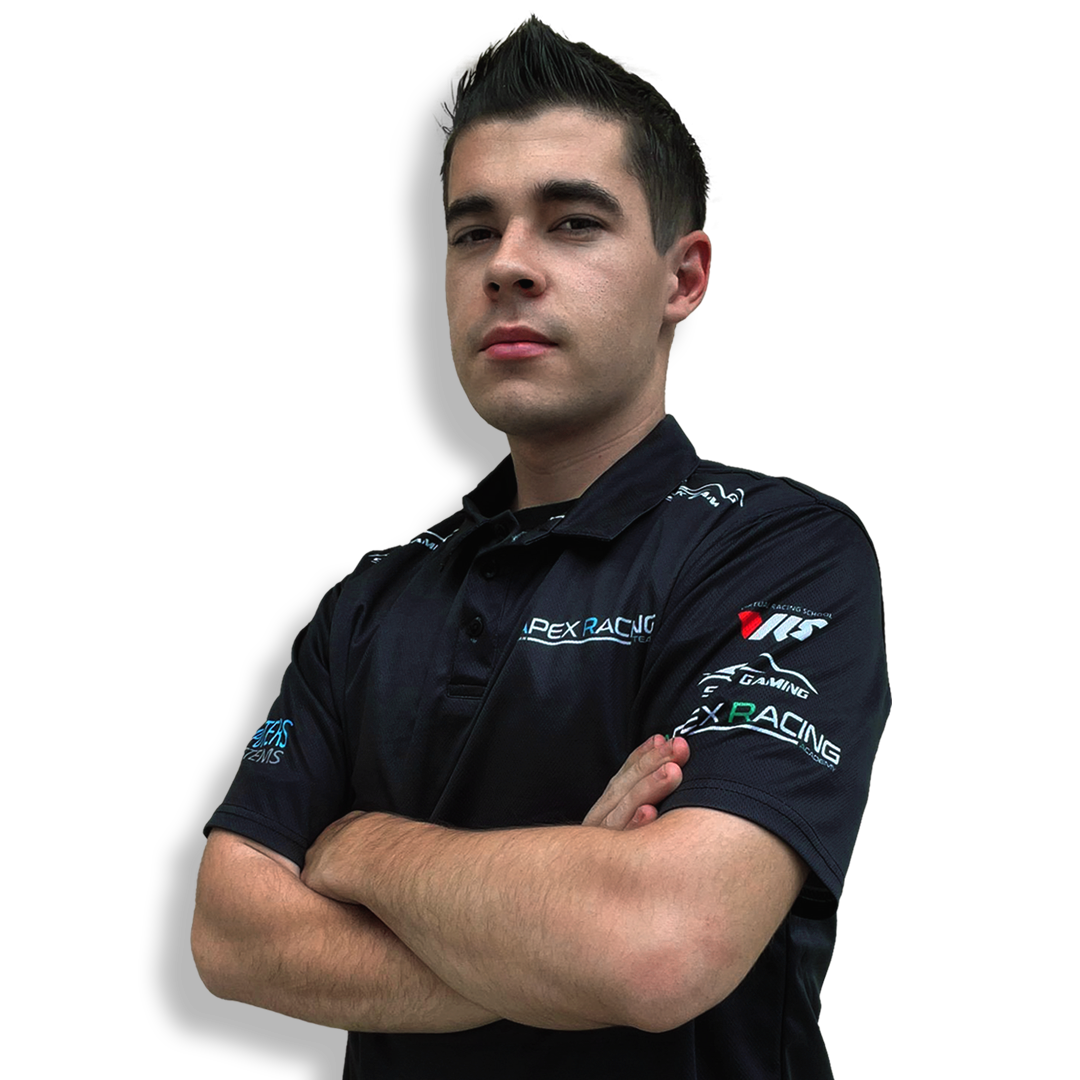 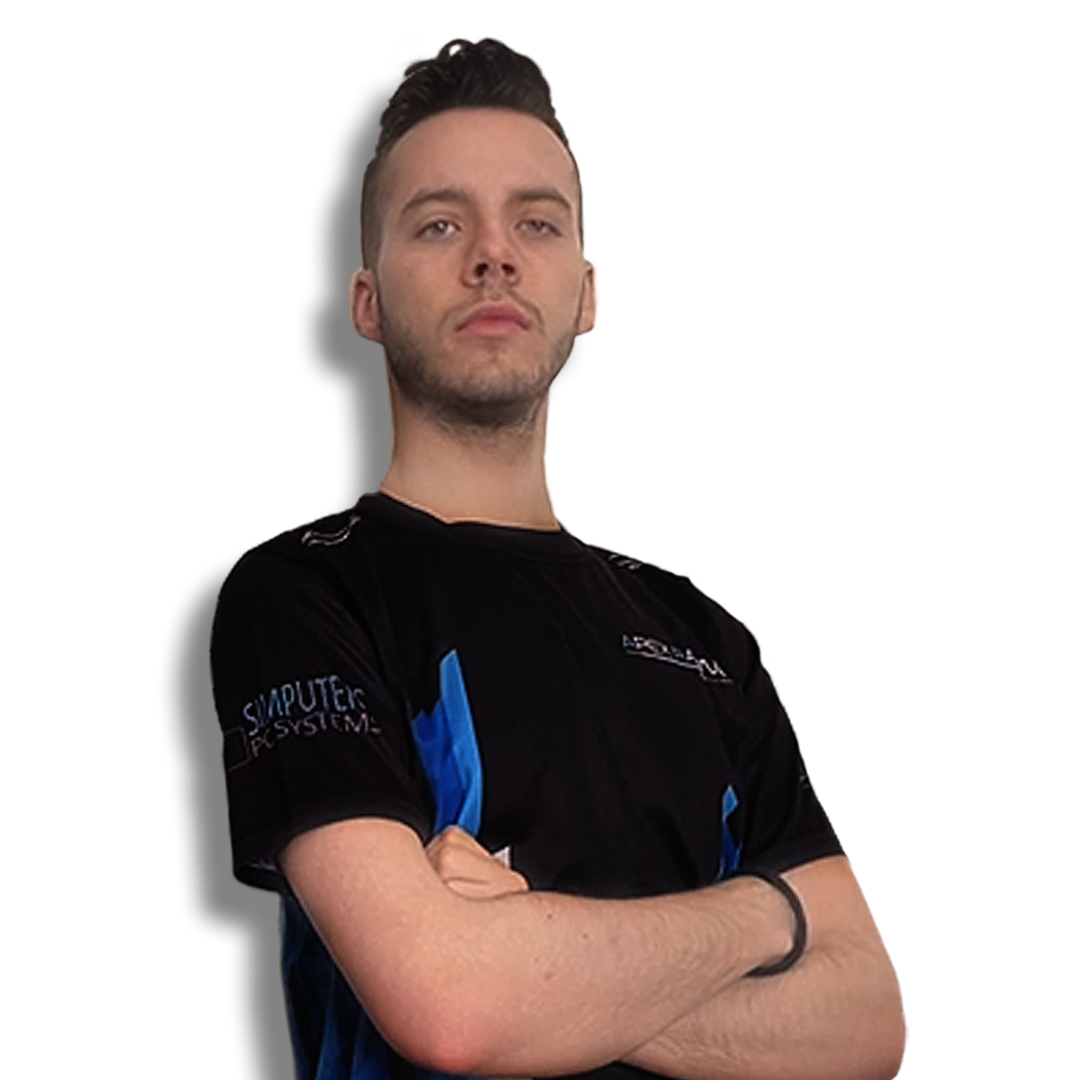 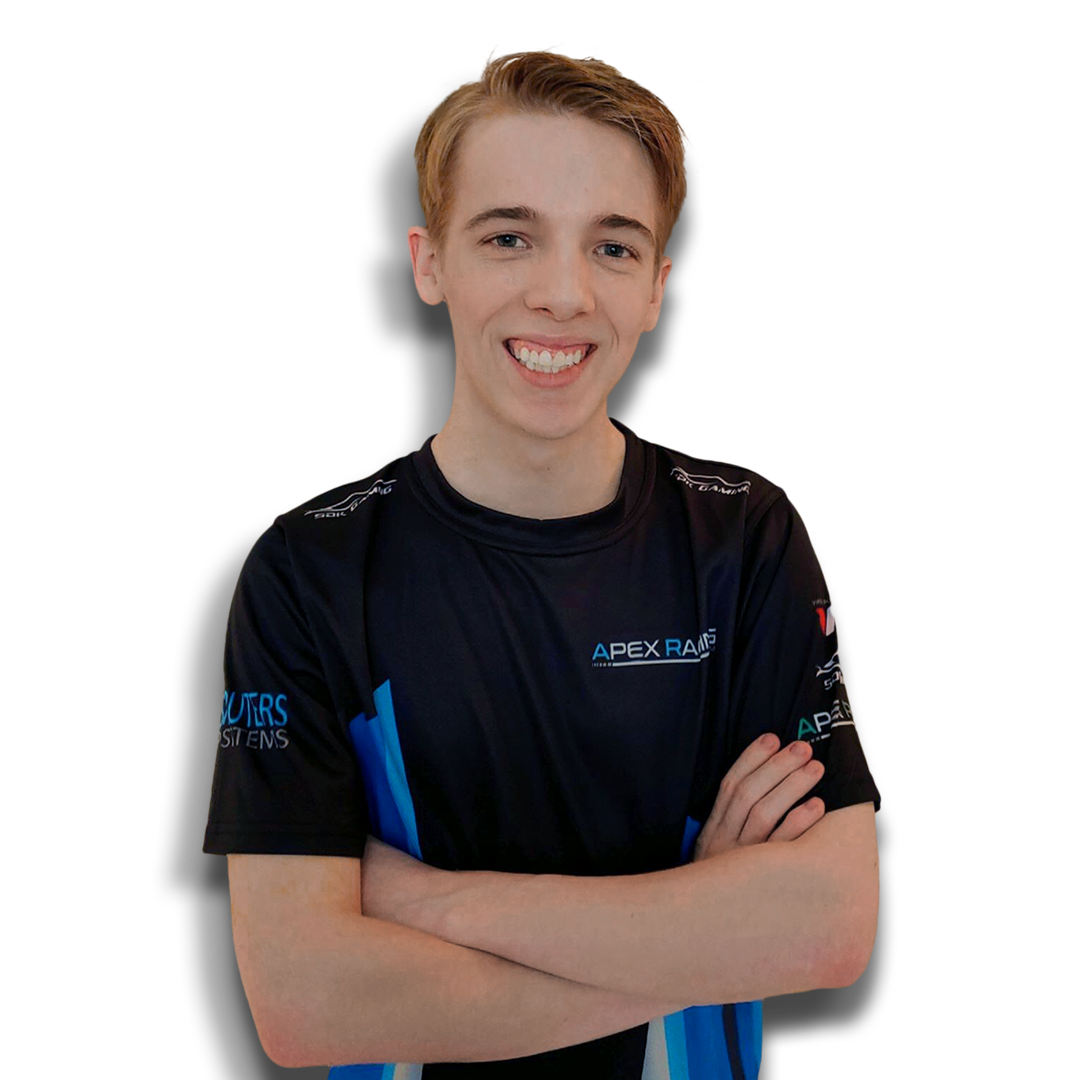 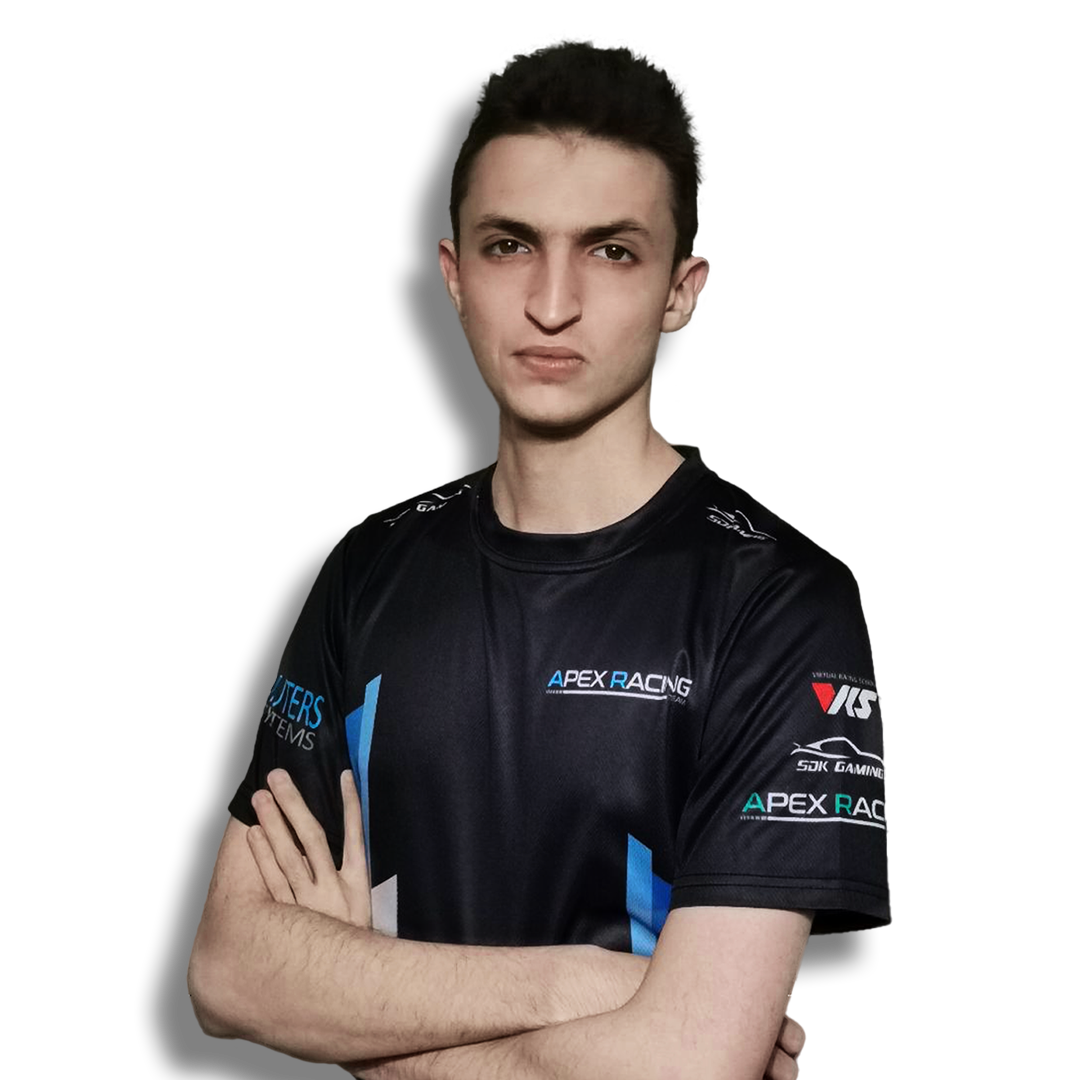 “This week was nothing short of incredible. Locking out the first 2 rows in qualifying with the team gave us a huge confidence boost going into the race. During testing, I preached to the team, that if we could control the race, it was ours for the taking. We did just that, leading 199 of 200 laps as a team, and sweeping the podium. The race went perfectly. We ran up front all day and dominated all day long.

Coming into the race a lot of people counted me out of having a shot to win 3 in a row. I put more time and effort into this race than years past because I wanted to prove them wrong. My strategy was to stay up front all race, (thats where im most comfortable) and be there at the end. It wasn’t easy, I had get by two of my teammates at the very end, but I made a risky move at the end and it paid off. To win 3 in a row and be the only person to do it is something pretty special. No one has ever won twice in this race, let alone 3 times in a row. It’s pretty awesome that the achievement may never be broken.

I also cant thank my teammates enough. They were incredible all through testing. We worked so hard trying different setup ideas and tweaking the car so it was just right come race time. And it was perfect, I couldn’t have asked for a better car. So shoutout to the guys on Apex Racing Team and Team I5G for making this all possible. I couldn’t have done it without them

“To finish 1-2-3 at a race like the Indy 500, which is a combination of having a good car, a good driver, good strategy and luck is an incredible achievement for us. This was my fifth year in this race and I feel like the win is getting closer and closer each year I take part. This time I was also able to take pole position during qualifying week which I’m really proud of.
The strategy was really simple for the first part of the race: swap draft with Brandon and try to create a gap. Worked out really well until the mid race cautions, which brought the pack back together. From there, for me, it was just a matter of making 30 laps each stint until the end, which would require a bit of fuel saving every stint. Ultimately, in the last stop, Chris caught me and Brandon and made it a little harder for me to save fuel, so I had to do it for longer than I really wanted to for that last stint. Then, with 5 to go, I was good on fuel, but Brandon was already ahead and ready to defend, driving that middle line to give me dirty air made it impossible to catch him back up and I finished 2 tenths away from an Indy 500 win. Very disappointing in the moment, but what we did as a team is incredible and will be extremely hard to replicate in the future.”

“Man I can’t be anything except happy for the team, and a bit disappointed in myself. Love coming back to Indy every single year, and I can feel myself getting better and better every year that goes by. We had everyone absolutely covered this year, and I can’t be more pleased for Traino and everything he’s worked for. He’s put so much time and effort into this race and for it to give him that result only fills me with a lot of joy for him! I’m a bit dissapointed in just me making mistakes. I felt like we had a decent shot there working with Chris Demeritt for a decent part of the race behind Michele and Traino, and I felt like I was setting myself up to have a late race run at those two, but I made a mistake by getting a little too high on weight jacker in clean air and it let Chris get around me. From there on you’re just chasing the car with more than 2 cars in front of you and I got all the good out of my tires by the time Chris had that really unfortunate netcode with Traino. I can’t be more pleased with the team for a 1-2-3 and provided such a damn good race car, but being so close at Indy may as well be finishing last.”

“A bit gutted after what happened to me during the second pitstop but what a week for Apex! Even if P11 at the end is a bit frustrating after starting P4, I cannot be disappointed after such a performance by the whole team. The race was done for me after that pitstop but I learnt a lot of things that may turn out to be super important coming into the ISOWC Indy 500 in July. Better luck next time I guess, but again, congratulations to all the guys at Apex and I5G, and to Traino for another incredible performance.”

In this historic month of May, the Apex Racing Team have exhibited world class credentials once again. All thanks to a herculean work ethic, the open secret to the ART winning formula! 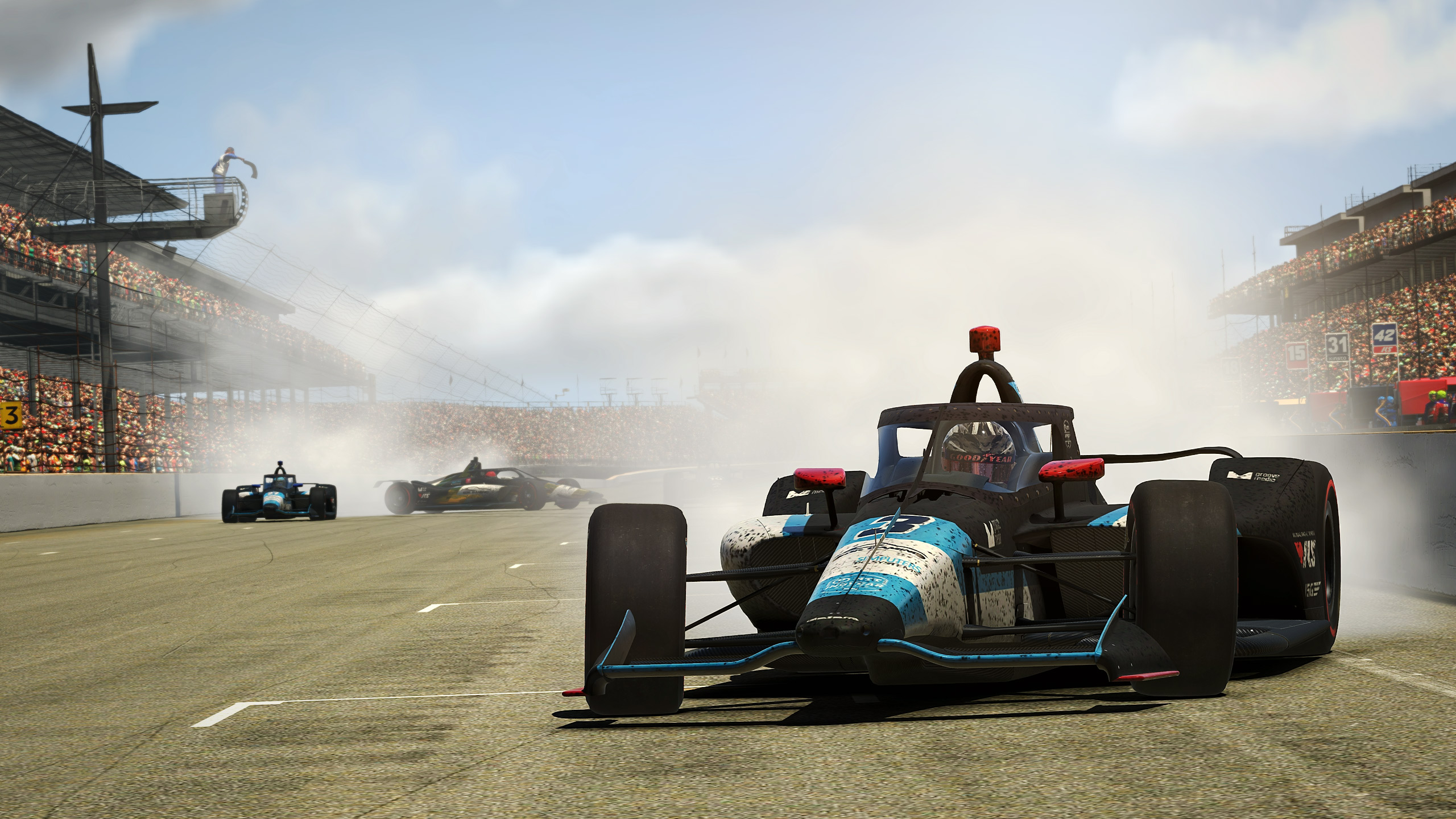