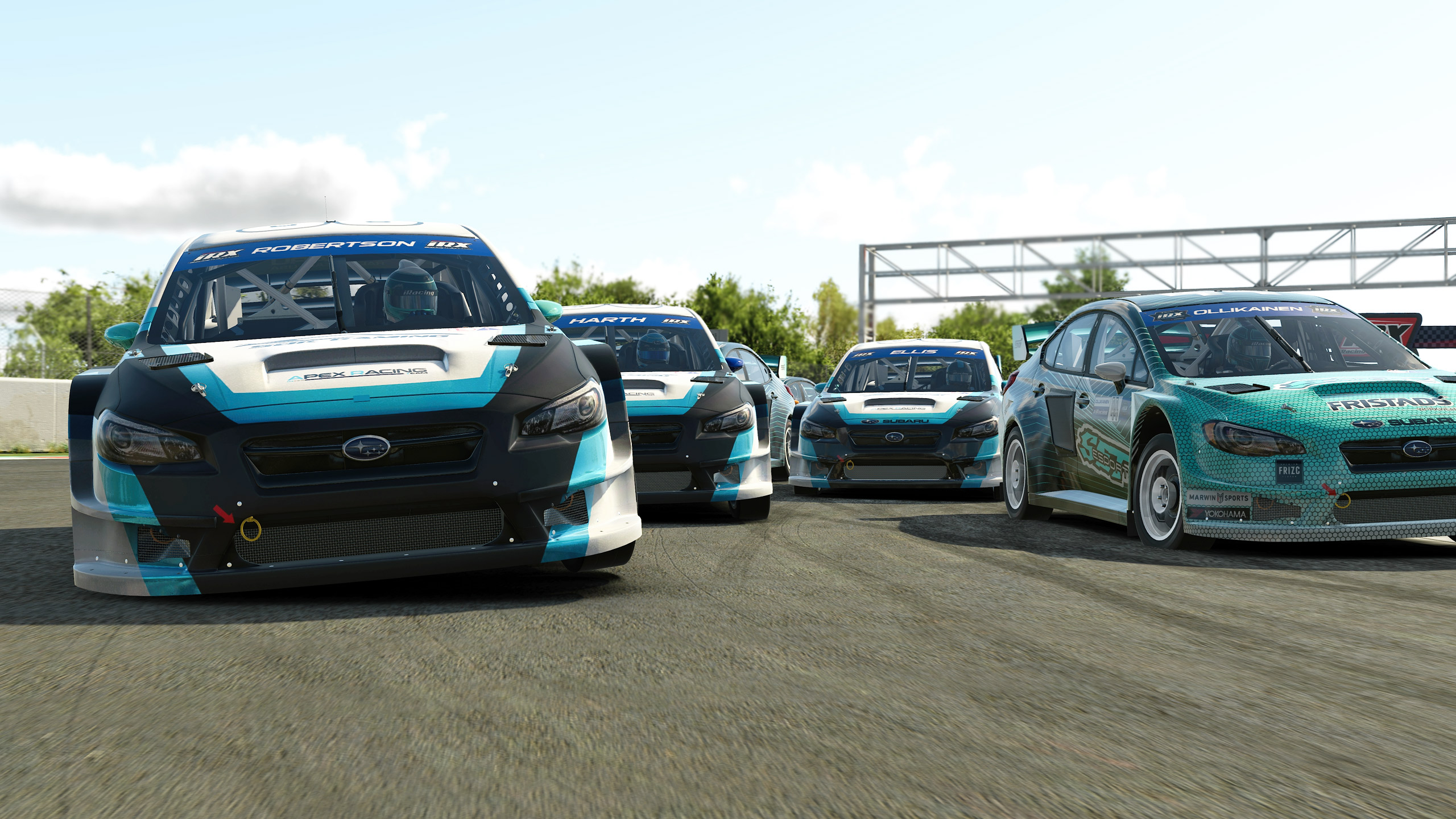 By Peter MacKayMay 7, 2021No Comments

Apex Racing Team’s elite band of dirt racers headed to Circuit de Barcelona-Catalunya for the second round of the iRacing All-Star Invitational. As the top two drivers from last year’s iRacing Rally Cross World Championship, Yohann Harth and Jon Robertson lead the band of Apex Racing Team Subarus into battle. Although relatively new to the dirt, Kevin Ellis Jr. has transferred from his RLL Porsche 911 to the four-wheel drive Subaru with incredibly ease. Mind you, fast Scots do have history in blue Subarus!

In qualifying, Robertson, Harth and Ellis Jr. narrowly missed out on the quickest time but occupied the rest of the top four. Thus, enjoying prime grid positions for their respective heat races.

World championship runner up, Jon Robertson, was first up for Apex Racing team. Starting from pole position, the Aylesbury ace enjoying a blissfully clear view to turn one. Negotiating a tense opening lap through the narrow confines of Barcelona’s rallycross layout, Robertson calmy fended off the challenge from behind. Deploying a relentless pace, Robertson continued to build his advantage and sealed up a comfortable heat win.

Next up, reigning World champion Yohann Harth started heat three from the front of the pack. Enduring even more intense pressure than Robertson, Harth resisted a continually stern challenge from his fellow Frenchman, Lucas Dall Olmo. A cunning late joker lap strategy from Tommi Hallman set up a dramatic charge to the flag, with Harth winning by a whisker. 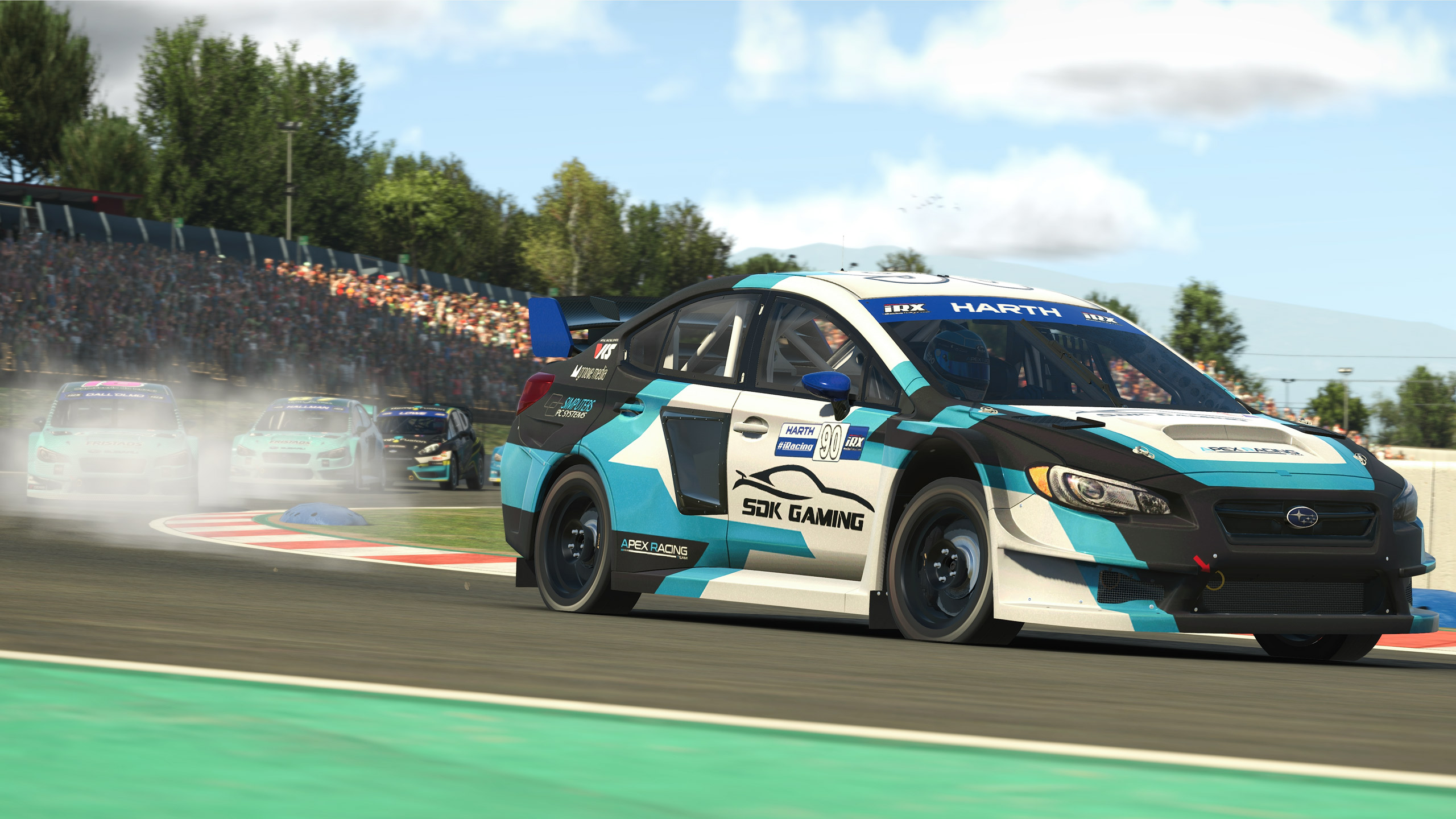 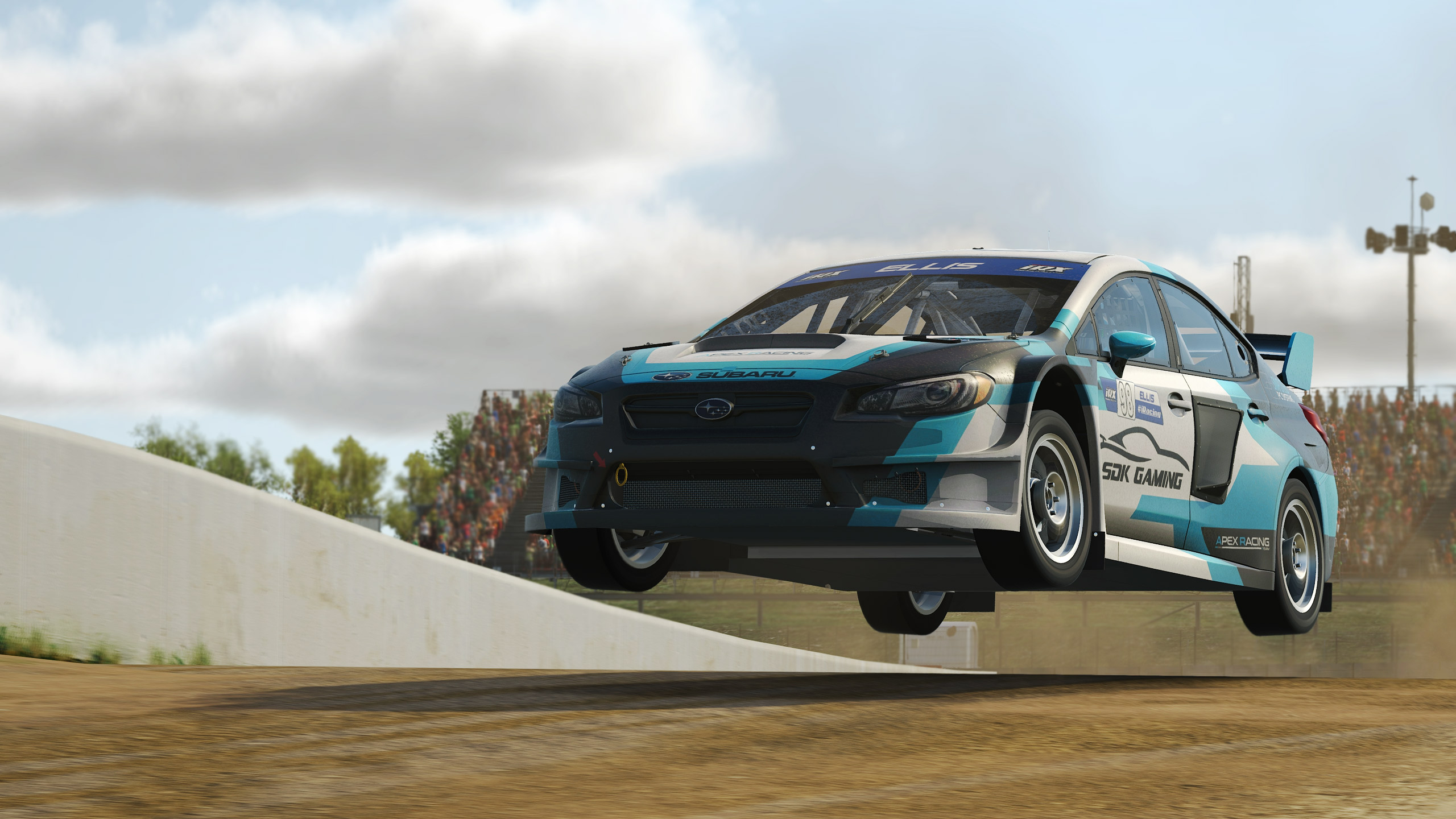 Kevin Ellis Jr. enjoyed his first pole position start in his topflight rallycross career in heat four. Starting behind Ellis Jr., Jake Robertson enjoyed a strong grid position to transfer automatically to the feature race. While Ellis Jr. launched cleanly into the lead, Jake Robertson suffered in the mid pack melee. Engaging in a stern battle with Luis Nunez, Ellis Jr. looked to be in control after a scrappy joker lap for Nunez. Exiting the joker lane on the final lap, an errant Nunez clattered into Ellis Jr’s Subaru, snatching the win in controversial circumstances. Furstratingly, Jake Robertson would miss out on an automatic transfter to the feature by one positon.

Despite a tenacious effort, Jake Robertson fell agonisngly short of a feature spot in the last chance qualifier. However, with a better run of luck, the British star will surely be up at that sharp end.

Heading into the feature race, Apex Racing’s rallycross experts Jon Robertson and Yohann Harth started up at the sharp end of the field. Ellis Jr. began the main event from eighth on the grid. Unfortunately, Harth and Robertson’s charge for the win was thwarted almost immediately. Snared in an violent incident, both Harth and Robertson faced a long fightback. Nevertheless, all was not lost. Picking up the mantle for Apex Racing Team, rallycross rookie Kevin Ellis Jr. sneaked through to second place by the end of lap one. Proving this start was no fluke, Ellis Jr. resisted pressure from rallycross royalty and claimed a magnificent second place finish. Despite the earlier incident, Jon Robertson clawed back to fourth position by the line. 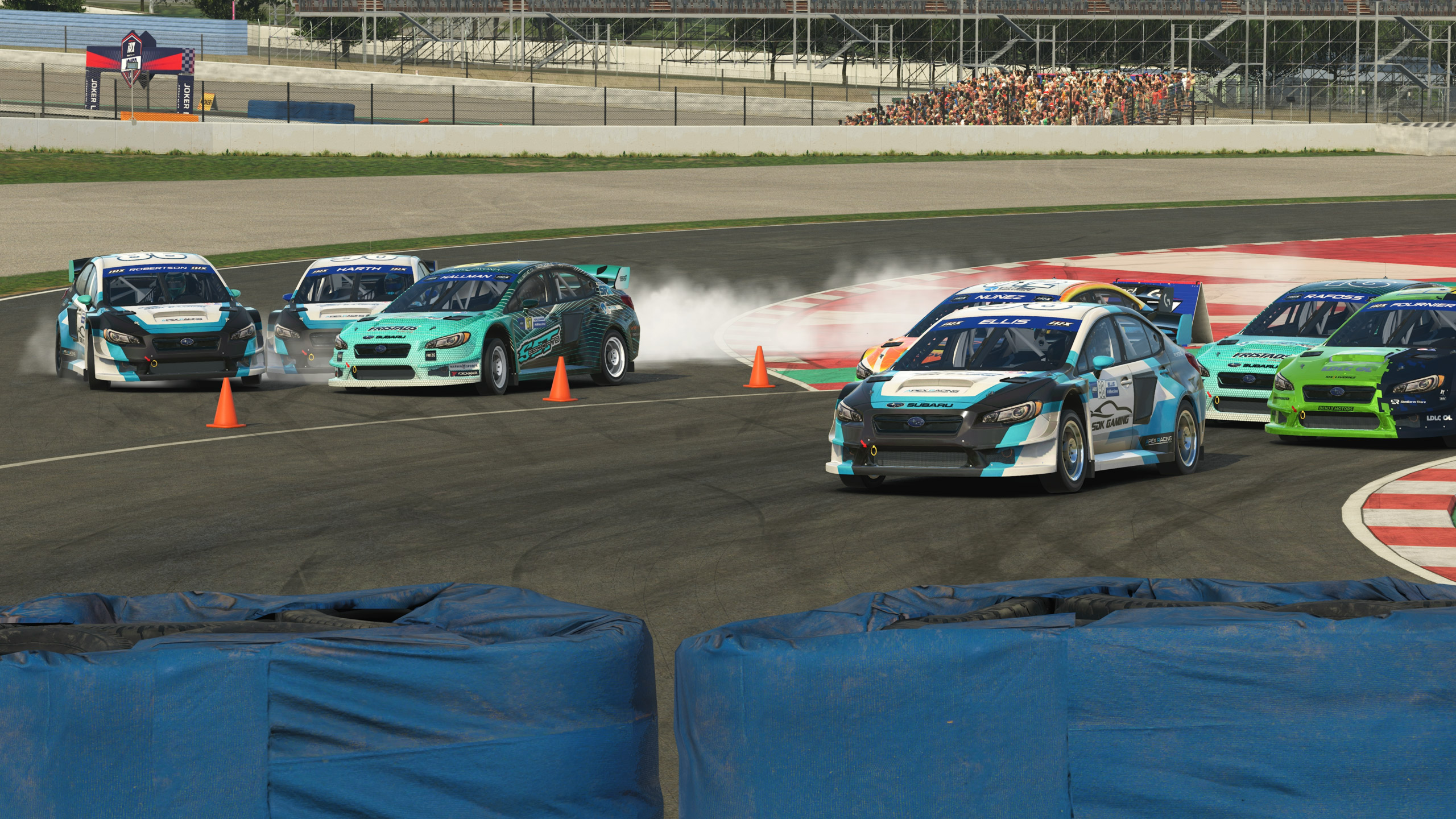 Kevin Ellis Jr.: “Really positive result from Round 2 of the iRX All-Star Invitational! Was a brand new track for me and only had about 4 hours of total track time before the event so to come away with a P2 is unreal! Made a mistake on Lap 1 of the Feature causing a crash which I’m unhappy about but lessons were learned and experience was gained. Straight into Atlanta now where hopefully I can continue learning and fighting at the front.”

On the 11th of May, the iRacing All-Star Invitational rolls on to round three at the Atlanta Motor Speedway. 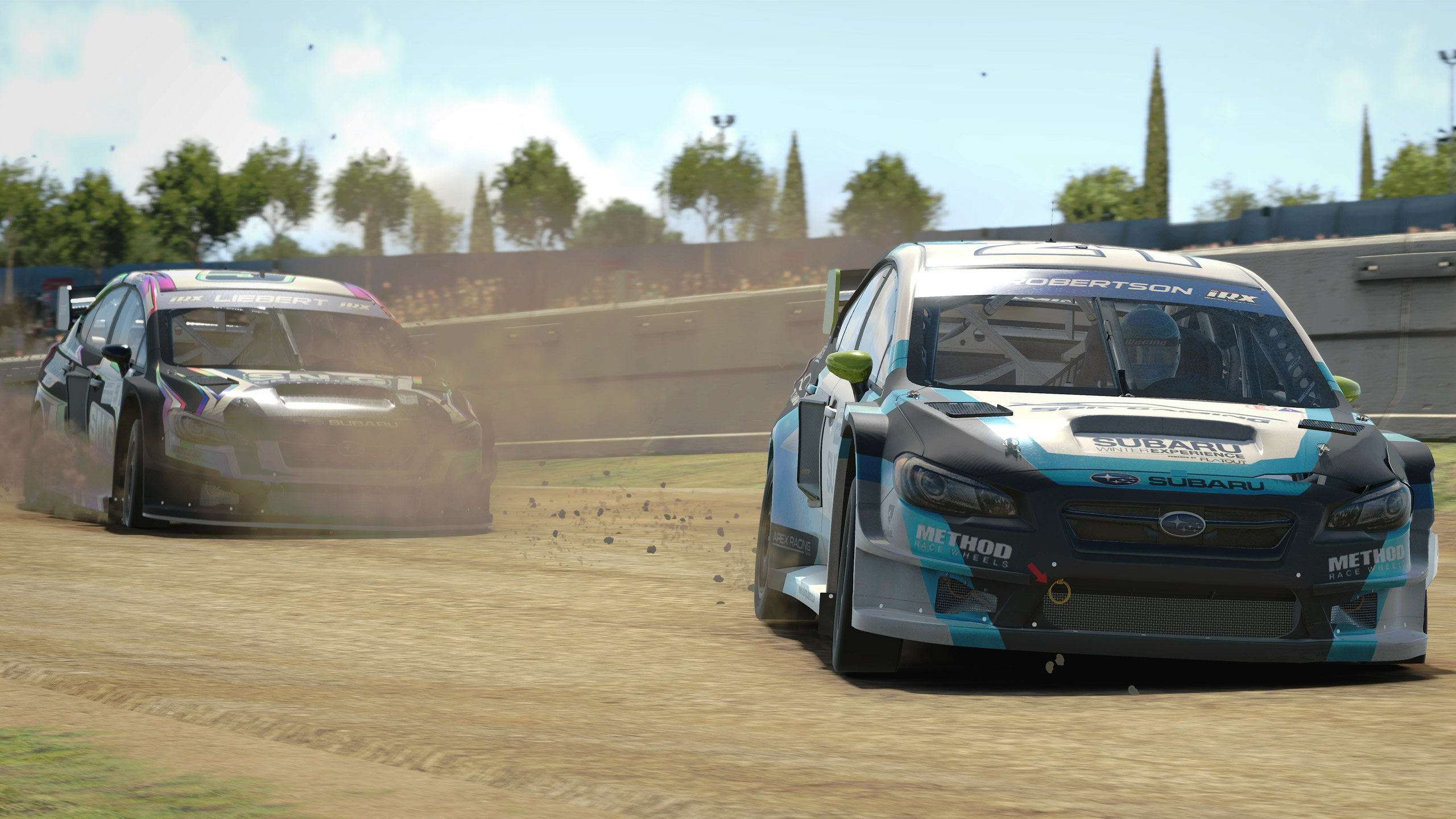