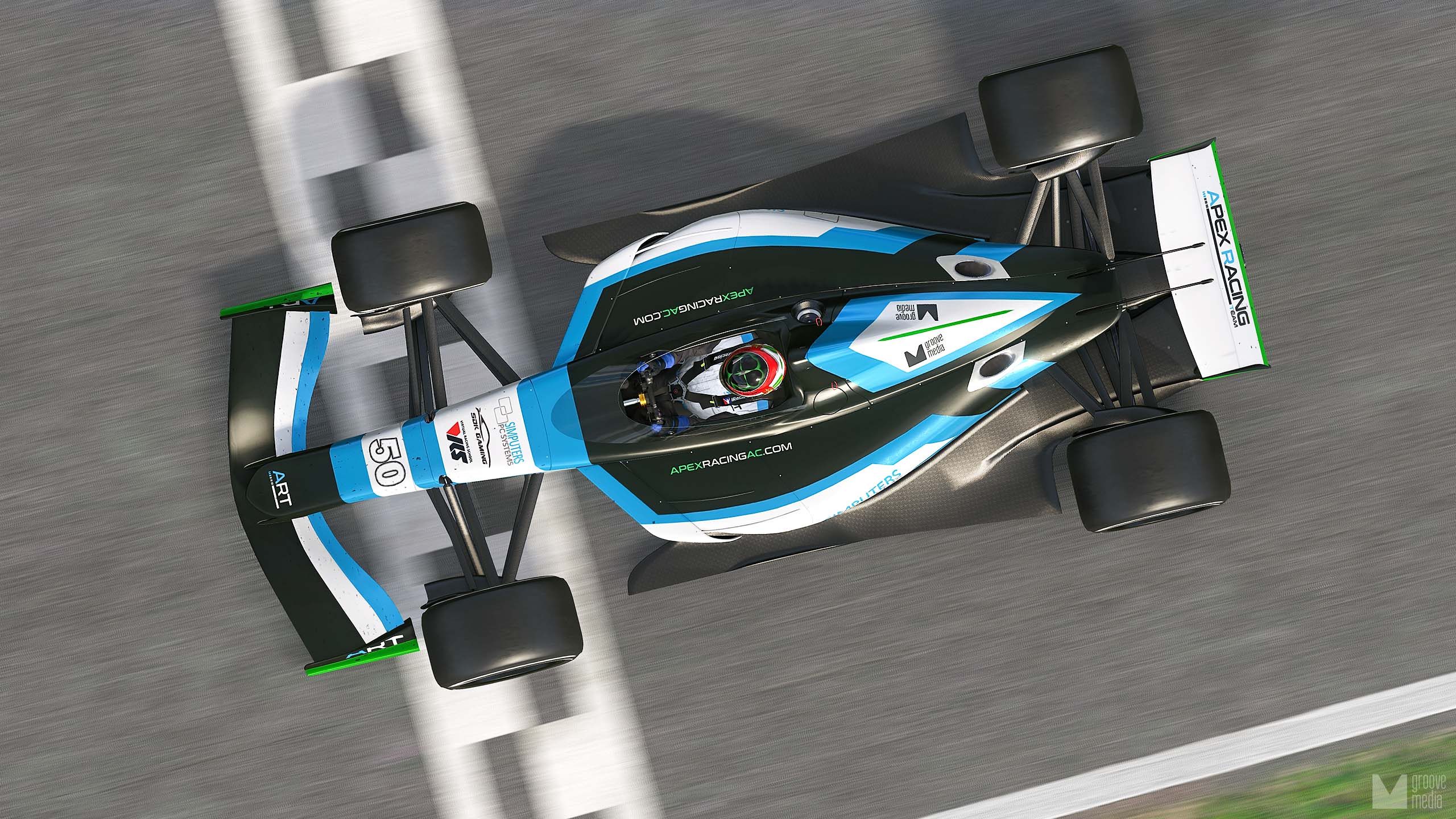 By Andy TaylorNovember 27, 2021No Comments

A tense final round see’s the championship settled

So this was it.

The final round of the iRacing Force Dynamics Dallara iR01 Championship. Weeks of battling with Maarten Van Loozenoord and R8GEsports had resulted in the slimmest of leads for Peter Berryman. 2 points.

It was if the rest of the championship hadn’t mattered, 1 race would settle it. No second chances this time, no recovery drives in a subsequent race, no get out of jail free cards, just beat Maarten. It was a simple goal. But if the rest of the championship was anything to go by, the actual race would be as complex as you’ll find anywhere. Different tyre compounds, different pit strategies, different team strategies, lapped traffic, everything would have to be overcome.

Who would become the ir01 World Champion?

As the qualifying clock ticked down it was clear Peter hadn’t had his best run, nerves? Playing it too safe? Just a mistake? 6th was where he was to start from in this title decider. He needed help from his teammates now.

Up steps Yohann Harth. Blistering in practice all week, if he could replicate that when it mattered, and be in front of the R8G cars, he could control the pace, and give Peter the chance he needed to get into the mix at the sharp end.

Pole will do it. Pole is what he delivered.

With Michele Costantini putting the SDK Gaming car on the second row in 3rd, and Maarten only managing 4th (just behind R8G teammate Lemanek) it was 3 vs 2 in the top 6. Ben sniffing around the back of the pack in 8th, it opened up some options, but certainly wasn’t plan A. It was time for the strategists to do their thing and work out a new plan.

50 laps of the Hungaroring lay behind the red lights on the Start line and a possible World Championship. The tension across the voice and chat channels was almost unbearable. It was time to deliver one more time.

Lemanek with a blistering start and the inside line into T1 just edges past Yohann, leaving Michele and Maarten fighting side by side  for 3rd and 4th.

Until T2. Yohann with a send down the inside of Lemanek catches him by surprise and was back in front by T3. The initial first corners melee settled down, and we find ourselves Apex > R8G  > R8G > Apex > Apex, Peter at the back of the train. That’s ok. There is a long way to go. 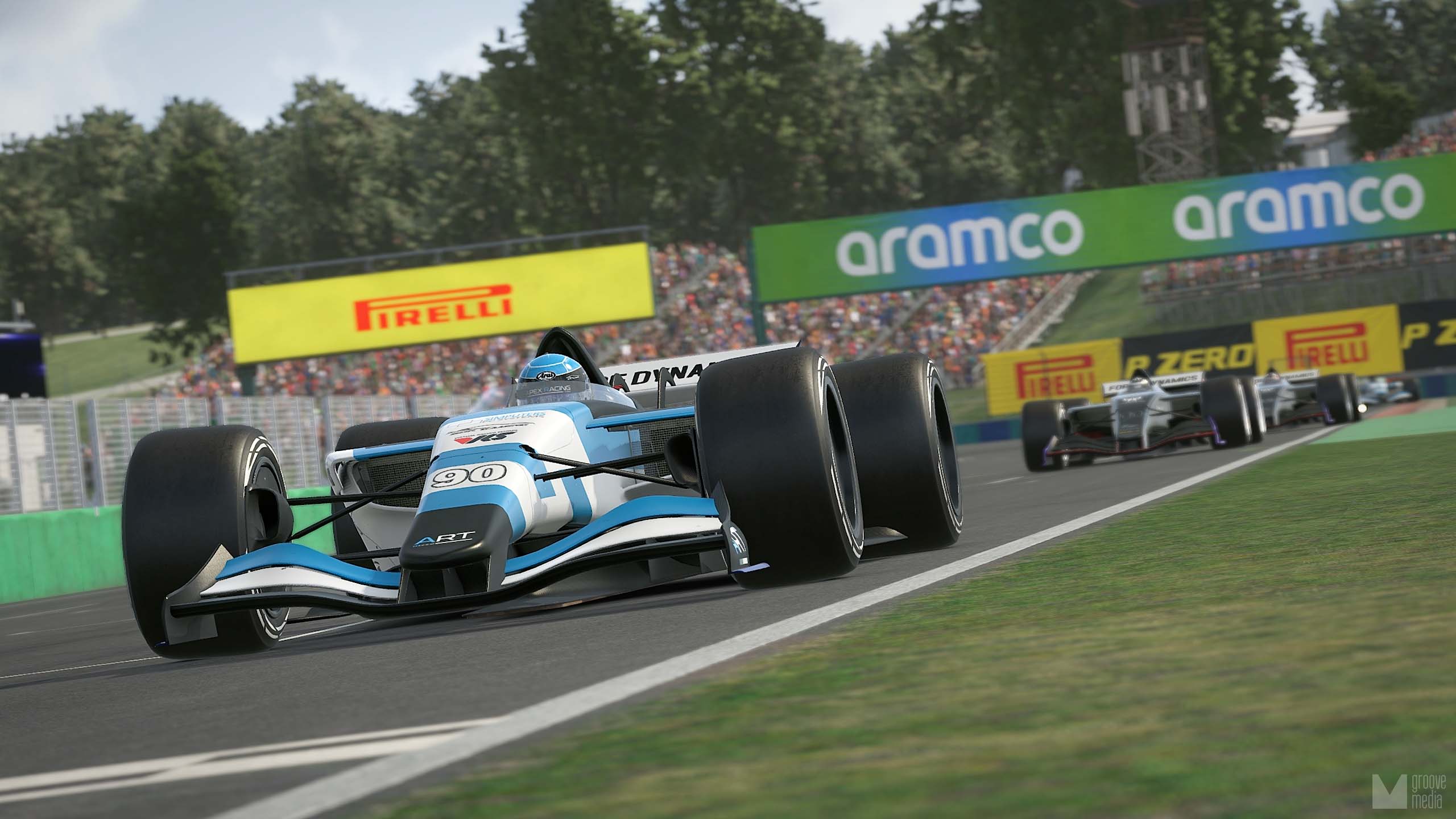 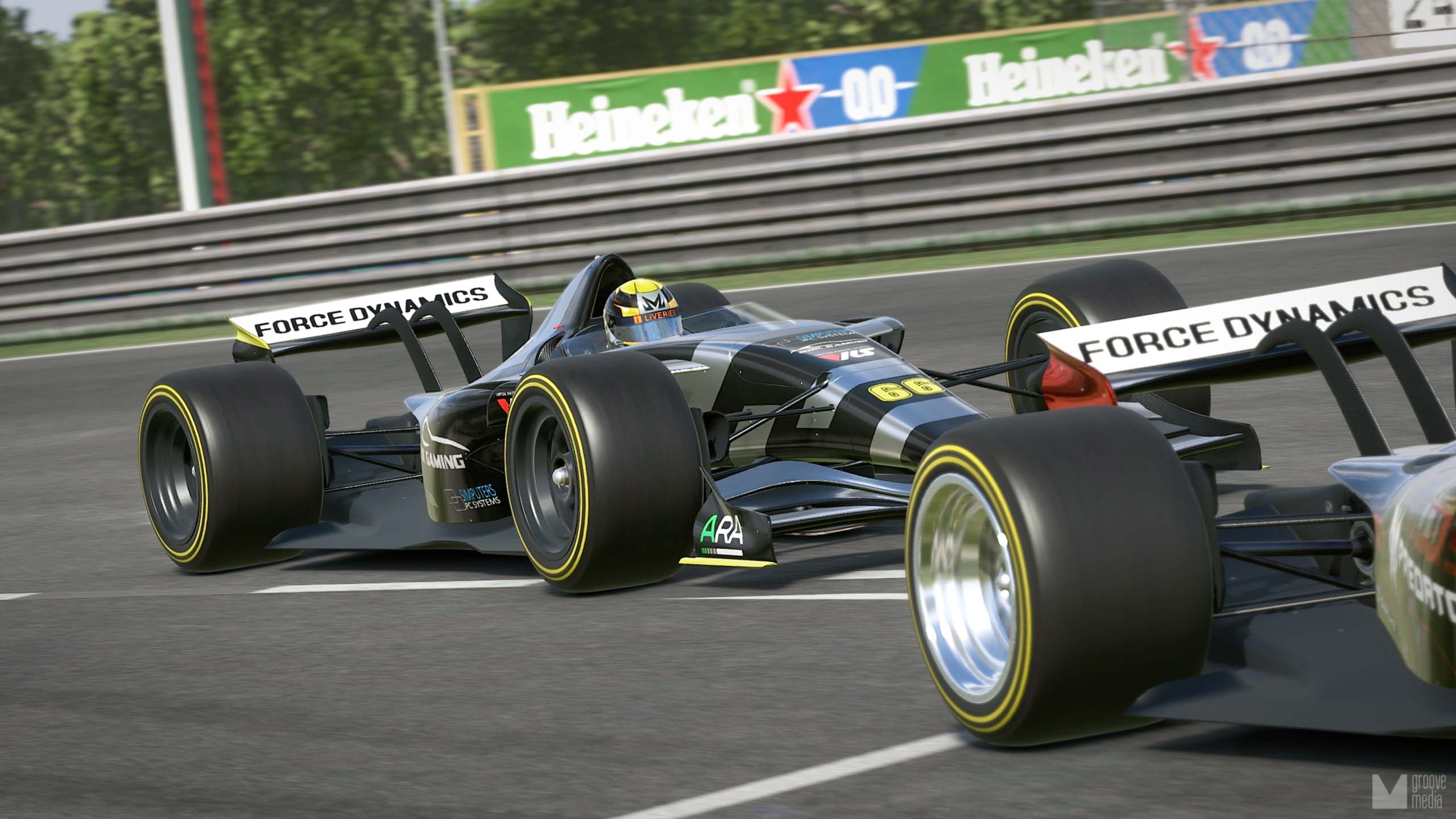 Not for Ben though. T2 was as far as he would go today as a missile in the shape of Sam Kuitert, with a huge miss of his braking point, destroyed Ben’s chances of getting in the fight to support Peter. But never one to give up, and we’ve seen him come through the field before, he shook himself on and got back on it. Only for a spinning Nunez piloted Dallara to properly end his day just a few corners later. It really was game over now for Ben.

The top 5 didn’t change until Lap12 when Maarten, Michele and Peter dived for the pits leaving Yohann out for a bit of ‘temps de marteau‘. The next 21 laps were cagey as the 2 teams battled for positions, changing strategies and pitstops on the fly, to try to get the upper hand. It was looking like this was going to go to the last couple of laps, and we’ve seen Maarten come through the pack at the last minute before. Surely not again?

And then Lap 33 happened.

Peter had been hunting Maarten down consistently, clearly in a faster car, several looks into T1 almost came off on the previous laps, but Maarten held his lines and his nerve keeping Peter behind. It was looking inevitable that the Apex car would pass at some point now though, the R8G car just appeared to not have the pace.

Closer than ever at the end of the straight into T1, Peter had the inside line on the right-hand corner’s apex, and he held it, and held it, tracking out slightly as they straightened up, only to find the R8G car attempting to shut the door. But it was too late. Peter was alongside. And right there the championship was decided. The cars touched wheels, the roll of the ‘who is going to come off worse dice’ was thrown. And this time, for a change, luck fell Peter’s way as Maarten spun left and off the track, and out of the title fight. 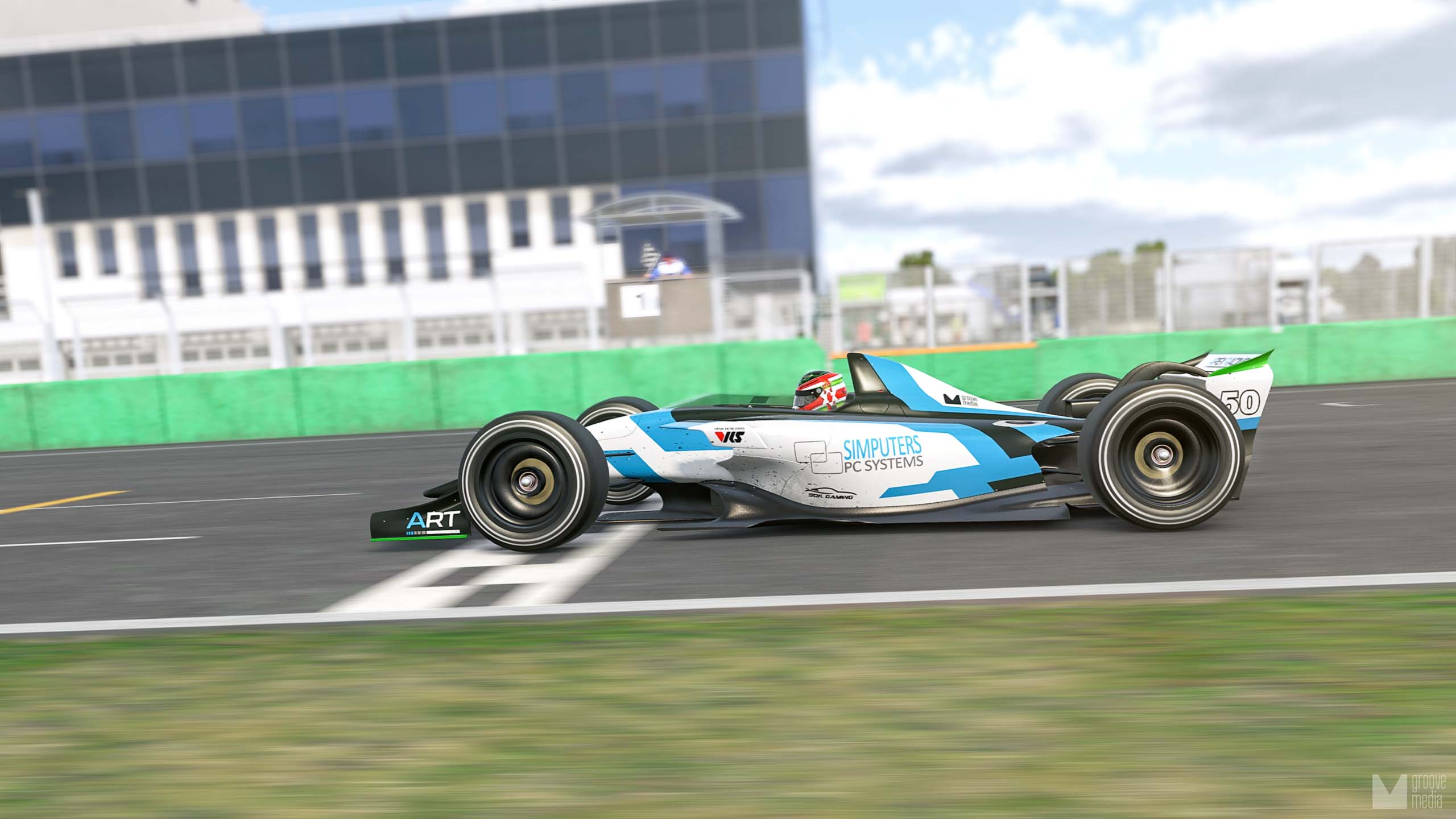 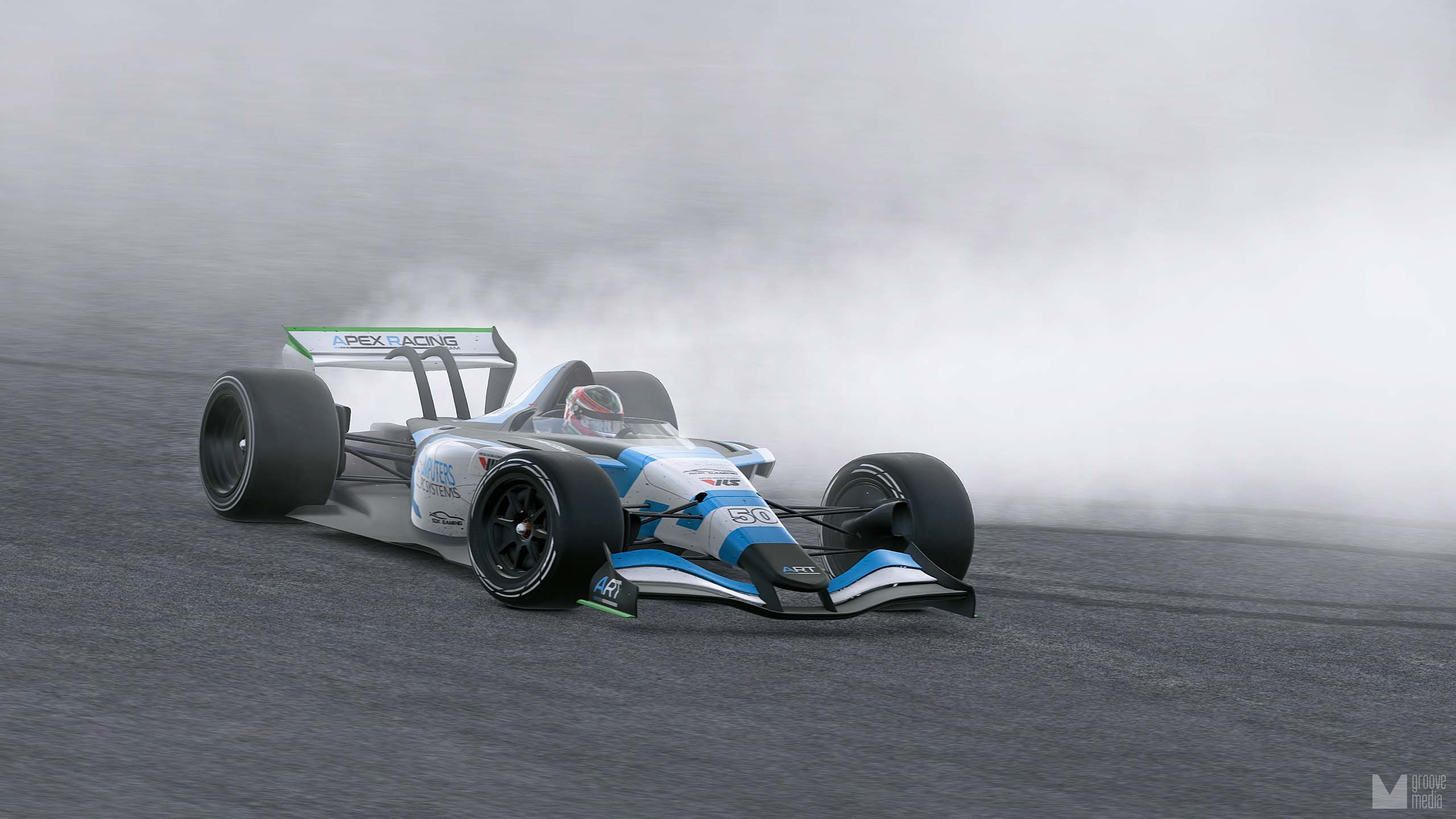 Or was he? 17 laps to go and lapped traffic to deal with, it wasn’t all over quite yet. The tension was almost unbearable, all it would take was a lapped car to misjudge an overtake and it would all change again.

It didn’t. Peter held his nerve, Yohann shadowing his every move, as Maarten had fought back up to P3 behind them. But it was too late.

Peter crossed the finish line to claim his 3rd win of the championship and the title of the FORCE DYNAMICS DALLARA IR01 WORLD CHAMPION.

Fist pumps followed (along with a huge exhalation as the pressure and stress finally escaped his body) and Peter even managed a smile on camera. The relief could be seen in his eyes as he secured his first ever World Championship win.

A fantastic championship fought hard against R8GEsports made this a thriller to the very end. The first iR01 World Champion. We enjoyed it. Very much.

Peter Berryman iR01 World Champion — “Taking the Race on its own, I’m really pleased. My 3rd Win of the Year at a track I really struggled to get to grips with in this car. Qualifying again for the 3rd week in a row was poor from me, putting me in 6th with all the work to do.

Getting to 5th off the start was critical for me making it Apex vs R8G at the front, from there we realized very quickly that we had much stronger pace than the cars we were fighting, but we needed to gain some track position somehow and the final strategy call was super important for this. Our pace was so good we were able to save a lot of fuel and still maintain a pace that our rivals needed to push to maintain, so we attempted an undercut, putting them under pressure with their fuel as it was on the very limit of a full tank.

This call got me to 2nd, and from there it was a 1v1 to the finish. I knew straight away in my head that I will make the pass, or at least have multiple attempts before the race ends with the pace I had. Unfortunately, on the 2nd attempt there was contact between myself and Maarten. From myself and the team, we felt it was a complete racing incident. I made the Apex comfortably and started tracking out expecting Maarten to use up all the track like normal and Maarten tried to squeeze me hard to limit the run I could get off of T1 and we meet in the middle. The contact easily could have damaged my wheel or my wing or even spun my car around, so I realize that was quite fortunate. I guess today was just my day and from there I managed the rears beautifully to the Chequered Flag for Win number 3.”

Michele Costantini —
“Strong first stint for me, felt like I had the pace to stay up there but unfortunately, coming in for my first stop, I was trying to follow Maarten in the pits and his car blocked my view of the white line on pit entry, which I crossed, causing me to have a 40s stop and hold penalty for unsafe pit entry. The strong pace I had was shown by the fact I finished 28s off the lead at the end of the race, after losing 40 in the pits. Luckily I was not needed up there and Peter managed to get the championship in the end, which I’m really happy about.
4th in the final standings isn’t too bad even though I was pushing to be in contention for the championship at the start of the season, but considering the amount of bad luck and a few mistakes on my part, I’m not too disappointed with 4th. Pushes me to improve even more for next year.”

Yohann Harth — “Final round and first pole for me. Super happy with my speed this entire week. Pole position was key at this track just so we could control the race and the gap for Pete and in the end it worked out. 2 days and 2 World Championships for the team, quite a nice way to end the year.”‘

Ben Fuller — “Firstly, massive congratulations to Peter for bringing home the championship. I think everyone agrees it was a team effort, but at the end of the day, Peter was consistently the best driver over the course of the full season, and I am so happy that he has brought the title home to ART”‘

Back To News
Images and article @Groove_Media