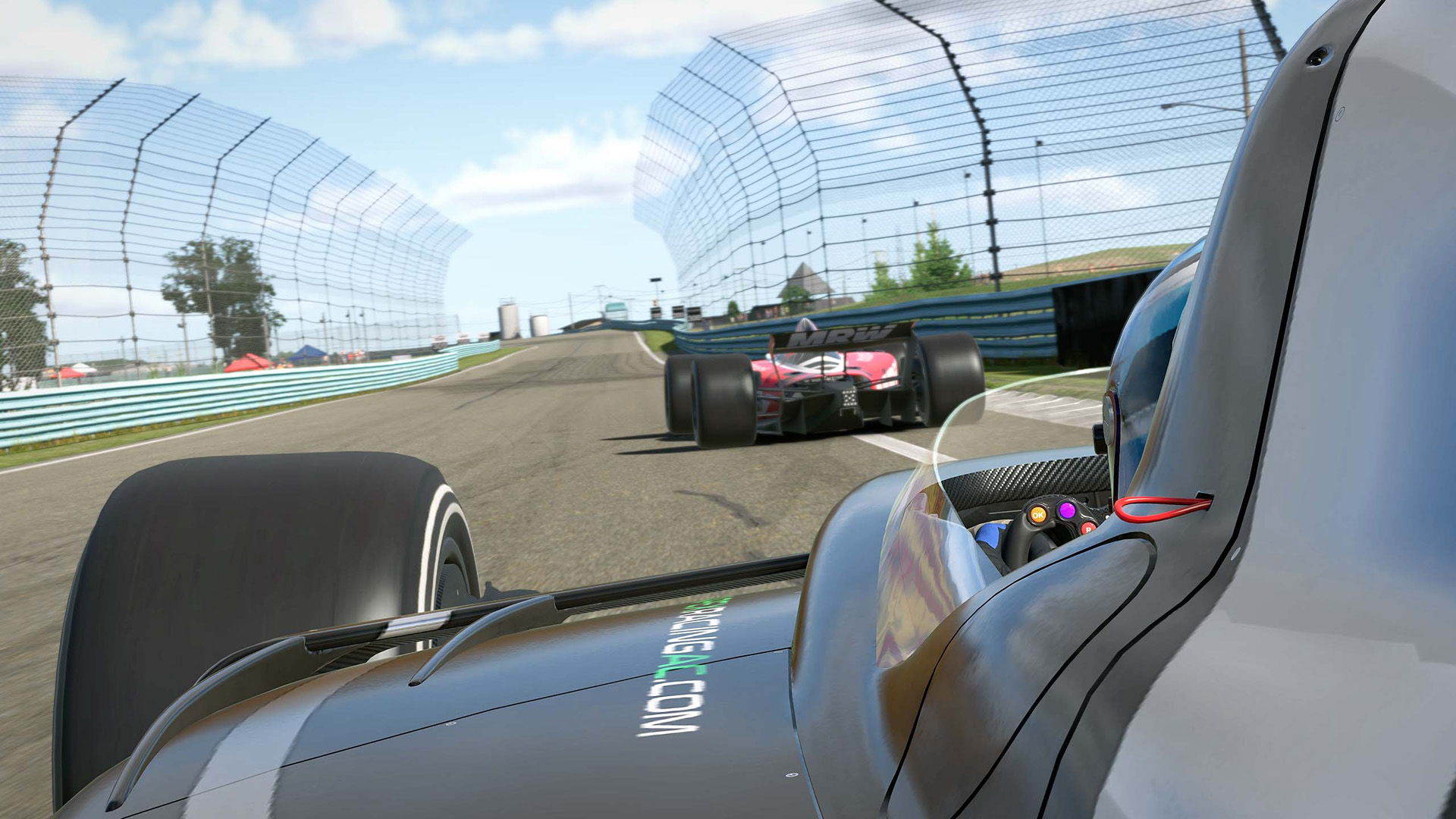 Here we go, the first round of the iRacing Dallara Grand Prix Championship starts here

The iRacing Dallara iR Grand Prix will be contested in the newest open-wheeler to arrive on the iRacing platform, the Dallara iR-01, and due to some iRacing requirements concerning number of drivers in a team, we have split the 4 drivers into 2 teams, with different liveries.

Confidence is high heading in after some really strong performances during the Qualifier series earlier in the year, with the main threats seemingly coming from R8GEsports and Team Redline.

Qualifying went well, with all 4 Apex drivers lining up in the top 5, only that pole position eluding them, those honors went to Maarten van Loozenoord for R8G this time.

As the lights turned green ( or a little before as it turned out) the screaming sounds of a field full of Dallara iR-01’s filled the iRacing broadcast. But what initially appeared to be a start to beat all starts by Ben, it soon became apparent he had, in fact, jumped the lights, leading to a pit lane penalty that would undo all of his hard work in qualifying to secure a front-row grid spot. Dropping all the way back to P25, and a full 20 seconds off the leaders, this had not gone well and points were looking unobtainable. 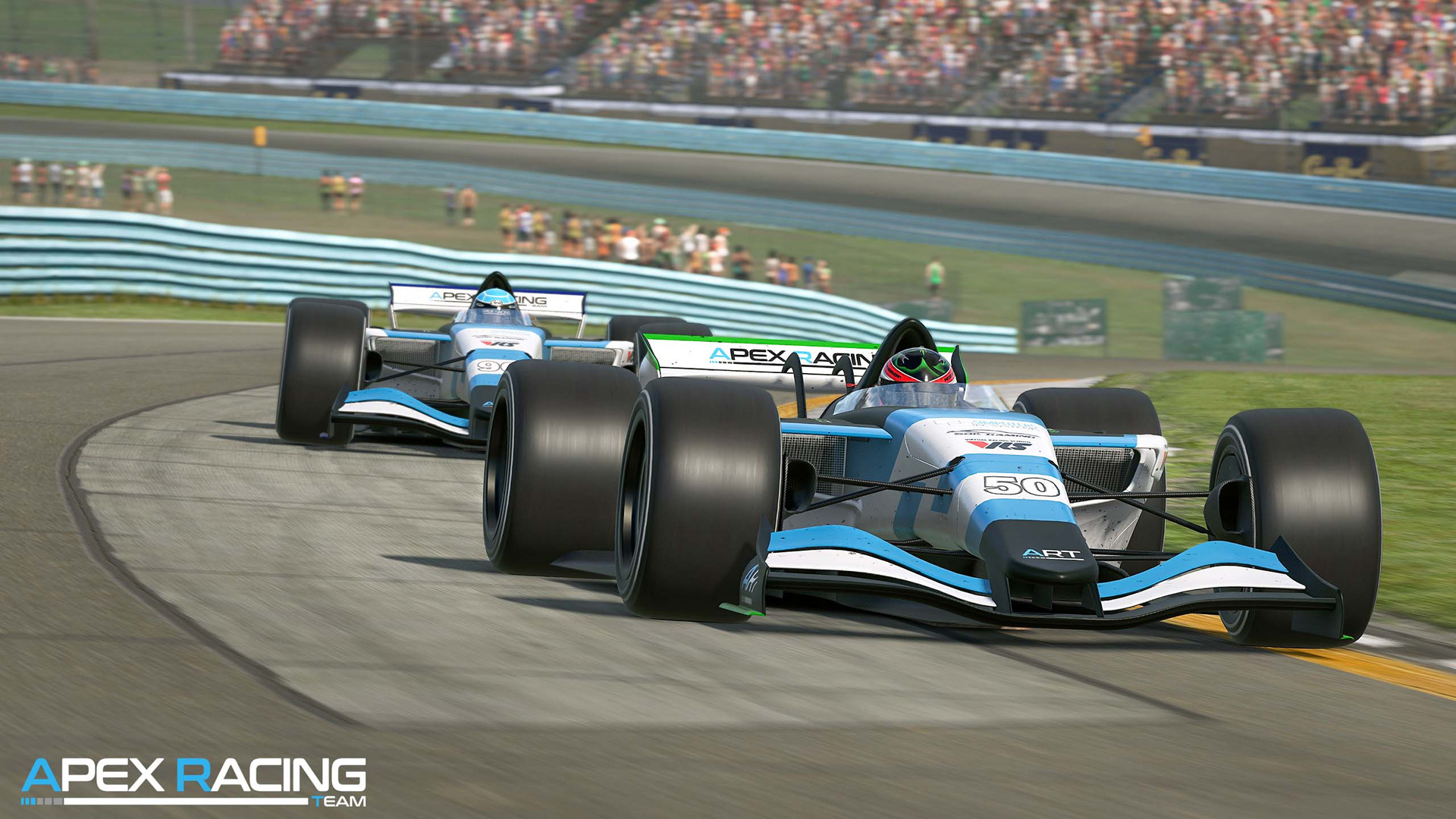 The rest of the race played out pretty much as expected, with Peter, Yohann, and Michele battling it the front with the Team Redline and R8G esports machines. A game of cat and mouse ensued as the lead changed place many times, with fuel-saving and being in the draft the preferable place to be during the middle stints of the race. It wasn’t until the second round of pitstops that things took another turn for the worse for the Apex drivers.

Michele was caught speeding in the pits and handed a drive-through penalty whilst pitting from P2 which put an end to his charge with the leaders, who by this time had dropped the Redline car so it became Peter and Yohann vs Maarten van Loozenoord and Valentin Mandernach for R8G, all the way to the end. 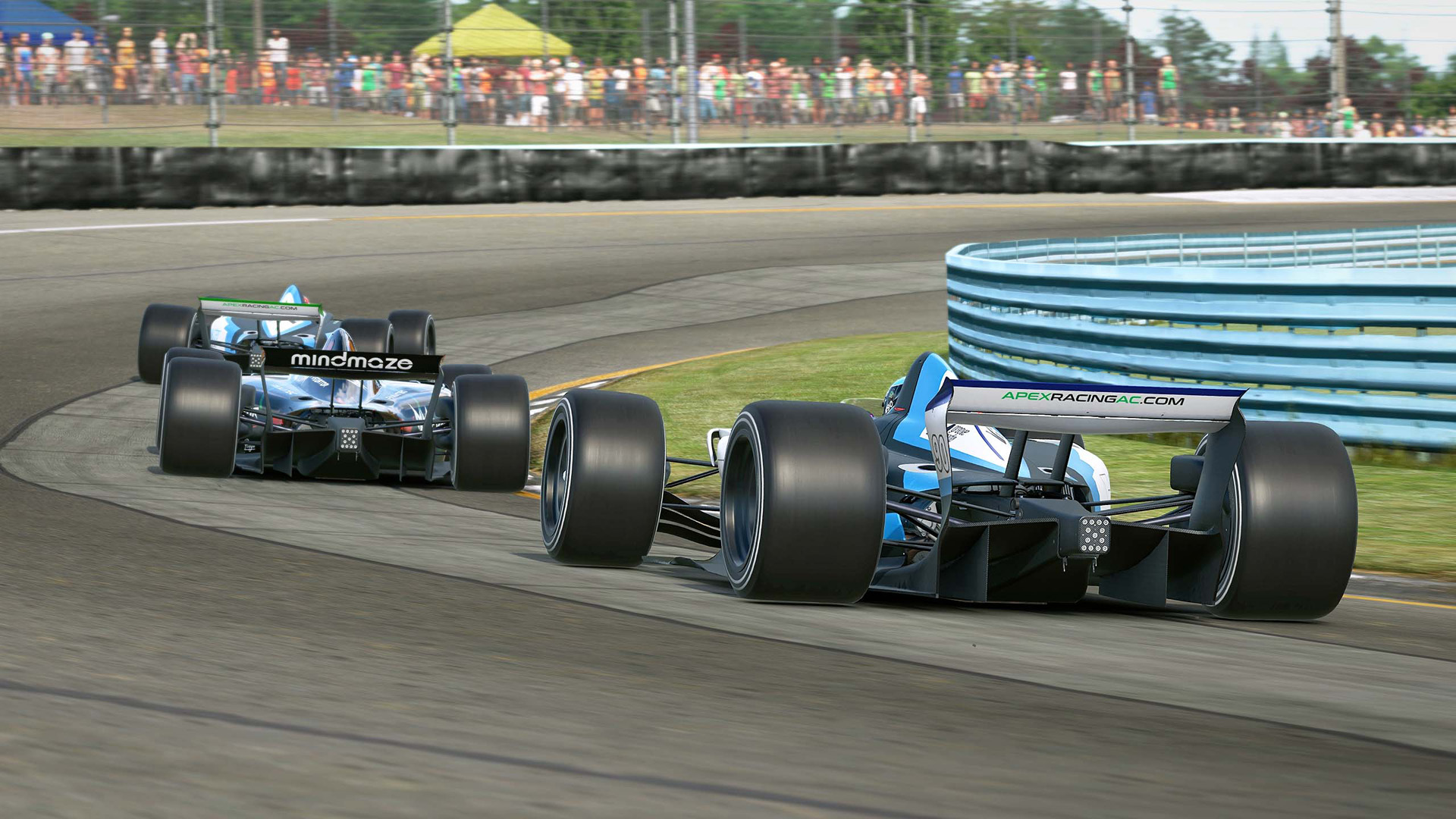 With 3 laps to go, it was looking good for the Apex team, Peter Berryman leading from Yohann Harth, Van Loozernoord was right there though, hanging off the back of Yohann’s Dallara. Had he timed this to perfection, or were the Blue and White cars going to hold on to take victory in the first round?

Halfway through the penultimate lap Van Loozernoord made his move on Yohann around the outside, just keeping the Dallara in check, and up to second place.

As the final lap ticked over, Peter was just not far enough ahead to break the super-strong draft effect, and as they crested the hill down the back straight it was clear the R8G esports car had the run, and there was nothing Peter could do to defend it. With half a lap to go until the flag, Van Loozenoord out dragged Peter and into P1. 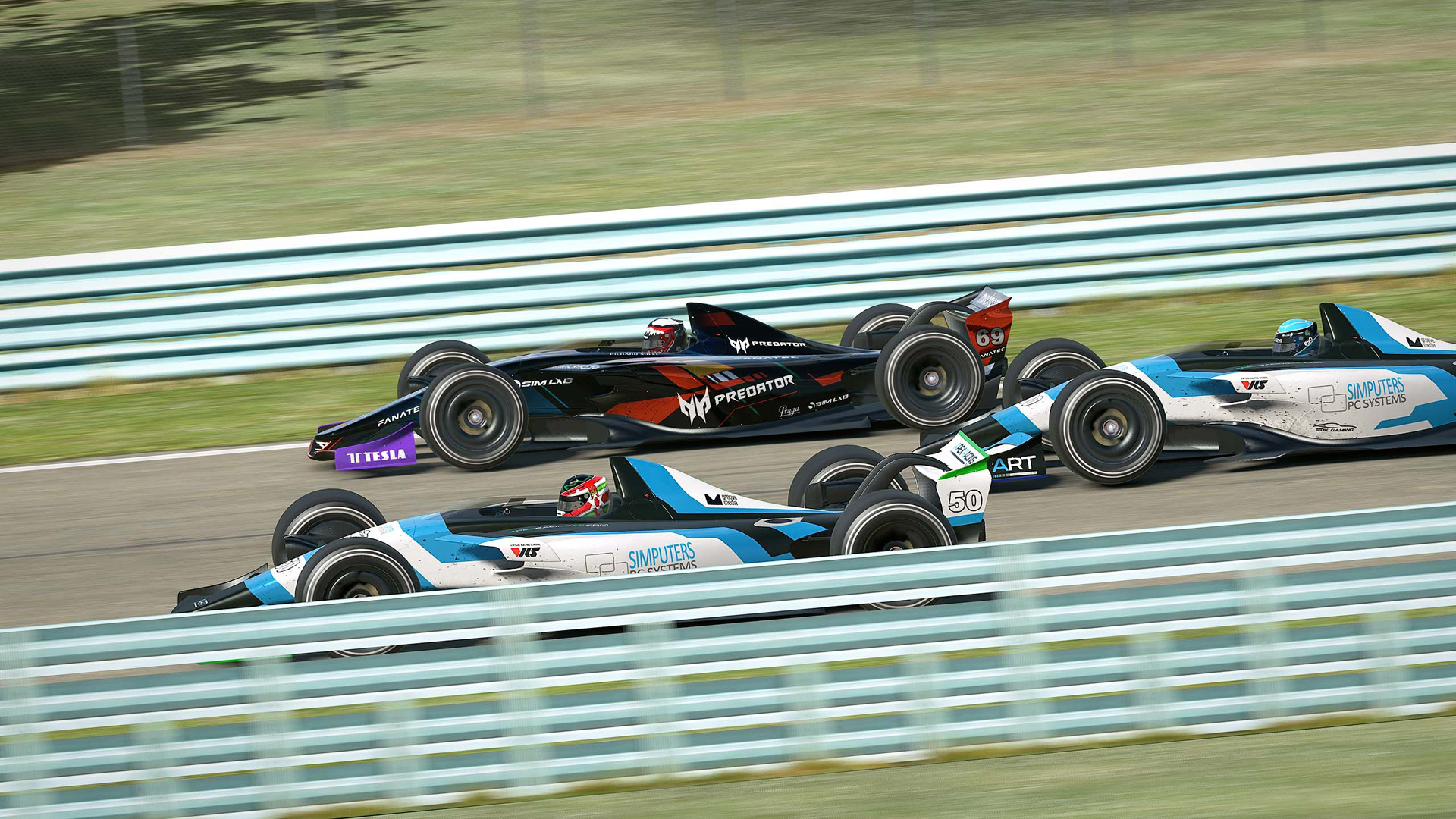 And that was how we finished, Peter in P2, and Yohan in P3, both Podium finishes, but it felt like a loss to lose the win on the last lap, despite a great haul of points.

Ben had put on an amazing recovery drive getting back to P10 from his jump-start penalty, salvaging 6 points from the day’s racing.

Michele brought it home in 16th after his penalty, but with 3 laps to go decided the point for the fastest lap was worth a shot, there was nothing to lose. He pitted, put on a fresh set of soft tyres, and duly grabbed the fastest lap. That point may be so important later in the season, a nice way to take something from the race in its last laps.

Pace was strong despite a couple of unforced errors, so after the dust had settled on the first round of the Force Dynamics Dallara iR Grand Prix Championship the realization that we will be fighting for the title lifted spirits.

Spa next, and a favourite for most of the team. Let’s see what we can do there.

” If somebody had offered me 2nd before the event I would have taken it so overall not too bad. Obviously a little disappointing to lose the win on the final lap but I feel like I did the best I could have done with all things within my control. Just unfortunate the slipstream is so strong and the gap going into the last lap made me a sitting duck which allowed Maarten to build a huge run on me. The same thing will happen to others throughout the season so just got to make sure I’m in the best spot when the opportunity arrives. Plenty of positives to take into Spa next week.“

“A bit disappointed to not get that first win with Peter on the last lap but it’s still a decent start to the season for the both of us. A bit unfortunate for Ben and Michele but we’ve all shown speed this week, it’s promising for the rest of the championship”

“Many positives to take away from the first round, but ultimately the final result is what counts for the championship and that’s nowhere near what I was aiming for. The first two stints were flawless for me and by the end of the second stint, I was in a clear position to be fighting for the win and support Yohann and Peter upfront. Unfortunately, my pit speed limit button is quite soft on my wheel, and when I came in for my scheduled stop I must’ve either pressed the button twice or it didn’t press at all, which meant my limiter didn’t come on and I sped on pit entry, forcing me to have a 40 seconds stop-hold penalty. Either way, for that one thing, I was out of the points. So I’ve decided to come in with 3 to go for a set of soft tires and went for the fastest lap, which is worth one point, which I managed to get. The positives are that we showed great pace as a team and we were all capable of fighting upfront and doing so in a smart manner. The championship is long and this is just the start of it. Hoping for the same performance, but a better result in the next races..”

“”Really tough pill to swallow. Qualifying was disappointing with the amount of time left on the table from mistakes, but lining up P2 on the grid was an amazing surprise, effectively strapped into the hot seat to take control of the race up to the carousel. An issue with my brake setup caused a disconnection on the input, resulting in the car leaving the grid box before the green light, immediately resulting in a stop-and-go penalty. Losing 22 seconds, I was determined to just recover as many points as possible, without any real idea what finishing position I could realistically attain. I was happy with the pace I moved through the field but had many minor mistakes that must be corrected. I am happy with the recovery to finish p10, realistically p8 was the best position on the table with a perfect drive after the start-line issue, so while there are some positives to take away, many negatives will be assessed and corrected heading to Spa.”” 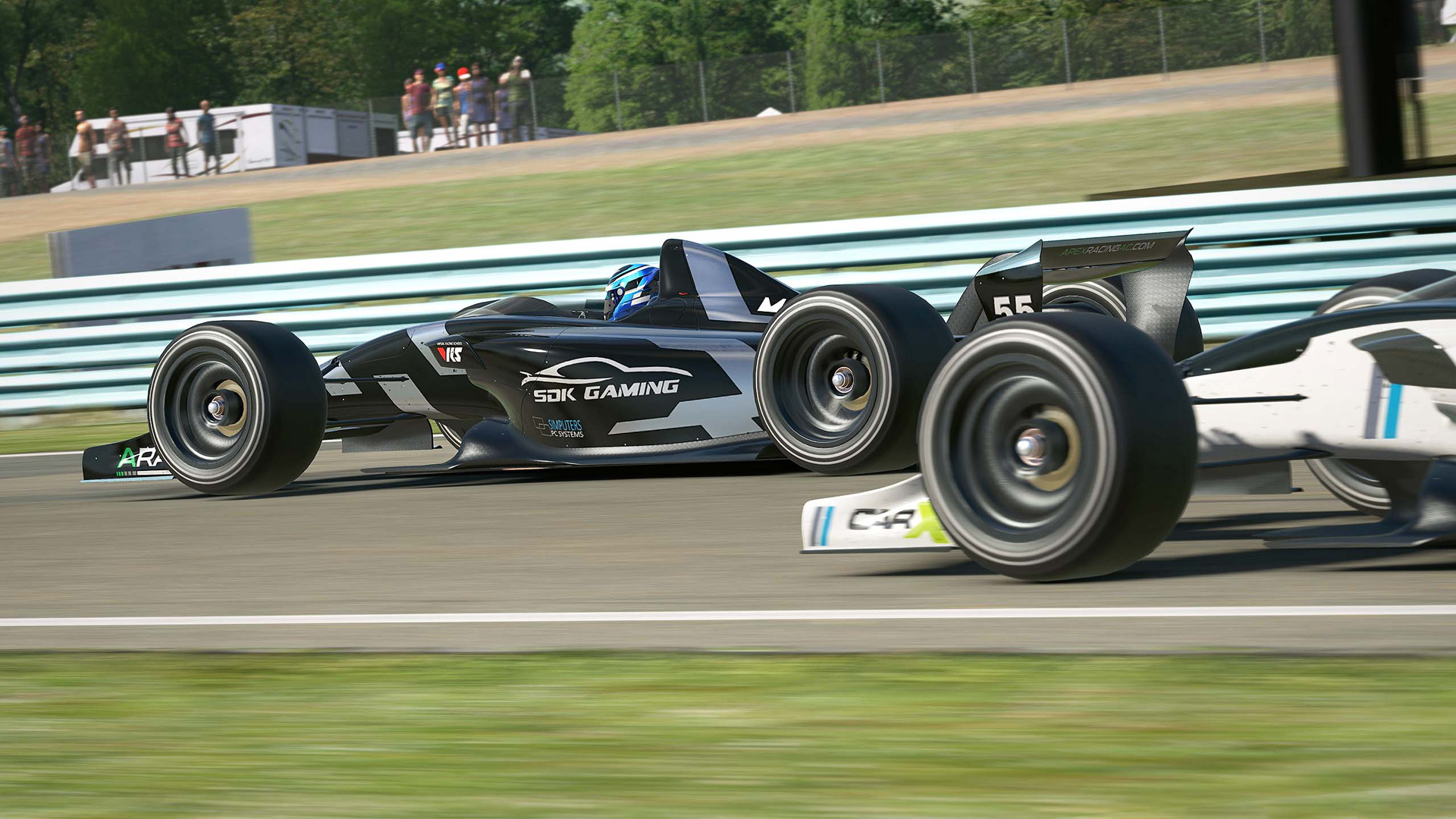