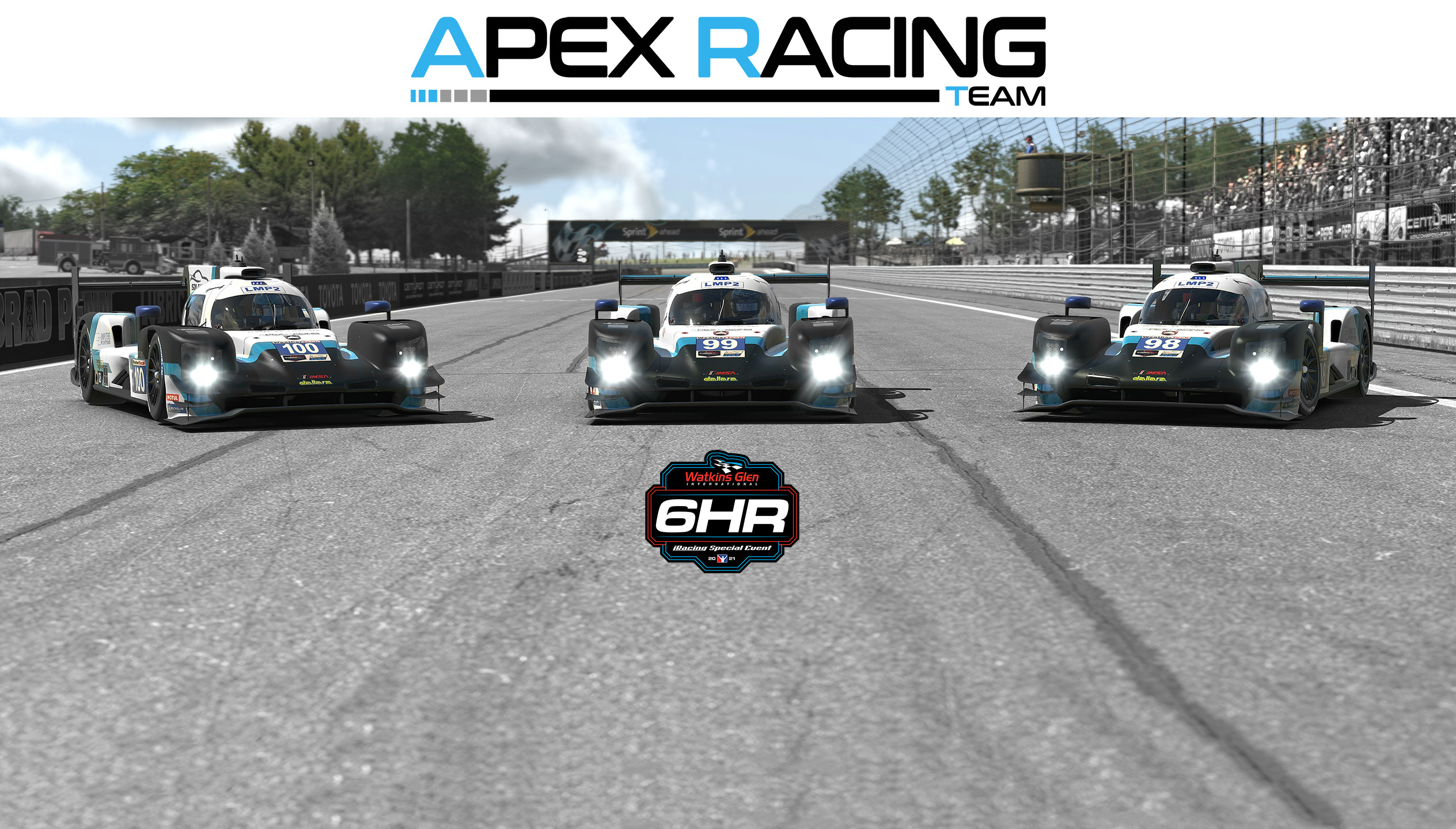 Apex Racing Team climb the podium at ‘The Glen’

When an ambitious Cameron Argetsinger organised the first race at Watkins Glen in 1948, little did this law student know what he’d laid the foundations for. This iconic New York venue would go on to host Formula 1, NASCAR, Indy Car and the peak of endurance racing. Today, many of these series continued to race on the wonderfully fast curves of ‘The Glen’.

In the unofficial endurance racing grand slam, wins at Le Mans, Sebring, Spa, Nurburgring, Bathurst and Daytona would not be enough to complete the full set. Since 1968, a win at the 6 hours of ‘The Glen’ remains vital to the C.V of any truly great endurance racer.

America’s greatest long-distance racer, Hurley Haywood, began his career with a debut win at Watkins Glen in 1969. Forty-eight starts later, the Illinois ace had eight wins to his name, cementing his status in endurance racing folklore. 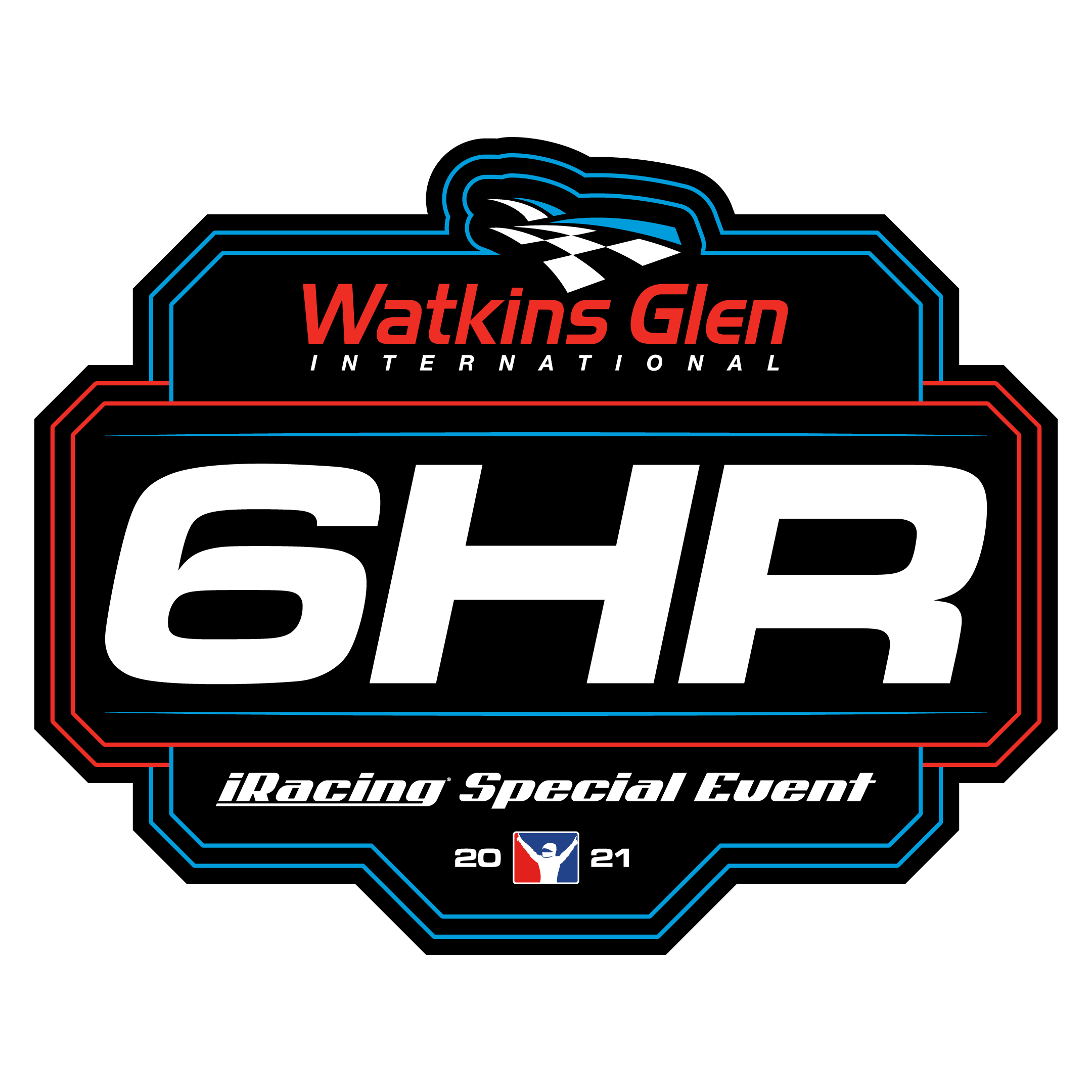 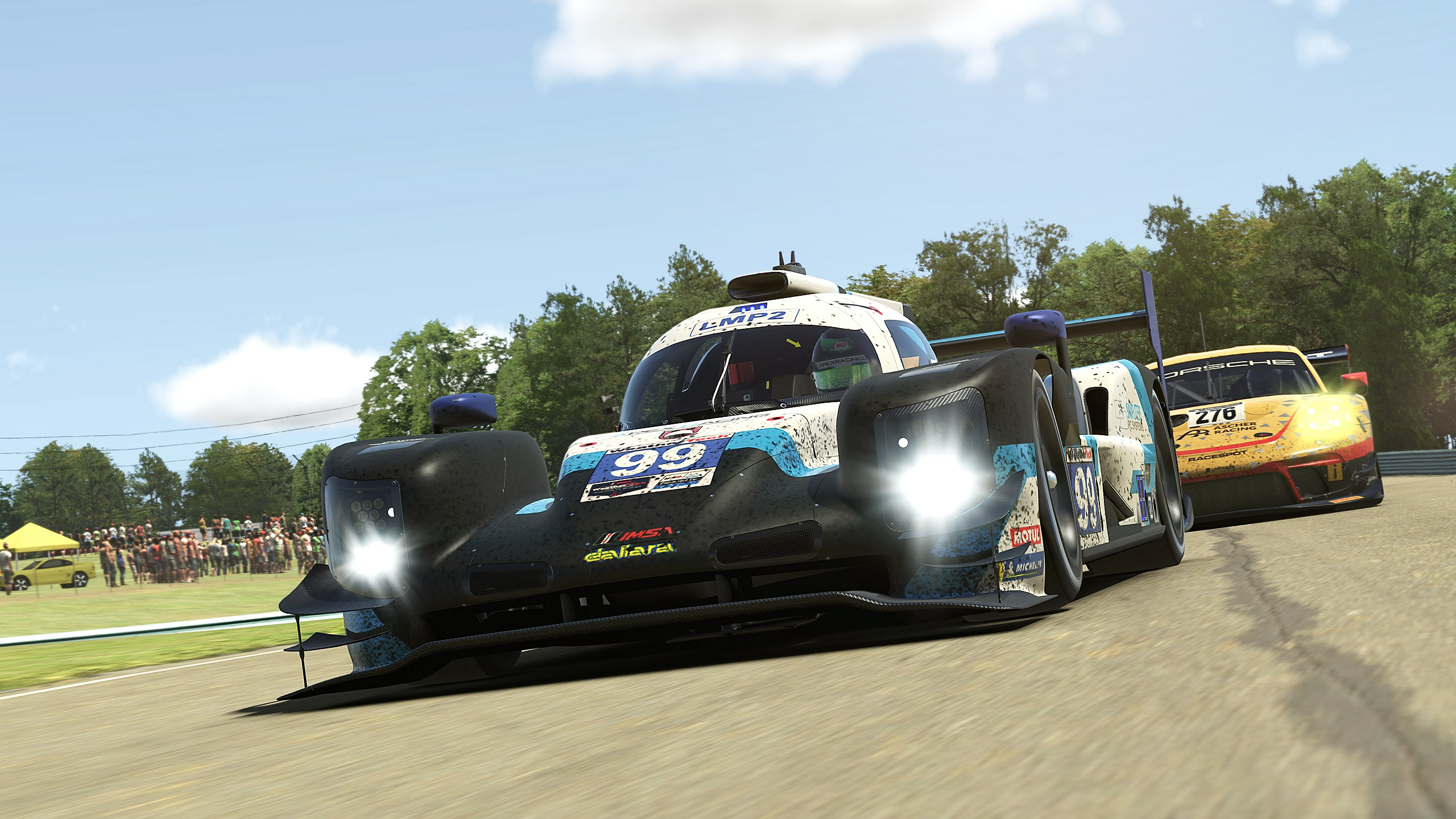 Missing out on pole by four tenths of a second, Berryman and Harth locked out the third row of the grid for the start of the six-hour enduro. A pair of Team Redline machines occupied row two, while R8G esports started at the front. 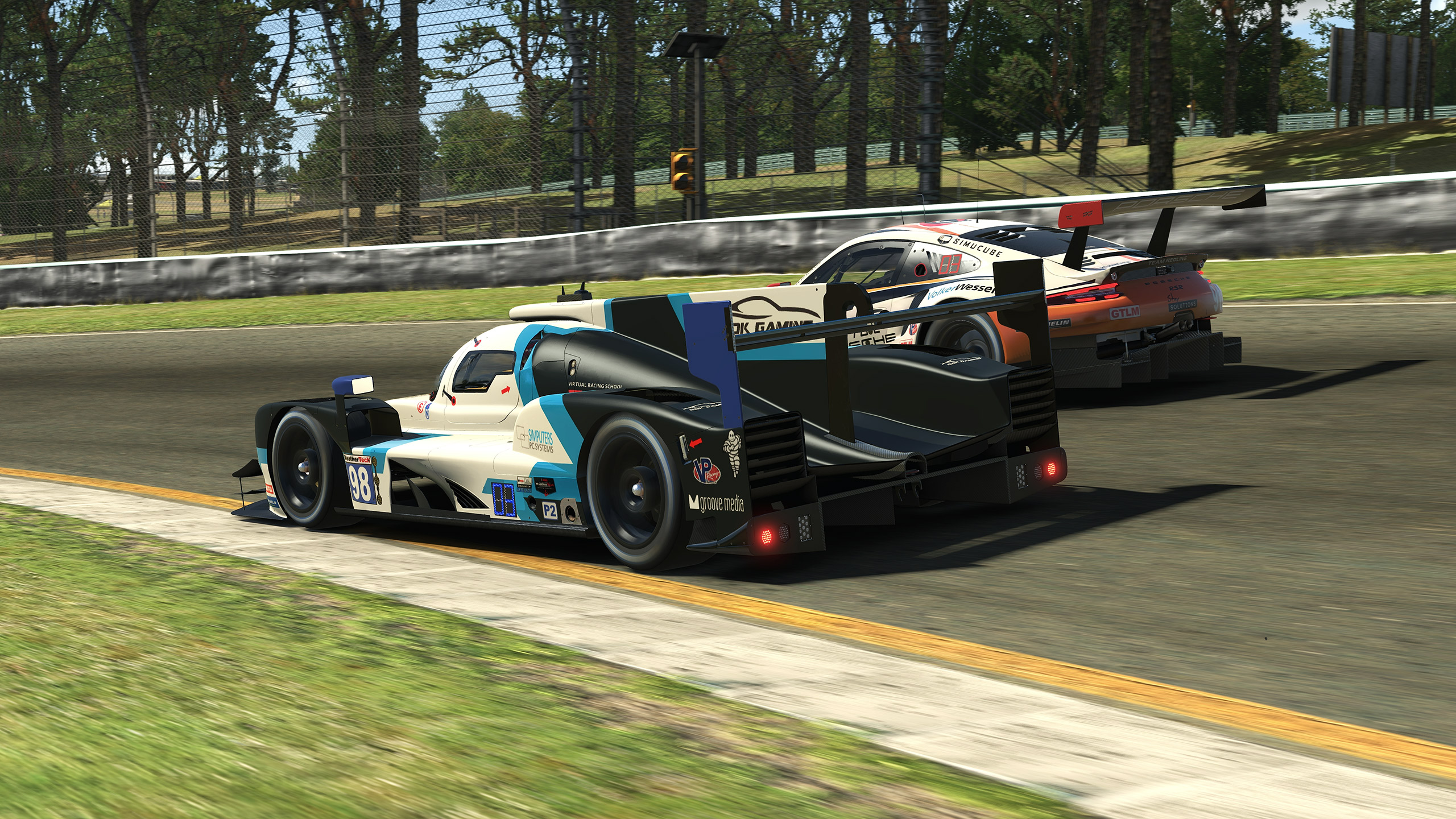 At the pinnacle of modern endurance racing, the days of running well within the limit are now a distant memory. Only a flawless and flat out run from flag to flag will do. Despite qualifying well, the Apex Racing Team Dallaras struggled all day long with traffic in this demanding multiclass race. Furthermore, those with sister cars in GT classes will naturally be given a clearer path by their stablemates too.

Nevertheless, the #99 machine of Harth and Fluke forged through the pack in the opening stints. By the ninety-minute mark, the #99 crew had the leading Team Redline car well within their sights. By the halfway point, both Apex Racing Team cars were onto the podium. 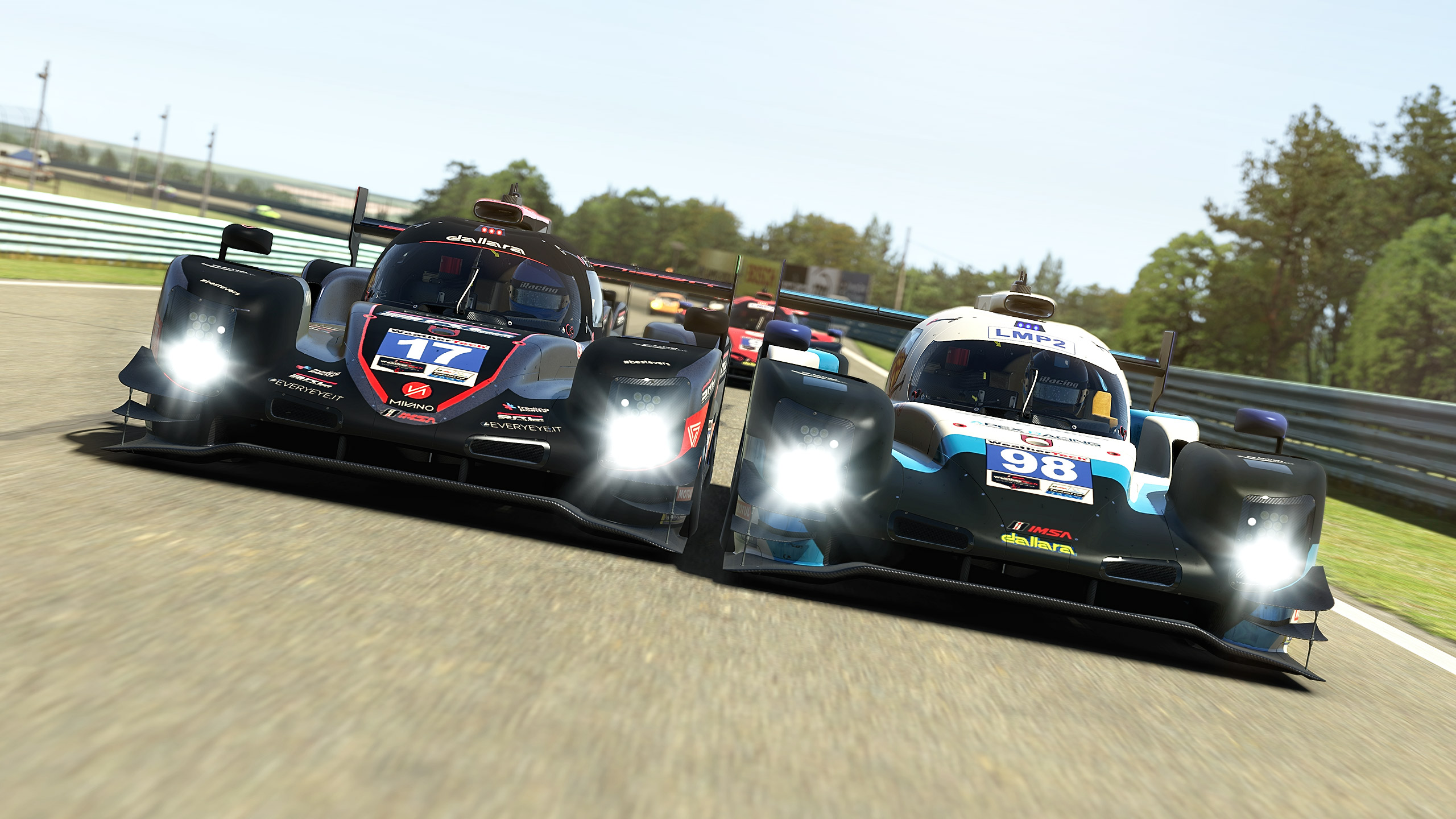 Despite intense pressure from both ART crews, the #1 Team Redline Purple squad couldn’t be broken and took home a well-earned win by just nine seconds over the #99 ART machine. Nevertheless, a 100% podium success rate marks a job well done for all the Apex Racing Team squad.

After the six-hour sprint, the stars of the Apex Racing Team Dallaras gave their thoughts on a hard-fought race:

“After Sebring I was looking forward to finally driving this car in a race for the first time. Unfortunately, a few cars in qualifying used the brake dragging exploit. This shuffled us back a few spots more than we should have been, which ultimately decided our race.

Track position is everything in the first 1-2 stints and we got the short end of the stick. That trend held the whole way through the race as we seemed to always get the worst of the traffic compared to the front two which led for an extremely frustrating race for us.

I feel we had the quickest car, it’s just a shame with multiclass racing being the way it is, luck of the draw through traffic held us back from showing it.

Overall, I’m pretty happy with 2nd and 3rd for the team, given the huge inexperience our guys have in this car compared to our competition. However, I can’t help but feel frustrated with how everything played out to not get the win.”

“To get 2nd in a race like this in a prototype that I haven’t really raced competitively before is a pretty strong result but to miss out by less than 10 seconds in the end is a little bit gutting. I think we had good pace and I also think our strategy call was the right idea, but we just never quite had track position to make it count at the key moments of the race. The one mistake with the strategy was putting a lap too much fuel when we did commit to the extra stop, and we ended up directly behind the leaders rather than ahead, ultimately meaning we couldn’t utilise the extra pace in the car for that stint and leaving us on the back foot. Had we got 5 seconds further up the road come the end of the last pit cycle I think I could have held on to win but ultimately it wasn’t to be. We didn’t do much wrong, just got to give credit to Redline to sticking to the strategy and executing it well. Massive thanks to Yohann for his efforts and to the whole team in working on the car and preparing for the race, we fell just a touch short.”

“We almost got it. I don’t think we could have done anything different, we just lacked some luck when needed, the car felt good, the pace was there, but an out lap on fresh tires in traffic killed our chances I think, had we exited the pits ahead of that lapped LMP2 car, I’m pretty sure we would have been ahead of the Redline Purple car and it would have been a much different story. We’ll get them next time. Super happy with the big team effort preparing for this race, it’s not easy to jump from one car to another mid week for two big events, but the guys did it.” 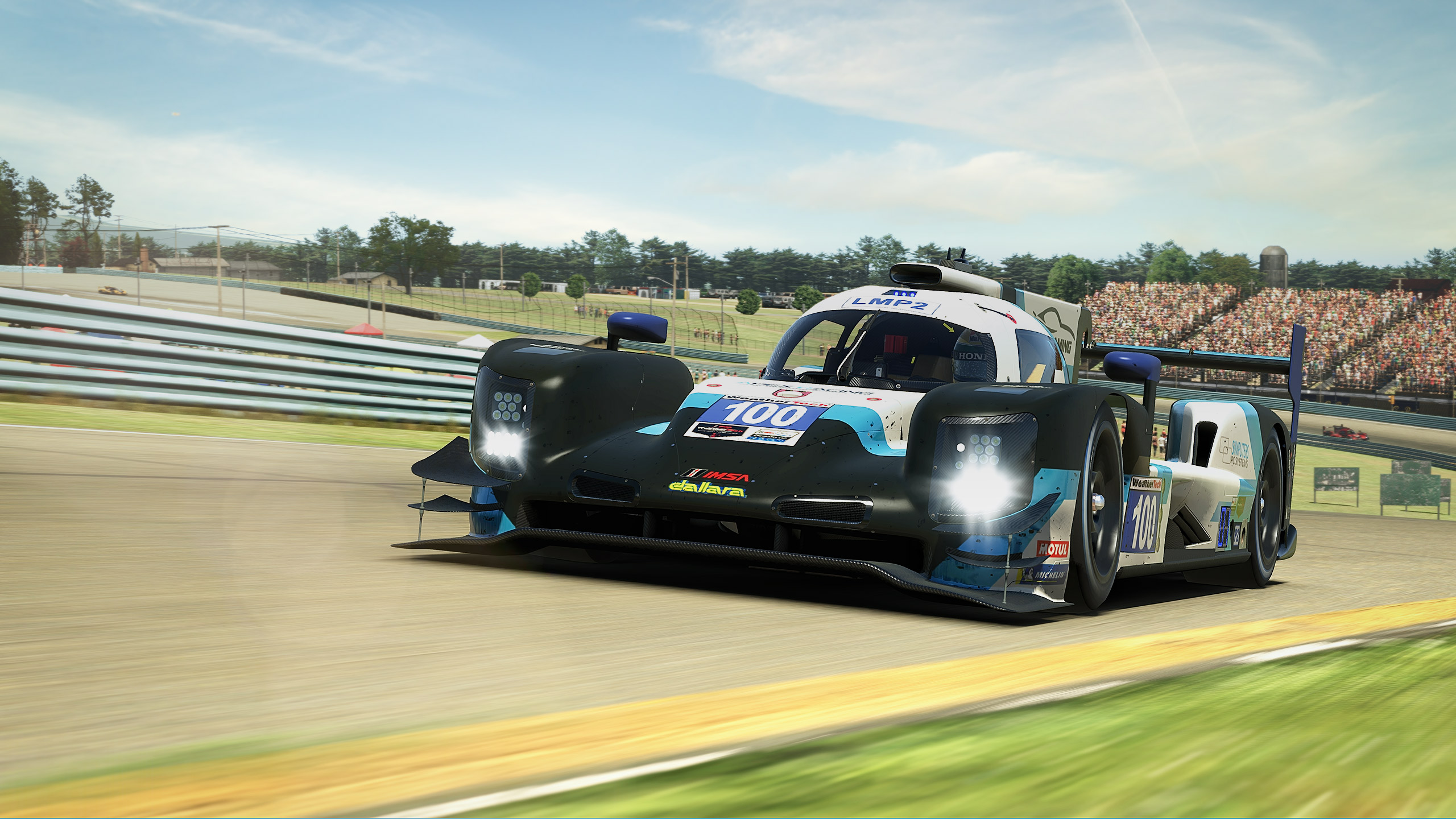