By Peter MacKaySeptember 28, 2020No Comments

Apex Racing Team trio Jake Robertson, Yohann Harth and Jon Robertson arrived in Hell for the opening round of the iRacing Rallycross World Championship. Based thirty minutes from the Trondheim Fjord in Norway, Hell is one of the world’s best-known rallycross facilities. Despite its slightly unfortunate name, the track is in fact heaven for dirt racing fanatics.

Hell, Lankebanen always proves popular with drivers and fans alike when hosting the World Rallycross Championship. This undulating Scandinavian circuit provides the ideal venue for the opening round of this ambitious new iRacing rallycross series.

Popularity of Rallycross has fluctuated over the years but appears to be on the rise once again. A recent World Rally Cross Esports event attracted a staggering 1.24 million viewers. Rallycross’ quick-fire heat racing and spectacular turbocharged machines guarantee a breath-taking spectacle. 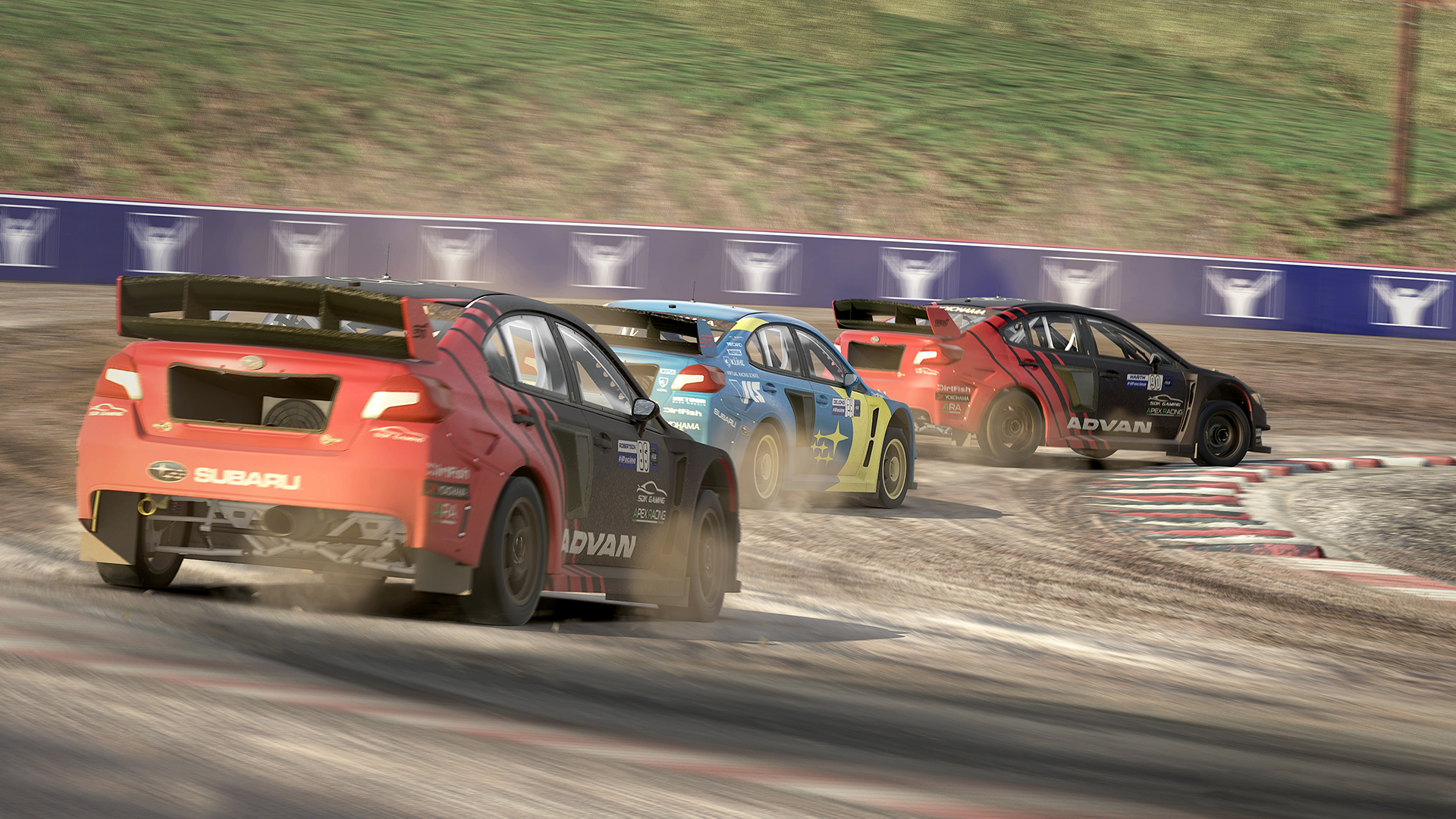 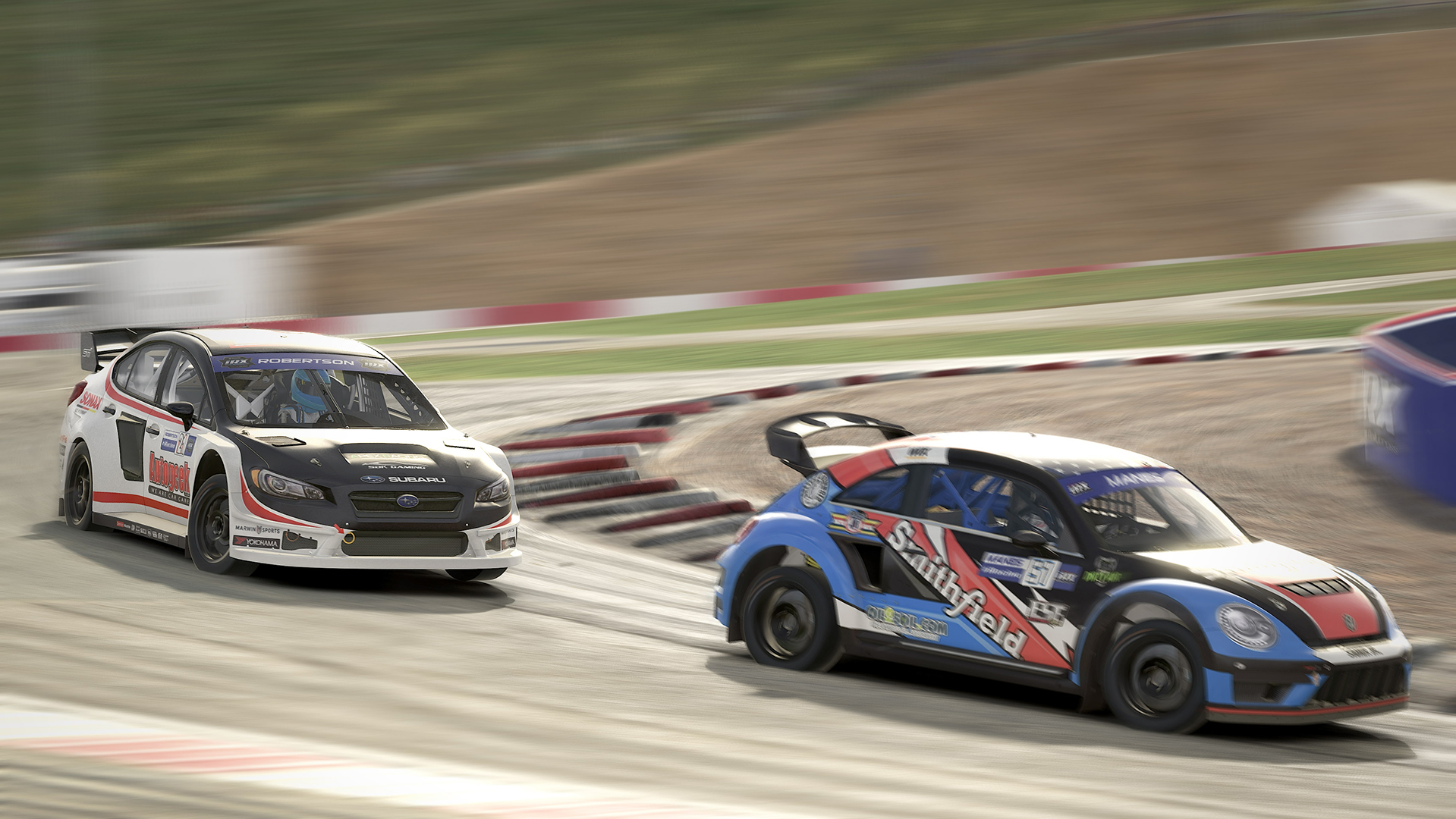 First up for Apex Racing Team, was Yohann Harth. Starting on the front row of his heat, Harth began in prime position to pinch a crucial spot in the feature. Muscling his way through the pack, Harth held the lead for most of the heat in his Advan tyre liveried Subaru. Garrett Lowe hassled Harth all the way to the flag but the ART ace refused to flinch. Williams Esports superstar Otto Taskinen leapfrogged Harth on the final lap as the Frenchman took the compulsory joker. However, it was job done. A vital spot in the feature race, booked. Additionally, the result toasted a perfect start to a new relationship between Apex Racing Team and the Yokohama rubber company.

Jon Robertson started his heat on pole position.  As the field of Subaru’s and VW Beetle’s catapulted to sixty miles per hour in under two seconds, Robertson got the hole shot in his Advan Subaru. A few drivers bundled into the joker lane, but Robertson pressed on at the front of the field.  Robertson was on imperious form and sped away to a comfortable win. Two heats down, two ART Advan Subaru’s in the feature race.

Finally, it was ART’s young gun, Jake Robertson. 15-year-old Robertson lined up on pole position in the Ed Carpenter Racing Subaru, for the final heat. Despite a swift launch into the lead, a desperate lunge from Andretti Autosport’s new signing, Beau Albert, pushed Robertson back. Attempting to capitalise on Robertson’s loss of momentum, Sindre Silva moved alongside in his Nitro Circus Subaru. Contact between Robertson and Silva resulted in both drivers shooting off the circuit and out of contention for an automatic promotion to the feature race.

So, to the consolation race. Jake Robertson’s final opportunity to book a ticket to the critical feature race. A grid of nine cars and only one spot for the feature provided a potent cocktail for explosive action. From fourth on the grid, Robertson biffed and bashed his way to second place by the third lap. However, an incident triggered by the VW Beetle of Garrett Manes, spun Ollikainen’s Subaru into the path of the innocent Robertson. Despite being the instigator of the melee, Manes was the only driver to survive the pile up. 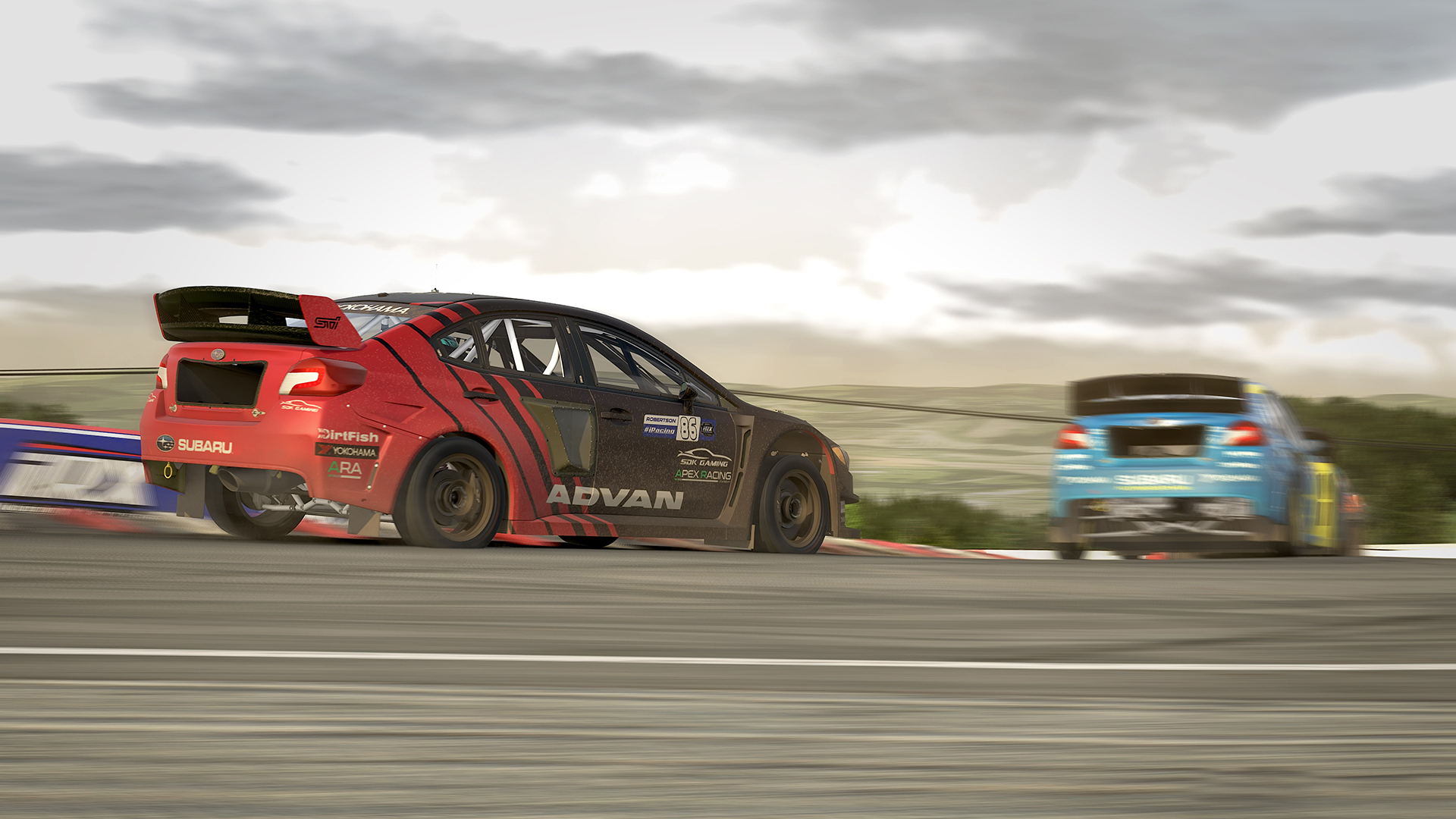 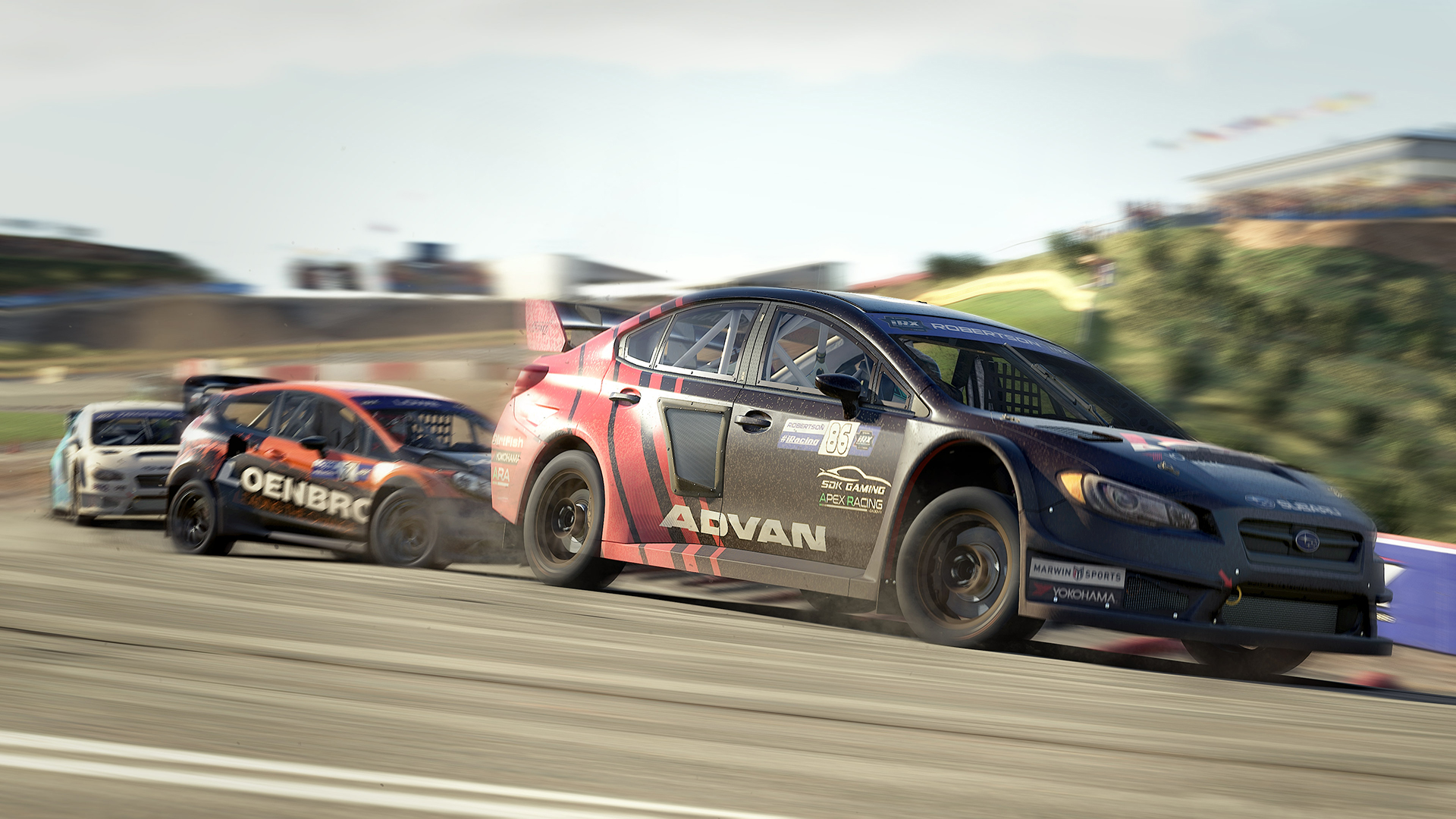 Jon Robertson and Yohann Harth lined up for the feature race in their menacing red and black Advan Subaru’s in third and sixth places, respectively. By virtue of their excellent heat race performances, Robertson and Harth joined the world’s best Esports stars on the dirt. Jon Robertson launched his boxer engine beast perfectly off the line and immediately dived for the compulsory joker. Harth, played a different hand, delaying his joker lane trip.

On lap three, Jon Robertson rendezvoused with Subaru Motorsports USA ace, Mitchell de Jong. With both drivers having completed the joker, Robertson joined the fight for the win. Robertson never left the shadow of de Jong but couldn’t quite make a pass. Nevertheless, a third-place finish was a dream start to the iRacing Rallycross World Championship for Robertson. Yohann Harth fell victim to the draconian iRacing stewards. A tiny step over track limits gave the Frenchman a ‘slow down’ penalty. In the frantic sprinting world of Rallycross, such a penalty is impossible to recover from. Yet, Harth still finished sixth and bagged strong points for the championship.

Following the race, Apex Racing Team’s stars gave their thoughts on the opening round of the season.

Jake Robertson: “After playing catch up on pace all week, I’m very happy with my qualifying result of fourth. I managed to pull through into the lead in my heat going into turn four. However, an unfortunate incident sent me back into third, ruining my chance of going straight through to the feature. The last chance qualifier was a mess. Battling for the lead, I was put into the wall. Overall, I’m extremely happy with my pace in the event and hopefully I can get a better result next week.”

Yohann Harth: “I didn’t expect much from this round as I had limited time to practice but I can’t be happy with my drive, especially in the feature. I had a guaranteed top five with the alternate joker strategy, but I got a slowdown penalty in Turn 4 with only 3 laps to go. It’s still a decent result for the Yokohama team with both cars in the feature and Jon on the podium.”

Jon Robertson: “Very happy with the event overall. Qualifying third was a great way to start the season, although I certainly had more in me. In my heat, I managed to pull a gap early on and secured an easy win. In the feature, I started third, forcing me to joker early. So, I focused on staying out of trouble and picking up positions as others got caught up in incidents. Hopefully, I can have more results like this throughout the season to give me a shot at a decent position in the championship”

Daytona International Speedway hosts the next round of the iRacing Rallycross World Championship. Unlike Hell, the rallycross layout at “The World Center of Racing” has virtually no undulation, posing a new challenge to the Apex Racing Team crew. Tune in on the iRacing You Tube channel for live coverage on the 10th of October. 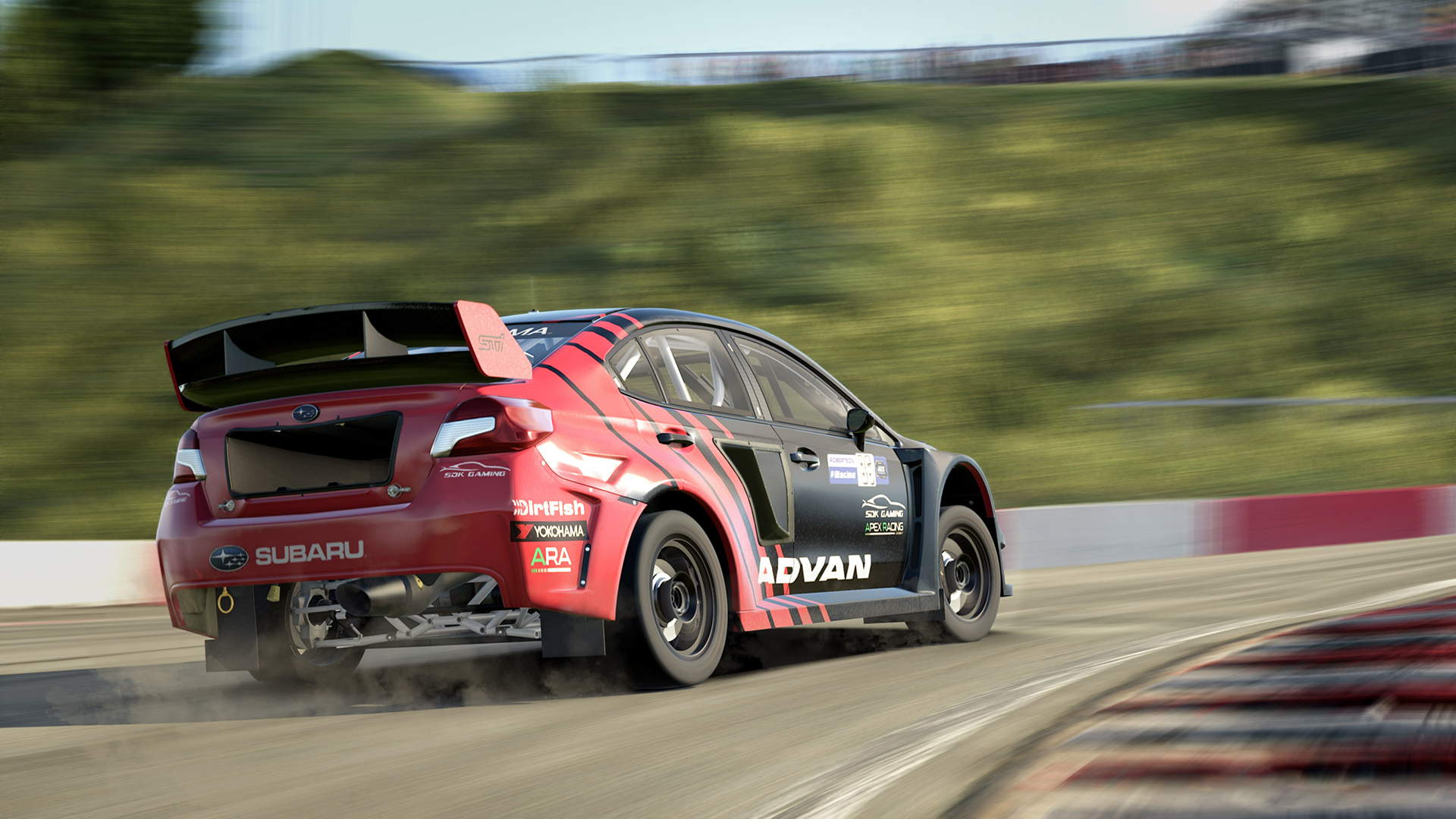