By Peter MacKaySeptember 27, 2020No Comments

Le Circuit de la Sarthe needs no introduction to race fans worldwide. Pure prototype machines blasting down the Mulsanne straight under the cover of darkness, scything through endless trains of seemingly pedestrian GT cars. This is the Le Mans 24 hours.

Prior to the ceremonial delivery of ‘Le Drapeau Tricolore’ and a booming rendition of La Marseillaise, signalling the start of the world’s greatest race, a sprint race provides an appetiser to fans.

In 2020, drivers from various Porsche Carrera Cup championships gathered at Le Mans to provide a perfect prelude to the 24-hour classic. Dutchman, Larry ten Voorde, complemented his Porsche Super Cup title with a victory prior to hopping into a GTE-AM Porsche 911 RSR for the 24-hour race.

Regarded as the pinnacle of sim racing, the Tag Heuer Porsche Esports Super Cup emulates the top level of one make Porsche racing, in the virtual world. 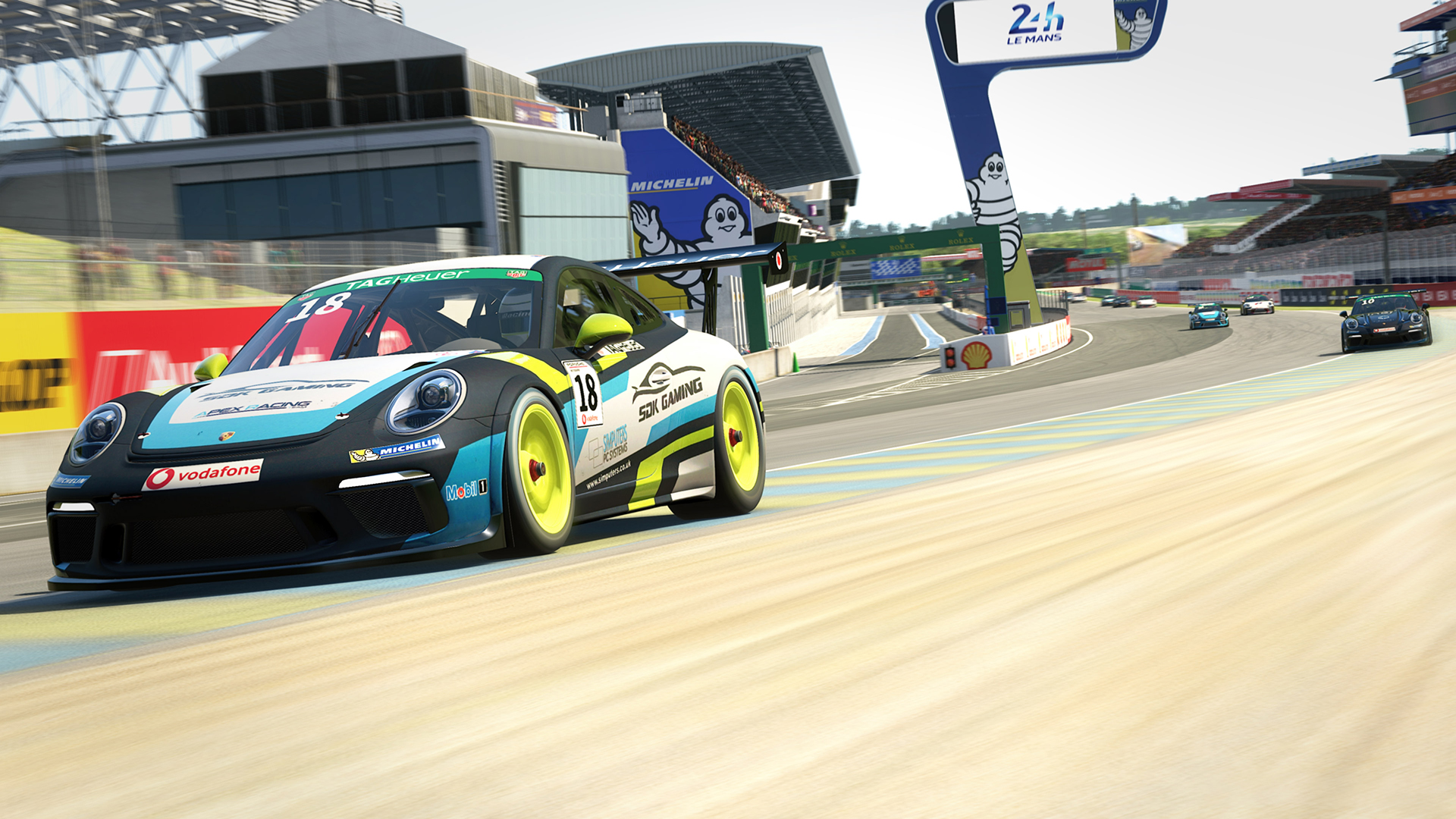 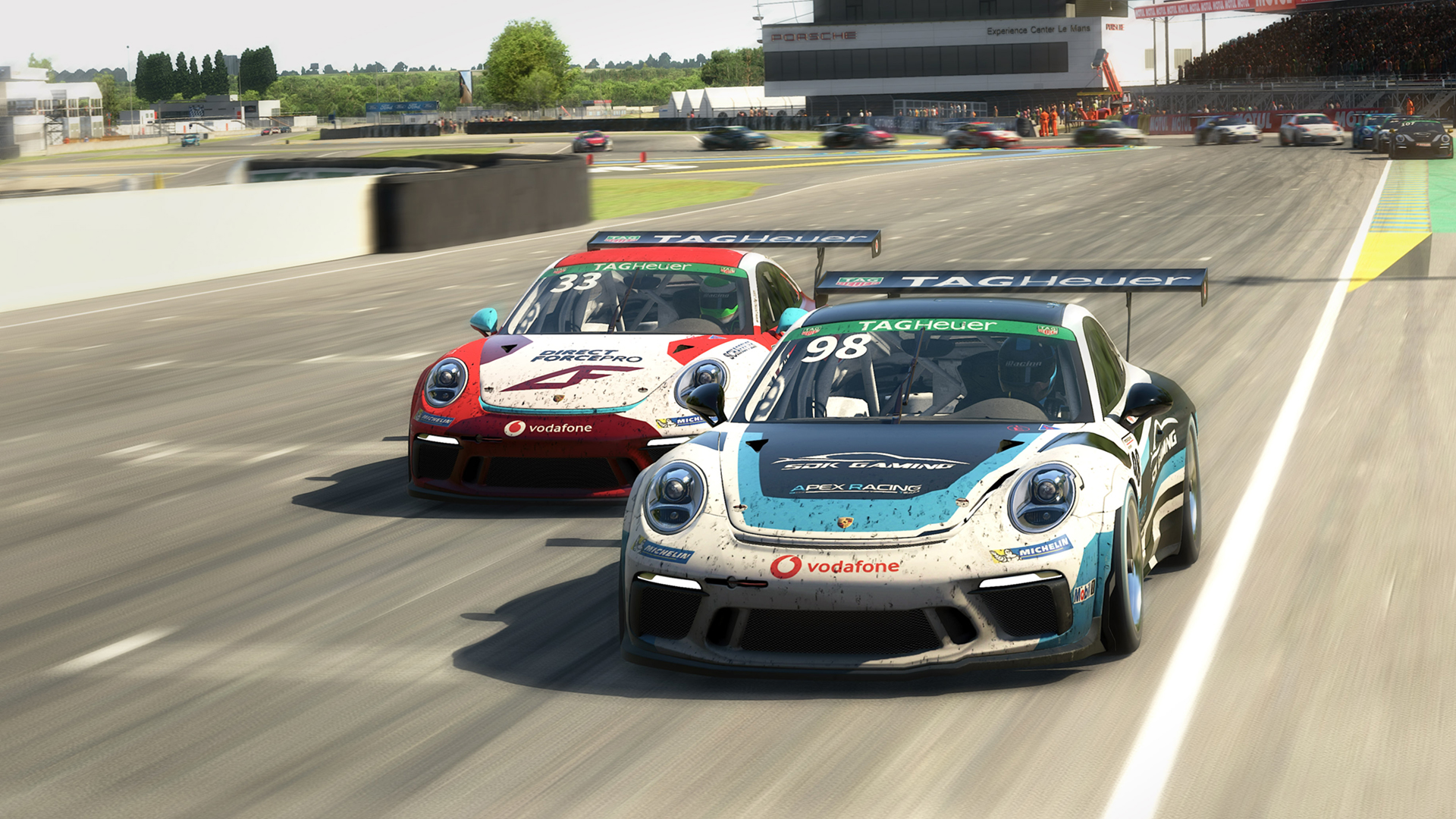 Completing a strong qualifying lap at Le Mans is notoriously challenging. Such is the length and complexity of the circuit. Not to mention strictly enforced track limits. Jamie Fluke was quickest of the ART crew. Sixth fastest would place Fluke in third place for the opening sprint race. Thirteenth and fifteenth place left Kevin Ellis Jr. and Yohann Harth disappointed. Jarrad Filsell and Antoine Higelin struggled to put their laps together and qualified twenty fifth and twenty ninth, respectively. Nevertheless, plentiful opportunity for slip streaming and moving up the field lay ahead.

Five laps and approximately twenty minutes for the opening sprint gave the ART crew little time to relax and work through the field. On the opening lap, Jamie Fluke didn’t squander his strong grid spot and established a crucial place in the leading bunch in fourth place.

At the front of the field, Jamie Fluke demonstrated exemplary race craft amongst the slinking train of Porsche’s, ripping down the Mulsanne straight. With two laps to go, the rapid Northern Irishman progressed to third place, immediately behind Mitchell De Jong and Graham Carroll. Meanwhile, Kevin Ellis Jr. and Yohann Harth dovetailed up the field together. Ellis Jr. in eleventh. Harth in twelfth. 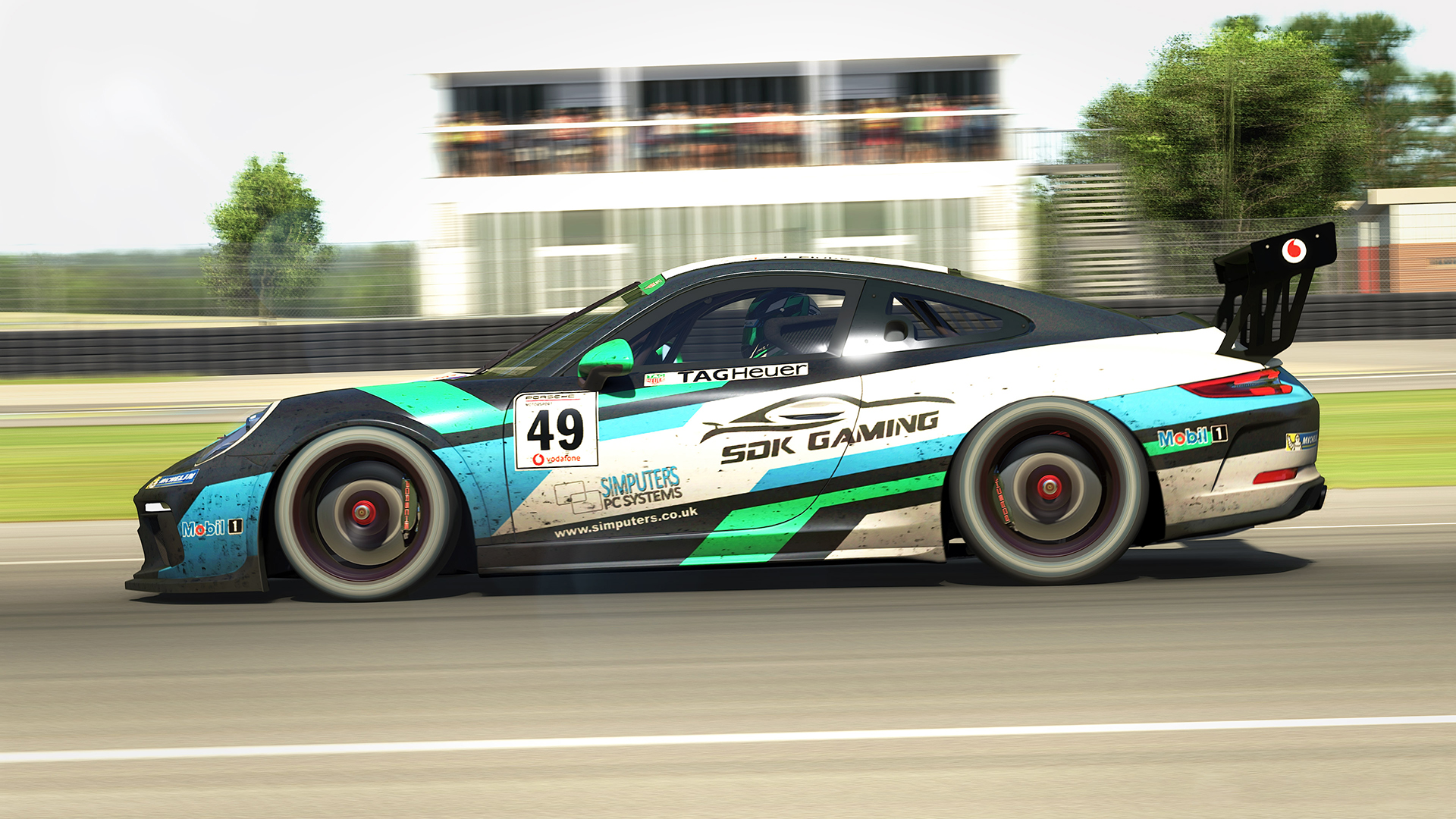 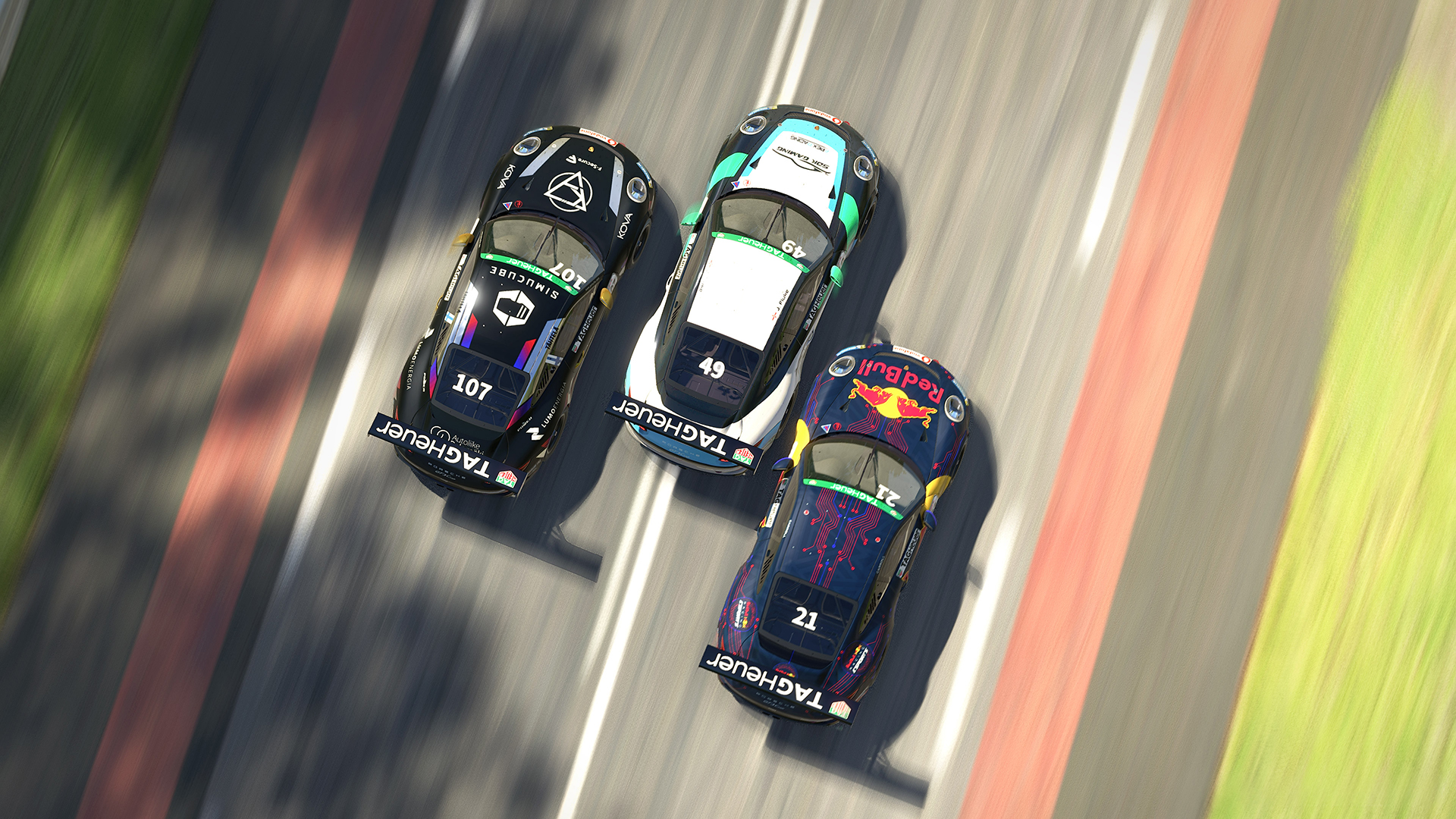 On the final lap, Fluke pounced at the second Mulsanne chicane. A bold move on Red Bull Esports ace, Graham Carroll, didn’t quite stick for Fluke. As a result, a mob of drivers piled into this fierce battle for second place.

On the swift approach to Indianapolis, Fluke found himself sandwiched between Carroll and Tahtela. Pinched between two rivals, Fluke ran out of room and his #49 Apex Racing Team Porsche catapulted into the gravel and the tyre barrier. A devastating end to a valiant charge from the 2019 iRacing Petit Le Mans winner.

Fluke’s heartbreak contrasted with the fortunes of Kevin Ellis Jr. and Yohann Harth. Amidst a variety of contenders flying off the circuit, Ellis Jr. and Harth slipped through the chaos to pinch sixth and seventh, respectively. Proof that good race craft and tenacious attitude can overcome a disappointing qualifying session. Jarrad Filsell and Antoine Higelin moved up the field to twenty second and twenty fifth places, respectively.

As further reward for excellent performances in race one, Kevin Ellis Jr. and Yohann Harth started the feature race from sixth and seventh places. Starting from the third and fourth row gave the ART duo opportunity to fight in the lead pack.

In the opening laps, Kevin Ellis Jr. nested in the leading train in fifth place. Yohann Harth slipped outside of the top ten amongst the opening melee.

Gaining the aerodynamic ‘tow’ from competitors and careful positioning within a pack would be the order of the day. Such is the nature of Le Circuit de La Sarthe. With three laps to go, Kevin Ellis Jr. found himself in the second pack as the top three of Rogers, Job and De Jong escaped. 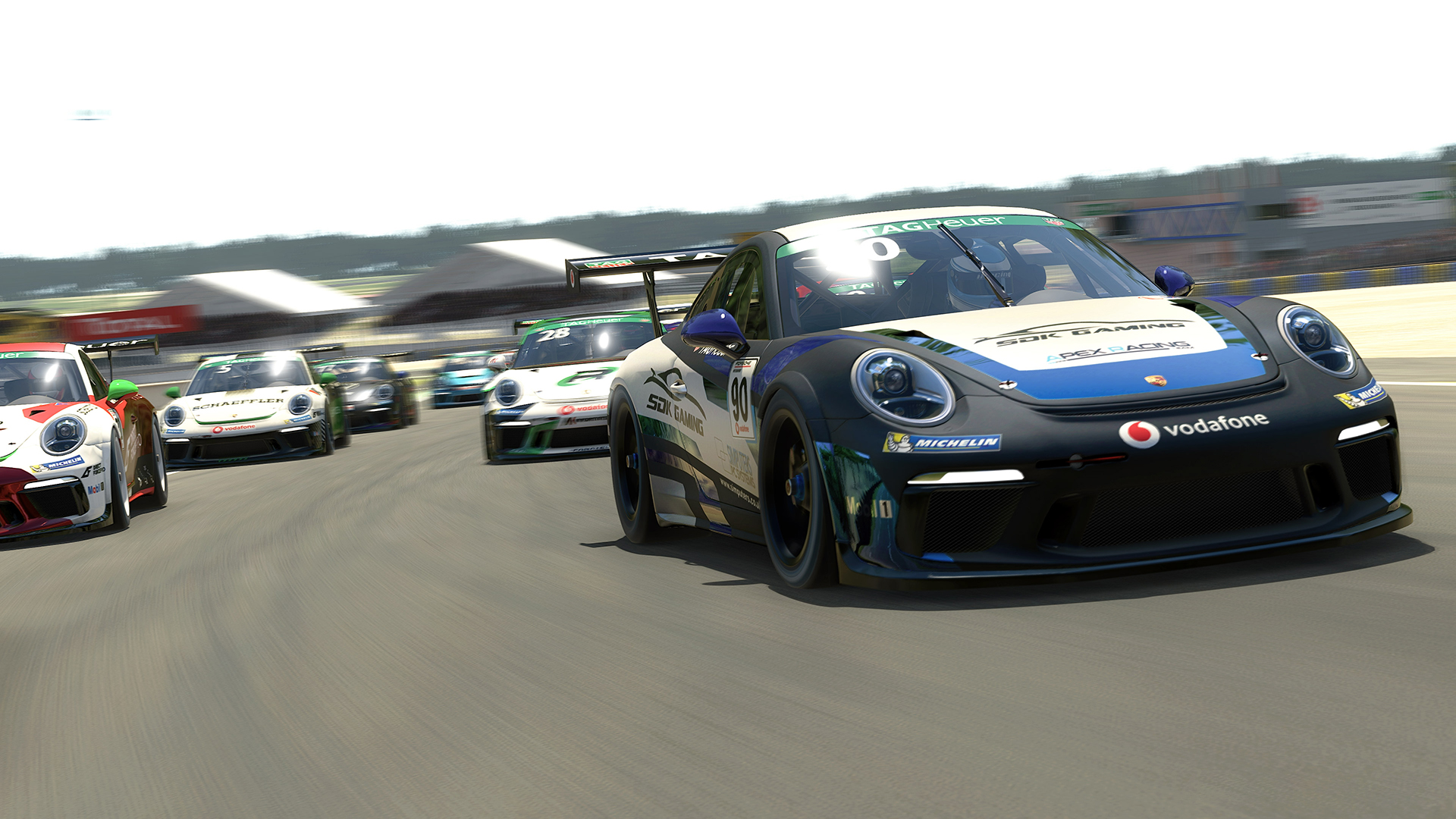 In the end, Kevin Ellis Jr. maximised his race result. Finishing sixth and crucially, at the front of his pack. After a difficult qualifying session, the Scotsman fought valiantly throughout the event to score solid championship points. Furthermore, Ellis Jr. moved up to fourth place in the championship, ahead of iRacing’s highest ranked driver-Maximilian Benecke.

Yohann Harth couldn’t recover from a challenging opening lap and finished in sixteenth place. Sprint race victory contender, Jamie Fluke, had a near impossible task to score points. With the feature race grid defined by the finishing order of the opening sprint race, Fluke paid handsomely for the sprint race crash and started from the back of the field. A fight to twenty third place was as much as Fluke could have hoped for, in the circumstances. Jarrad Filsell and Antoine Higelin finished in twenty-seventh and twenty-eighth place, respectively. 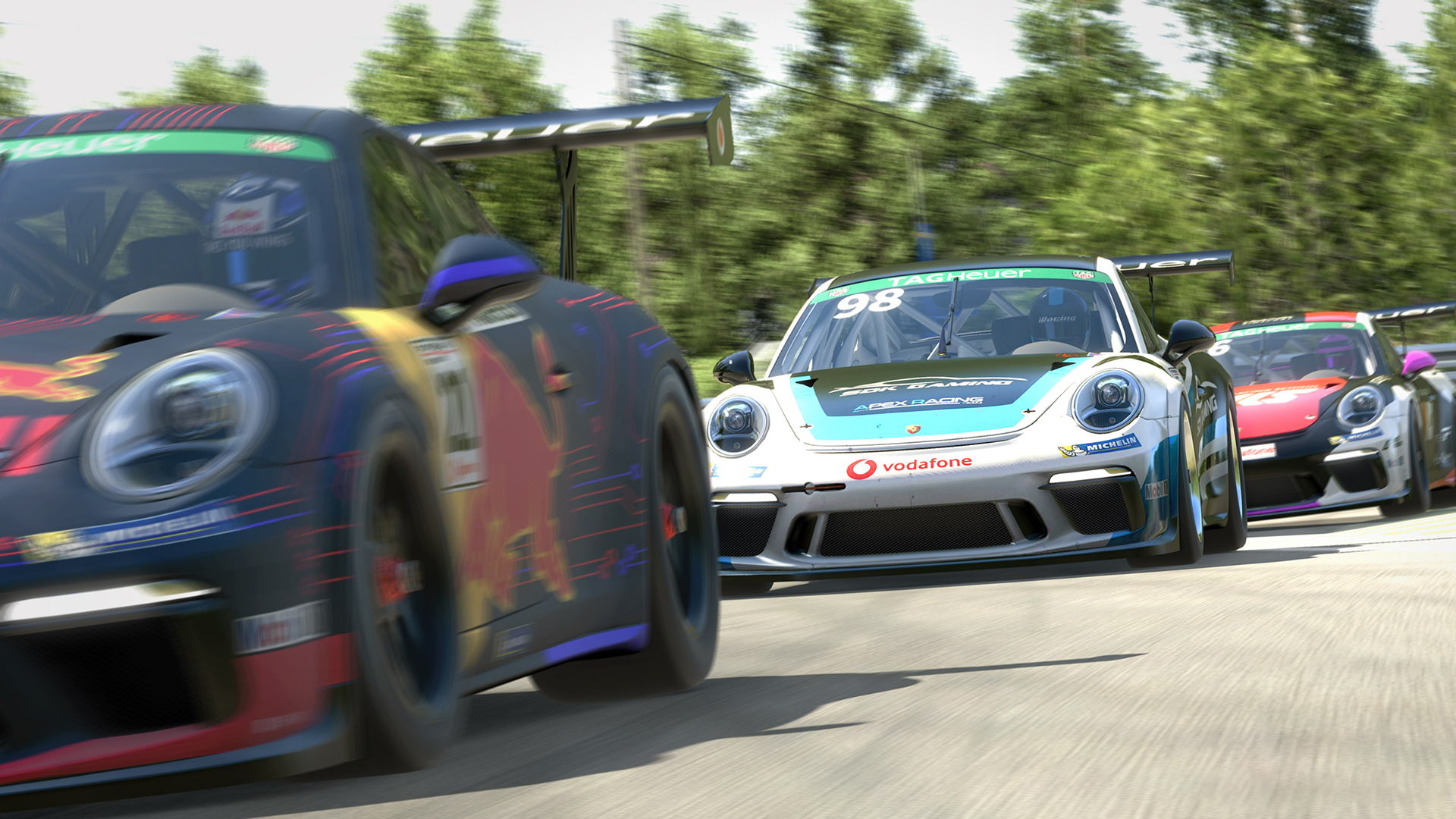 Yohann Harth: “Mixed feelings after this one. I started fifteenth in the sprint race but I had a strong opening lap following Kevin, who was starting right ahead. For almost the entire race I sat in twelfth but got away with a lucky sventh place after the last lap incidents. The Feature race wasn’t as good for me though. Big contact at the Dunlop Chicane left me with bad damage. Then I got a slowdown penalty in the last chicane and went from ninth to fifteenth. I also made contact with Carl E Jansson at the start of lap five in turn one which may result in a qualifying ban for the last round of the season at Monza. I’m fifteenth in the standings – the goal for Monza is to stay in the top twenty to keep my license”

Jamie Fluke: “I put together two strong qualifying laps to get  into the top eight. Sixth is my best qualifying of the season and left me third on the grid and in prime position for a good result. Unfortunately, Graham Carroll lacked pace in the sprint race and we were getting dropped by Mitchell by the last lap. So, I decided to try and be positive going into the 2nd Mulsanne chicane. We ended up side by side all the way to Indianapolis and bringing the pack in towards us. Then Tuomas decided to make it three wide into Indianapolis and put me in an impossible position. I was in the middle and had a car directly behind me so I couldn’t back out of the situation. Being forced to send it, I got pinched in the middle and tipped into the wall. I’m furious at the outcome. In the feature, I was left backwards and with damage after the first chicane. It should have been a far better result than the 3 points I ended up collecting.”

Kevin Ellis Jr.: “I had an awkward 24 hours leading up to this round. When I woke up on race morning, I was unsure if I could start but managed to get myself on the grid. In qualifying, I struggled to get into my groove and had a lap disallowed at the final chicane whilst tracking a P6 time. On my second attempt, I lost two tenths being cautious to ensure I set a lap to avoid starting at the back. Passing was difficult, so I had to stay patient until a massive crash into the last corner of the last lap of the Sprint promoted me from 11th to 6th! In the feature, I got away well but the tires fell away slightly and I made a few mistakes and dropped to 7th. I had a close fight with Mack Bakkum on the last lap to regain 6th but my rear just snapped and I clipped him, sending him back down the order. Overall a double P6 is solid enough for me to move up into 4th in points heading into the last round.” 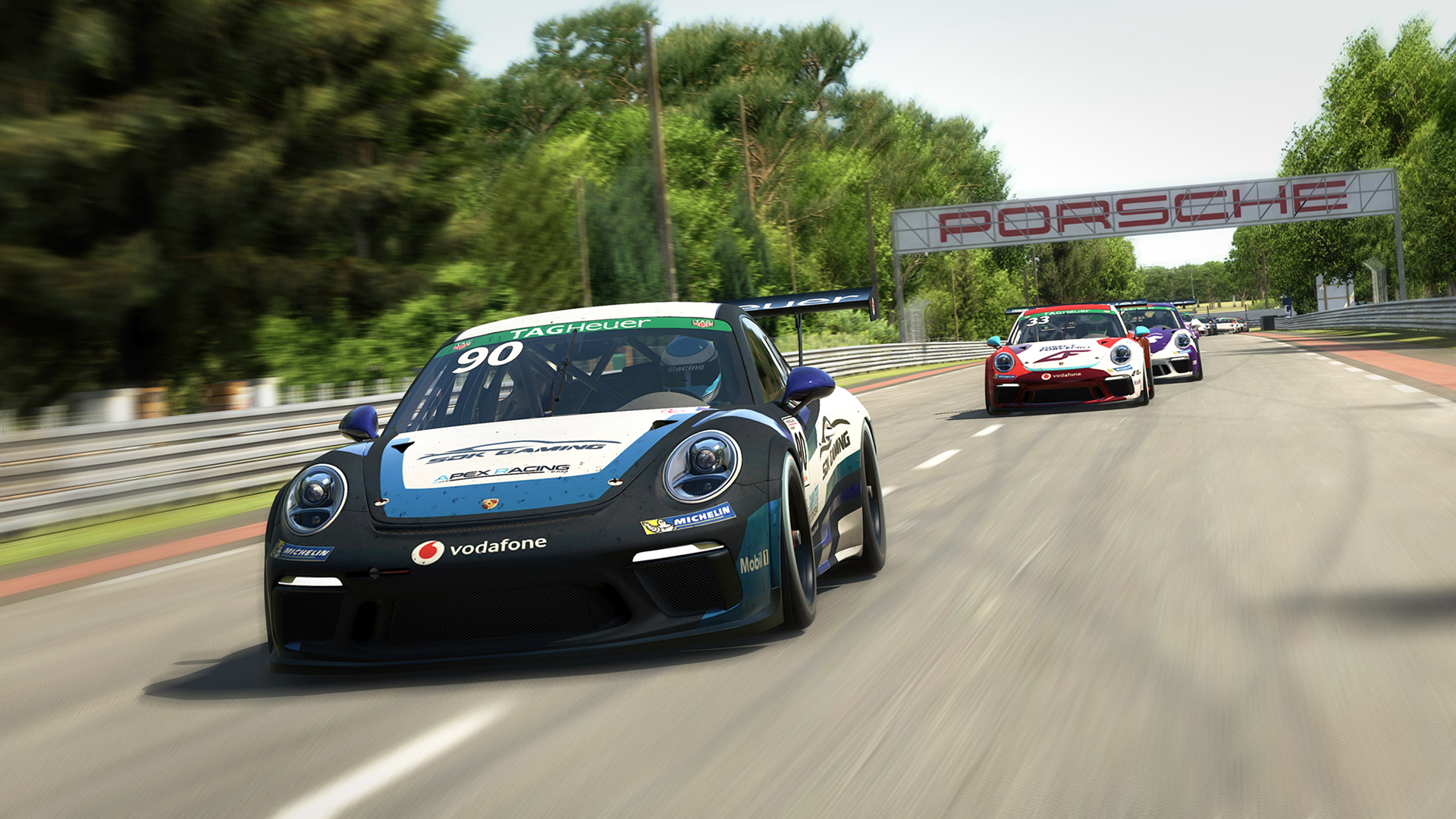