By Peter MacKaySeptember 24, 2020No Comments

Apex Racing team duo, Jamie Fluke and Antoine Higelin, headed to Road Atlanta on Sunday for the BMW Sim 120 Cup. A place at the season final in Munich and $1200 were on offer but Fluke and Higelin would have to overcome stiff competition from the world’s best sim racers.

In the 1980’s, the circuit was owned by notorious drug smuggler and successful IMSA racer, Randy Lanier. At the time, it was not uncommon for Lanier and his friends to land their aircraft on the circuit’s lengthy back straight. Long after Lanier’s arrest, sports car racing hall of famer – Don Panoz – bought the circuit. Under Panoz’s ownership, the circuit flourished. With a vast fortune earned from inventing the nicotine patch, Panoz transformed the circuit to the world class facility that it is today. Panoz’s greatest legacy at Road Atlanta, is the inception of the American Le Mans Series in 1999. 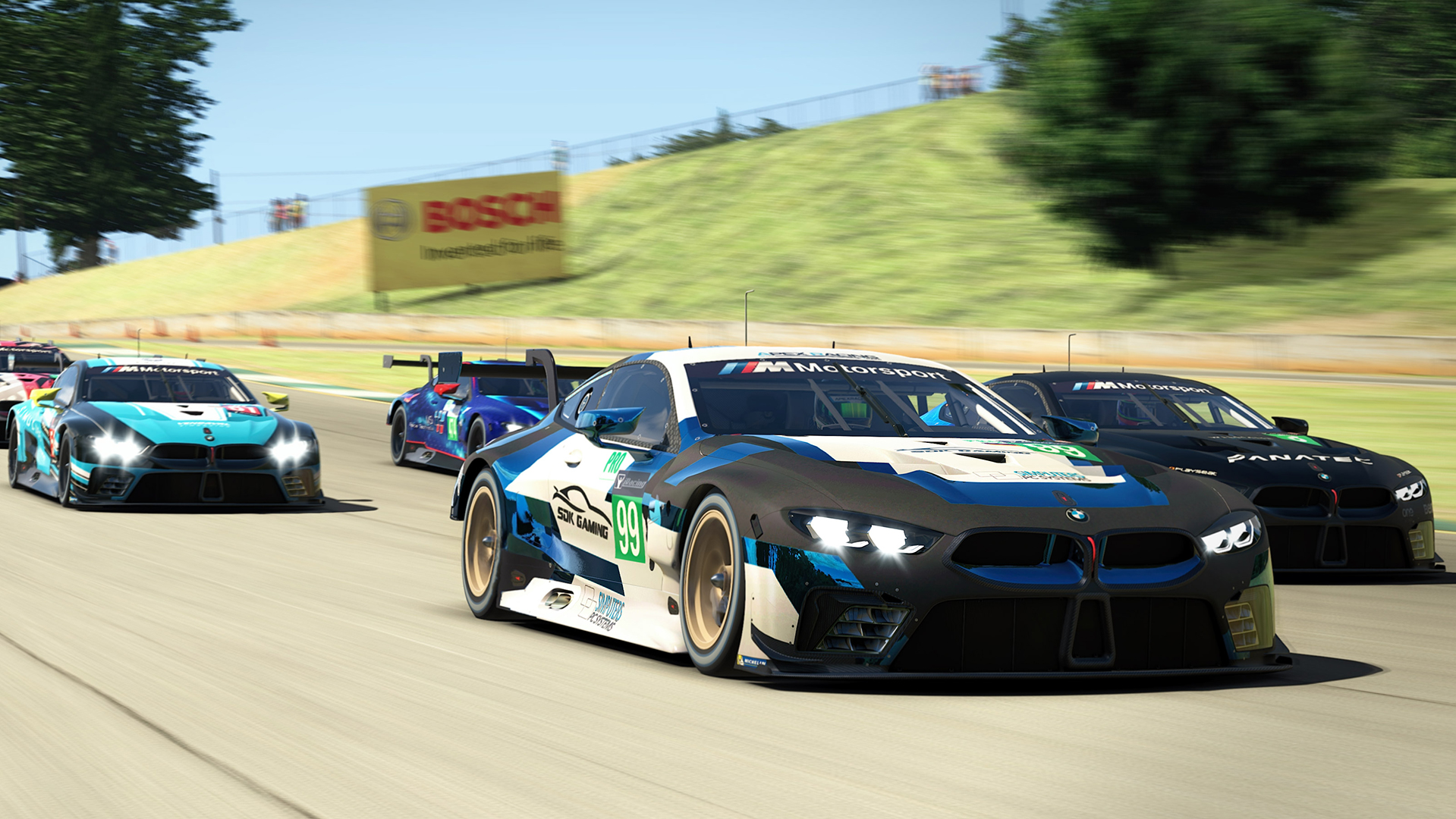 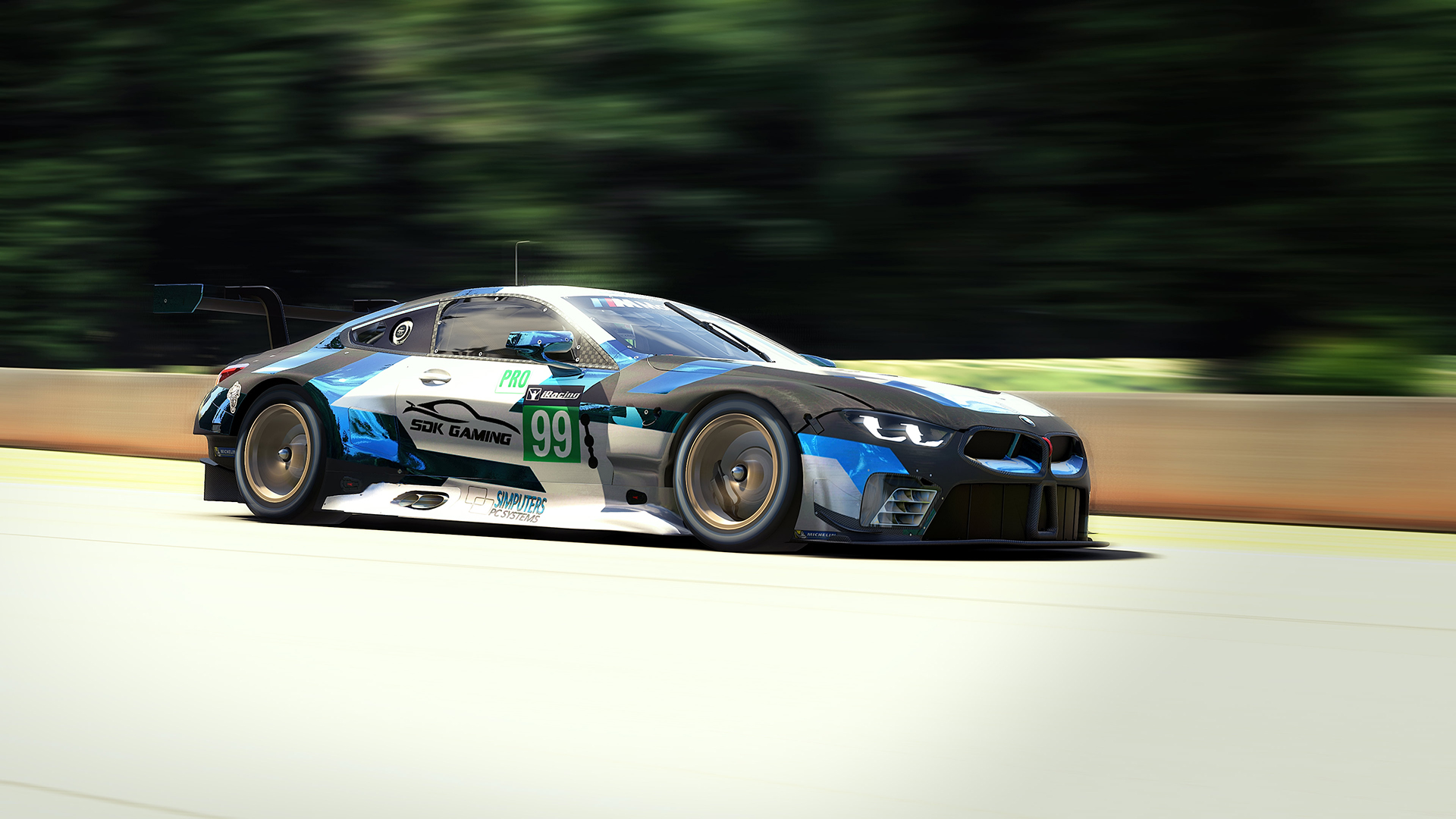 Officially backed by the Munich factory, the BMW Sim 120 Cup mandates all teams to use the firms monstrous M8 GTE machine. Curiously, the M8 GTE race car emerged prior to the release of the M8 streetcar. Although the M8 GTE failed to triumph at Le Mans, the car triumphed in the last two Rolex 24-hour races at Daytona. On a recent visit to Road Atlanta in the IMSA Weathertech Championship, the Rahal Letterman Lanigan run M8 conquered competition from Corvette and Porsche.

In qualifying, Jamie Fluke claimed seventh on the grid with a flawless lap. Fluke’s blistering time of 1 minute and 14.769 seconds trailed pole position by only 0.188 seconds and 0.052 seconds from F1 superstar, Max Verstappen. A fourth-row start, in a field of fifty-one cars, gave the Apex Racing Team optimism for the start of the race. 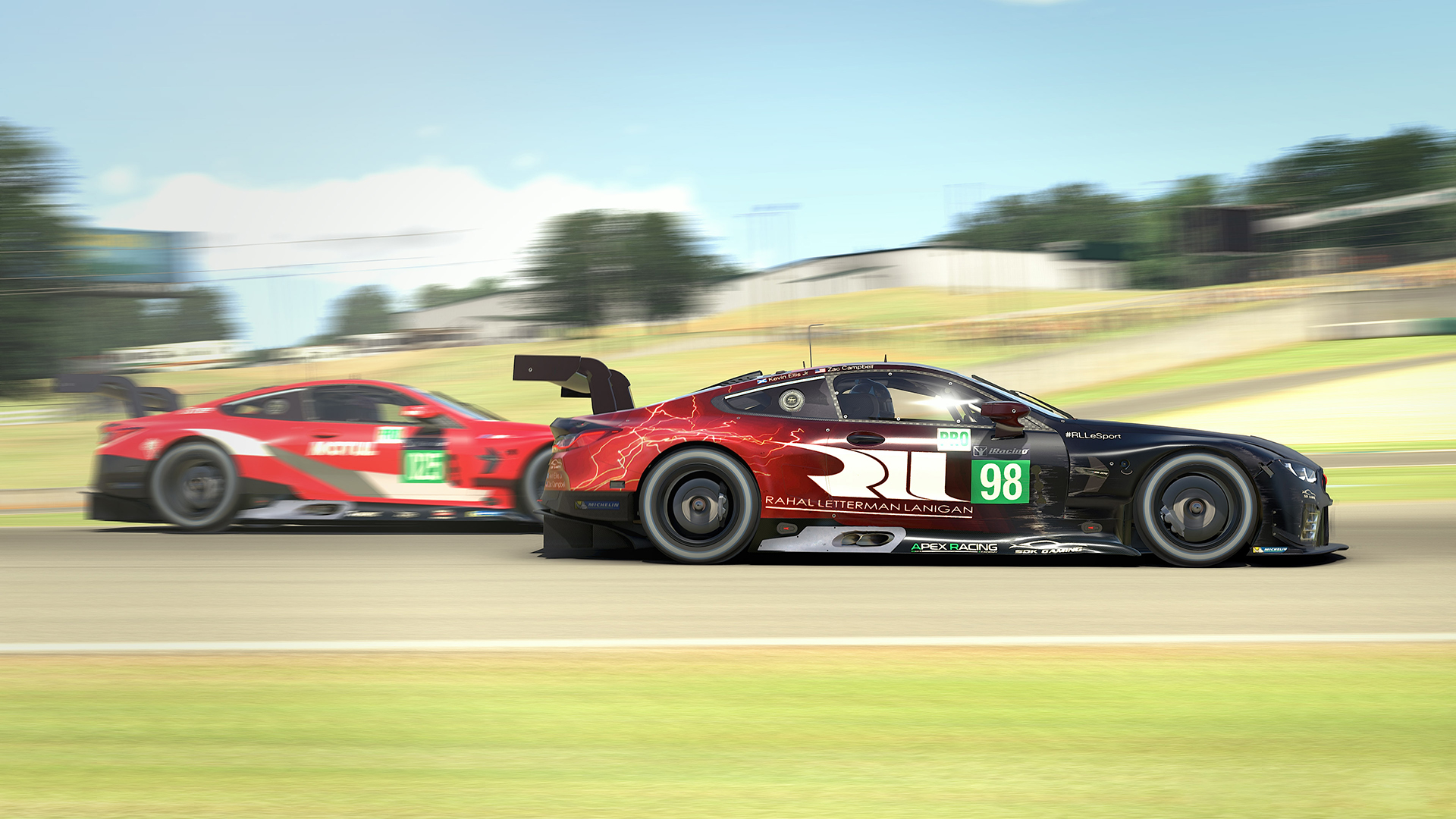 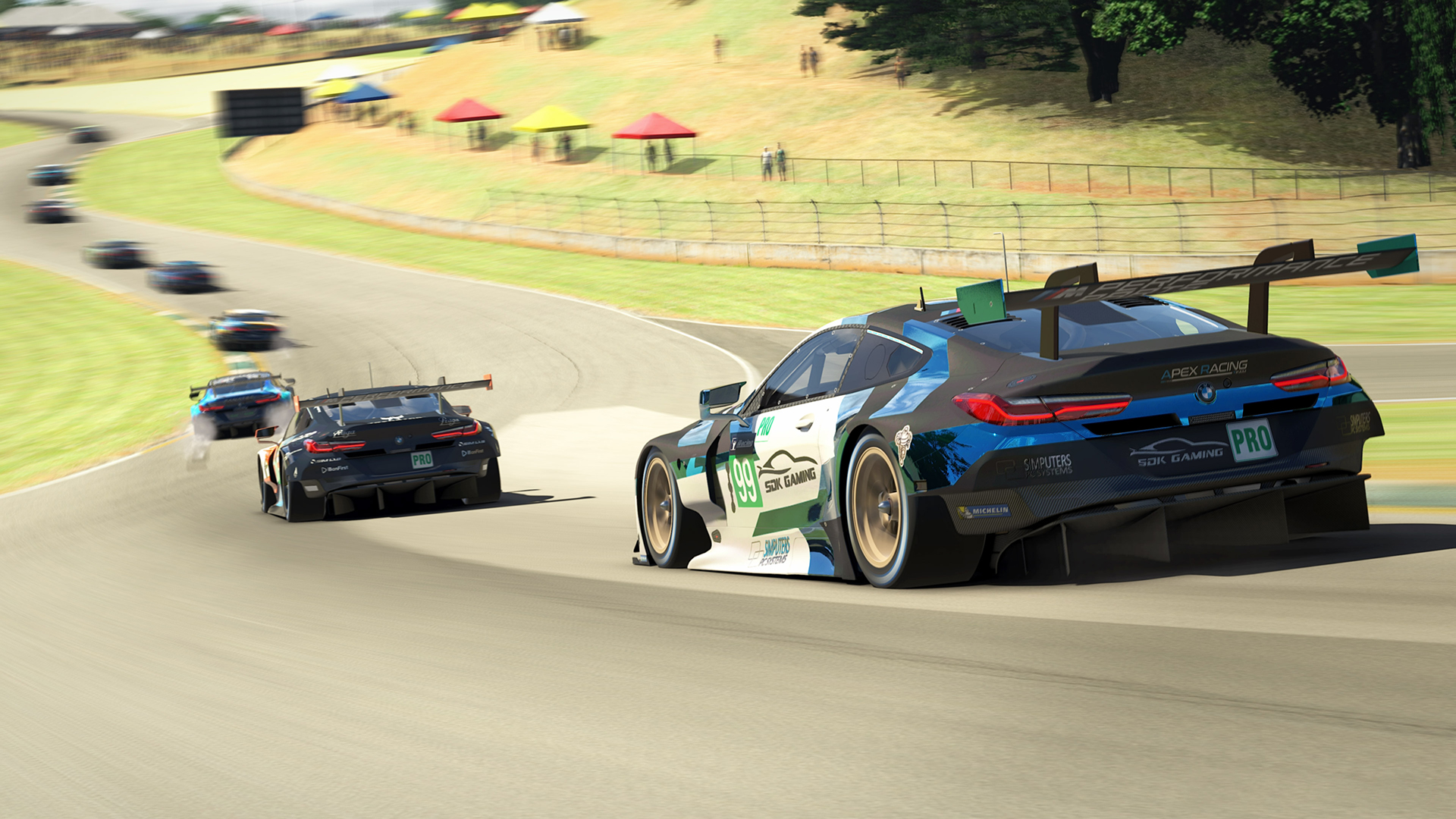 For many years, RLL have been entrusted to run BMW’s works GT effort in the IMSA Weathertech Sports Car Championship. The team have conquered the Rolex 24 hour at Daytona on the previous two occasions.

As a leader in North American motorsport, RLL have embraced the growth of Esports in recent times. For the Apex Racing team, collaborating with such a prestigious outfit as RLL, is an honour. Tag Heuer Porsche Esports Supercup ace Kevin Ellis Jr. received the call up to join ART teammate, Zac Campbell, in the #98 RLL BMW M8.

Ellis Jr. took the reigns for qualifying. An impressive lap of 1 minute and 14.842 seconds claimed a spot on the sixth row of a packed grid.

As the two-hour encounter roared into action, fifty-one cars sped around turn one and up the hill to Road Atlanta’s notoriously narrow Esses. Frustratingly, Jamie Fluke fell victim to the perilously lack of space available and was forced off the track. By lap two, the #99 Apex Racing machine was back in thirteenth in the vicious midfield melee. Fluke tenaciously held thirteenth place until lap eleven when the Apex Racing Team crew decided to pit early and roll the dice with a two-stop strategy. In theory, this would give the ART drivers the luxury to dismiss the concern of tyre wear and push for three shorter stints. However, a longer than expected stop to repair damage, left the #99 ART BMW M8 outside of the top thirty.

After a hard-fought stint, Jamie Fluke brought the ART BMW into the pits. With fifty minutes remaining, Antoine Higelin would take the car to the finish. ART’s fast Frenchman pushed hard throughout his stint, hauling the ART BMW to 23rd place. With just twelve minutes to go, disaster struck. A small mistake at the swift right hand first turn, sent Higelin straight into the barrier. ART’s hopes of a top twenty finish, were over.

Sadly, for the #98 RLL car, it would also be a day to forget. Kevin Ellis Jr. fell victim to the rough and tumble of a packed grid funnelling into Road Atlanta’s blind turn one. The bespectacled Scotsman valiantly fought back to twenty third place throughout the opening stint. However, a side swipe from Quentin Vialatte immediately before handing over to Campbell, undid all Ellis Jr.’s efforts. Although twenty sixth place is far from the desired result, both Ellis Jr. and Campbell can leave Road Atlanta with heads held high. With a clean run, the pair have enormous potential for a top result.

Following the race, Jamie Fluke reflected on a difficult day for the Apex Racing Team: “Qualifying went decently. A clean lap with no major mistakes put us 7th on the grid. We had more potential but it gave us a good platform to work from. Unfortunately, the race was poor from turn four onwards. We were run off the track and shuffled back into the pack. We tried the alternate pit strategy to try and maximise the raw pace of the car but every other car was faster in a straight line. Combined with the hotter conditions, the one stoppers made their strategy work and our attempt to push hard overworked the rear left tyre and we struggled from there” lamented the Northern Irish ace. 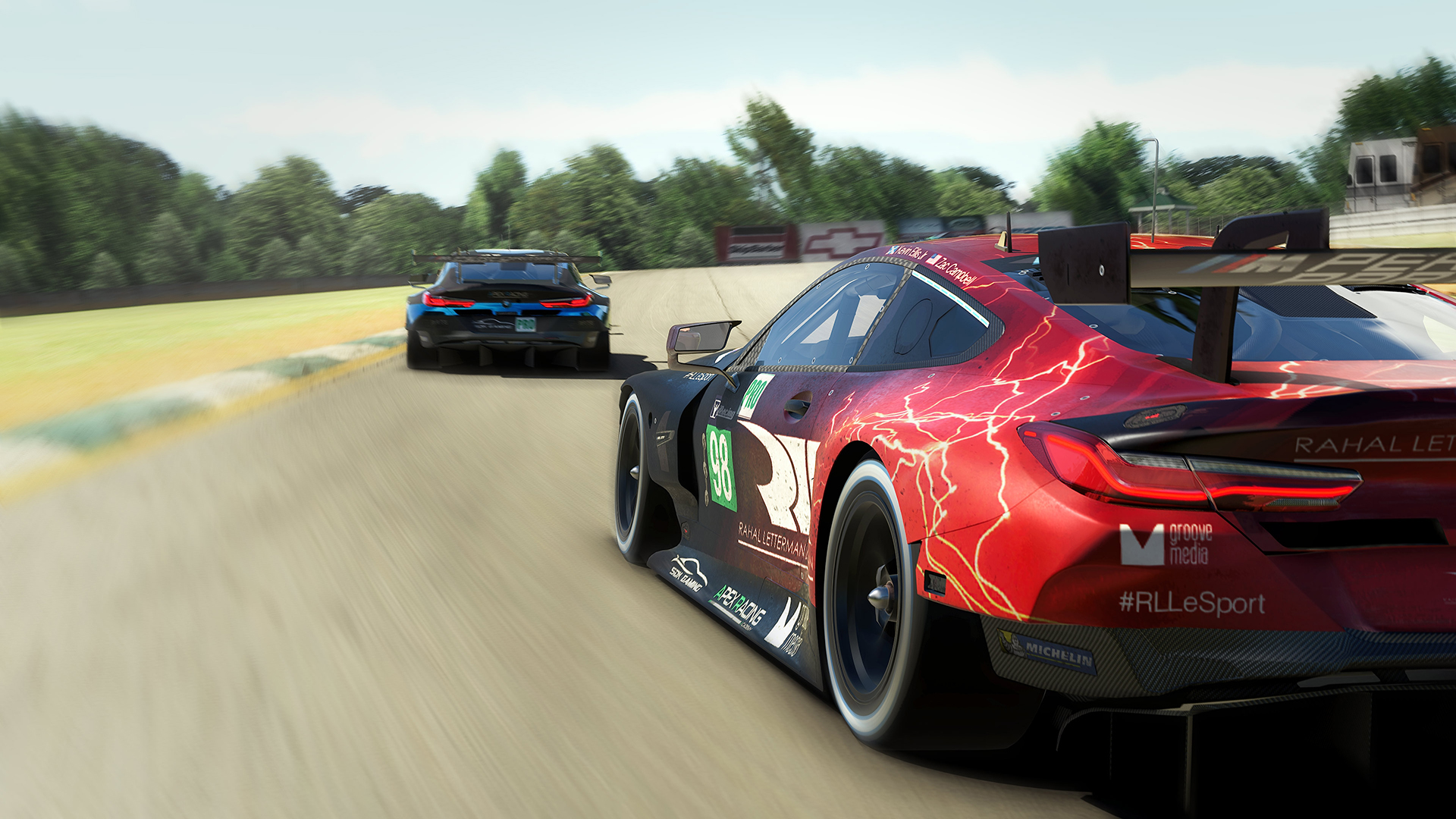 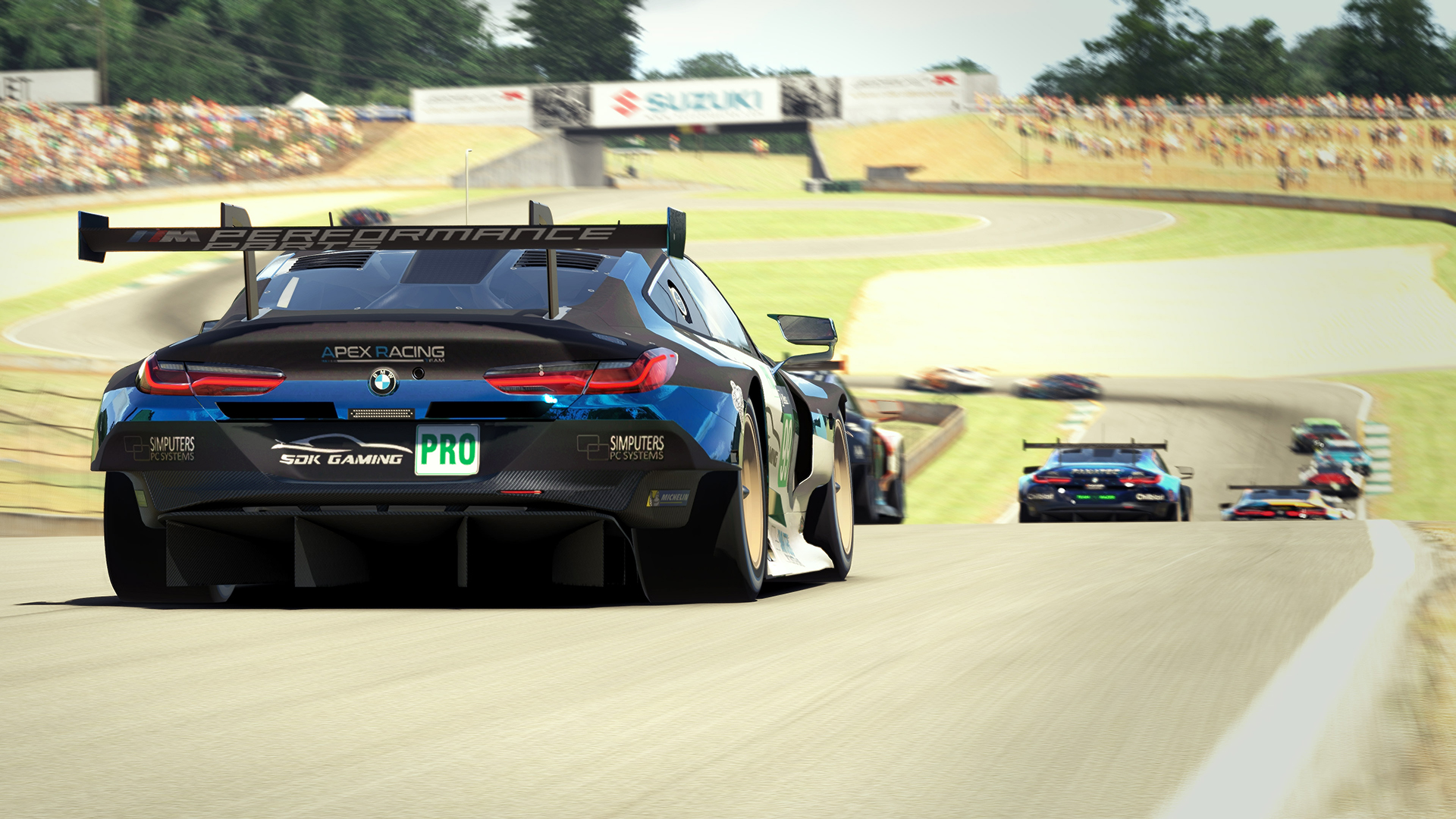 Although the BMW Sim 120 Cup at Road Atlanta would be a day to forget, the Apex Racing Team will be well prepared for the next major event-Petit Le Mans. On the third of October, the team will take on this ten-hour endurance epic. Tune in to the iRacing Esports network to catch all the action. 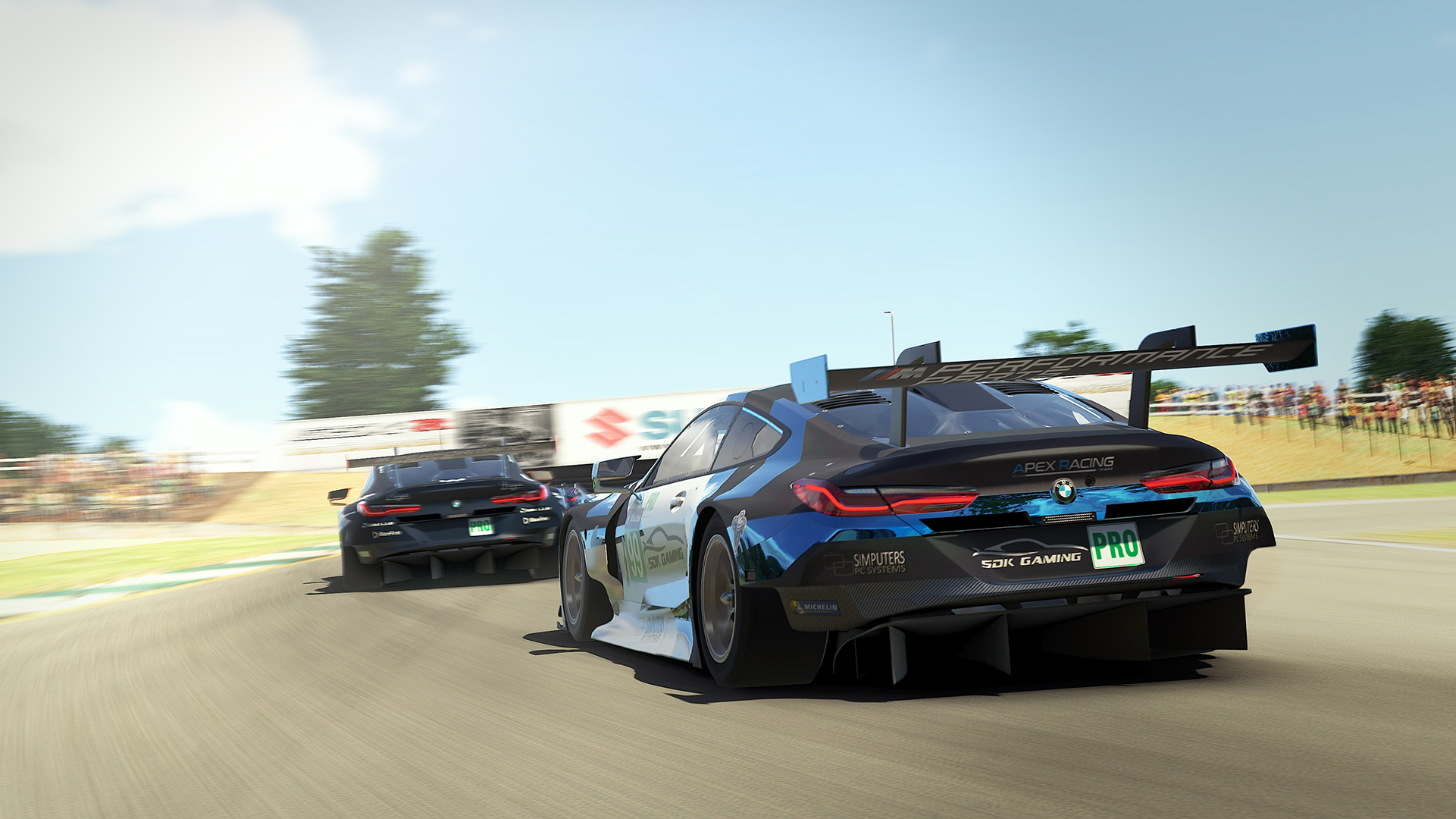