By Peter MacKayAugust 30, 2020No Comments

Fittingly, drivers from the Porsche Tag Heuer Esports Supercup looked to emulate their real-world counterparts in the Mobil 1 Supercup, who also run at Spa this weekend. For many drivers, the flowing layout of Spa Francorchamps is as good as it gets. An opinion that is tricky to contest.

An inversion of the top eight to set the grid for race one was kind to the Apex Racing crew. Kevin Ellis Jr. started second with teammate, Yohann Harth, immediately behind on the second row. Northern Irishman, Jamie Fluke, started from the seventh row, after a challenging qualifying run. 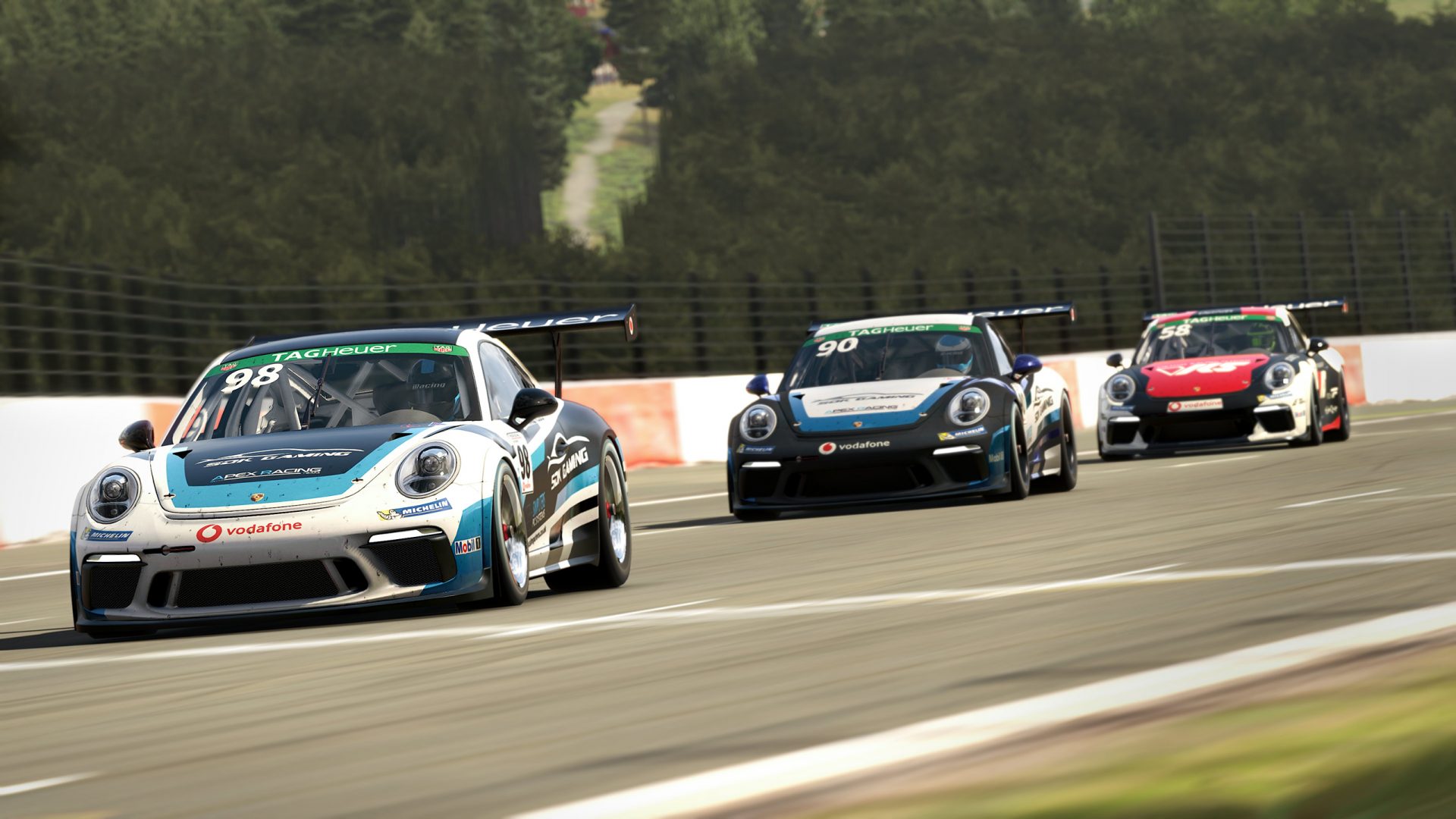 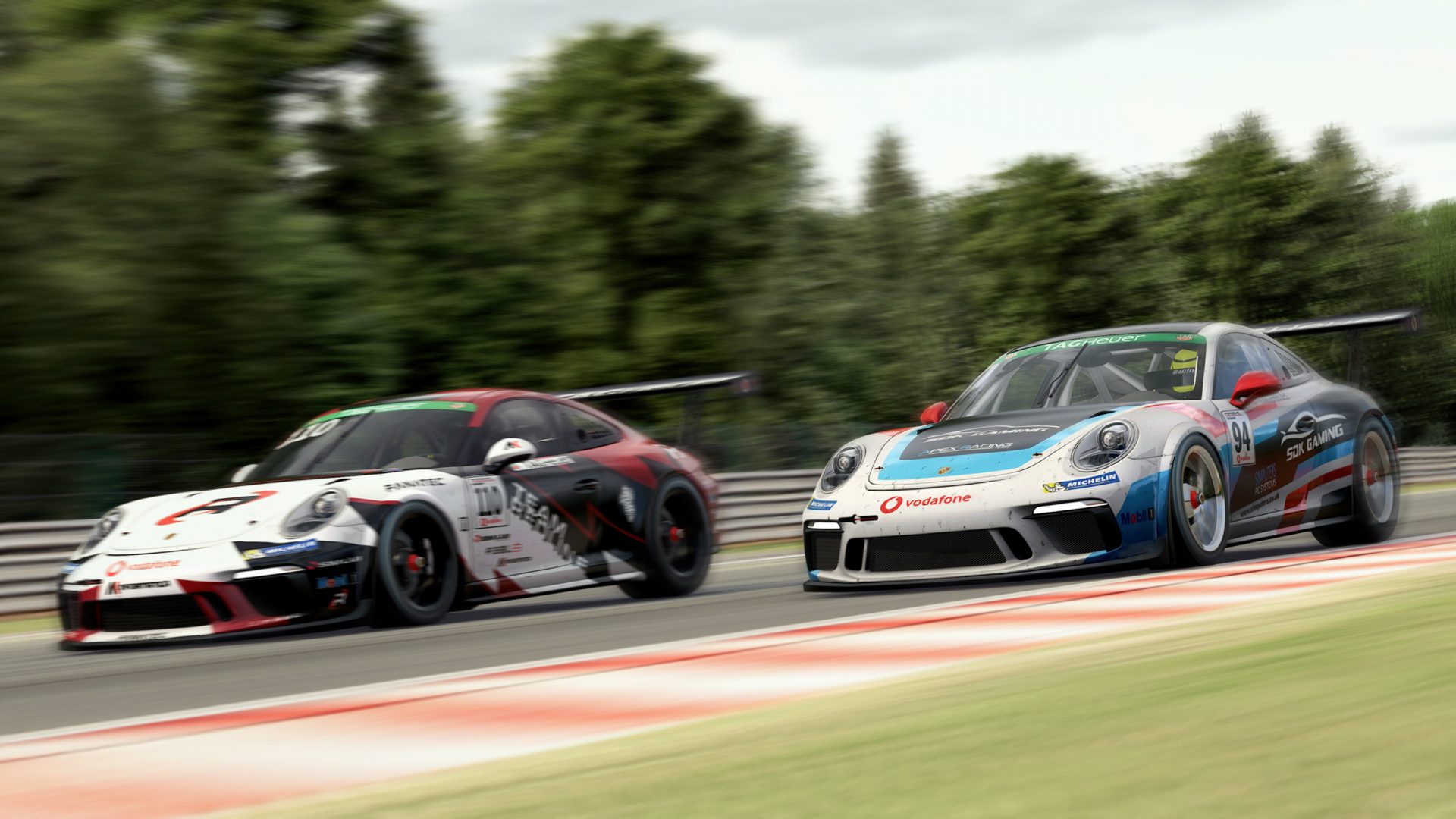 In contrast to its notorious reputation, the entire field negotiated La Source, without fuss. A vivid example of the quality of driving standards throughout the field. Charging up the Kemmel straight, Kevin Ellis Jr. made a break away with Mitchell Dejong, as a fracas broke out behind. In the epicentre of said fracas, was Yohann Harth.

Ellis Jr. settled behind Dejong until five minutes to go. An opportunist manoeuvre on the outside into Les Combes allowed the Glaswegian to claim the lead momentarily but at the cost of welcoming Sebastian Job along to the party.

With two and a half minutes to go, Ellis Jr. led out of Eau Rouge, but Job lurked in slipstream range, plotting an attack. Job primed his move on the Kemmel Straight and converted into Les Combes, pushing Ellis Jr. back to second. Unperturbed, Ellis Jr. shadowed Job all the way to the line, awaiting any mistake.

Sadly, Job would hold strong for the win. Nevertheless, a maiden podium gave plenty for the Scotsman to celebrate. Yohann Harth survived the intense brawl to finish in sixth place. Jamie Fluke and Jarrad Filsell, finished in eleventh and twelfth, respectively. 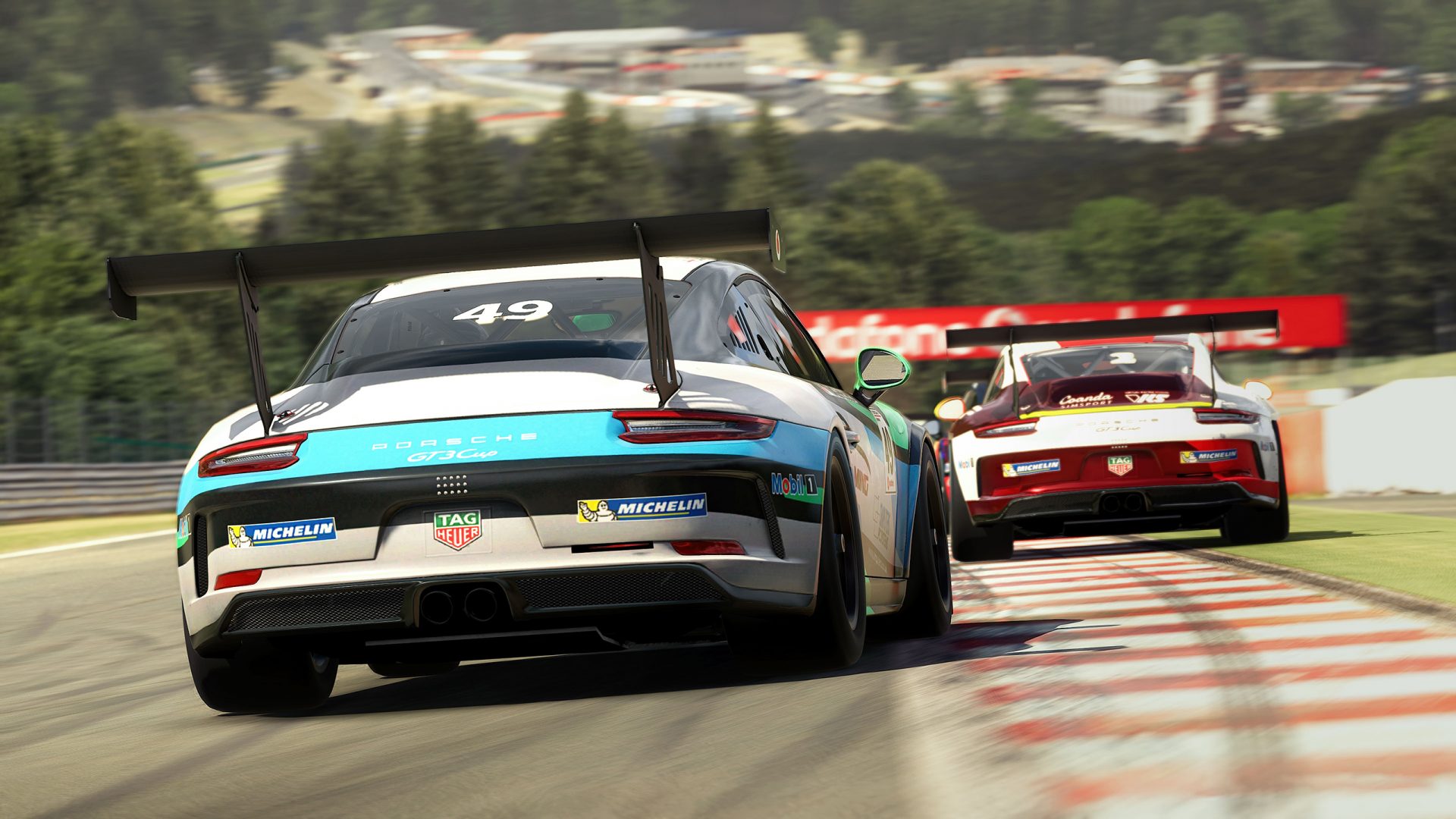 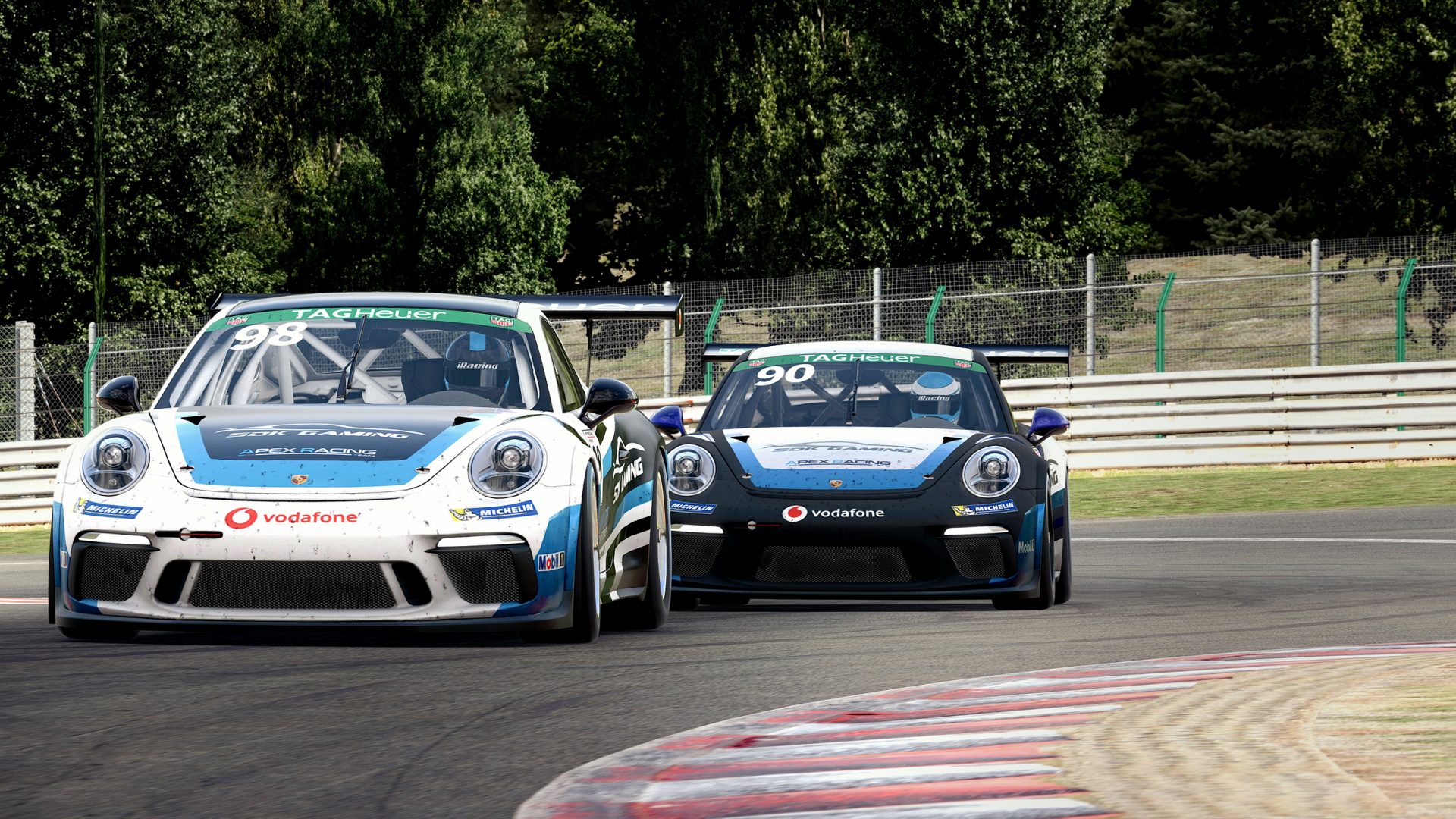 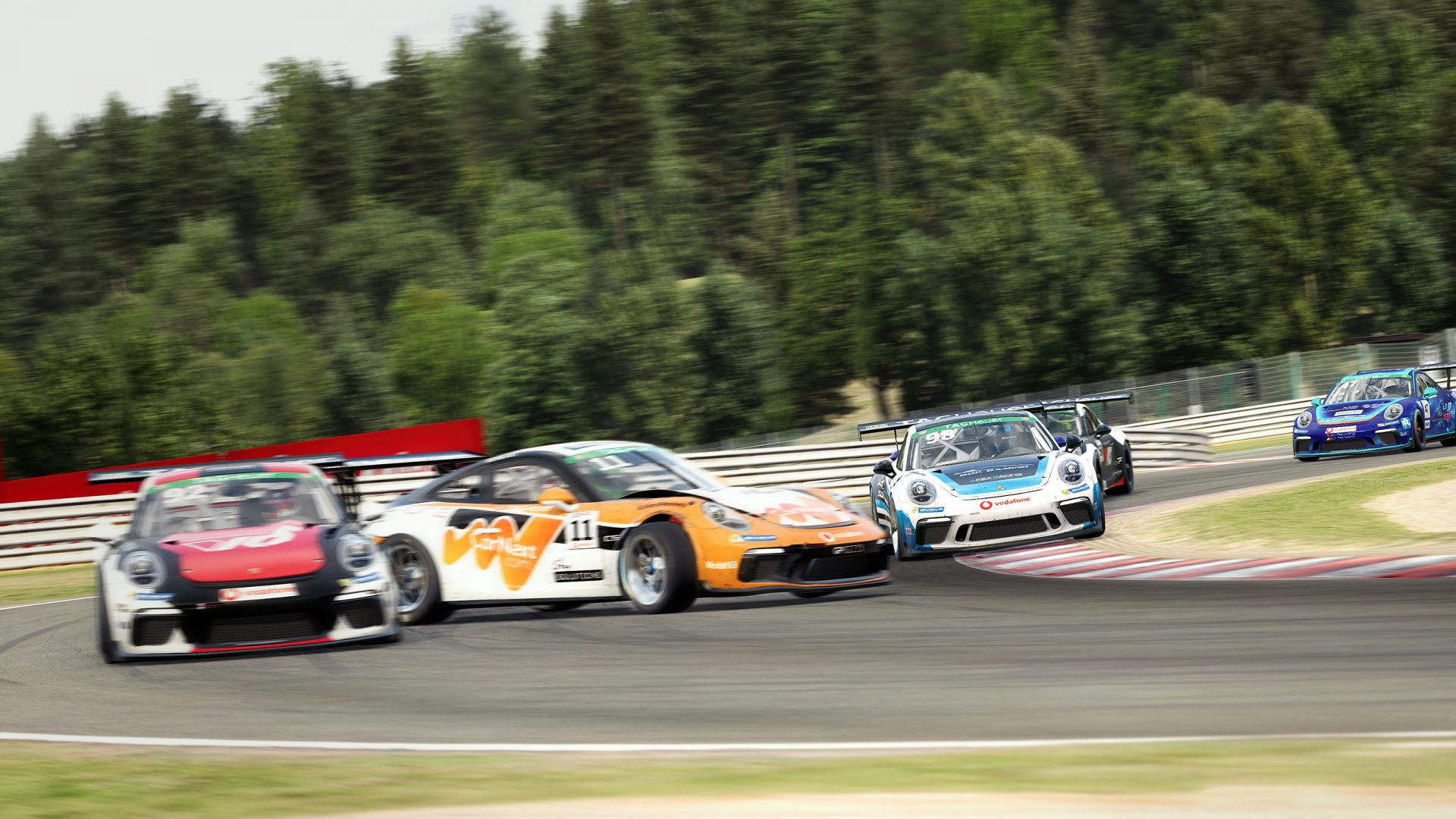 Heading to the feature, the Apex Racing Team quartet profited from their strong sprint race finishes with corresponding grid positions for the feature race. Therefore, Kevin Ellis Jr. would enjoy another clear view to turn one from the front row.

An early punch up left Ellis Jr. mired back in fifth after a difficult opening lap. An occupational hazard whilst tussling with the deepest quality of field anywhere in the sim racing world. Adelaide native, Jarrad Filsell, experienced an equally unpleasant opening circuit of the feature race. At the bus stop, where drivers slow from top to bottom gear, collisions are typically plentiful. An overambitious lunge from the #27 Red Bull machine of Patrick Holzmann resulted in heavy contact with Filsell, sending the Australian off track.

Nevertheless, fierce combat giveth and taketh away. A nudge from Joshua Rogers to the rear of Alejandro Sanchez, sent the 19-year-old Spaniard into a spin at the bus stop. Both Ellis Jr. and Harth profited from this skirmish, moving to fourth and fifth, respectively. With eight minutes to go, ART’s aces made further progress, due to another controversial incident ahead. Championship contenders Joshua Rogers and Maximillian Benecke aggressively piled into Les Combes, neither considering even the possibility of yielding. To their cost and Apex Racing Team’s gain. With Rogers and Benecke in the barrier, Ellis Jr. and Harth slipped by to permanently occupy second and third, respectively.

Yohann Harth: “What a weekend! This race couldn’t have gone any better for me. As I said in my pre-race tweet, it would come down to a good qualifying performance to stay out of trouble as much as possible. Job done. A steady drive in both races, collecting the pieces on my way up to the podium. I’m super proud of the team, our work finally pays off for me with two strong results in a row. I cannot wait for the last three rounds, starting with the Nordschleife, next weekend.”

Kevin Ellis Jr.: “What a weekend. I put in a tidy lap in qualifying, which put me second on the grid. I made my move mid-way through the sprint race and lead my first lap of the season and finished second. I kept out the way of the championship contenders in the feature race. I then picked up the scraps to get my first ever podium! 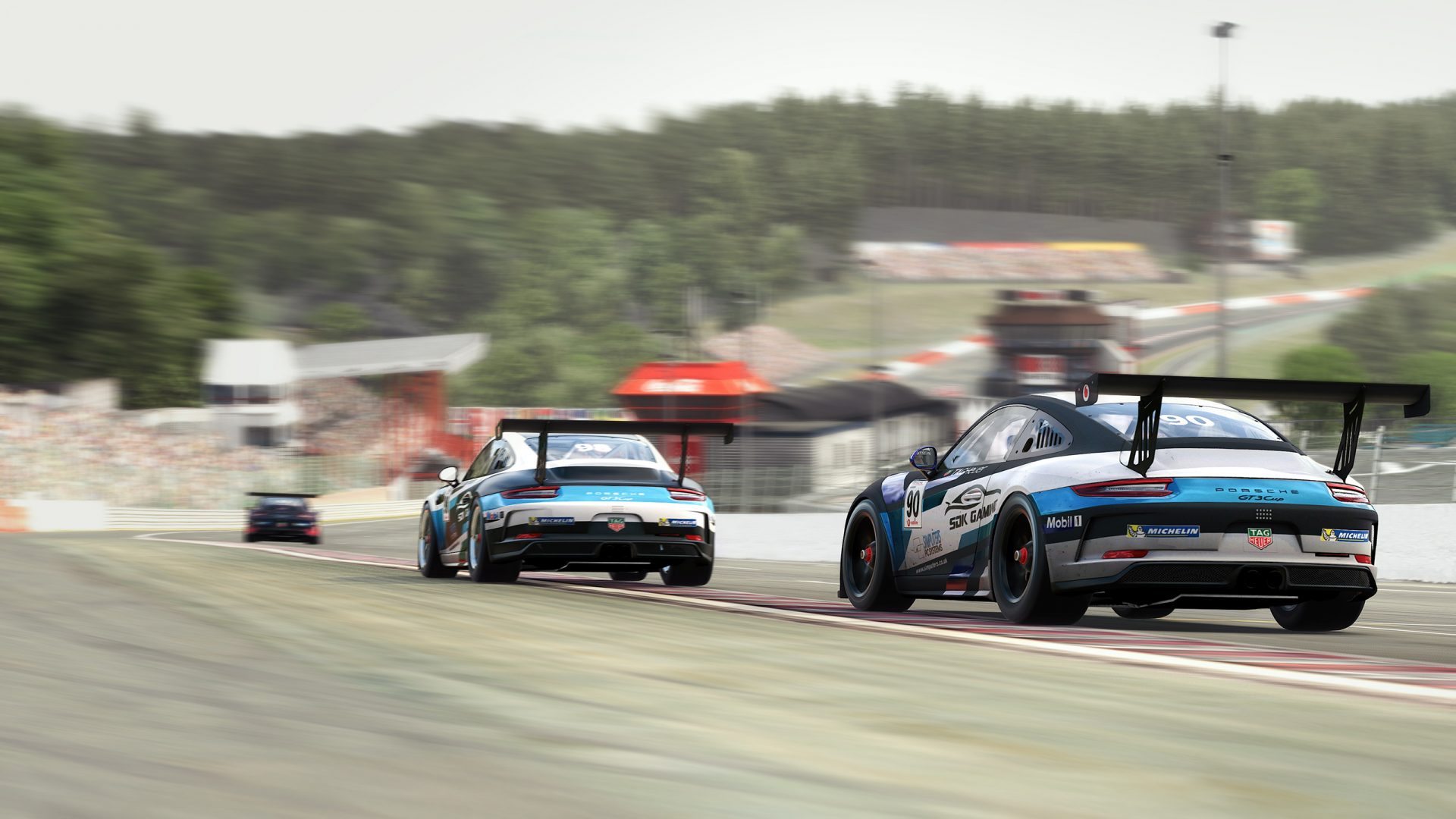 Jamie Fluke: “I had a poor qualifying performance after a tricky build up. P14 wasn’t anywhere near what I had in me which was disappointing. However, I was able to reset well and pick off the scraps fed to me during both races. I had a good battle with Graham Carroll in the feature race which I was able to come out on top of for eighth. A solid result. I’m now in the fight for a top 10 position in the standings!”

On Saturday the fifth of September, the Tag Heuer Porsche Esports Supercup heads to the most notorious circuit of all, the Nurburgring Nordschleife. Christened ‘The Green Hell’ by Sir Jackie Stewart, no circuit in the world tests a driver more sternly than the Nordschleife. Tune in to the iRacing Youtube channel at 2pm GMT for live coverage of what is sure to be an extraordinary spectacle. 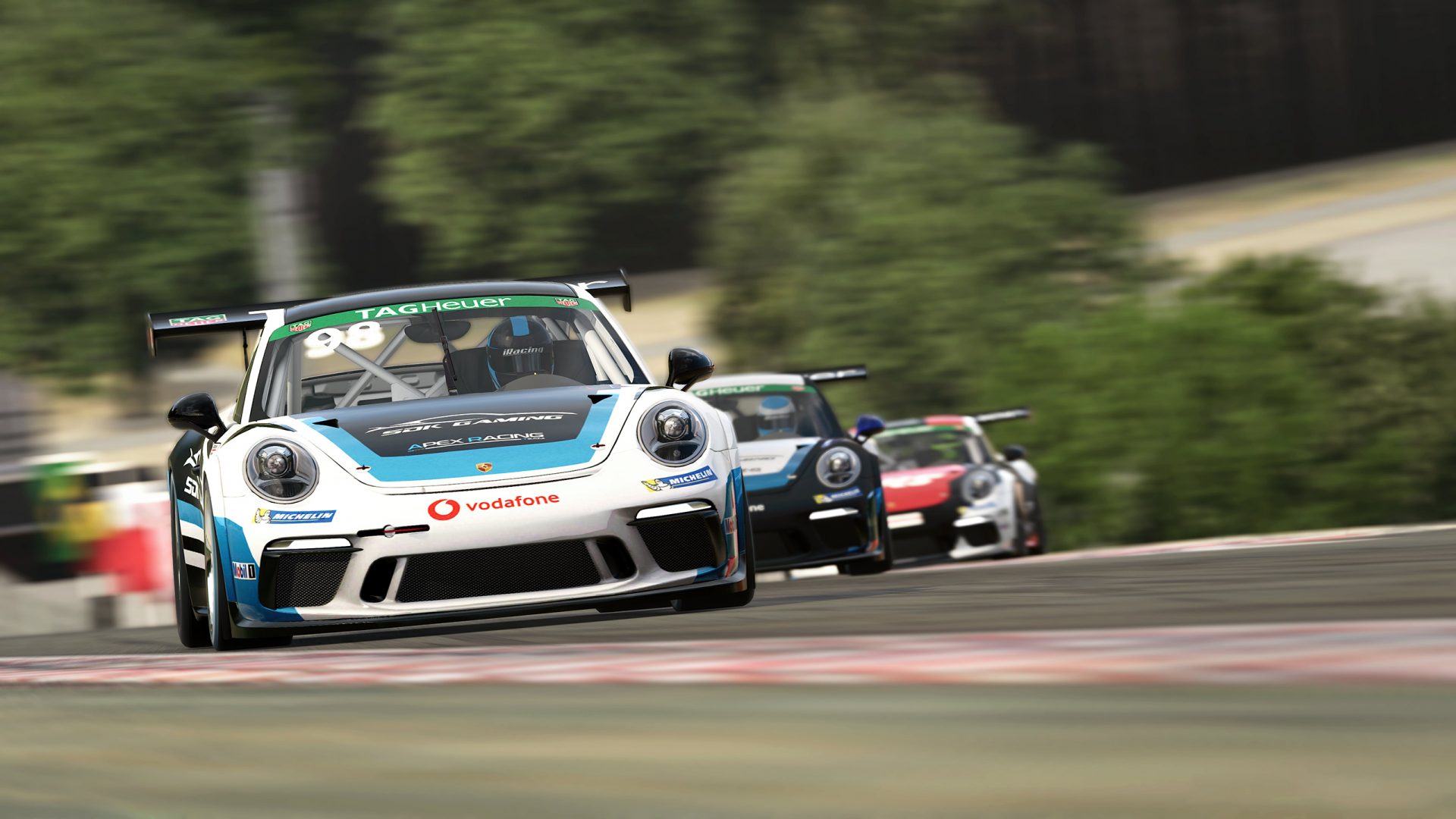