By Peter MacKayAugust 17, 2020No Comments

Jamie Fluke, Kevin Ellis Jr. and Yohann Harth charged to a brace of strong finishes in the  Porsche Tag Heuer Esports Supercup, at Brands Hatch, on Saturday. Amongst a star-studded grid, the Apex Racing Team trio all finished in the top eight in both sprint and feature races. The only team to do so.

As one of the world’s most prestigious Esports series, grid spots for the  Porsche Tag Heuer Esports Supercup are coveted. Drivers who finish the season in the top 20 of the championship, gain automatic entry to the next season. With five rounds to go, ART driver Jamie Fluke sat on the edge of the critical top twenty bubble. Pressure was on for the Northern Irishman to perform at Brands Hatch. 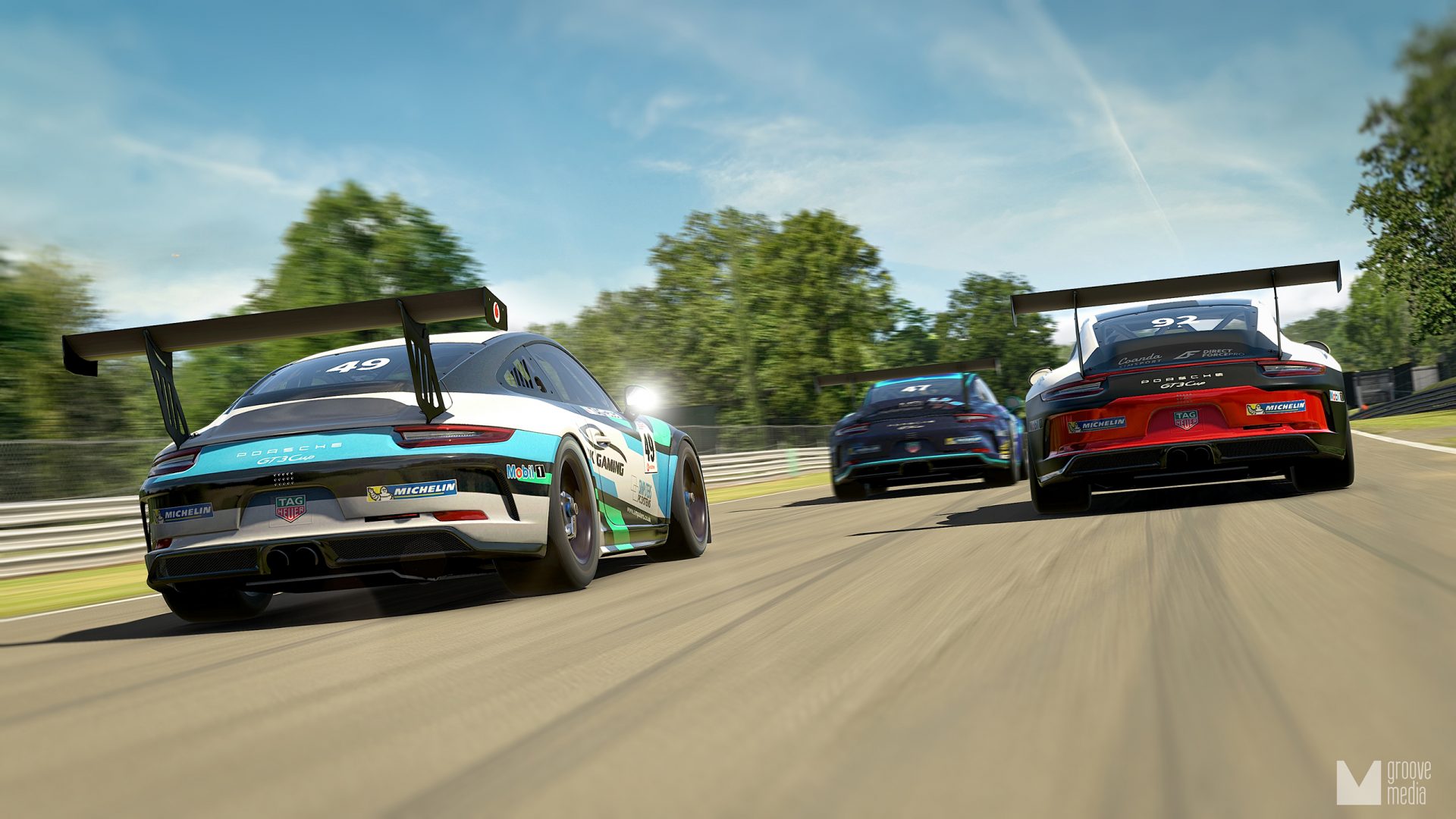 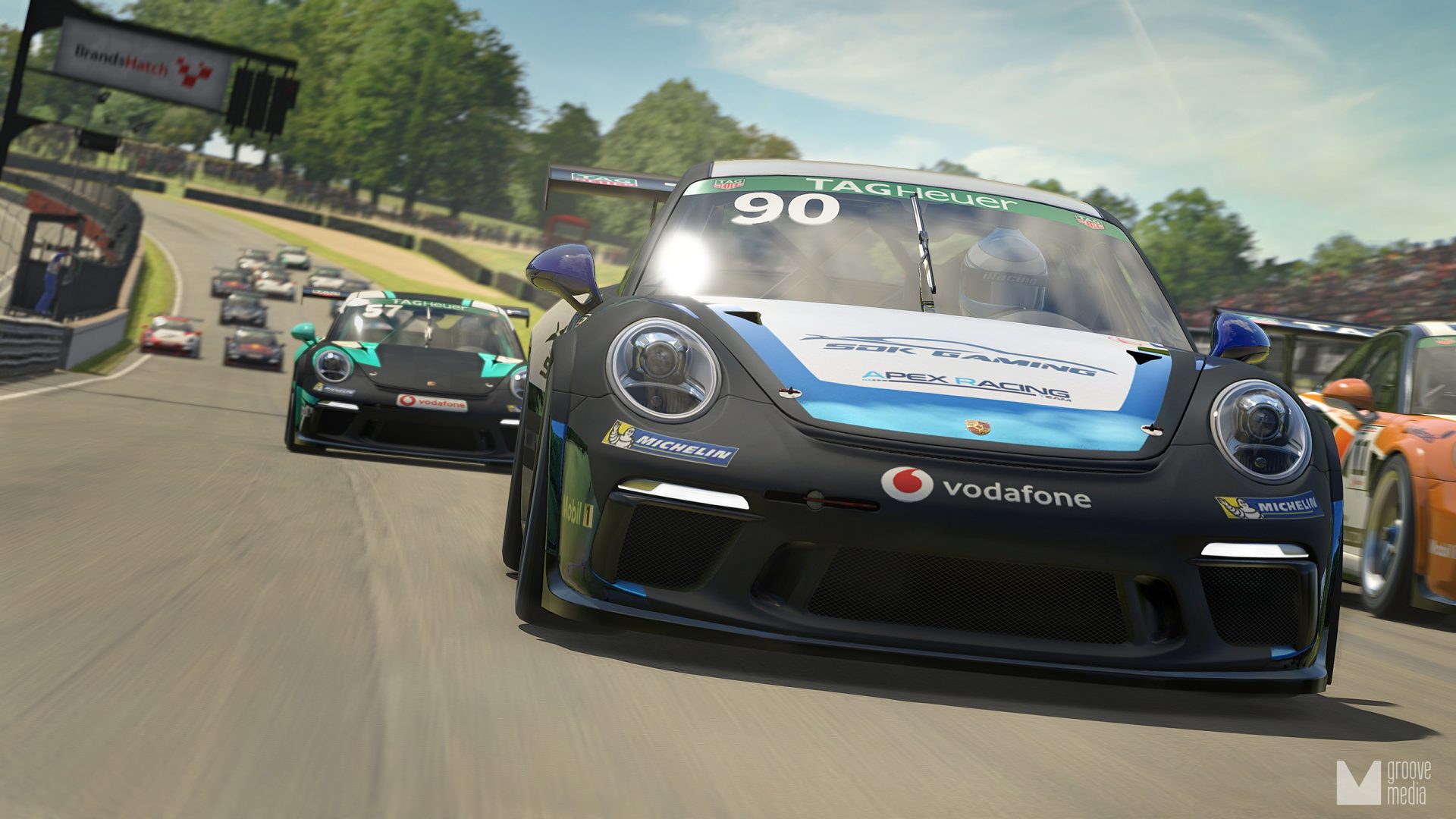 For qualifying, drivers had just three flying laps to put it on the line in pursuit of the Tag Heuer connected pole winners watch. Negotiating the swoops and swells of Brands Hatch in the fickle, rear engine, Porsche 911 Cup would put the finest sim racers on earth through their paces.

Kevin Ellis Jr. set a blistering pace to clinch the third fastest time. Yohann Harth and Jamie Fluke were sixth and eighth fastest, respectively. As a result of an inversion of the top eight in qualifying, Fluke found himself starting the sprint race from pole position.

Fluke seized the opportunity, with a storming drive in the sprint race. After an agonisingly long hold on the lights, Fluke launched his Porsche 911 GT3 cup machine perfectly and led into Paddock hill bend and through to Druids. Frenchman, Yohann Harth, maintained 3rd place from the start amongst the traditional lap one melee.

ART’s highest ranked driver in the championship, Kevin Ellis Jr., was impeded by others bickering around him. Championship contenders Sebastian Job, Maximillian Benecke and Joshua Rogers punch up through Pilgrims Drop and Dingle Dell, trapped the Glaswegian, who lost time in the process.

Jamie Fluke held Alejandro Sanchez at bay for a couple more laps. But, eventually, the rapid Spaniard sneaked to the outside at Graham Hill bend, tucked in front on the Cooper Straight and pinched the lead on the entrance to Surtees. With seven and a half minutes to go Rogers attempted to pounce on Fluke. With paint being traded and Rogers trying audacious moves around the outside, Fluke defended with gusto. As a result, Sebastian Job picked Rogers’ pocket coming out of Stirling’s.

Fluke defended with elegance and respect to his rivals, holding off two championship contenders until five minutes to go when the 25-year-old had to eventually yield.

With two laps to go, Fluke and Harth, pulled away from iRacing’s top rated driver, Maximillian Benecke, in convincing fashion. Claiming fourth and fifth place, respectively. Kevin Ellis Jr. finished eighth, after being mired back in the pack in the early stages. 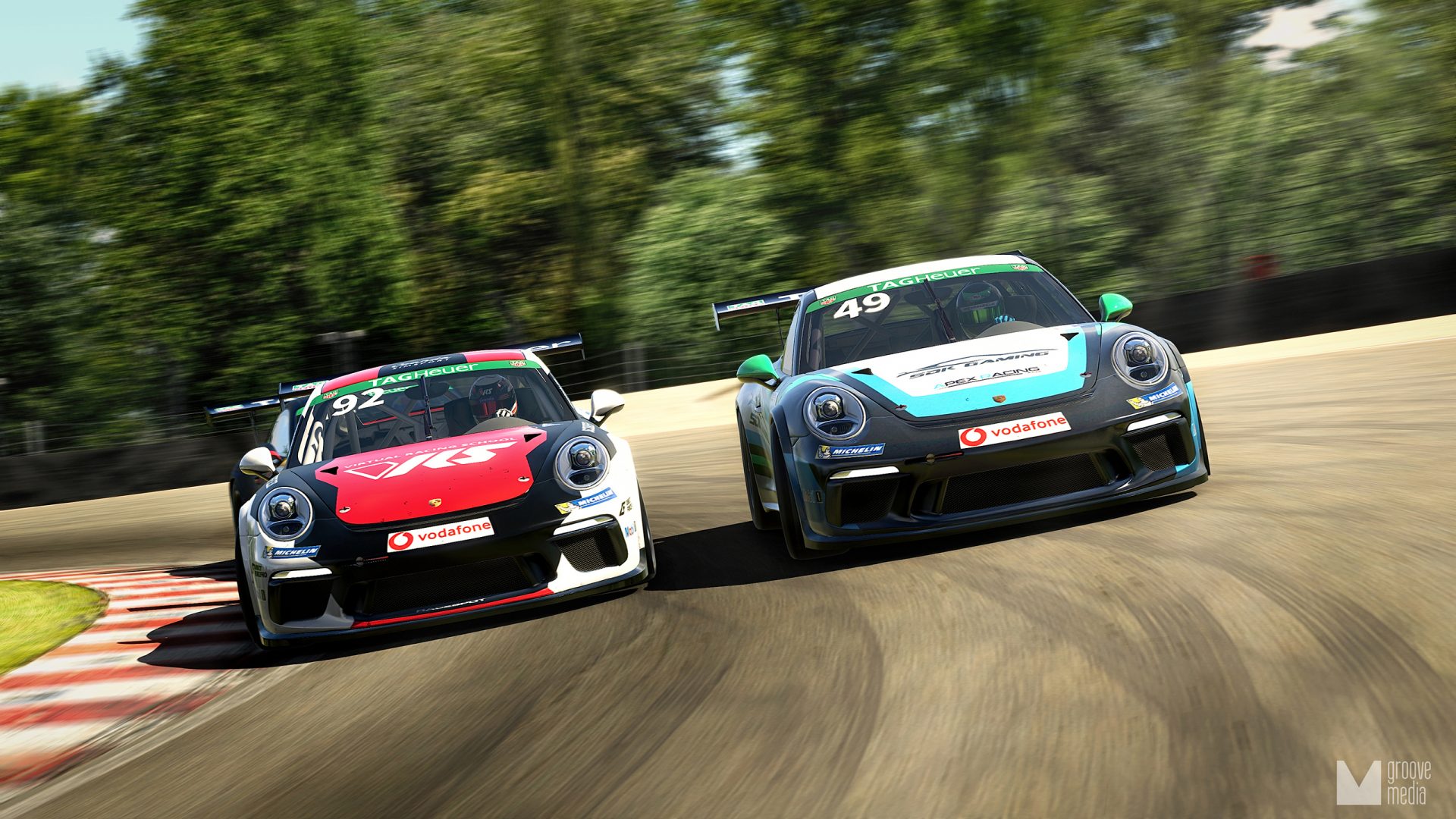 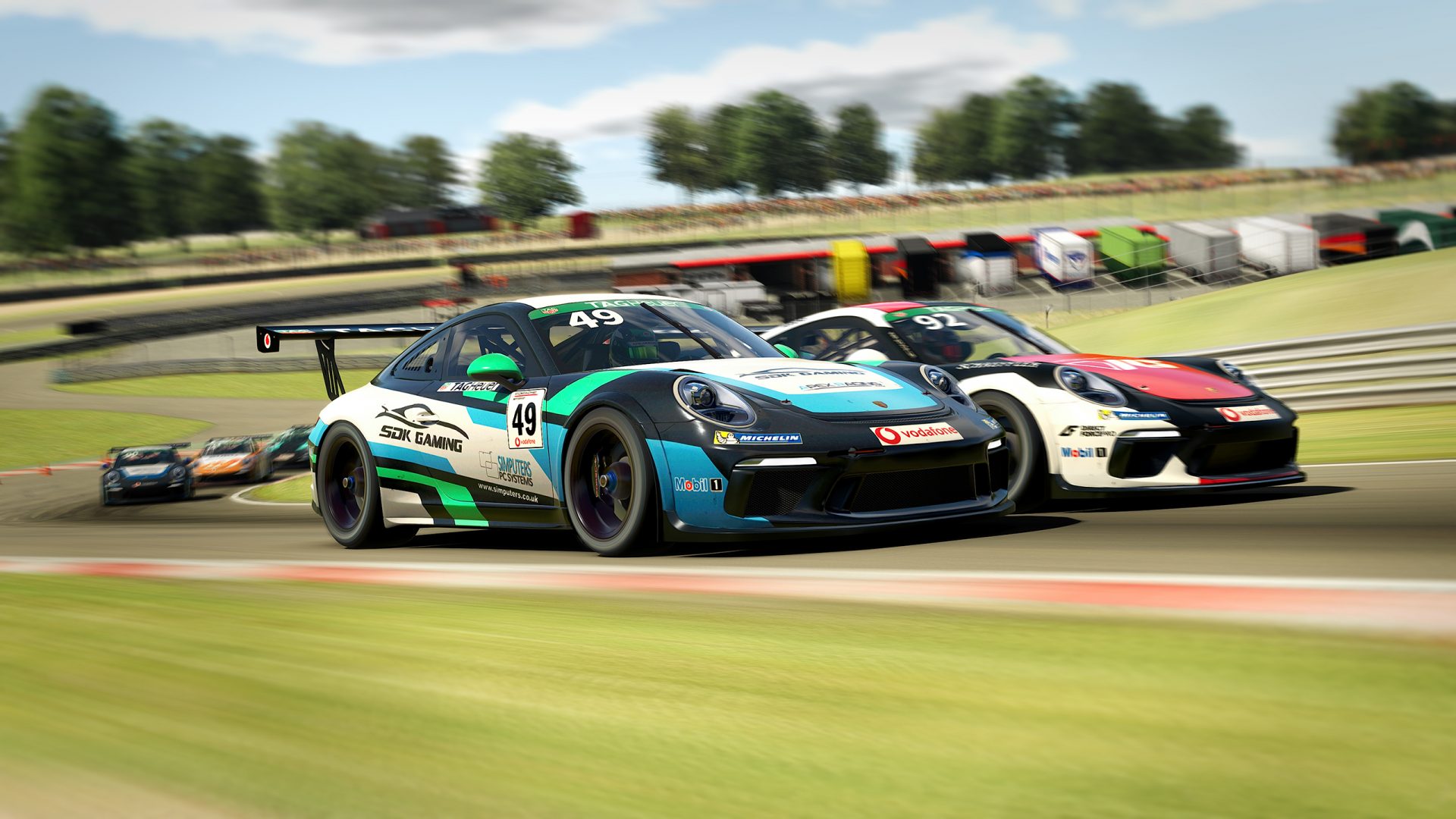 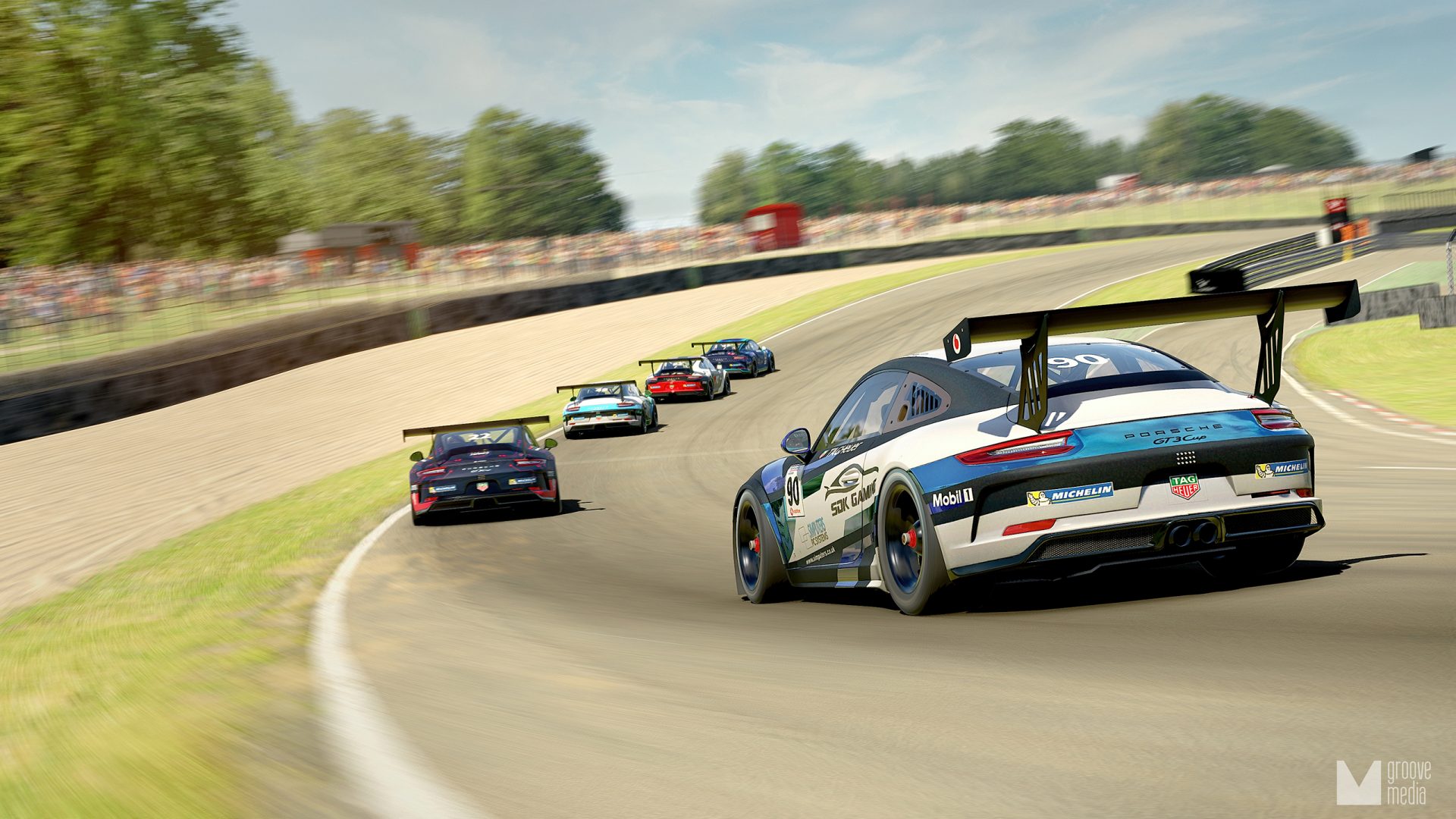 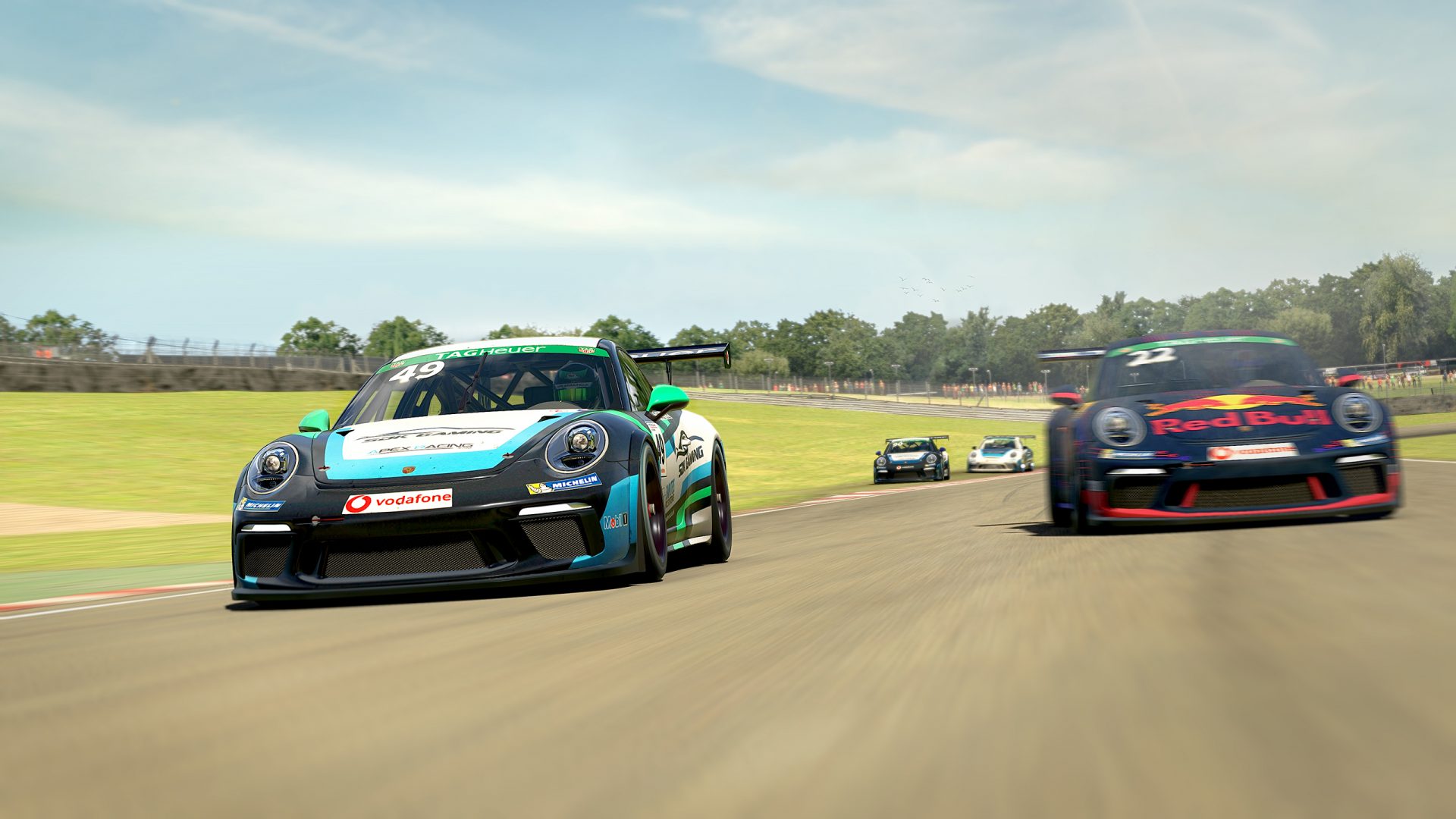 With the feature race grid set by the finishing order of the opening sprint race, ART drivers peppered the front four rows. Thirty minutes of ferocious racing with the world’s very best sim racers lay ahead of the Apex Racing Team aces.

For Jamie Fluke, it was another fantastic start. Applying immediate pressure to championship leader, Sebastian Job, Fluke sneaked by at Druids. After dispatching Job, Fluke set off in pursuit of Joshua Rogers and Alejandro Sanchez. With Rogers and Sanchez squabbling in front, Fluke wisely shadowed in third, awaiting an opportunity to capitalise. Meanwhile, Yohann Harth maintained fifth and Ellis Jr. moved up to seventh.

After 10 minutes, Rogers and Sanchez began to escape but Fluke held strong, keeping Sebastian Job at bay. However, with 18 minutes to go, the championship leader slipped by at Surtees. Despite losing out for the final spot on the podium, Fluke flawlessly eased home to a strong fourth place finish.

Maximillian Benecke needed to deploy every trick in his playbook to overcome Kevin Ellis Jr. at Sheene curve, with just 6 minutes remaining. Unperturbed, the tenacious Glaswegian refused to roll over, deploying counter moves throughout the following lap. For all the Apex Racing Team, it was a day of squaring up to the biggest names in sim racing. Nevertheless, a seventh-place finish brings a good haul of championship points for Ellis Jr.

Yohann Harth backed up a fifth place in the sprint race with a repeat in the feature, from fifth on the grid. A stellar performance.

On the 29th of August, the  Porsche Tag Heuer Esports Supercup will head to the glorious Spa Francorchamps circuit for round seven of the championship. Always a favourite with fans and drivers, this will not be one to miss.