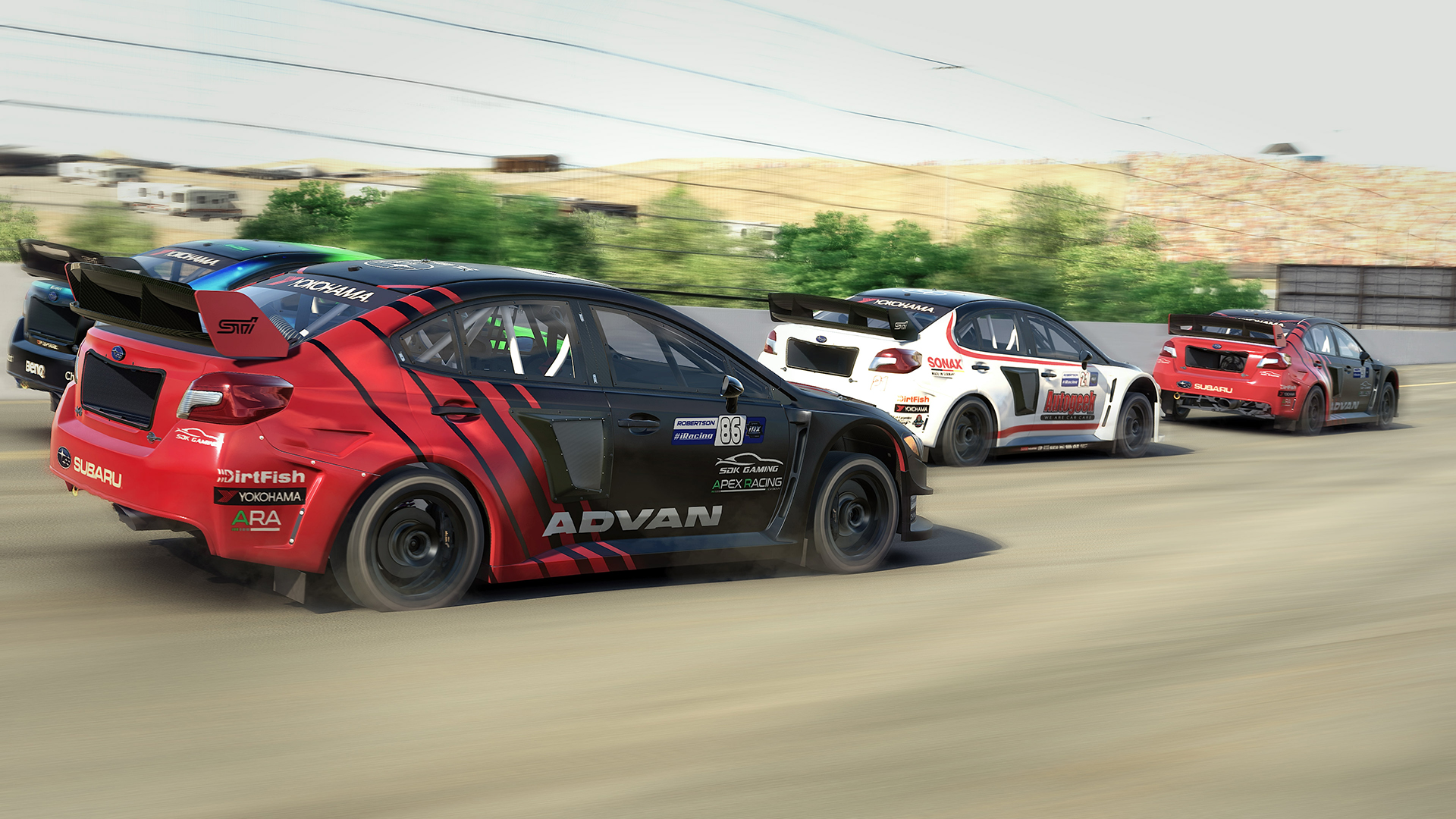 A vintage performance at Sonoma for Team Yokohama

Following a challenging day at Hell Lankebanen last week, Jon Robertson and Yohann Harth arrived at Sonoma with a score to settle. Situated in the heart of wine country, Sonoma raceway’s dusty rallycross circuit hosted the sixth round of the iRacing Rallycross World Championship.

Champion racers like Mario Andretti and Scott Pruett have switched steering wheels for grape presses in retirement. Both now produce their own range of wines in the vicinity of Sonoma. Pruett’s, in particular, are reassuringly expensive and special. A bottle of 2015 Championship Cuvee – produced to celebrate Pruett’s fifty years of racing – a cool $150 apiece.

However, Robertson and Harth’s sole focus on Sonoma soil centred around the 1.5km rallycross layout. After a difficult day at the last round, Robertson’s championship lead eroded to just seven points from the charging Mitchell de Jong.

Jake Robertson made a welcome return to the IRX World Championship, after missing last week’s round.

In qualifying, Yohann Harth proved his world class credentials on dirt by setting the second quickest time and securing pole position for his heat. Jon Robertson followed suit with the fourth quickest time. Just seven thousandths of a second shy of his elder brother, Jake Robertson qualified his Subaru in fifth place.

Jake Robertson enjoyed a clear view to turn one for the opening heat and capitalised beautifully. A perfect launch in his Gunma built machine gave IRX’s youngest driver the lead on lap one. Keen to press home his advantage, Robertson took to the joker lane and extended his lead. No one could lay a glove on Robertson and Apex Racing Team’s young star cruised to a commanding victory.

For the second heat of the event, Yohann Harth lined up on pole in the menacing red and black Advan Subaru. Harth bolted off the line and into an early lead. 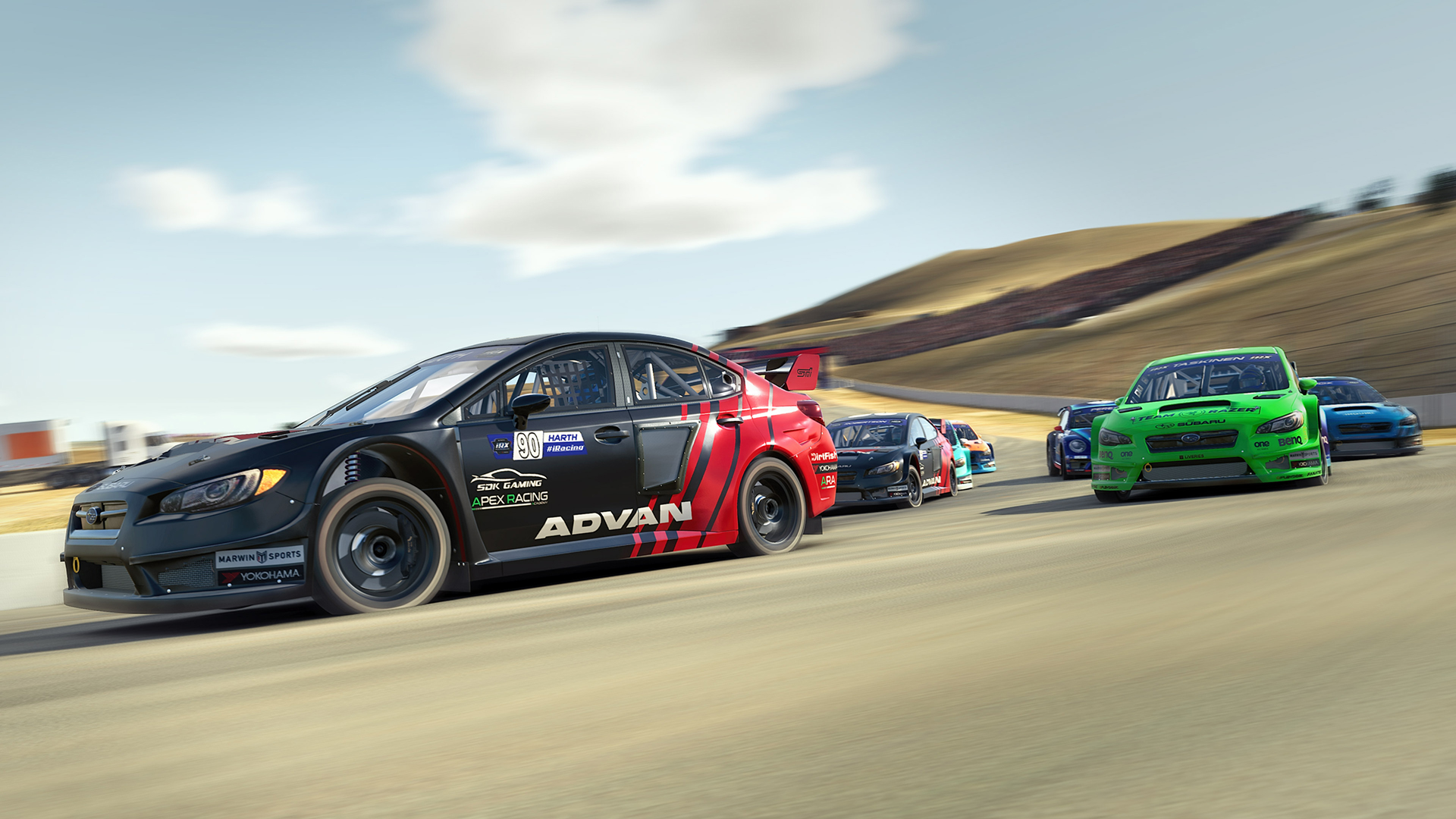 At the first opportunity, the Team Yokohama star completed the compulsory trip through the joker lane and emerged ahead of Jonne Ollikainen. Unperturbed by late race pressure from Ollikainen, Harth held strong and clinched the heat win and a front row spot for the feature.

Finally, it was Jon Robertson’s turn to assert his superiority as championship leader. Primed on pole position in his Advan Subaru, Robertson prepared for battle on the Sonoma soil. Emulating his Team Yokohama stablemate, Robertson took an early tour through the joker and cemented his lead. As his competitors battled behind, Robertson secured the heat victory and a ticket to the feature race. An ideal start to the day for the Aylesbury ace.

Lining up for the feature race, Yohann Harth and Jake Robertson started alongside Otto Taskinen on the front row. Jon Robertson sat immediately behind in his Advan Subaru, emblazed with the championship leader’s red windshield strip.

When the lights went out, Yohann Harth deployed a devastatingly quick launch and took the lead. However, Jon Robertson contended with the brawl ensuing in the pack. Upon landing from the opening jump, Robertson brushed the wall following contact with Otto Taskinen. Unflustered, Robertson responded immediately and overtook the Finn at the next corner.

Although running in different colours, Yohann Harth and Jake Robertson are Apex Racing Team brethren. Following two laps in third place, Jake Robertson lunged for the joker and surfaced inches ahead of Ollikainen. This exchange kept Ollikainen at bay and proved critical in Harth’s escape to victory.

Continuing his recovery from the earlier melee, Jon Robertson arrived in third position after his joker trip on lap four. Thus, forming a provisional Apex Racing Team one-two-three. Devastatingly, Jake Robertson incurred the wrath of the iRacing stewards. Forced to take a dreaded ‘slowdown’ penalty, the young Englishman dropped from second to fourth.

With four laps remaining, Jon Robertson faced a ferocious Jonne Ollikainen. If Robertson could hold off the Finn, a historic one-two for Team Yokohama was on the cards. 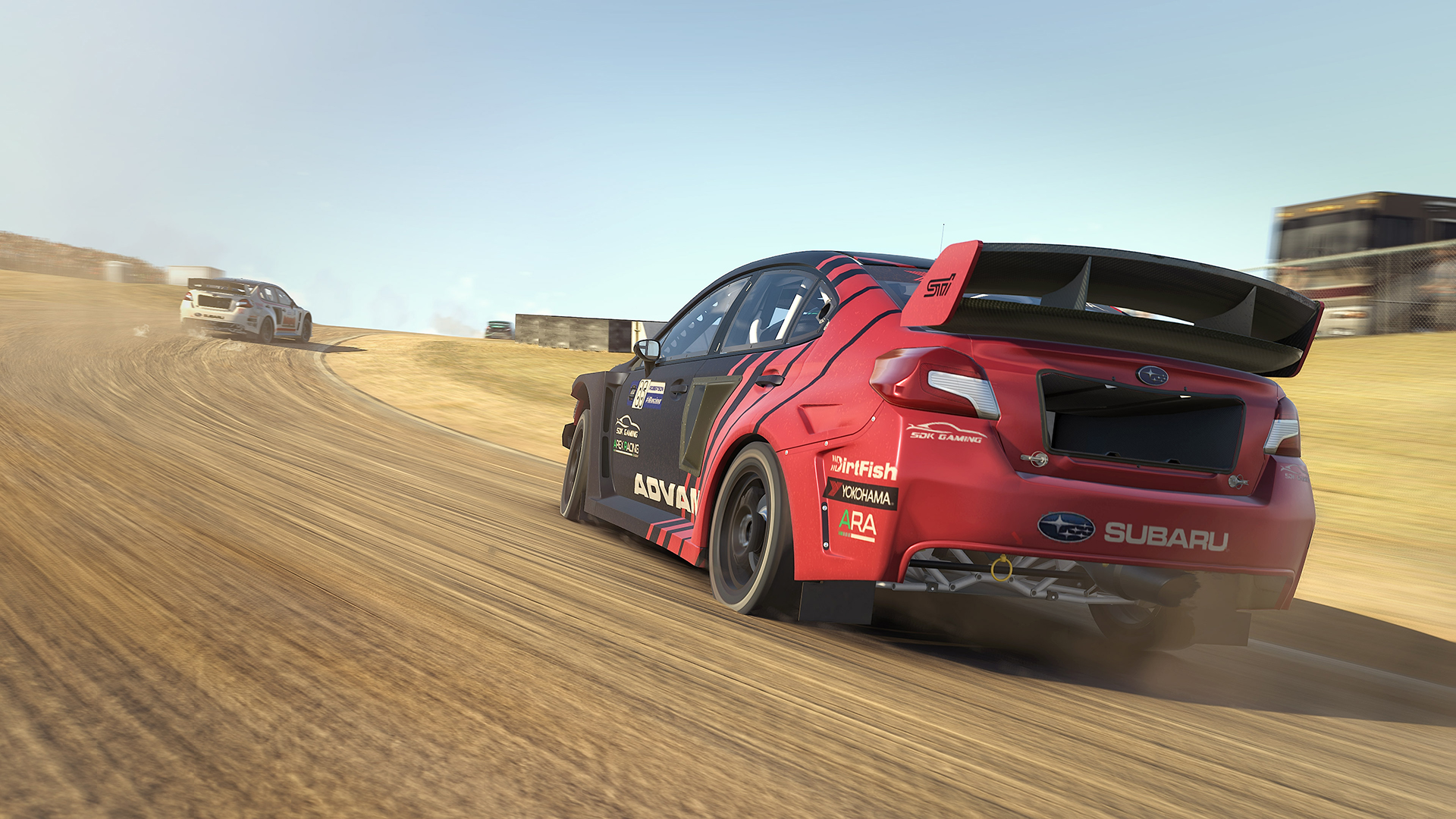 Robertson resisted the pressure of Ollikainen and followed Harth home. As the pair of Advan Subaru’s launched over the final jump, a one-two finish was confirmed. Although only weeks old, the alliance between the Yokohama rubber company and Apex Racing Team has yielded bountiful success. With three race victories and the top two spots in the championship standings, Team Yokohama sit in prime position for the race to the finish of the IRX World Championship.

In the aftermath of a red-letter day for the Apex Racing Team and Team Yokohama, the drivers gave their reactions:

Yohann Harth “A perfect way to bounce back after last week’s nightmare at Hell. I’m not really happy with qualifying, only second when the car was good enough for pole. Tommi Hallman – who was on pole – had a technical issue right before the start of his heat. Unfortunately, he missed the grid so I knew straightaway that as long as I won my heat, I’d be fighting for the win in the feature race. It was a good heat race for me, although I wasn’t really happy with my pace. But a win meant a front row starting position in the big race. In the feature, I got a perfect launch and took the lead in the first corner and never lost it again. I built a pretty big gap on the first lap and after all the guys behind took the joker, they all started fighting for second which helped me to pull away even more. I think I had a 2.5s gap to second on lap 6 so the last 5 laps were just a matter of bringing the car home. A superb job from everyone again this week. The second win of the season for me, the second 1-2 for Team Yokohama and we’re now leading the Championship by 70 points over SET Esports. Things are looking good for us in the team standings, but my target is the drivers Championship. I’m only 13 points behind Jon, 3 rounds left, the fight is on” 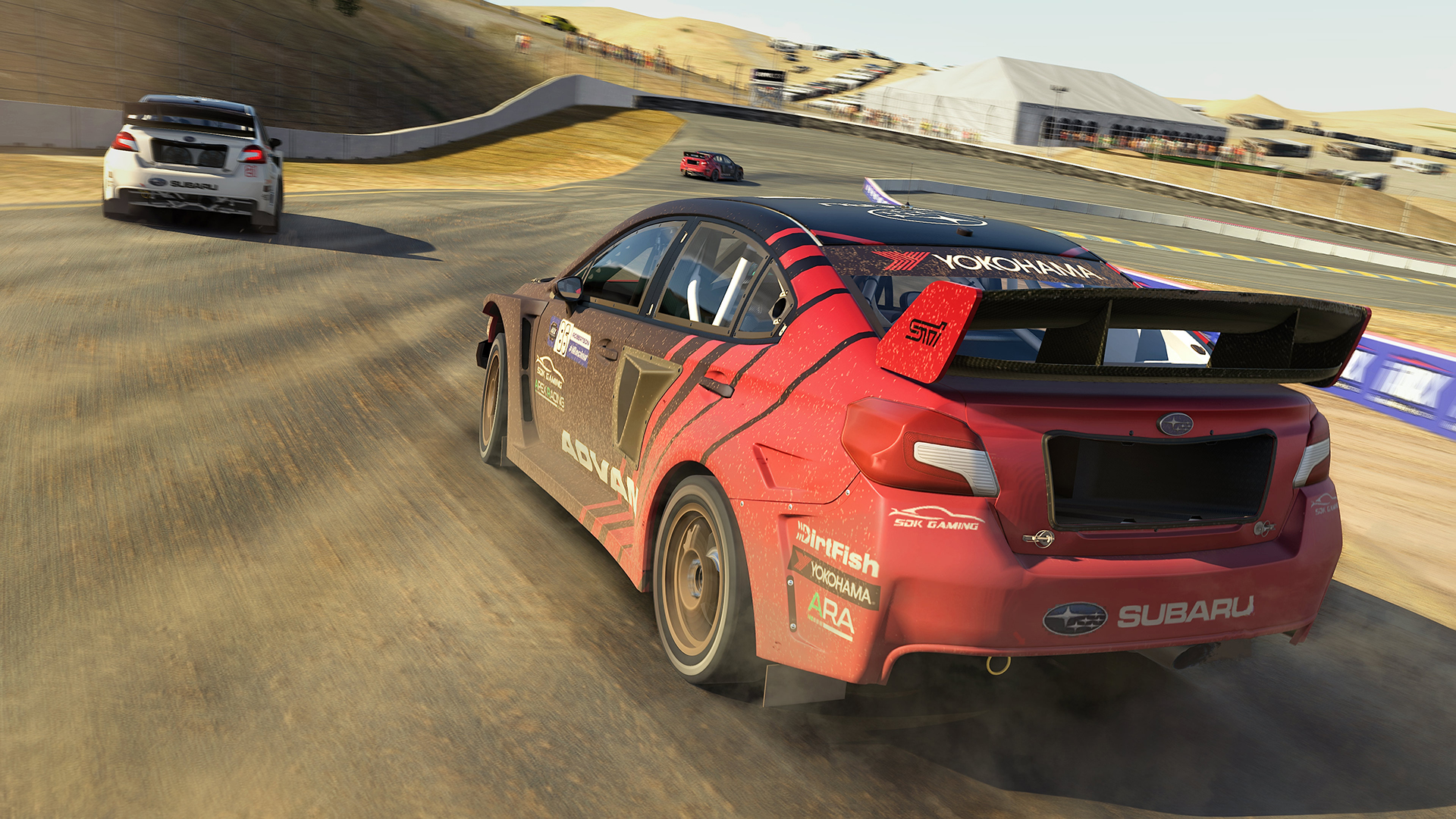 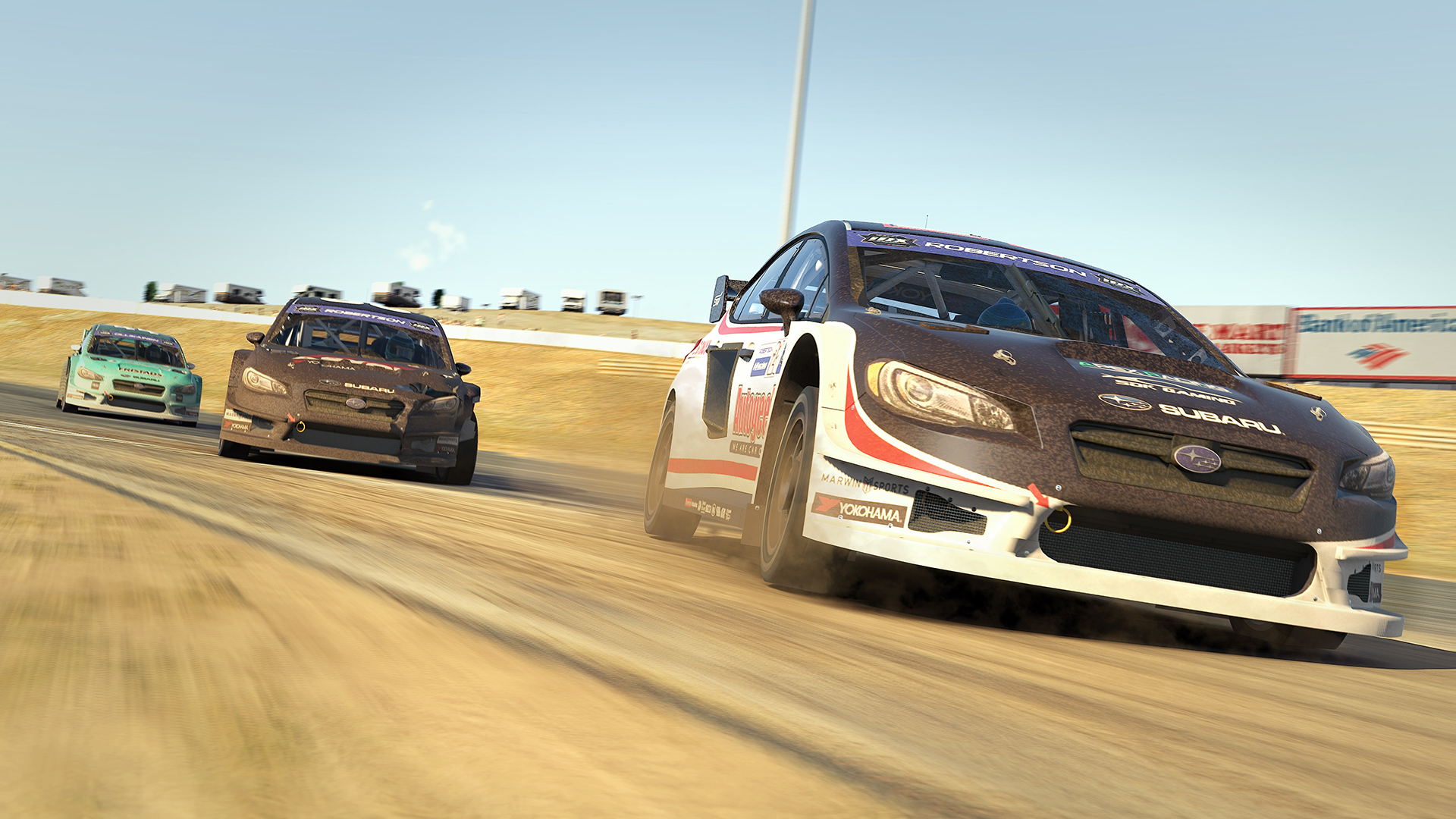 Jon Robertson: “Very happy with the end result from Sonoma. After a disappointing qualifying, I knew it would be difficult for me in the feature race. However, I kept my focus on the heat race. We hadn’t done much practice on a worn track so the first laps were very scary but I managed to clinch win. I started the feature from fourth and managed to make up a position in the first corner. However, some small contact pushed me back down to fifth with some minor damage. I got back into a rhythm and climbed up to second which was awesome considering the start to the race I had.”

Jake Robertson: “Sonoma is my favourite track out of the 9 rounds. So, coming into the round I knew I had competitive pace. My qualifying run wasn’t perfect but none the less I’m still happy with fifth. The polesitter in my heat had some technical issues which helped massively in winning the heat. In the feature, I wasn’t sure how my pace would look as I hadn’t practiced enough on a worn track so starting first was a little bit scary. A mistake led to a fourth place finish. However, I picked up some good points and a massive confidence boost going into next the next round at Lucas Oil!”

On the fourteenth of November, the iRX World Championship heads back home to Indiana and the Lucas Oil Raceway. How will Team Yokohama aces Jon Robertson and Yohann Harth fare in their Advan Subarus alongside Jake Robertson? Tune in to the Apex Racing TV You Tube channel to follow all the live action with the Apex Racing Team Feature Broadcast: https://youtu.be/shrmuwZf7qk 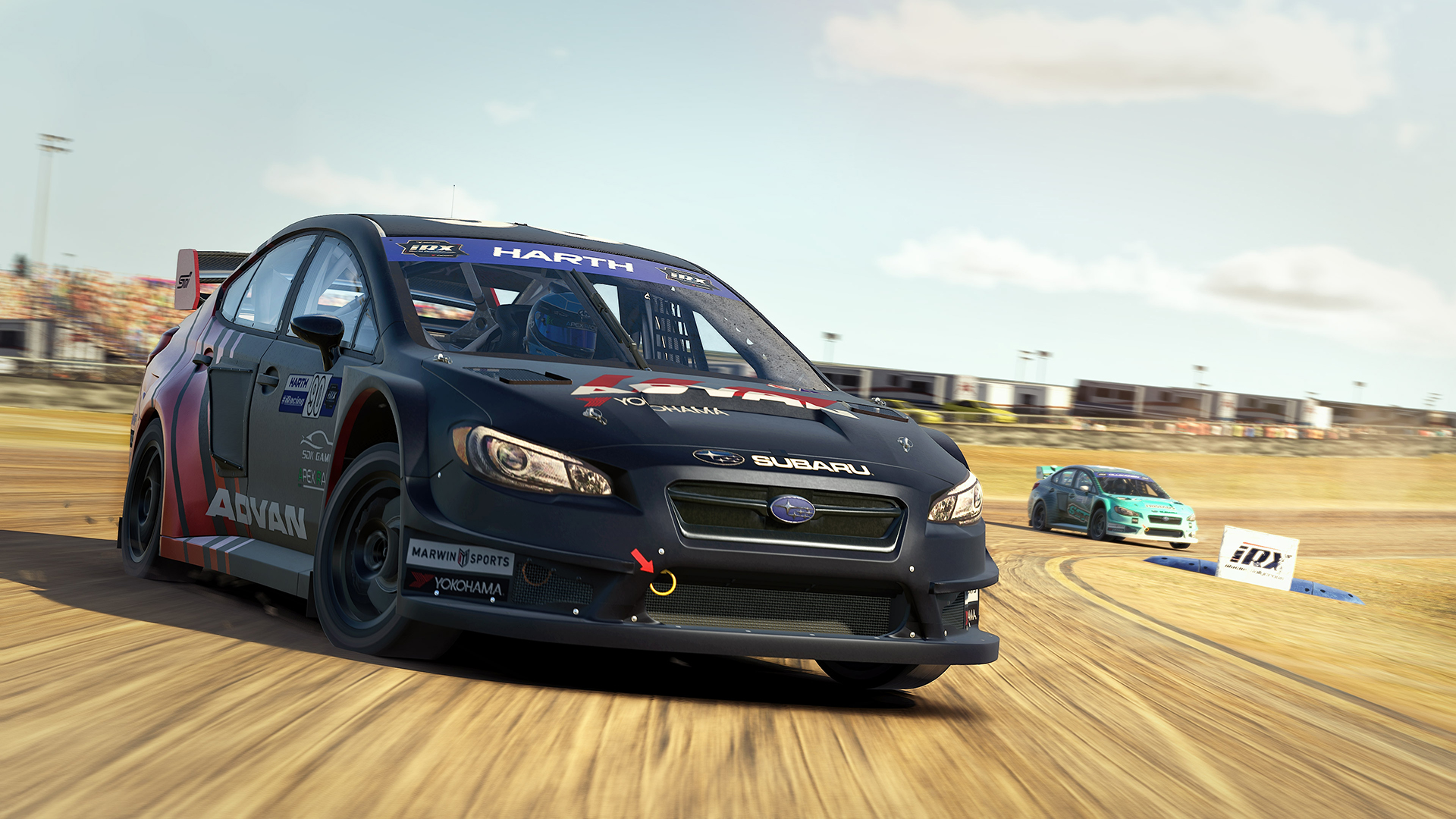