‘The World Center of Racing’ – Daytona International Speedway – hosted round two of the iRacing Rallycross World Championship (IRX). Following the uphill and down dale curves of Hell Lankebanen, Daytona’s billiard table flat rallycross course posed a whole new challenge to iRacing’s finest off-road drivers. An enormous, manmade, jump midway round the 1.38-kilometre layout is the only interruption of the circuit’s smooth topography. 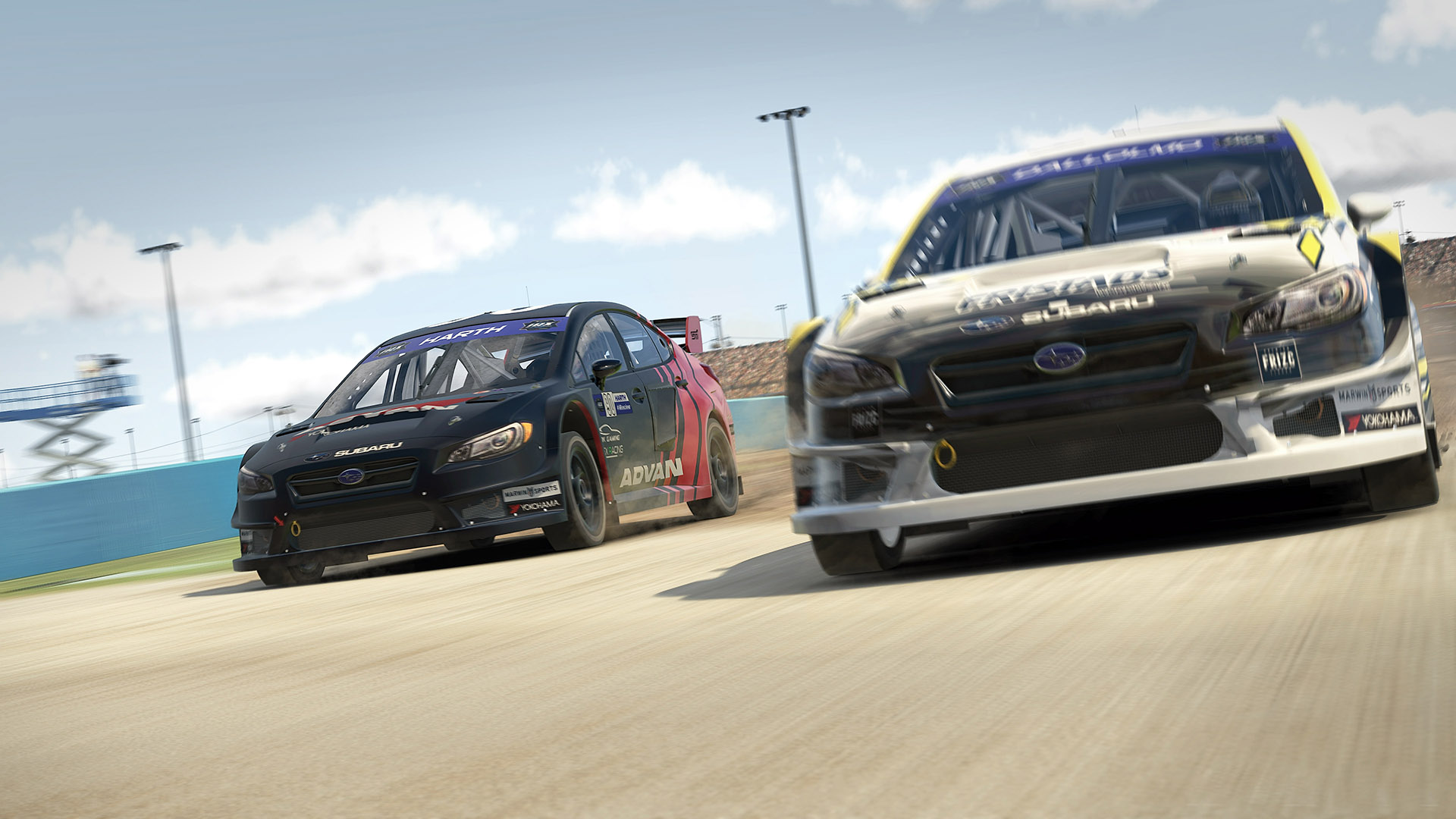 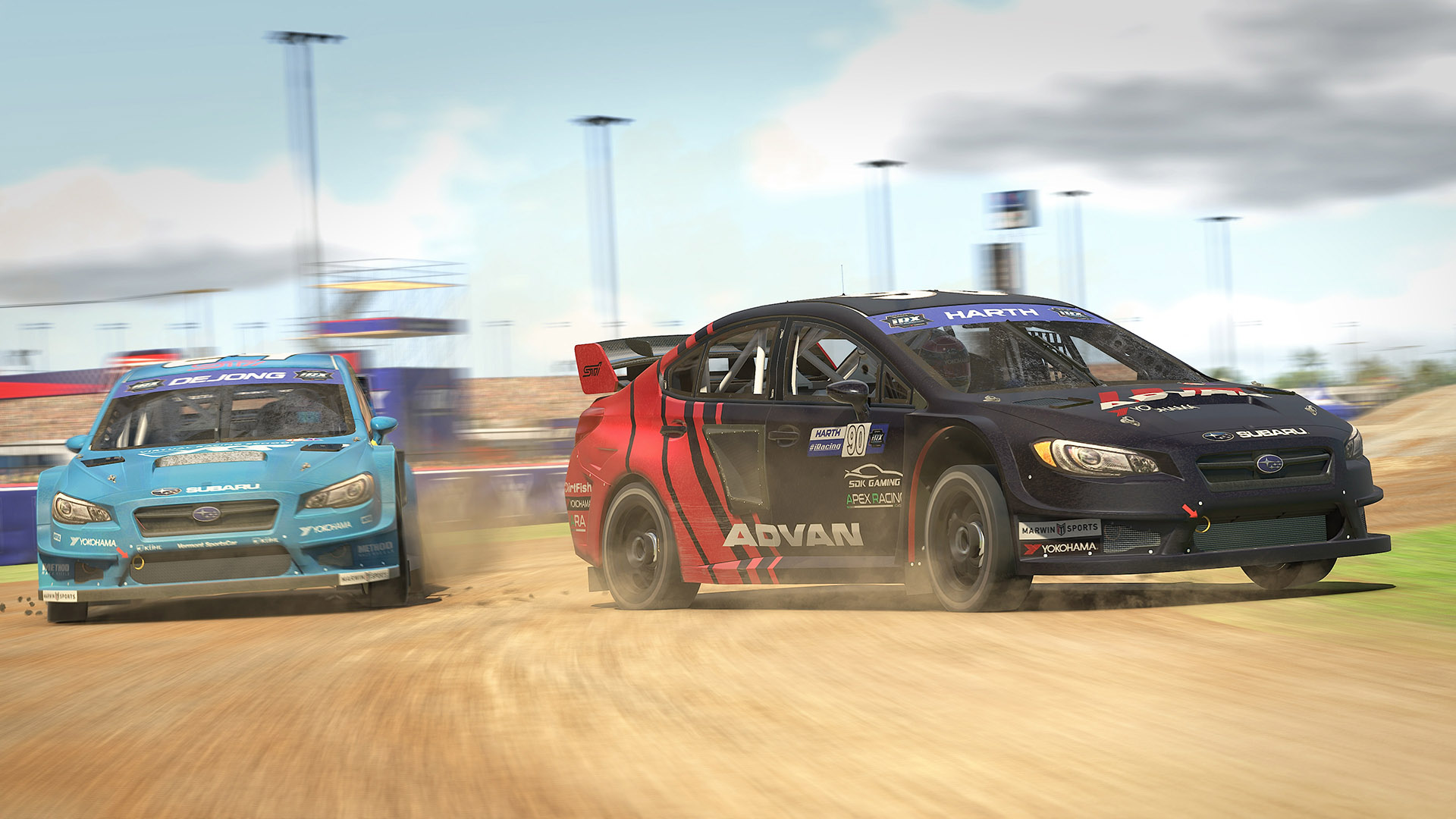 First up from the ART squad, was Jake Robertson. On secondment to Ed Carpenter racing, the young Briton was robbed of a result at Hell by other driver’s incidents. However, with a long season ahead, Robertson has plentiful opportunities to make amends. Starting from fourth on the grid, Robertson sat poised to launch his #21 Subaru into the first contest of the day.

Catapulting his Ed Carpenter Racing machine off the line, Robertson asserted second position into turn one. Unflustered, Robertson delayed his compulsory joker trip to the end. With approximately two seconds of advantage to be gained from the joker, Robertson enjoyed a comfortable hold on second place to the flag. By virtue of a fine second place finish, Robertson progressed automatically to the feature race. A perfect start to the day for the ART star.

Next up, was Yohann Harth. Following a frantic final round of the Tag Heuer Porsche Esports Supercup only hours before, Harth adapted beautifully to qualify his Subaru in second place. Unfortunately, Harth would be hampered by a five second penalty to his heat time, following an incident in the previous round.

Right from the off, Harth engaged full attack in his Advan Subaru. Unperturbed by the rough and tumble of IRX competition, Harth biffed back and forth with Killian Dall’Olmo for the lead.

ART’s fast Frenchman was in ferocious form. On lap four, Harth executed the move of the day. Overtaking Mitchell de Jong in mid-air over Daytona’s gigantic jump, Harth made the 2018 IRX champion look pedestrian and barged his way through.

Although second on the road, Harth’s penalty pushed the Yokohama backed driver back to fifth and into the last chance qualifier race. 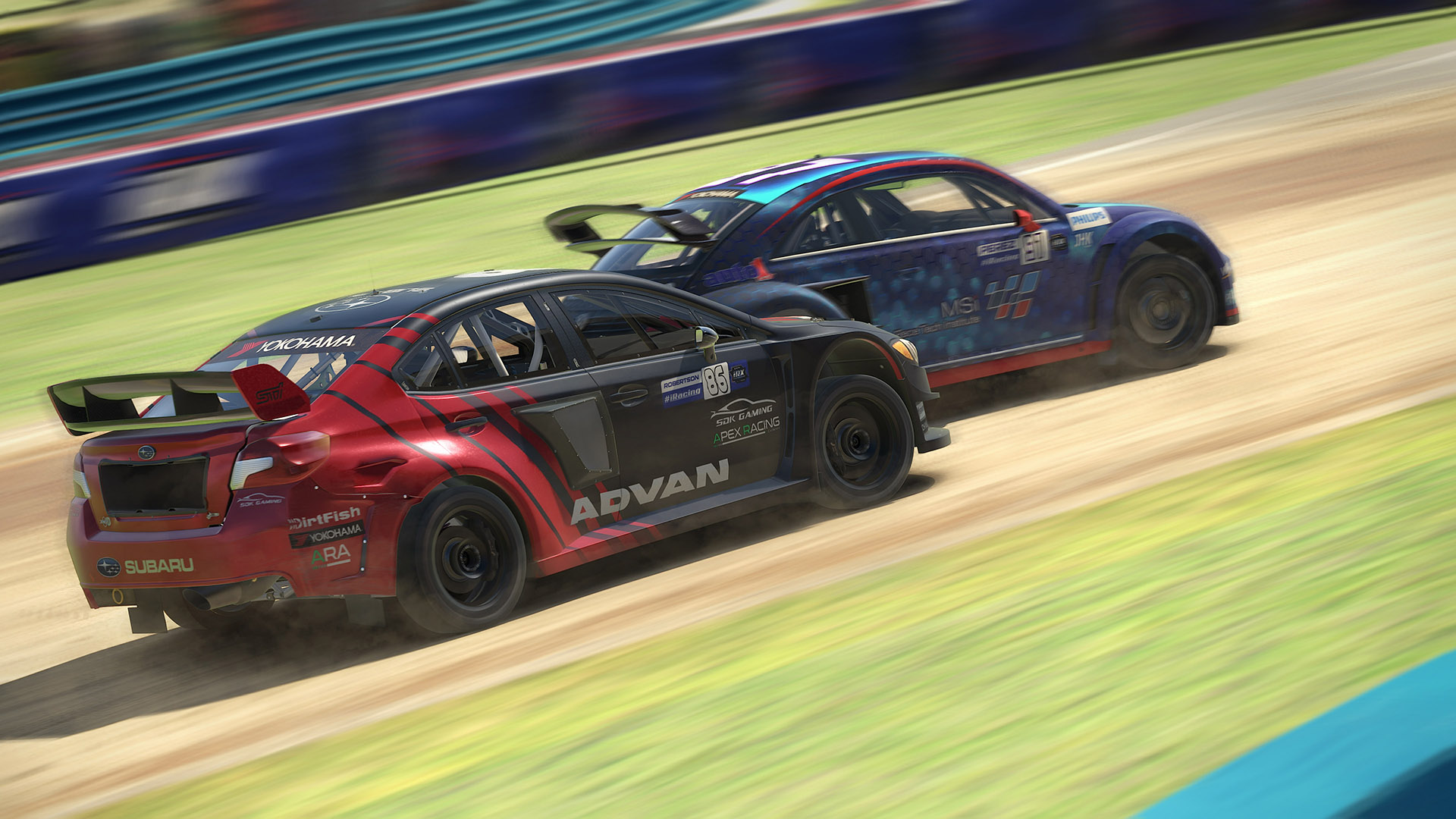 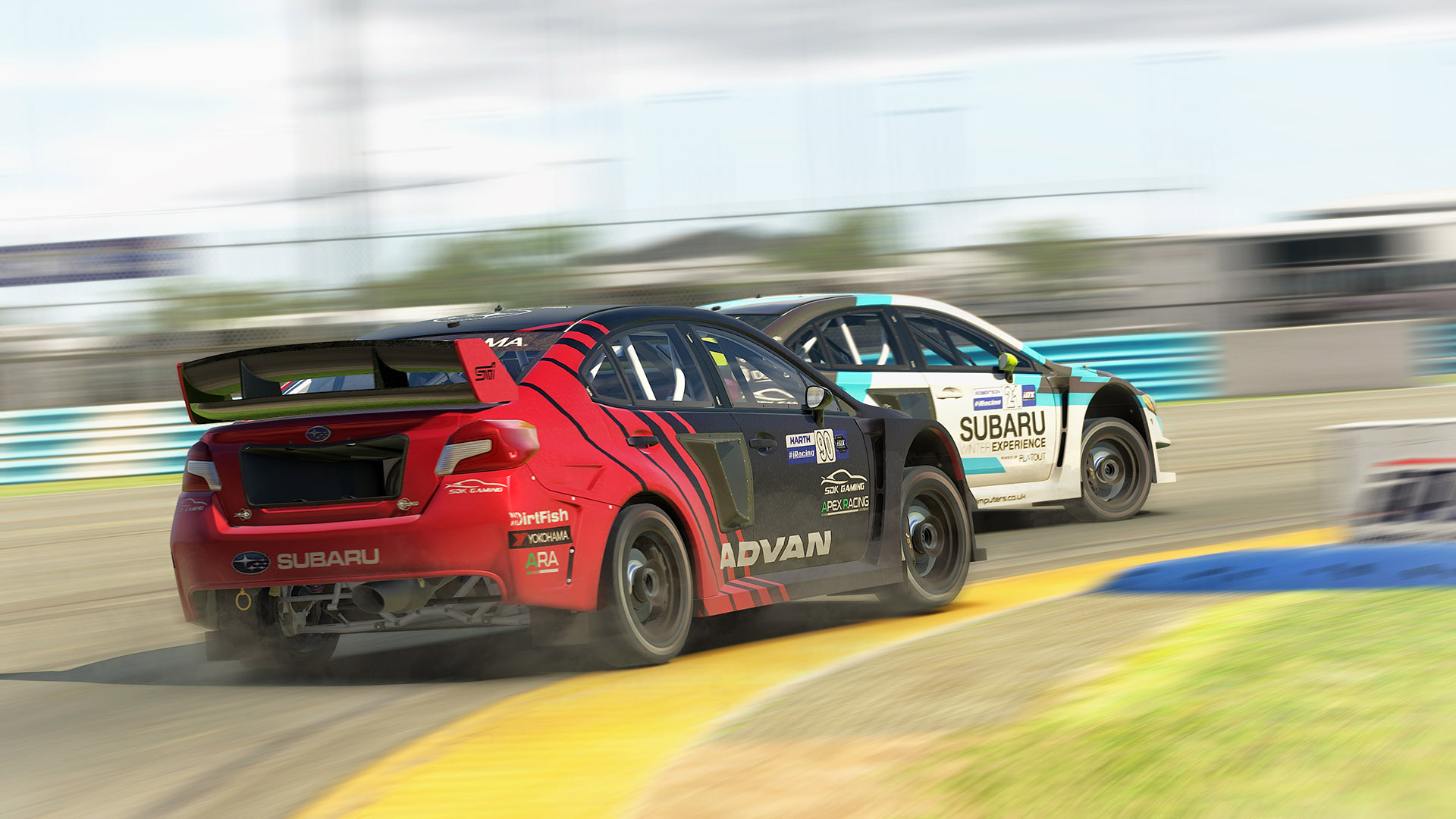 Jon Robertson lined up on pole position in his #86 Advan Subaru for the final heat. Executing the perfect launch, Robertson maintained the lead into the opening section. On lap two, Robertson opted to head for the joker lane and clinch vital track position. However, a slightly clumsy bump from Beau Albert’s Beetle sent Robertson’s Subaru into the barrier.

Nevertheless, Robertson refused to retreat. As the Advan Subaru ace tenaciously tussled his way through to second, Robertson’s competitors bickered behind him. As a result, Robertson claimed second place on the road behind Garrett Manes. However, a five second penalty for Manes promoted Robertson to a hard-fought win and a prized spot in the feature race.

Yohann Harth started from fifth on the grid for the last chance qualifier. The French star would need to draw upon all his masterful race craft to pinch a spot in the feature race.

Wasting no time at all, Harth barged through to the lead past de Jong and Parise. Further back, the chasing pack engaged in a vicious brawl, allowing Harth to escape to the win in his Advan Subaru. With a five second penalty casting a shadow on Harth heading into Daytona, the ART superstar upset the odds to fight his way into the feature race.

During a frenzied set of heat races, all three ART stars fought their way through to the vital feature race. Jon Robertson lined up fourth in the #86 Advan Subaru, with younger brother Jake, immediately behind. Yet again, Yohann Harth faced an uphill battle and started from the back. 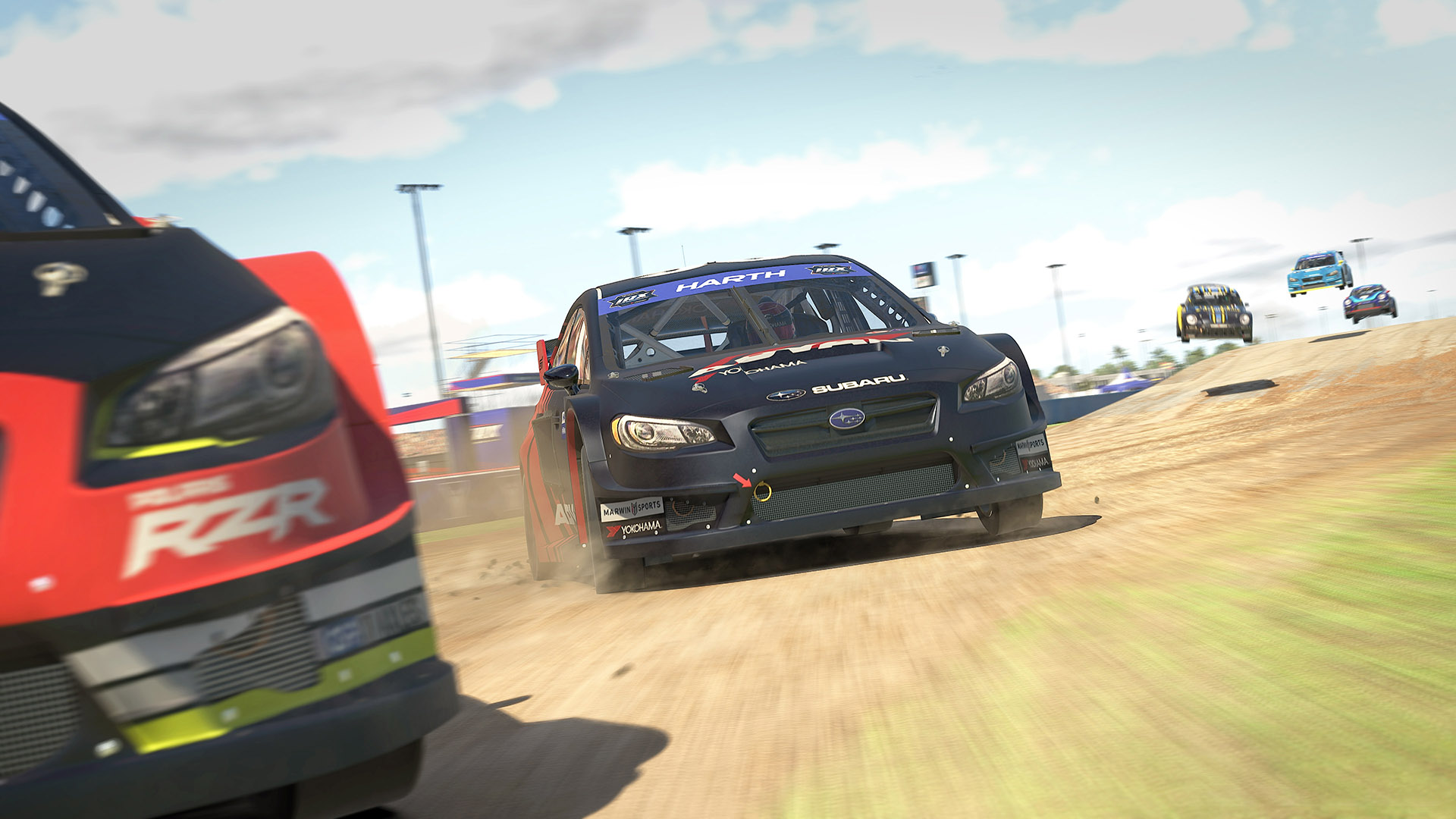 Jake Robertson was in feisty mood and refused to repeat the disappointment of Hell Lankebanen. Killian Dall’Olmo attempted to slip around the outside of Jake’s Subaru but received no courtesy at all from the rapid rookie. Meanwhile, elder brother, Jon Robertson sped into second place in his Advan Subaru.

Unfortunately, a slight error from Jake Robertson dropped the Brit into the clutches of Salas and Heikkinen and hindered the ART ace’s progress.

Yohann Harth continued his meteoric charge through the pack to fifth place. Furthermore, the fast Frenchman still had his joker to play.

Jon Robertson kept his swift tour through the joker lane until the very last lap. Running in third place, Robertson narrowly missed out on edging Ollikainen and Hallman to the line. However, a third career podium finish left the Advan Subaru star with much cause for celebration.

Fourth place for Yohann Harth from the back of the grid proved, yet again, that the Frenchman will be a force to be reckoned with throughout the season. Jake Robertson signed off on a strong day at Daytona in seventh place. 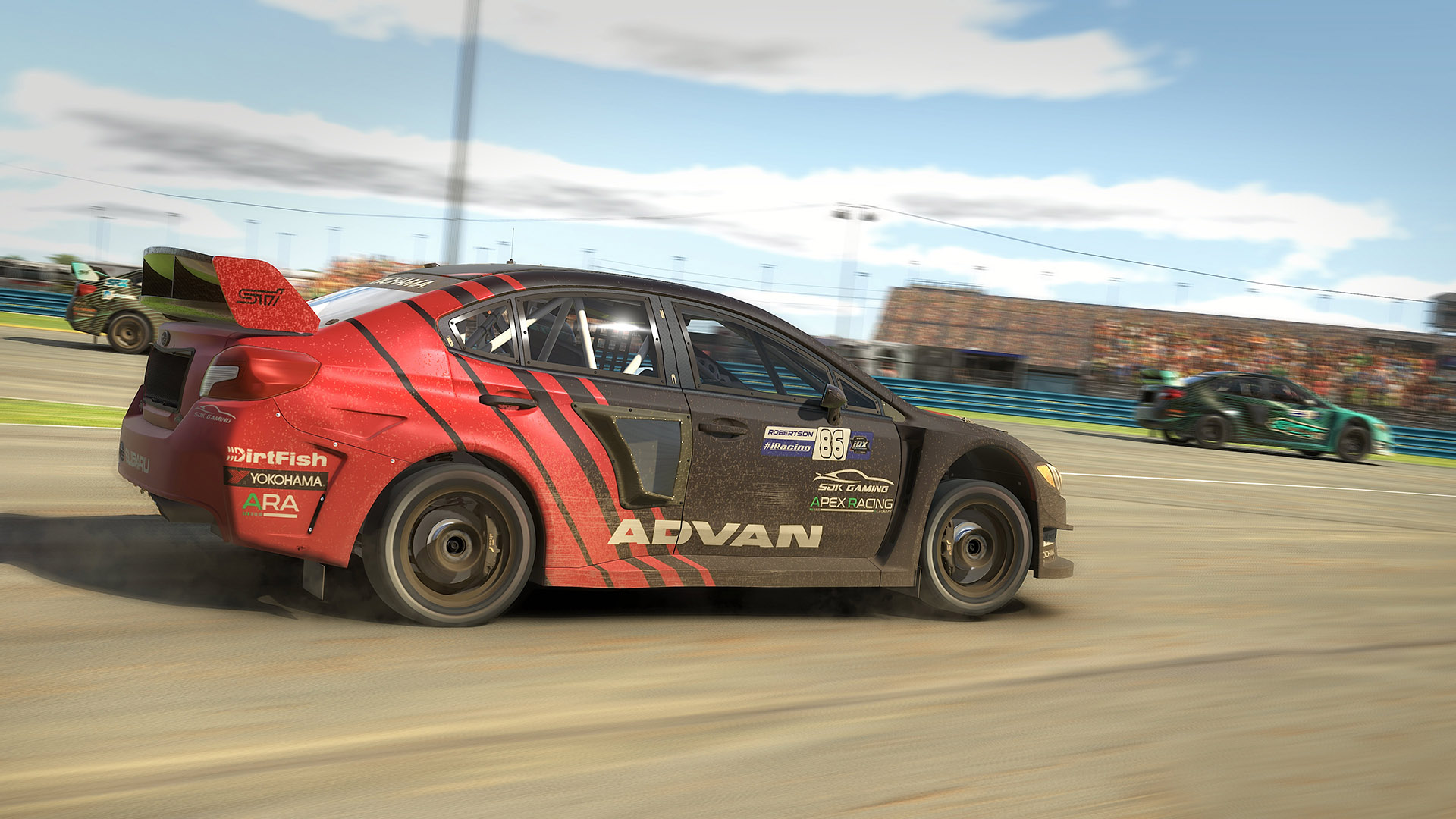 Following a busy day at Daytona, the ART crew shared their thoughts:

Yohann Harth: “Coming into this round, I knew I’d need a lot of luck to make it into the Feature race, as I had a five second penalty waiting for me at the end of my Heat Race. I’m not really happy with my qualifying lap but it was still good enough for sixth. From there, it was all about aggression and luck and everything went my way today. I managed to qualify for the Feature from fifth on the grid in my consolation race. Then I went from tenth to fourth in the Feature. It’s a shame that Jon didn’t manage to win it but it still a super solid result for Team Yokohama with a double Top 5. I’m finished with the Porsche TAG Heuer Esports Supercup now, so I’ll have a lot more time to dedicate to iRX. I’m looking forward to Round 3 at Atlanta.”

Jon Robertson: “I had another decent qualifying performance which meant I scraped into the top 4 and started my heat on pole. As with last round, I had more to give in qualifying, but couldn’t put together an ideal lap. After a good start in the heat, a small mistake cost me first and put me back into the pack. I opted for my joker on lap one but got punted under braking. Dropping me further down the order to fourth. Despite feeling that my heat was over, I carried on and managed to claw my way back up to second, ultimately finishing first after post-race penalties. The feature was quite uneventful in comparison to the heat. I jumped up from fourth to second on the run to turn one. Tommi took the joker from third ahead of me but I stayed out to hunt down the leader. A few mistakes cost me valuable time and left me third by the end of the race. Overall, it was a great round but there’s lots to reflect on over the next week before we go to Atlanta.”

Jake Robertson: “After the last round at Hell, I knew I needed a good result to keep my foot in the door in the standings. Qualifying didn’t go as well as I’d hoped and I started fourth in the first heat. I managed to use the leader’s car to come out of the first corner in second place and after some luck I had a relatively large gap behind me. Thus, securing a second place finish and a transfer to the feature. In the feature, I hoped for a top five finish. After a few mistakes on the opening laps, I found myself in seventh. It’s maybe not the feature result I wanted, but I’m still very happy to have made the feature. A few things to work on during the week for round three at Atlanta so we can get another good result!” 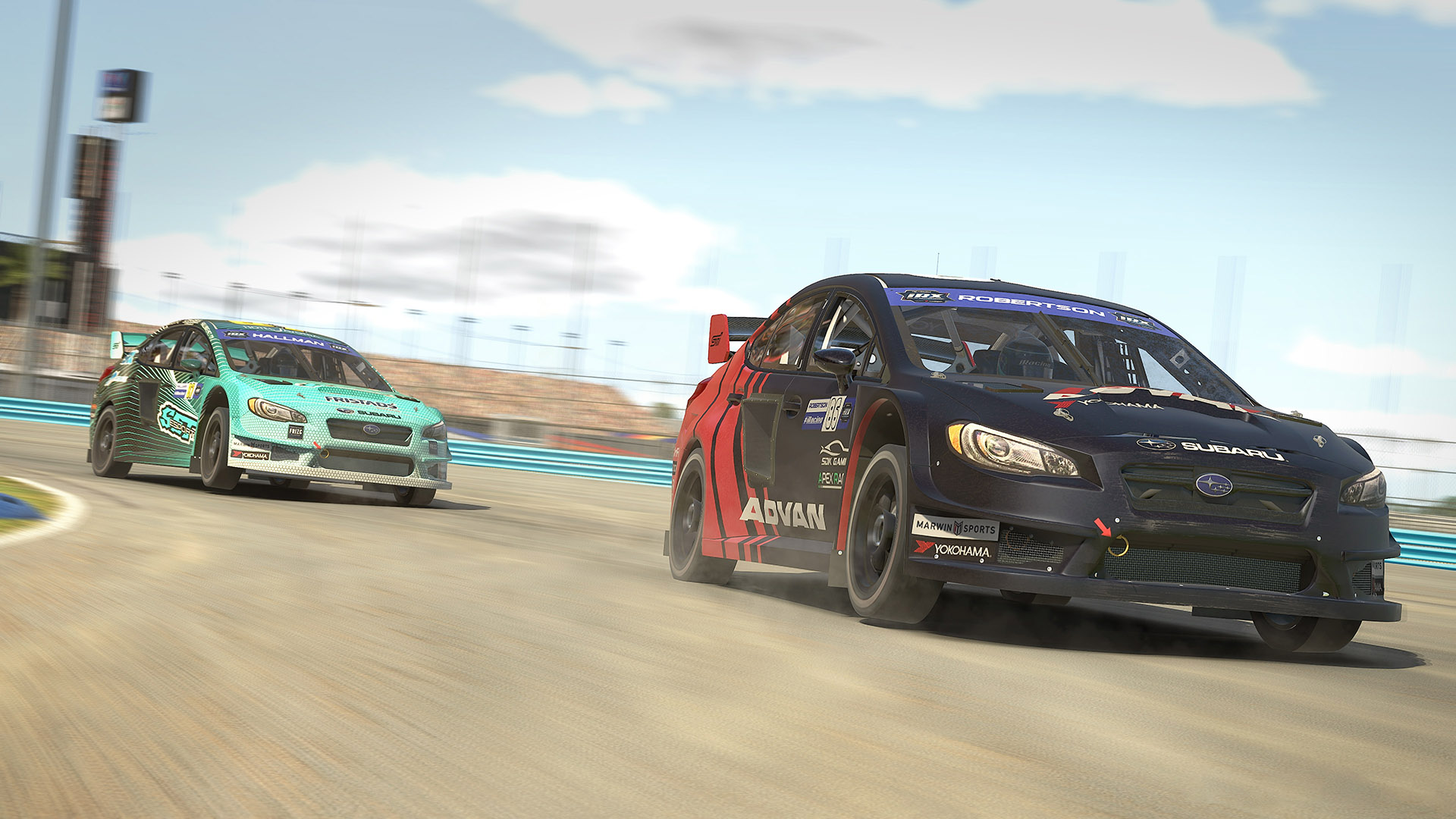